Turner Motorsport, a company known for their racing program and high-performance vehicles, takes a foray into the land of electric vehicles. Recently the Massachusetts-based company took ownership of BMW’s latest electric vehicle: ActiveE. Often labeled as the last step before “a real electric BMW”, the ActiveE is a full conversion EV based on the 1 Series Coupe and it is currently offered as a lease to selected customers in the United States.

Turner is first BMW tuner with a BMW electric car and many have wondered what their plans are with the ActiveE. “We are doing this to try to keep on the cutting edge of automobile and BMW technology, says Jay Baier, Director of Marketing for Tuner. “We have this project car to “test the waters” to be ready for the release of new electric vehicles in the future. We want to have a step up in this area.”

So why an Electric Car? Simple really. At Turner we pride ourselves on being on the cutting edge of performance and technology for BMWs. Alternative sources of energy are the future and we want to make sure we have a jump start on the things to come. We want to have an understanding of these cars to secure our future as a leading BMW tuner. We chose to be a part of this pilot program with BMW to experience firsthand what it’s like to have a BMW that is 100% electric that does not rely on ANY fossil fuels. We want to get a sense of what it’s like to drive this car as a daily driver to see the positive as well as see where it can be improved. This car is unlike anything we have ever worked on, built, or raced and that is exciting.

The ActiveE 1 Series is an E82 chassis with an electric power plant consisting of a 32 Kwh lithium ion battery pack which powers a 125 kW (168hp and 184 ft-lbs) electric synchronous motor within the rear axles to power the rear wheels. This motor powers the 4,000 lb car from 0-60 in 8.5 seconds. The ActiveE 1 Series weights approximately 800 lbs more than a E82 135i but has a 50:50 weight distribution front to rear.

The ActiveE program is a test program set up by BMW to field test these vehicles. The testing will include 700 vehicles, 200 which have already been leased as of February 2012.

Here you’ll find information, articles and news on our Project ActiveE 1 Series. You’ll also find photos, galleries, and video clips of our ActiveE as we capture them (coming soon!).

No exhaust pipe, no engine noise, and no vibration. The first drive in this car was very strange to say the least. Open the door, interior looks like that of any standard 1 Series, sit in the seat, still not much difference from a 1 Series. Then look closer at the gauge cluster and you will notice there is no tachometer and the speedometer only reads to 110 mph. Look closer and you will find a button labeled “ECO PRO” behind the shift lever. Then you notice the white interior trim with the text; ActiveE. Then it starts to become evident that this is no normal car.

Push the key in and press the on off button and wait…..nothing but a couple lights come on and the car is ready to drive. Put the gear lever into drive and hit the gas and your off. The torque of the electric motor is surprisingly strong down low and the seamless acceleration is also something completely new to us. From 0 all the way up to 95mph there is absolutely no shifting of gears. 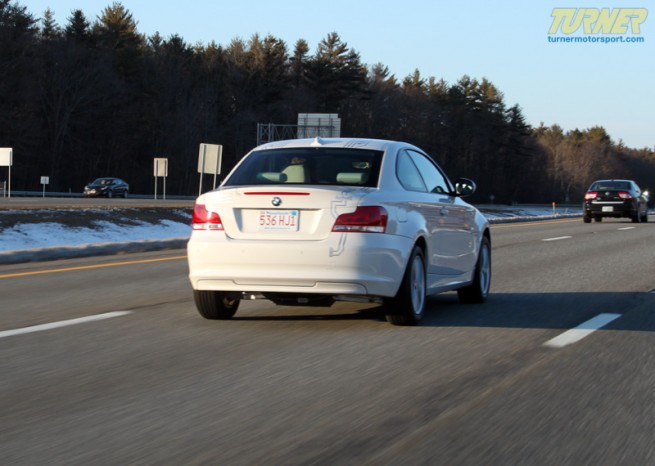 Since we picked up the ActiveE back in March we have been brainstorming ways to turnerize the car from different graphics to crazy wheels and tires to aero modifications. Since the car has primarily been Will Turner’s daily driver for his commute to and from work he had to give it the racecar feel. The logical place to start for a car that has no conventional motor to play with was the suspension. We decided to go with a Bilstein PSS10 coilover system for the E82 chassis. The install was for the most part the same as the conventional E82 1 series except for a couple small differences. The first difference is the half inch aluminum spacers in the strut towers. The second is accessing the rear shock tower mounts, much more involved since the electric motor is rear mounted.

Another big difference between this ActiveE and a 128i or 135i is that it weighs 800 pounds more. This obviously has an effect on how the car handles and drives. We knew this would also effect the stance and ride height of these coilovers. We adjusted the PSS10s accordingly to give the car the correct ride height with the additional weight. After we got the ride height set we took the car for its maiden voyage with the new suspension. WOW did it make a difference.

After pulling out of the parking lot it was apparent the coilovers made a huge difference over the stock suspension setup. The car felt planted and somewhat more playful. The Bilstein’s somewhat stiffer ride and lower height gave the car something it was missing before, a feeling that made you not want to lift off the accelerator pedal. Not to say that the Bilsteins made the car better in any way, but they do make the ActiveE feel like a proper Turner Motorsport project car. They give it a racier feel; Exactly what Will Turner is looking for.

The additional weight? Yes its still there but its less noticeable with less body roll when cornering and less weight transfer when under hard braking. When cornering at high speeds you can feel the weight through the steering wheel, you can feel the outside tires begin to lean over but they hold the car feels surprisingly good despite the huge amount of extra weight. Overall the coilovers are a huge improvement in an effort to make this electric car a Turner project car. They give the car a bit more excitement and playfulness. It will be interesting to see the effects on kw/mile with the larger heavier wheels and lower suspension. We will keep you updated.