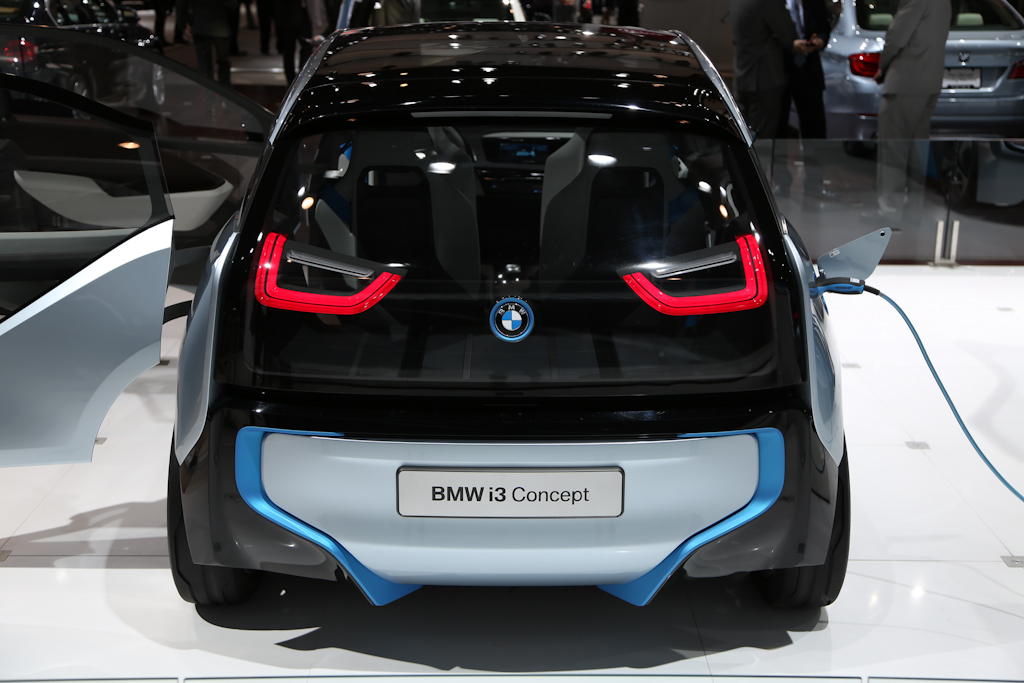 BMW’s i3 pales in comparison when parked beside the gloriously penned i8 – but not in importance. In fact, it’s easy to argue that the i3 in fact pales the i8’s importance from a market standpoint. Surely, the i3 will go on to be found in many driveways, unlike the exclusive and pricy i8 eco-supercar.

BMW’s i3 will be built upon a Carbon Fiber passenger cell, with aluminum front and rear subframes affixed. Aside from electricity production – the i3 will be emission free while driving.

Charge time is expected to take approximately 6 hours, offering a range of up to 100 miles on a single charge. This, according to extensive research completed by BMW, is adequate to accommodate the daily commute of the vast majority of most drivers. 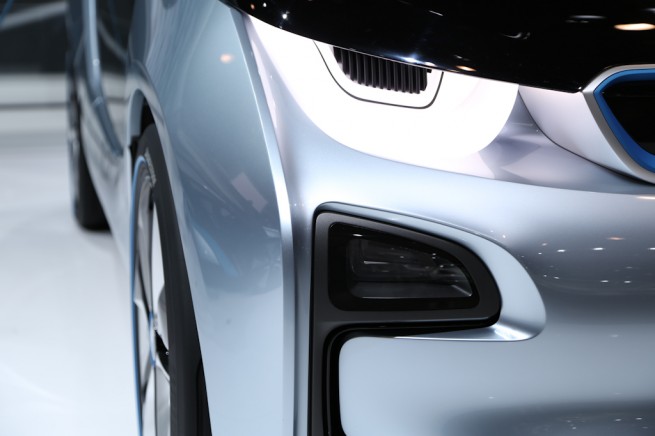 “The BMW i3 Concept is an uncompromisingly sustainable vehicle designed for urban areas. Driven purely by electric power and purpose-built to meet the demands of sustainable and emission-free mobility, it embodies an intelligent form of urban transportation and commuting. The BMW i3 is a well-resolved all-round concept, with every detail conceived and optimised to fulfil its eventual purpose. Its innovative LifeDrive architecture renders the BMW i3 Concept light, safe, spacious and dynamic. Innovative use of materials and intelligent lightweight design, moreover, not only enable the i3 Concept to travel long distances on a single charge and provide superb safety in the event of a collision, they also help give the car its excellent driving dynamics.

The electric motor over the rear axle – which generates output of 125 kW/170 hp and impressive torque of 250 Nm (184 lb-ft) from a standstill – and a small turning circle combine to deliver pleasingly crisp driving characteristics. The BMW i3 Concept accelerates from 0 to 60 km/h (37 mph) in under four seconds and from rest to 100 km/h (62 mph) in less than eight seconds. 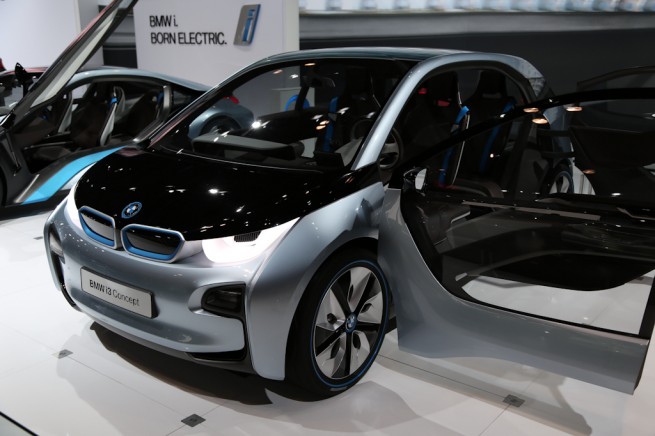 The so-called Life module conjures up a feeling of space inside the car more generous than even the latest conversion vehicles can offer. Select materials lend the open and airy cabin a lounge-like character. The use of renewable raw materials is another defining characteristic of the interior, offering passengers a further means of “experiencing” the sustainability of the vehicle.

Parts of the instrument panel and door panelling are visibly made from natural fibres, while the naturally tanned leather of the seats creates a lounge-style ambience. With four seats, wide-opening opposing “coach” doors, a boot capacity of around 200 litres and an additional functional compartment in the front, the BMW i3 Concept is neatly equipped for the demands of everyday use.

Innovative connectivity functions create a seamless connection between the BMW i3 Concept and its customers’ lives outside the car. Remote functions accessible via a smartphone enable owners to find their vehicles, flag up nearby charging stations, allow battery charging and preconditioning at the touch of a button, and supply information on the current status of the vehicle. Meanwhile, intelligent assistance systems ease the stress on drivers in monotonous city driving situations and allow them to arrive at their destination more safely and in a more relaxed state of mind. 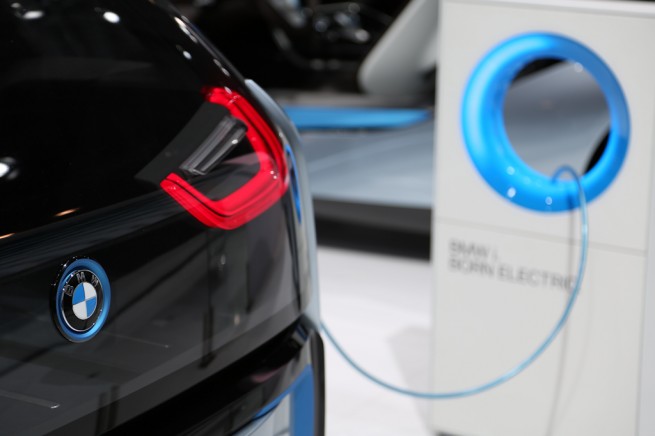 The LifeDrive architecture of the BMW i3 Concept.

Both the BMW i3 Concept and the BMW i8 Concept feature the LifeDrive architecture, but the geometric implementation of the concept differs in the two models, having been adapted to suit their different usages. The BMW i3 Concept features a horizontal-split variant of the LifeDrive concept. Here, the Drive module provides the solid foundations for the Life cell, which is simply mounted on top. The reason for this functional rendition of the LifeDrive architecture is the large battery. In order to ensure the greatest possible electric range, the battery in the BMW i3 Concept is correspondingly large. The most space-efficient place to store the battery cells was in the car’s underfloor section, where they occupy the whole of the module’s central section, giving the car optimum weight distribution and a low centre of gravity.

The battery is penned in by aluminium profiles, which protect it from external impacts. Crash-active structures in front and behind it provide the necessary energy absorption in the event of a front- or rear-end collision. The electric drive system is, as a whole, much more compact than a comparable combustion engine, cleverly accommodating the electric motor, gear assembly and drive electronics – in space-saving fashion – within a small area over the driven rear axle. The BMW i3 Concept therefore features the optimum LifeDrive architecture configuration for a purely electric vehicle. 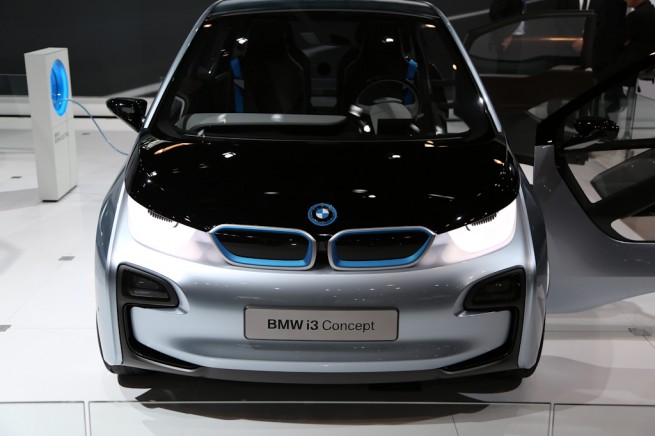 The integration of all the drive components within the Drive module removes the need for a centre tunnel bisecting the interior, through which power would previously have been transferred to the rear wheels. The BMW i3 Concept therefore offers significantly more interior space than other vehicles with the same wheelbase and – through solutions such as a full-width seat bench –
also allows the interior to be adapted extremely effectively to the needs of urban mobility. The BMW i3 Concept offers comfortable accommodation for four passengers and, with around 200 litres of boot space, room for their luggage as well.

The chassis of the BMW i3 Concept is also ideal for city driving. Its enviably small turning circle and direct steering responses are a recipe for outstanding agility, notably at low speeds.

All-electric – the BMW i3 Concept. 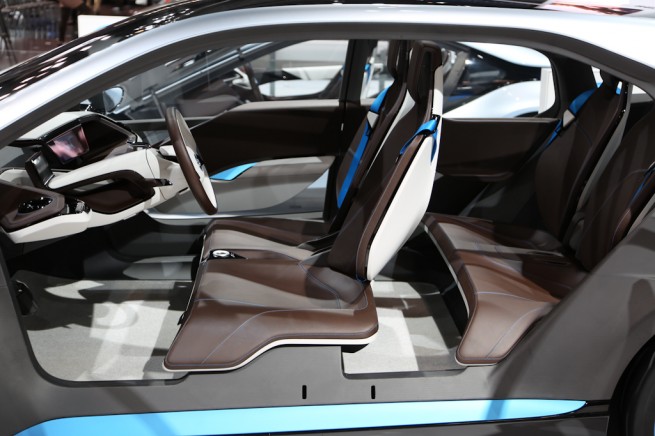 At the same time the abundant torque is delivered over a very large rpm range, resulting in very smooth power delivery. The single-speed gearbox provides optimal power transmission to the rear wheels and accelerates the BMW i3 Concept to an electronically governed 150 km/h (93 mph) without loss of power. The electric drive also allows for deceleration by means of the accelerator pedal. After the driver eases up on the accelerator, the electric motor acts as a generator, converting the kinetic energy into electricity which is then fed back into the battery. Energy recuperation generates a braking effect which makes a significant contribution to vehicle deceleration.

A coasting facility makes this unique “single-pedal control” of acceleration and braking using just the accelerator even more user-friendly. When the driver eases off the pedal, the electric motor’s zero torque control keeps the drive train disconnected as long as the pedal is in this position. The vehicle now coasts without consuming power, driven by its own kinetic energy.

Compact and powerful – the electric motor.

The electric motor of the BMW i3 Concept not only offers attractive driveability; its innovative nature is particularly evident in the favourable power-to-size ratio. As a result of continuous development and refinement, the space requirements of the electric motor used in the BMW i3 Concept have been reduced by 40 per cent compared with the motor used in the MINI E. This compact drive unit is mounted over the rear axle, together with the power electronics, transmission and differential, and does not intrude into the interior. The power needed to drive the vehicle and to operate all other vehicle functions is supplied by specially developed lithium-ion battery cells. 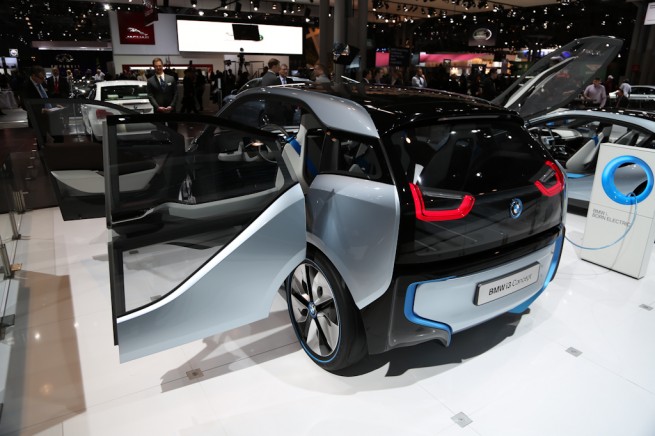 The BMW i3 Concept’s battery system has undergone detailed optimisation which significantly reduces the extent to which external factors can influence the vehicle’s power. Furthermore, an intelligent heating/cooling system keeps the battery at its optimal operating temperature at all times, which helps to significantly boost the performance and life expectancy of the cells. The battery can be fully recharged in six hours at a standard power socket. If a high-speed charger is used, an 80 per cent charge can be achieved in just one hour.

The proportions – dynamic, compact. The design of the BMW i3 Concept reveals the car’s qualities the first time you set eyes on it. The BMW i3 Concept represents the dynamic
interpretation of an impressively practical vehicle. Agile and compact proportions showcase the agility of the BMW i3 Concept and the dynamic prowess of its electric drive system. From the side view, the window graphics and door sills combine to create a dynamic wedge shape, giving the car the feeling of pushing forward before it even turns a wheel. From the outside, a flowing silhouette and long wheelbase hint at the extraordinarily generous levels of space on offer in the interior, while short front and rear overhangs make parking in tight spaces that much easier.
Practicality gets another boost from the “coach doors”, whose opposing construction creates a fresh new way of accessing the large, open spaces of the interior. 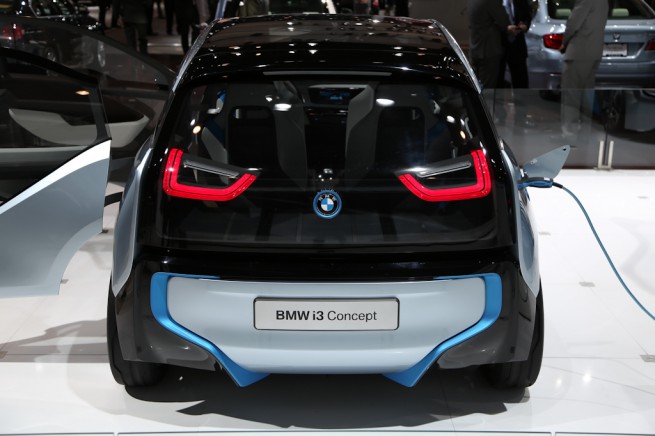 Extensive glass surfaces and black elements like the window surrounds and door sills give the vehicle a feeling of lightness and, together with the exposed carbon structures, draw attention to its low weight. Large, narrow 19-inch wheels add further impact to the dynamic side profile.