BMWBLOG brings you the first live photos of the new BMW i3 and i8. Unveiled today in Frankfurt, the new BMW i vehicles mark the beginning of a new era for BMW. The two vehicles were introduced in front of journalists from around the world and interesting enough, in the setting at Frankfurt Auto Show halls where the world premiere will take place next month.

The i3 is based around a light CFRP body structure and rides on a predominantly aluminum chassis. The BMW i3 provides four adult occupants with excellent all-round visibility, as well as an impressive 200 liters of luggage space behind the rear seats. BMW i3 measures 3845mm in length, 2011mm in width and 1537mm in height.

The plug-in system is a compact electric motor mounted over the rear axle. It draws energy from the battery to provide drive to the rear wheels via a single-speed transmission. 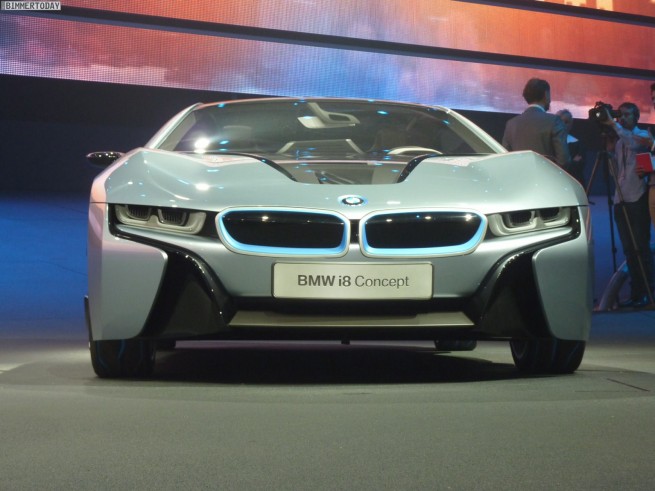 With its zero-emission electric drive and a range of approximately 150 kilometers, the BMW i3 Concept has been specifically developed for use in an urban environment, its dynamic 125 kW electric motor and rear-wheel drive ensuring BMW-style dynamic handling.

At 349 horsepower and nearly 80 mpg fuel consumption, the BMW i8 will set a benchmark in the performance segment. Initially previewed by the Vision EfficientDynamics (Vision ED) concept back in 2009, the super-sporty two-door i8 has already undergone two years of intensive development. The major change is a new 1.5 liter petrol engine replacing the initial diesel unit of same capacity. The engine is mounted at the rear and drives via a dual-clutch gearbox. BMW says the i8 runs a 0-62mph in just 4.6 sec – 0.3 sec faster than the M3 Coupe. 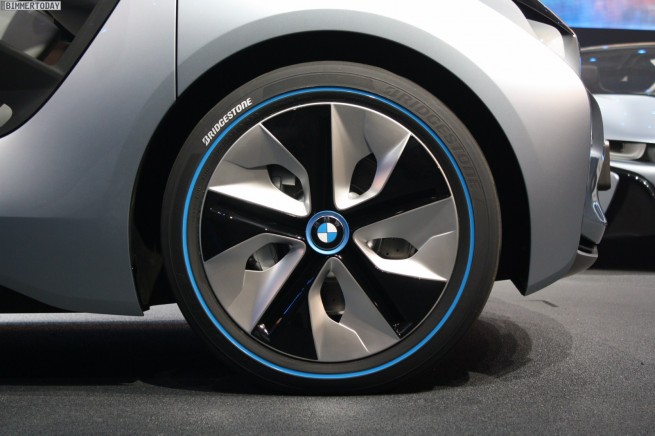 “We are marking another milestone in the history of the BMW Group. As Chairman of the Board and an engineer myself, I am very proud of this project,” declared Norbert Reithofer, Chairman of the Board of Management of BMW AG, at Friday’s premiere of the two vehicles in Frankfurt. “As the world’s leading premium car manufacturer, our aim is to offer customers purpose-built electric-drive cars as well,” he added.

“This vehicle will mark the launch of the first volume-produced car featuring bodywork largely made of carbon. It’s a revolution in automotive design,” stressed Klaus Draeger, Member of the Board responsible for Development. The application of this new CFRP technology allows a weight reduction, compared to a conventional electric car, of between 250 and 350 kilos, and that means more dynamic handling coupled with a greater range. The BMW i3 does the 0 to 100 km/h sprint in less than eight seconds, while a high-speed charger achieves an 80% battery charge in just an hour.

Both the BMW i3 and the BMW i8 will be built at BMW’s Leipzig plant in Germany. Some 400 million euros are earmarked for investment in new buildings and facilities by 2013, while 800 new jobs are to be created.