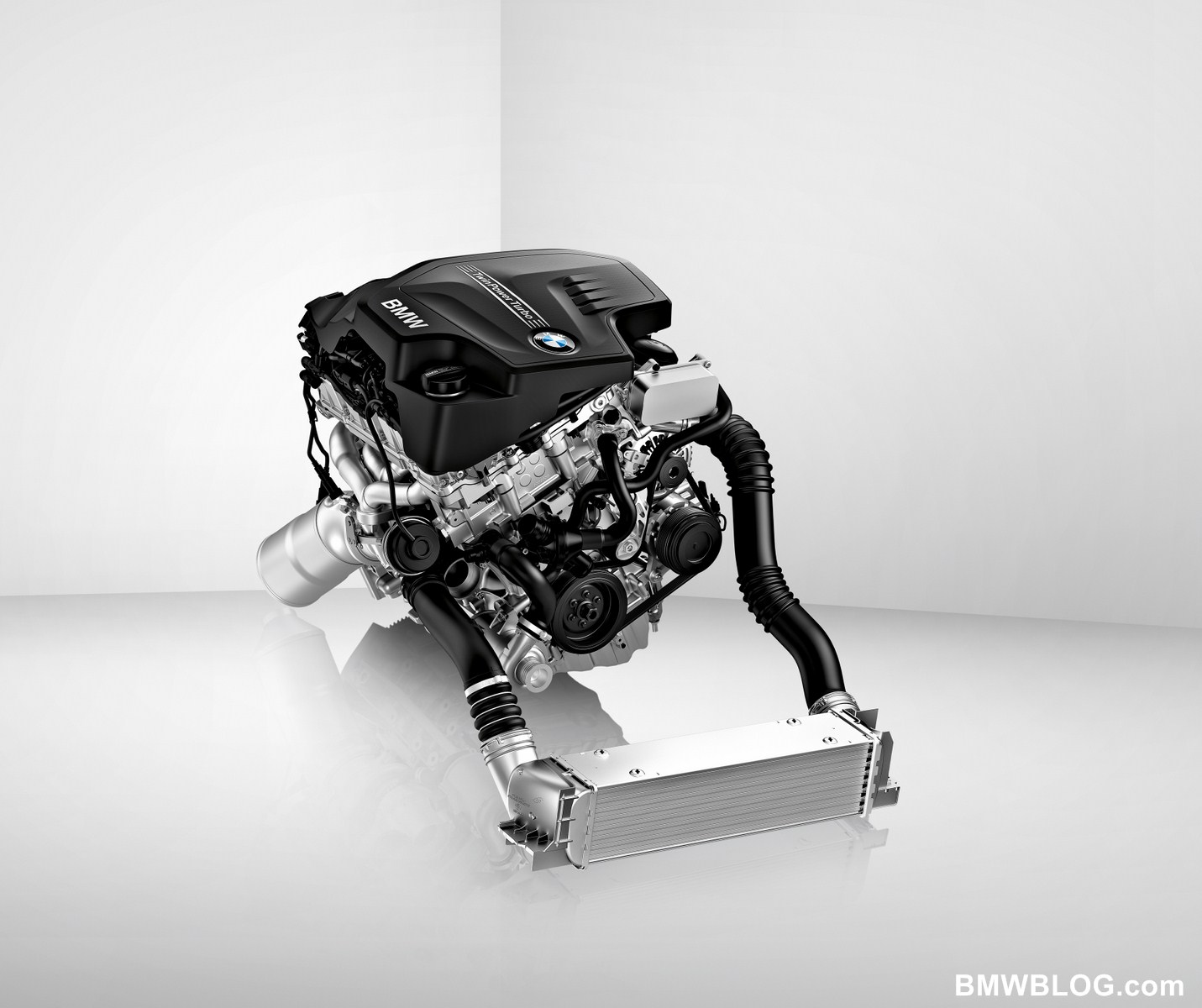 Woodcliff Lake, NJ – July 1, 2011… BMW today announced significant enhancements for the 2012 BMW 528i Sedan, most significantly BMW’s new TwinPower Turbo 2.0-liter four-cylinder engine. To further enhance its efficiency in everyday driving, the 2012 BMW 528i also receives auto start/stop technology. For those who face the realities of four-season driving, the 2012 528i becomes the newest member of the 5 Series family in the US to offer BMW xDrive all-wheel drive as an option. When the 2012 model arrives in BMW showrooms this fall the most popular model in the 5 Series line-up is destined to become even more so.

BMW TwinPower 2.0-liter Four-Cylinder
Like the company’s latest TwinPower Turbo 3.0-liter turbo inline-6, the new 2.0-liter engine will combine high-pressure direct-injection and BMW’s VALVETRONIC intake control (hence the name: TwinPower) with a forced induction system consisting of a single twin-scroll turbocharger. With 240 horsepower and 260 lb-ft of torque, it offers more power and torque than the normally aspirated 3.0-liter inline-6 featured in the 2011 BMW 528i. 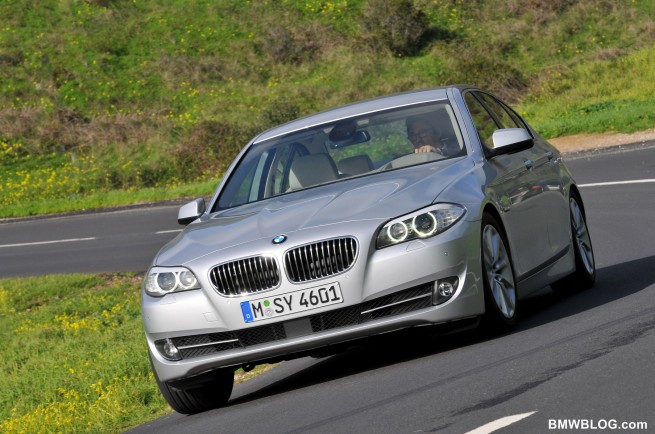 The maximum output of 240 horsepower is achieved at 5,000 rpm, 1,500 rpm lower than in the normally-aspirated 3.0-liter inline six. The peak torque of 260 lb-ft, comes on stream at just 1,250 rpm. Not only is that 30% more torque than the aforementioned inline-6, it also peaks 1,500 rpm earlier. The vigorous power comes on early and climbs steadily all the way to redline.

The 4-cylinder engine with its all-aluminum crankcase is lighter and more compact than a 6-cylinder engine of equivalent power. The turbocharger is a twin-scroll system. The exhaust streams leaving the two pairs of cylinders are kept completely separate as they flow through the exhaust manifold and the turbocharger, taking a spiral path to the turbine wheel. This configuration results in very low exhaust back pressure at low engine rpm, and allows the energy of the exhaust gas pulses to be optimally managed and translated into powerful rotation of the turbine blades, without a delay in throttle response.

The patented BMW VALVETRONIC system with seamlessly variable intake valve lift control dispenses with the throttle valve system typical of conventional engines. Instead, combustion air mass is controlled inside the engine, resulting in much faster response. Pumping losses are kept to a minimum, making the engine more efficient. 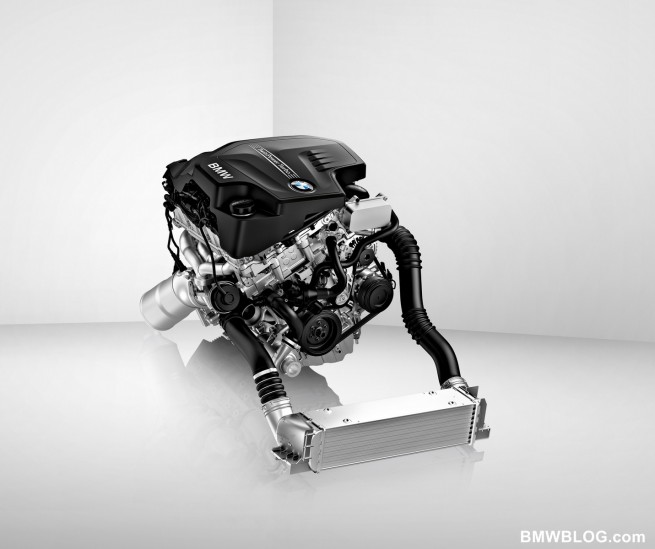 The High Precision Injection direct-injection system also helps to improve efficiency. Centrally positioned between the valves, solenoid injectors with a maximum injection pressure of 200 bar (2,900 psi) precisely control the supply of fuel. The fuel is injected very close to the spark plug, resulting in clean and homogeneous combustion.

The cooling effect of the injected fuel also allows for a higher compression ratio than might otherwise be possible. This results in further efficiency improvements. In the 2012 528i this innovative new engine will again be mated to BMW’s newest 8-speed automatic transmission. The 2012 528i accelerates from 0 – 60 mph in 6.2 seconds, 0.4 seconds quicker than the 2011 model and will deliver up 15 percent better fuel efficiency (final EPA results are pending).

xDrive All-Wheel Available for the 2012 528i
Like other 5 Series models, xDrive intelligent all-wheel drive has been updated to match the performance and character of the 528i. BMW xDrive provides the reassurance of sure-footed traction in all weather and road conditions, but it also goes far beyond that to provide an added measure of active safety. BMW’s Integrated Chassis Management (ICM) is able to identify and limit understeer by shifting torque rearward (initially 80% to the rear axle) while preserving the stability for which xDrive has been so widely recognized. As a second step, ICM can then apply a precise combination of throttle and individual rear-corner braking in order to maintain neutral handling in a corner – regardless of road surface conditions.

Extra Measure of Efficiency with Engine Auto Start/Stop
In addition to BMW EfficientDynamics technologies like Brake Energy Regeneration, the 2012 BMW 528i will feature Engine Auto Start/Stop. This feature switches off the engine when the car is stationary at traffic lights or in slow-moving traffic in order to minimize idling. An ECO PRO mode, which is activated by the driving experience switch, adjusts the engine map, heating, air conditioning, and mirror/seat heating to minimize fuel consumption. The resulting increase in range is shown on a display.

The 2012 528i is the very embodiment of BMW EfficientDynamics – more powerful, more efficient and more sure-footed. The 2012 BMW 528i arrives at US BMW centers beginning this fall.