According to FastestLaps, a website that tracks lap times at  Nurburgring, the new 2012 BMW M5 ran the popular race track in only 7:55 minutes, significantly faster than its predecessor.

The E60 M5 was timed at 8:13 minutes, despite using the highly popular high-revving V10 engine. If indeed the lap times are correct, then this makes the new F10 M5 the fastest car in its class. At the same time, this proves that the new M5 is not all about engine power, but rather about a new improved chassis and overall technology updates turning the M5 into a better performer with increased fuel efficiency. 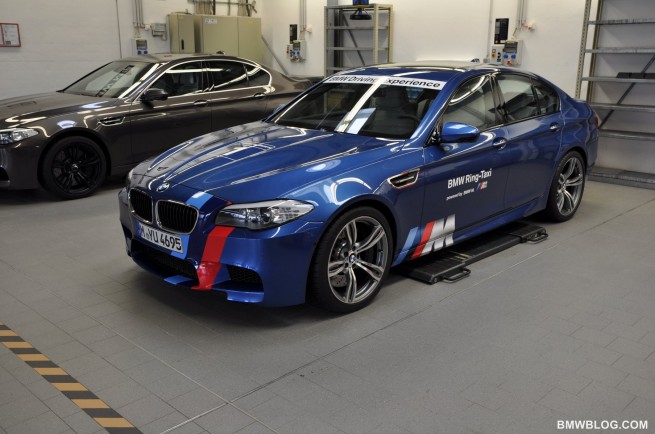 Last week, BMWBLOG attended an exclusive workshop with BMW M head of engineering, Albert Biermann, who described the the radical chassis and engine design. The new M5 has a weight distribution of 51% front, 49% rear. Several kilograms were saved through the use of rear exhaust silencers constructed of titanium.

In a recent article, we described some of the technology improvements of the new M5:

Speaking of the engine, BMWBLOG can confirm that the new M5 will be fitted with a new engine; it will not come equipped with the same engine as featured in the X5/X6 M cars. True, the block and many ancillary parts will be shared, but the head, turbo system and electronics will demonstrate a major departure from those found on the X5/X6M.

First of all, the turbo plumbing both on the intake and exhaust side have been significantly enlarged relative to the previously seen S63 such that engine breathing has been improved and back pressure has been reduced. The cross cylinder bank headers have themselves been increased in diameter for better breathing. The intercoolers are much larger and more pronounced under the hood. Boost pressure has been raised from 1.3 to 1.6 bar.

The valvetronic system has been heavily tuned and modified for the M5 such that turbo lag has been further reduced, and efficiency has been improved. On the test bench at full load the M5 engine shows a 30% improvement in efficiency over the S63 found in the X M cars while making the same power output.

While attending the 24 hr of Nurburgring, BMWBLOG had the opportunity to briefly chat with Albert Biermann, but we were not able to confirm the Nurburgring lap times. The new M5 is still months away from its market launch and lap times can be very subjective based on multiple factors that can influence the final outcome.