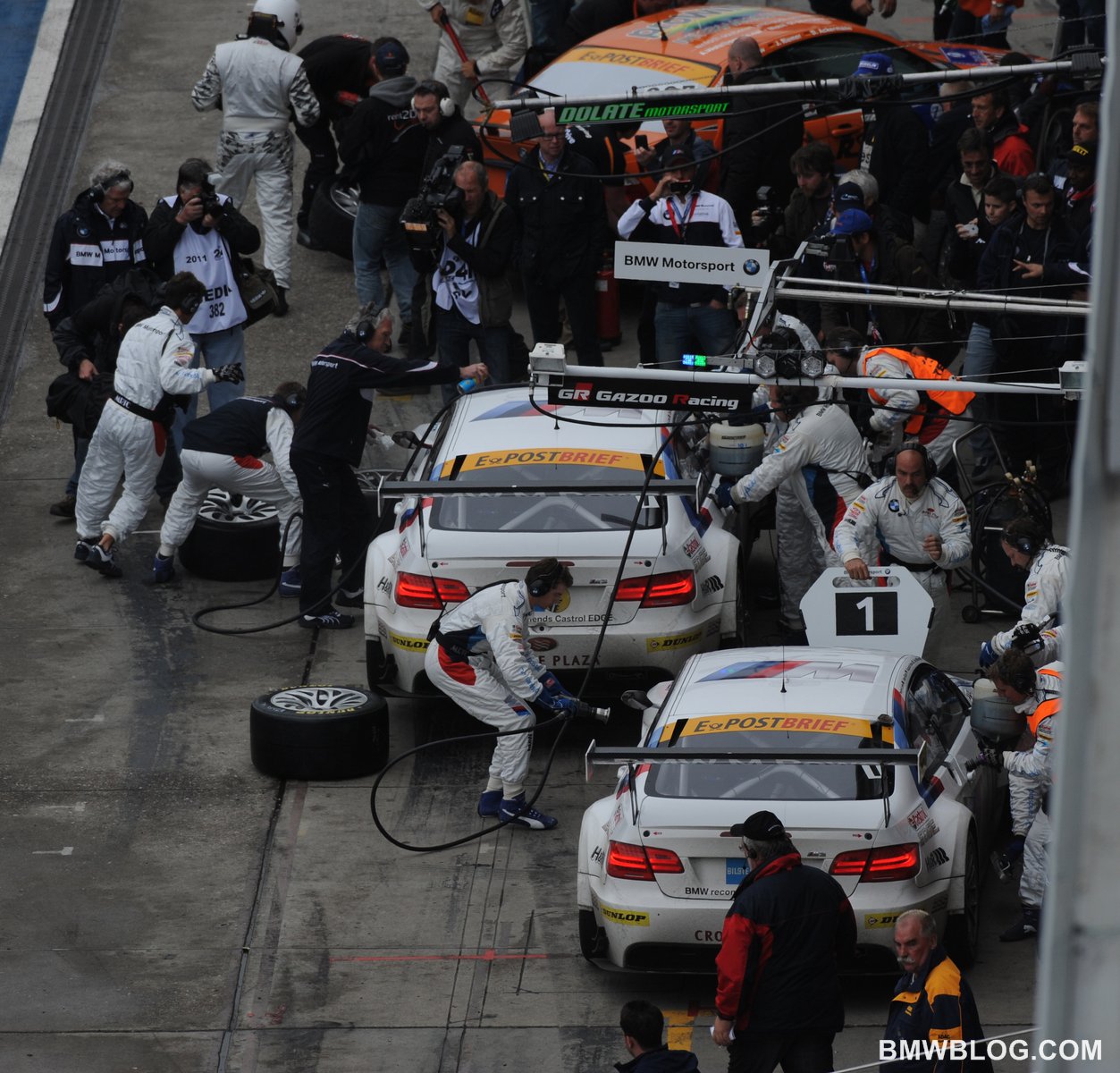 At the start of the 24-hour race on the Nürburgring-Nordschleife (DE), the weather had a crucial influence on the course of the first laps in the “Green Hell”. Team BMW Motorsport still managed to develop a good rhythm, but then dropped back due to a technical problem on the no. 7 BMW M3 GT and a collision for car number 1.

At the start of the 39th running of the endurance classic, the 25.378-kilometre circuit was still wet. Unlike many competitors who started the race on full wets, both first stint drivers, Dirk Müller (DE) in the no. 7 BMW M3 GT and Jörg Müller (DE) at the wheel of car number 1, went out on cut slicks from Dunlop. As the track started to dry out, this tyre choice proved to be an advantage so both BMW works drivers were able to move their way up to first (#7) and second (#1). 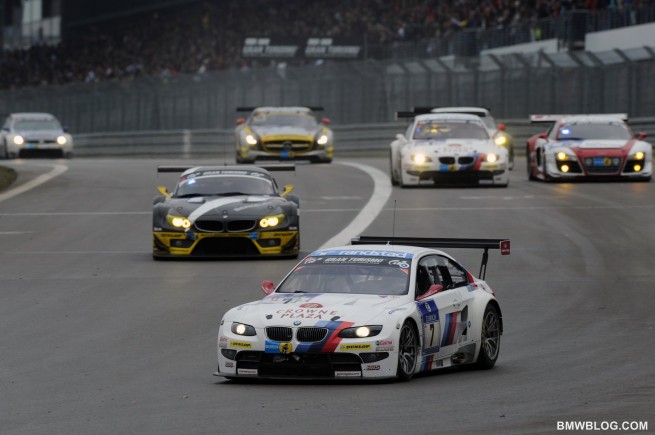 Both drivers had dry tyres fitted at the pit stop on lap six, but meanwhile it started to drizzle again The BMW pairing had to be careful on the slippery track, especially on the first laps of their second stint. Stronger rainfall failed to materialise, allowing Dirk Müller to inch back to second before the car was taken over by Dirk Werner (DE) on lap 15. Jörg Müller passed car number 1 over to Pedro Lamy (PT) on the same lap when running in first.

On lap 20 Werner reported braking problems over the radio and headed back to the pits. A long stop followed, causing the car to lose its fourth place and drop back to the end of the field. Last year’s winners also hit trouble at the Nürburgring-Nordschleife. Lamy got onto the grass when entering the “Karussell” and hit another car when re-joining the track. The following pit stop threw the leading car number 1 back to 12th.  After four and a half hours, Lamy improved to tenth. 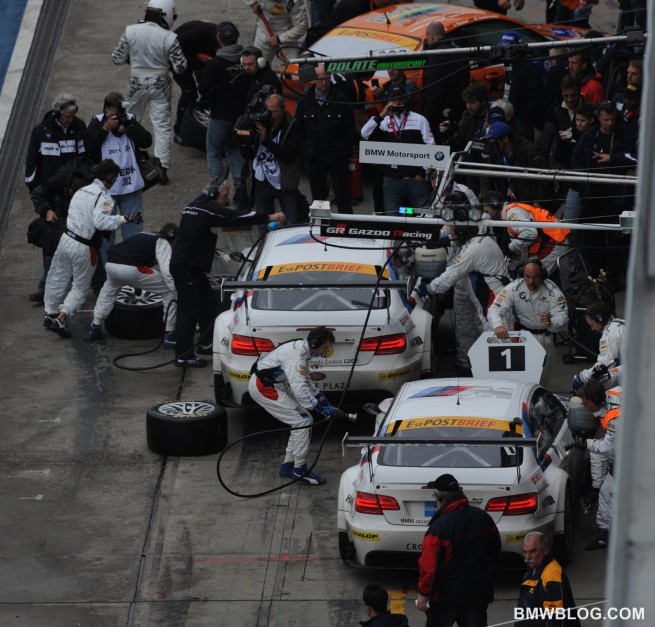 As the race progresses, last year’s winners Augusto Farfus (BR) and Uwe Alzen (DE) will also be called into action in the BMW M3 GT. Dirk Adorf (DE) is currently driving the number 7 car, trying to make up as much ground as possible.

Dirk Müller (car number 7):“In the beginning conditions were far from easy. On the first laps it was still very wet, so I had to be careful. But then the Dunlop tyres built up a lot of grip and worked perfectly. I managed to re-overtake several cars. When I then came in for the second stop it started raining again, with the track drying out again only a little later. When I was on slicks it was good fun out there.”

Jörg Müller (car number 1): “Just a few minutes before the start of the formation lap we decided to go for cut slicks. Initially it was extremely slippery, and I had to let some cars pass. But then the tyres started working. However, you mustn’t risk too much when overtaking. Following our change to slicks it was difficult again in the beginning, but then we found a good rhythm.” 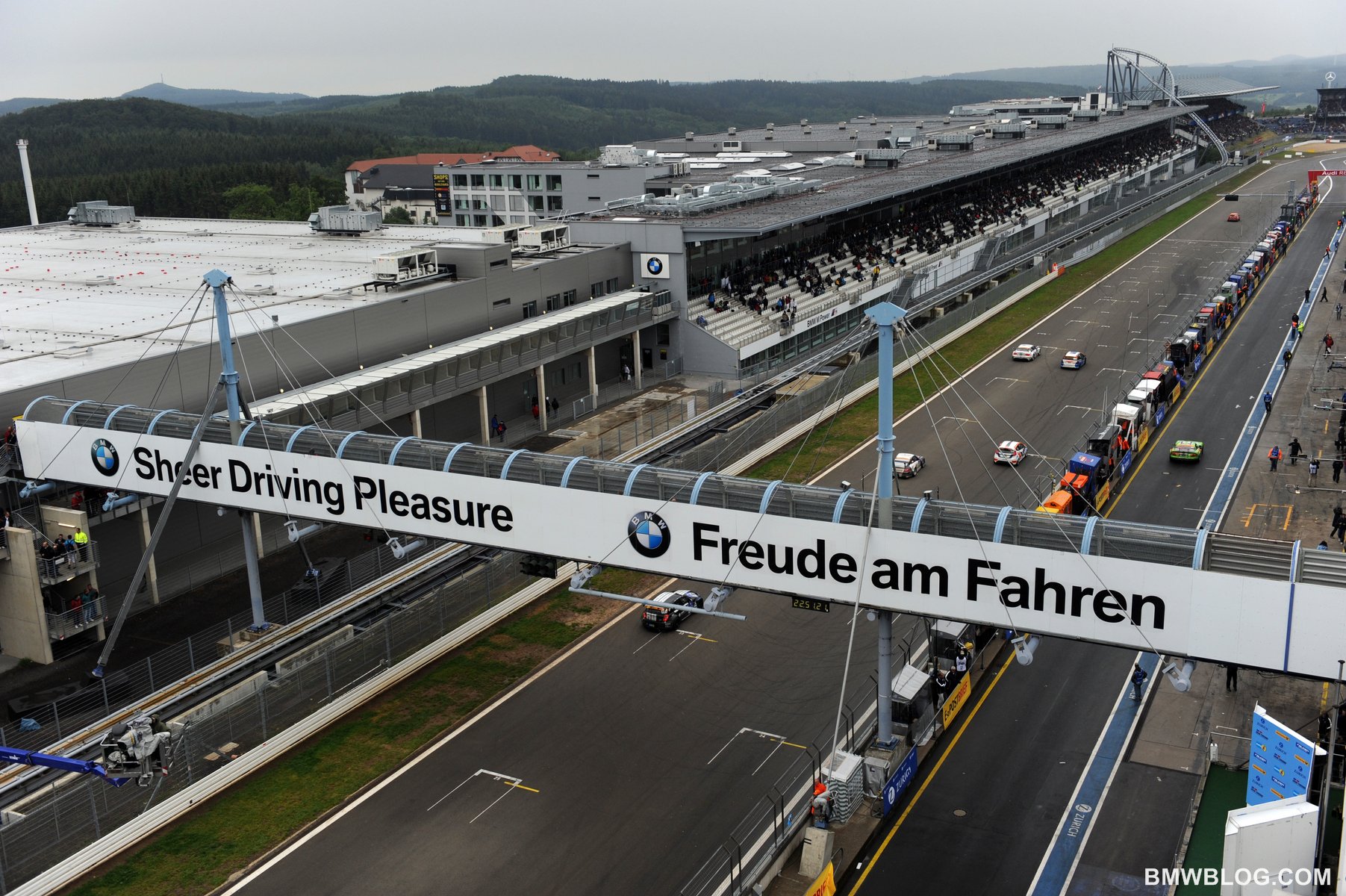 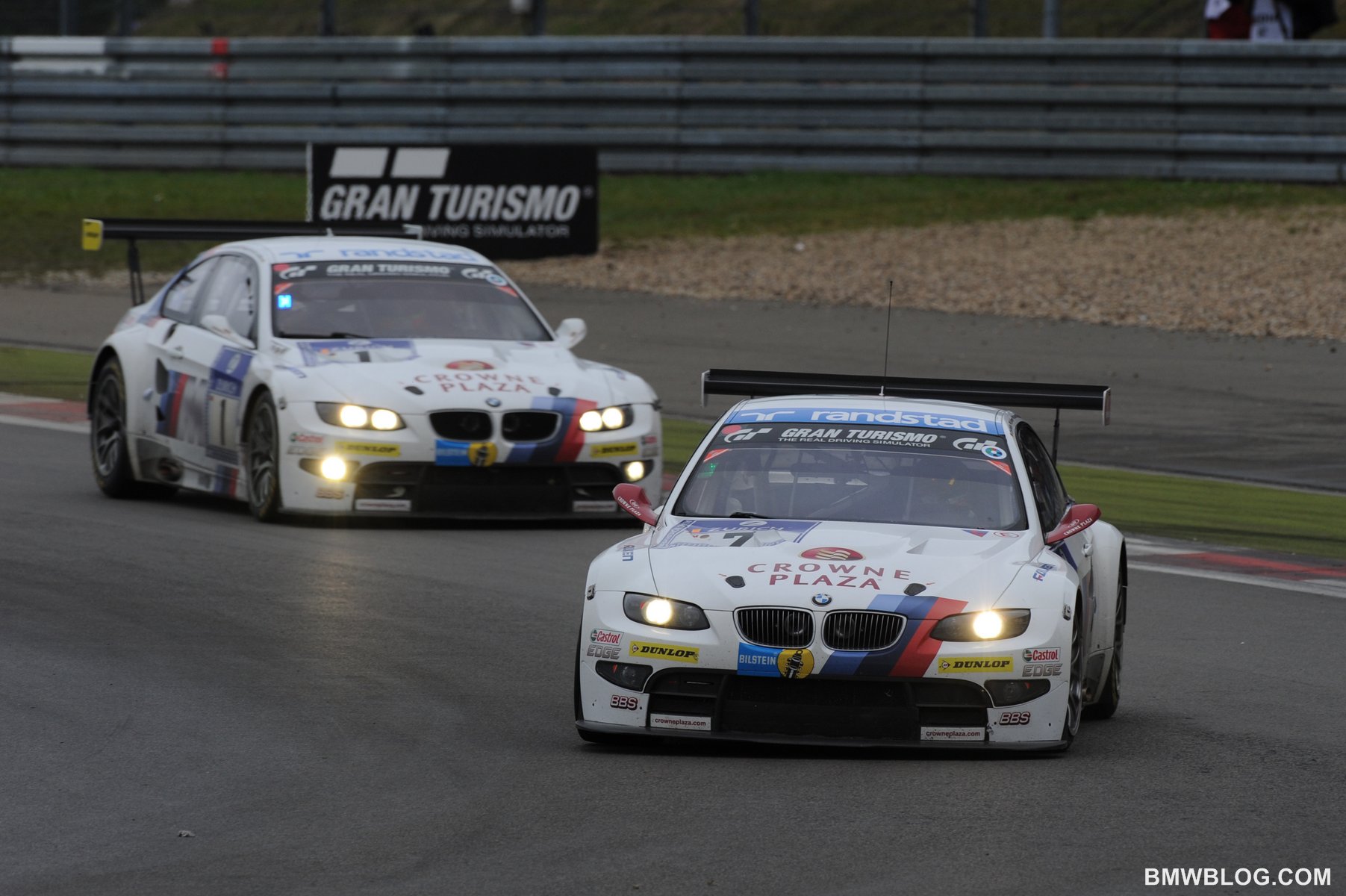 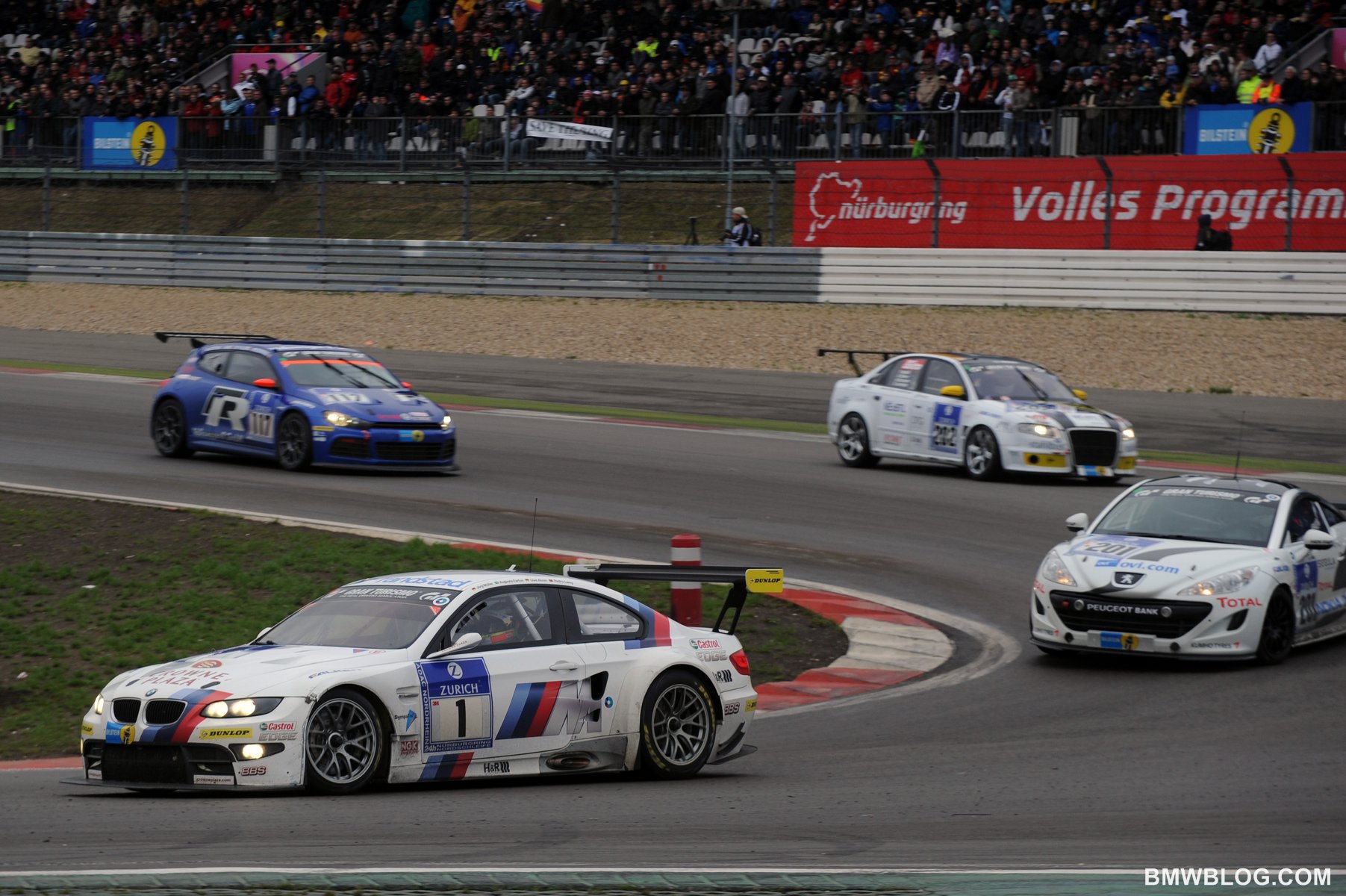 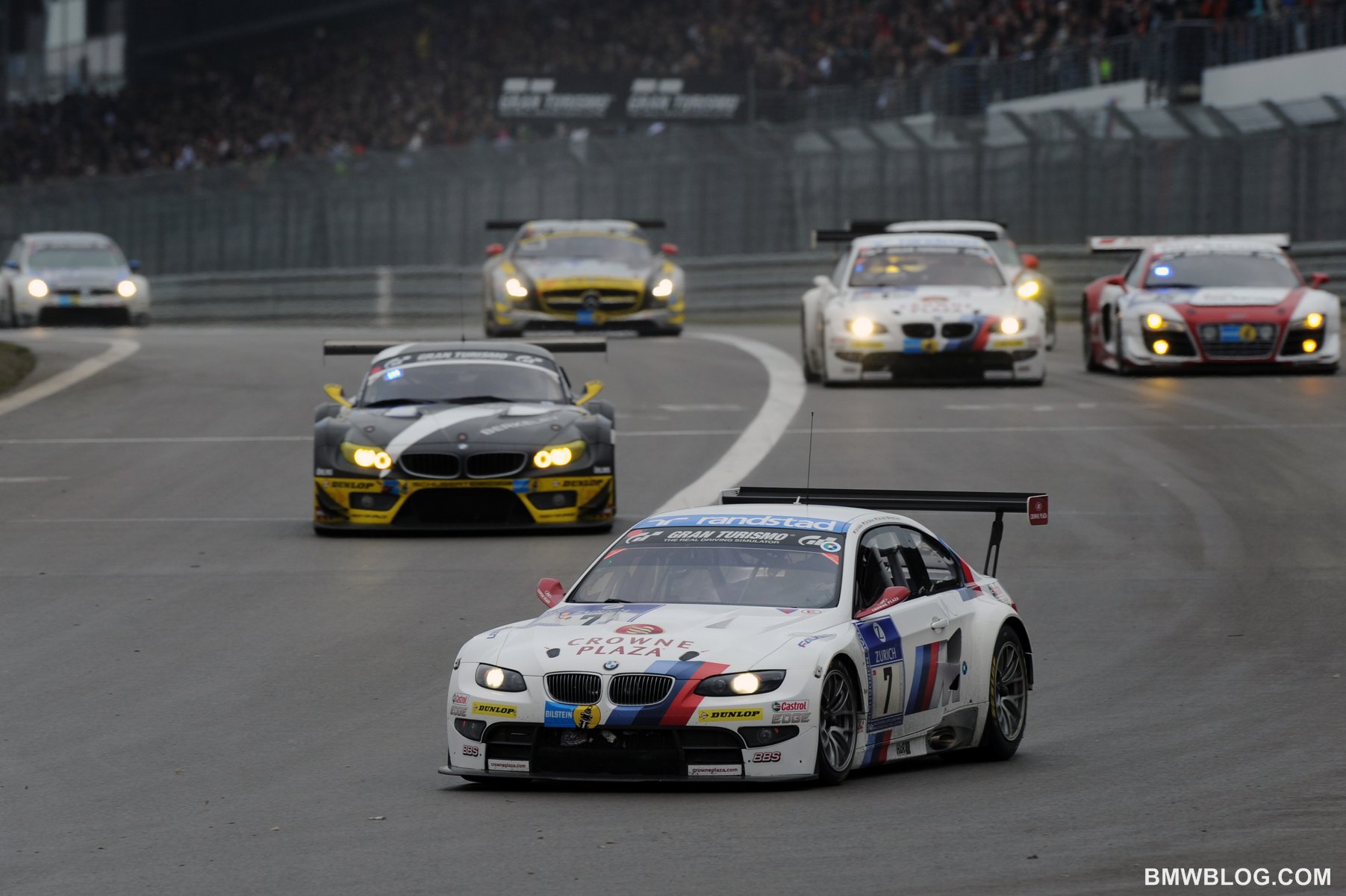