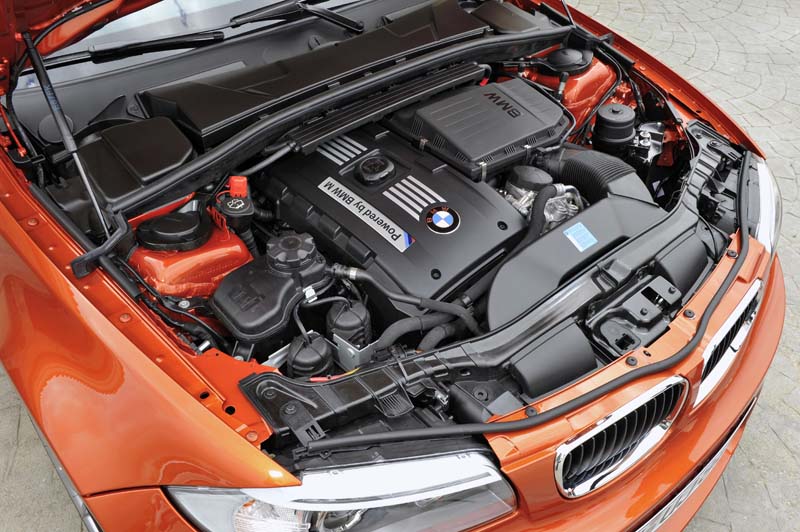 What special modifications were needed after the transplanting of the BMW M3 chassis to the BMW 1 Series?
The kinematics of the chassis, in other words the geometry of the pivot points, link lengths and front and rear axle supports were taken from the BMW M3. The lighter weight means that the front axle support of the BMW 1 Series M Coupé does not need a stiffening plate. In terms of vehicle weight and the shorter wheel base, the springs and dampers have also been readjusted. Other changes were also made to the auxiliary springs and stabilisers, for example the stabiliser on the rear axle has reduced torsional rigidity.

Why is it that the DSC regulator kicks in much more directly in the BMW 1 Series M Coupé, in comparison with the BMW M3 for example?
“DSC on” prevents the back of the vehicle from skidding, while “DSC off” and “MDM mode” are used for targeted drifting.  The adjustment we have chosen ensures driving stability and security in critical driving situations, e.g. high transverse acceleration with vertical excitation or strong acceleration in bends for driving stability and security. The special characteristics of the engine in the BMW 1 Series M Coupé – strong torque and spontaneous response – require that the DSC should engage at the decisive moment.

Would it not have been possible to reduce the weight of the BMW 1 Series M Coupé to closer to 1,400 kilos instead of the 1,570 kilos achieved? After all, a number of body parts had to be redeveloped anyway. What would have been the additional cost for the customer if the 1,400 kg target had been reached?

It is unrealistic to expect a weight reduction of 170 kilos on an existing basic vehicle. The M3 CSL and M3 GTS show where the reasonable limits lie. It would be necessary to develop a completely new car from scratch – which would, of course, also mean a completely different price scale. We were determined to offer a real BMW M that would also allow newcomers to have some fun with the strongest letter in the world. That’s why we are choosing to go with intelligent lightweight construction methods, e.g. light wheels and specific avoidance of insulating mats. The chassis of the BMW 1 Series M Coupé also helps optimise weight. Both the two-joint front axle, as well as the five-link rear axle of the BMW 1 Series M Coupé are made almost completely from aluminium. Tubular stabilisers, axle guides made from forged aluminium and aluminium shock absorbers complete the lightweight concept for the wheel suspension. The weight of the BMW 1 Series M Coupé is precisely the same as that of the previous generation of the BMW M3, with comparable output and much higher torque. The vehicle weighs 1,495kg (DIN kerb weight) (with 90% full fuel tank without driver and luggage); the 1,570 kg specified are the EU standard weight (including 75 kg for driver and luggage). 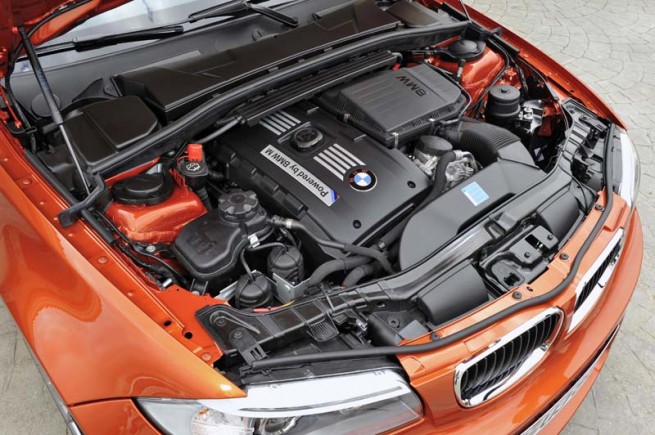 Why does the already good responsiveness of the engine improve noticeably when the M button is pressed?
The M button leads to an emphatically sporty engine control with the focus clearly on the response characteristics of the engine. Comfort-related issues such as smooth running are dealt with on a secondary basis.

What is the precise difference between the two available motor mappings?
On the one hand, the focus of basic coordination lies on unlimited everyday use, while on the other hand, the car’s sporty character is to be allowed to develop. Different motor mappings were implemented in order to achieve these two opposing requirements: from spontaneous and snappy to harmonious, long-haul capabilities. Thus, for example, passengers find the jerking of the head caused by the spontaneous response of the engine when accelerating and decelerating to be quite uncomfortable. The driver registers this less than his passengers. This effect is greatly reduced through basic coordination.

What is the output of the engine at the moment of over-boost? Mathematically speaking, the greater the torque the greater the performance.
Over-boost means a torque of 500 Nm at a corresponding speed. However, the maximum output is not achieved in the over-boost range, but rather at higher speeds. Over-boost is evident in the lower to medium speed range.

Would it not have been an “easy” matter to make the engine output of the BMW M TwinPower turbo a little bit “sharper”…?
Output  means “torque by engine speed”. As the engine speed increases, causing the output to rise, the required speed of the turbocharger would also further increase. However the speed of the chargers cannot be increased indiscriminately if one is also to meet the service life and quality standards applied by BMW. The alternative would be to use larger chargers, which again would not be optimal because of the resulting slower response.

Why is the car supplied with standard sports seats when you order BMW Performance sports seats? Surely the original seats are redundant…
BMW Performance accessories can be ordered from BMW dealers, who will then install them. These seats cannot be supplied ex-works.

Why not supply the bucket seats and a lighter exhaust pipe as Performance options immediately? Surely that would save 80 to 100 kilos of weight.
Changing to bucket seats and a different exhaust system would not be enough to reduce the weight by 80 to 100 kilos.  Seats and exhaust systems designed to reduce weight, as used in motor racing for example, are not suitable for homologation, enabling them to be used in a standard vehicle. Exhaust systems in standard vehicles must meet certain criteria in relation to noise emissions and service life.  There are also legal requirements for seats and seat positions.

Are there any special points to be noted when running in the turbo-charged engine?
There are no general differences from other BMW M engines. The measures described in the operating instructions are to be followed: changing operating states but no maximum speeds and loads. Respecting these principles will also benefit the gearboxes and rear axle differentials. The clutch should also be used as gently as possible while running the car in.

Are there rules for running the turbo when cold, or is this an “urban legend”?
This is no urban legend – the turbocharger comes under high thermal stress and can become red-hot when running under maximum load. The charger is lubricated and cooled by means of the engine oil. Cooling is also achieved by means of the cooling water, so that the pump for this is allowed to continue to run as necessary. Nonetheless, the oil can tend to coke in the bearings if the engine is switched off under extreme conditions. The problem described can occur after maximum stresses, as on the racetrack for example. There is no doubt that, after a longer period of use at full throttle, it would do no harm to allow the car a chance to cool down under normal conditions. The instructions in the operating manual should be observed.


When would you recommend using the “racing brake linings” available for the vehicle?
These are really only suitable for racetrack use: the brake linings feature a further increase in the stability of the frictional coefficient under high thermal stress. However, this comes at a price in terms of comfort (rubbing/ squeaking) and wear on the brake discs, and the brakes are applied much more forcefully. Despite these uncompromising characteristics, the brake linings available for the BMW 1 Series M Coupé are approved for street use.

What is the difference between “DSC on” and “MDM Mode”?
The DSC, in other words the regulator, is generally activated a little later in MDM mode. However, the coordination of parameters in MDM has one thing in common in all driving situations: the clear focus is on driving dynamics. For example, MDM mode allows the wheels to spin when there is slip on the rear axle – however only up to a certain level of yaw rate and acceleration (instability). Only then will the regulator kick in.

Are there any plans to offer other specific accessories for the car, such as the BMW M3 GTS spoiler or the adapted splitter from the MotoGP SafetyCar?
The parts from the MotoGP SafetyCar are unique pieces that have not completed the standard development process and consequently these are unavailable to customers. BMW M3 GTS parts are also not available for the BMW 1 Series M Coupé because they are only supplied to customers who own a BMW M3 GTS upon production of the relevant vehicle registration papers.

How long is to the BMW 1 Series M Coupé to be built and is there a limit on numbers?
This is not a limited edition.

Is there anything that the BMW 1 Series M Coupé engineers are particularly proud of?
We are proud of the fact that we have got things so right with this car in such a short space of time, producing a top-class driving experience that is also perfect for everyday use. The BMW 1 Series M Coupé is every bit as sporty as it looks.

What was the reason for deciding against an adaptive chassis?
The BMW 1 Series M Coupé has been designed with absolute consistency: it is purist in its form and is tailored to a young target group. It has a particular body share, engine, transmission and wheel size.  This made it possible to coordinate all the elements to perfection, so that there was no need for an adaptive chassis.

Why wasn’t the double-clutch transmission of the Z4 sDrive 35is adapted?
The answer is basically the same as for the previous question. Plus the fact that a manual transmission was perfect for the purist character of this car.

is there a plan to provide an M Driver’s Package that extends maximum speed to 275 km/h, for example?
There are no such plans.

Would it be possible to produce a BMW 1 Series M Cabriolet?
It would indeed be possible, but no such plans exist at present.