At the 2010 BMW Championship, we received an exclusive preview of the next generation BMW X3. The new, redesigned and improved premium compact SAV will be unveiled at the Paris Motor Show at the end of this month and sales in North America will begin in January 2011.

To find out more about the new X3, the innovations and philiosphy behind the car, we sat down for an interview with Joe Wierda, BMW’s X3 Product Manager.

BMWBLOG: What level of off-road competence has been designed into the new X3?

Joe Wierda: Obviously, when you look at an SUV, and you’re looking at the segment in the US, those are not the primary features that customers are really demanding. Sure, they need a basic level of off-road capabilities, and it’s definitely built into the car – I drove the car at our off-road center in the Performance Center, and it went trough the course that was designed for the X5 actually perfectly – it actually got a higher ground clearance than the first generation X3 so it’s improved, but definitely the focus is more on-road. Customers in the segment are looking for a car that sits a little bit higher, has a little bit more presence, with which they might go off-road occasionally, but that’s not their focus. 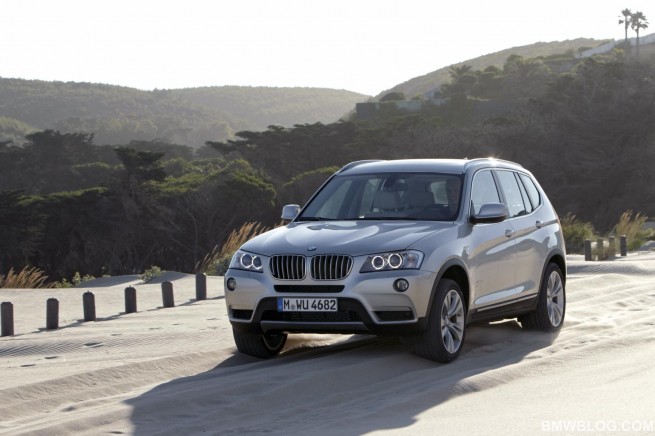 Joe Wierda: It’s hard to say whether there’s just one ideal X3 buyer, because we learned a lot from the first generation X5 as far as who is really looking at this vehicle. If I had to really describe an ideal driver, it would be sort of in two spectrum, actually, maybe a more youthful or younger family-oriented buyer, who’s really looking for a sporty handling SUV, but needs to have some cargo hauling capabilities, and there are also the “downsizers” – people who are a little bit older, coming out of larger SUVs, they don’t have the needs for their family to throw all their stuff in it and pile seven people in the car, so they’re downsizing, looking for a more nimble vehicle, that you know, they can use now because they don’t have to fill so many people in the car.

BMWBLOG: What homage does the new X3 pay to the original one, in design features?

Joe Wierda: The proportions have remained relatively the same, just grown in general, so it still has the unique look, not just the beltline that raises up into the Hofmeister kink. Carry-over features in design elements are really just the philosophy of the car, where it sits within the segment. It’s not quite the size of an X5 and it’s not nearly as small as the X1, but it’s bigger than the first generation, so it’s more of having its own unique identity with some of these character lines, and still maintaining its position within the BMW lineup. The designers may tell you more about the exact proportions of the wheel, and the front to the rear. If you look at the hood impressions from the front, and you look at today’s car – that’s also very similar. But for me the most obvious is the beltline, because we don’t have any other car that looks like that. 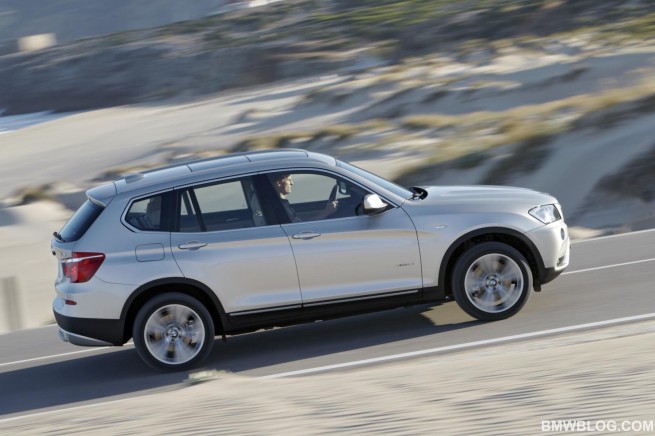 BMWBLOG: Power trains – diesel – hybrids – is this something the market could see here?

Joe Wierda: It’s a challenge looking at the future and trying to predict exactly what power train technologies we want to go with. We’ve had a lot of success with our diesels, not just in the sedans, but with the X5. Something like a 30% mix of our existing X5 sales are diesel now. That’s only in two years that it’s taken off to that level. We definitely see diesel and the SAVs together in the future. We will launch the X3 with the 28i gasoline 6-cylinder inline and then the turbo-charged 6-cylinder inline on the xDrive 35i and we’re also looking at diesel and hybrid as well, because I’m thinking that segment has definitely customers who are looking for efficient technologies and a diesel hybrid could make sense there.

BMWBLOG: Would you say that the X5 diesel is more of a road-opener for BMW in the US?

Joe Wierda: For sure. There is a demand for people to see a payback when they buy an efficient technology and certain hybrids out there are more about – you know, you spend a lot of money but you may not see a payback in terms of your efficiency and savings. The X5 diesel actually does that and I think you’ve seen within your ownership period (Our Note: BMWBLOG drove an X5 diesel for two weeks) that you get your money back and the amount of fuel that you don’t spend money on. So we really want to provide that value equation in the future, because I think the sexiness of a hybrid that costs a lot more out to buy is probably going to wear off in the future and people are going to be more rational with their purchases.

BMWBLOG: How many parts are shared across the SUV lineup, especially in the drive train?

Joe Wierda: I couldn’t give you an exact number or percentage of the parts they’re shared, but if you look at the engines for example, where there are thousands of parts, we’re very consistent with our engines across the lineup: the 35i power train in the X3 is almost identical to the 35i power train in the X5, the 8-speed automatic has also just launched on the X5, so in terms of power train we do a very consistent approach across the models. But in terms of the chassis and the rest of the parts – very much tune for the X3 so it is unique. But again, like the electrical architecture shares a lot of the architecture from the X5 and also the electronic infotainment comes from the 7-series and 5-series.

BMWBLOG: The original X3 was designed with the active young professionals in mind, who like hiking, etc. What sort of package does the X3 bring to this type of consumers, who potentially demand more from their SUVs?

Joe Wierda: When we launched the first car, it was definitely targeted towards that audience – originally that segment didn’t really exist. So who knew exactly those buyers demands – we had an idea and I think we met the needs of these buyers, but pushed it perhaps a little bit too extreme, and for some people that’s not the direction they were looking for.

So we realized that there was a bit more of a mainstream customer, like I said a lot of empty nesters and young families, and a lot of youthful people, but not quite as extreme and off-road as we’ve envisioned. So this car goes perhaps a little more mature and that where we see the segment going.

BMWBLOG: With competition from vehicles like the Audi Q5, what does the X3 bring out to combat this tough competition? We would assume the Q5 would be the main competitor here in the US.

Joe Wierda: Yes, the Q5 has been the sales leader in the last few months. With the Q5 – they’ve done a good job with bringing good value and a good design to the segment. A lot of people looking for a car in that segment have gone straight to Audi because they have a pretty compelling product. What we bring back to the segment is this magic mix of ride handling and value that we have in our 3-series. That we’ve done quite well.

You could ask the same thing about the 3-series: Why the people like a 3-series versus the competition, like Audi or Mercedes, and basically we’re bringing that philosophy to the X3 and I really think we’ve done it right this time and people who will drive the car will see that this serves their needs for everyday functionality and also gives them great ride and handling experience but it’s also a good compromise between ride and comfort as well. While the original X3 perhaps went on a bit more on the extreme and in terms of handling, which could have been too much for some of the people in that segment. 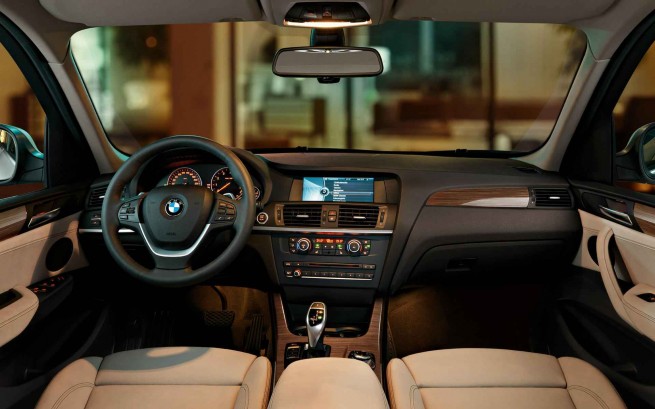 BMWBLOG: Besides the feedback you received on the cup holders, is there any other feedback from the old X3 that led to specific features in the new one?

Joe Wierda: Certainly. As I mentioned, the ride and handling has been substantially improved – a much better compromise between ride handling and comfort on the base suspension, but we’ve also got the optional dynamic damping control as well, so you can vary your suspension tuning to cater to whatever driving experience you’re carrying on. Also the interior quality has been stepped up probably even beyond what the typical BMW normally has been in the past. We’ve had some criticism with the interior quality of the original X3, and this car I think takes it up all the way up to the top of the BMW level of craftsmanship, that our customer expect. Things like the contrast stitching and the nice wood trim, I think customers are going to look back and see that as substantial improvement.

BMWBLOG: Is the low-volume of sales in manual transmission the main reason why it’s not going to be offered again in the US?

Joe Wierda: Yes. We did have a number of great enthusiasts who bought our manual transmission, but again, it does require a substantial amount of development effort to bring a different power train variant and we really saw a pretty small demand, somewhere around 1-2% for manual transmission. And I think the 8-speed automatic in this car – while still not a manual – it still won’t give you a third pedal, but in this car the 8-speed is just for the majority of customers a great transmission.

BMWBLOG: X1 and X5 – where does the X3 fit in?
Joe Wierda: Pretty much like the 3 series fills the need between the 1-series and the 5-series.

Pricing has yet to be announced, but BMW acknowledged that more standard features will be included in the base price. Both the X3 xDrive28i and xDrive35i will be available at the market launch in January 2011.