Press Release: BMW’s plant in Spartanburg, South Carolina recorded another milestone in their 15 year history as the 1 millionth BMW X5 Sports Activity Vehicle rolled off the production line today at BMW Manufacturing Co.  The Black Sapphire X5 xDrive 35i with Cinnamon Brown Nevada Leather interior is bound for a customer in China.

This is a significant achievement for the BMW Group’s only U.S. manufacturing facility at a time when the manufacturer is just months away from completing a $750 million expansion to prepare for production of the next generation BMW X3.

The BMW X5, which was originally launched in Spartanburg in 1999 as the first vehicle in the Sports Activity segment, has laid the cornerstone for BMW as the most successful premium vehicle manufacturer in the SAV/SUV segment during its 11-year history. This commitment to continuous improvement has resulted in numerous accolades for the vehicle’s design, quality and safety. 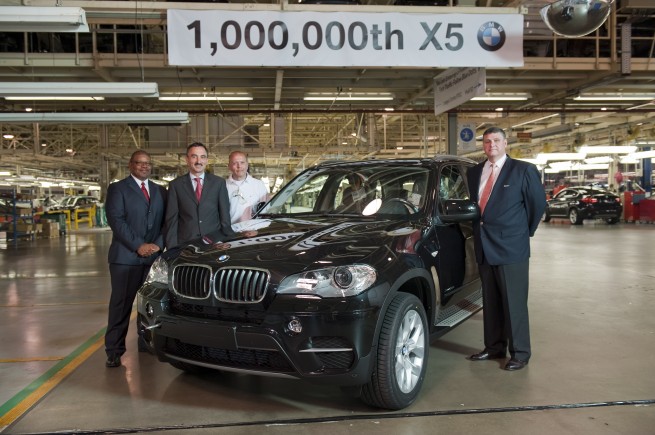 In 2000, the Insurance Institute for Highway Safety (IIHS) declared the BMW X5 to be the safest vehicle ever to be crash-tested. In 2007, the BMW X5 received a gold award in the J.D. Power customer satisfaction study in North America. In 2007 and 2008, the X5 received the “Top Safety Pick Award” for outstanding crash test results from the IIHS. During this timeframe, approximately 60% of all X5’s produced at the Spartanburg facility have been exported to over 120 markets around the world.

“The success of the X5 is directly attributable to the designers of the vehicle, our parts suppliers and the many dedicated and hard working associates who continue to come together and create such a special vehicle,” said Mr. Josef Kerscher, President of BMW Manufacturing during a brief ceremony at the end of the production line.  The 1 millionth X5 coming off the assembly line today was ordered by a customer in China and will soon be shipped to the Port of Charleston to begin its journey overseas.

Joining Mr. Kerscher at today’s event were Secretary of Commerce Joseph E. Taylor and South Carolina State Ports Authority boardmember Richard Hagins. Unable to join the event, U.S. Senator Lindsey Graham praised BMW’s commitment to America by growing its presence in South Carolina and exporting South Carolina-made BMW’s throughout the world. “It tells me, and should tell all South Carolinians, that world-class manufacturing in our state is not only doable, but that it can lead our economic recovery efforts,” said Senator Graham.  “This is a day of great pride for all South Carolinians and the BMW family.  It is a testament to the quality of the SC workforce, the supply chain, and to BMW, one of the greatest automobile manufacturers in the world.  Now, one million X5s later, BMW is one of the great business success stories in the history of South Carolina.  This milestone gives us hope for the future and is a positive sign that through world-class manufacturing our state will prosper will in the years ahead.”