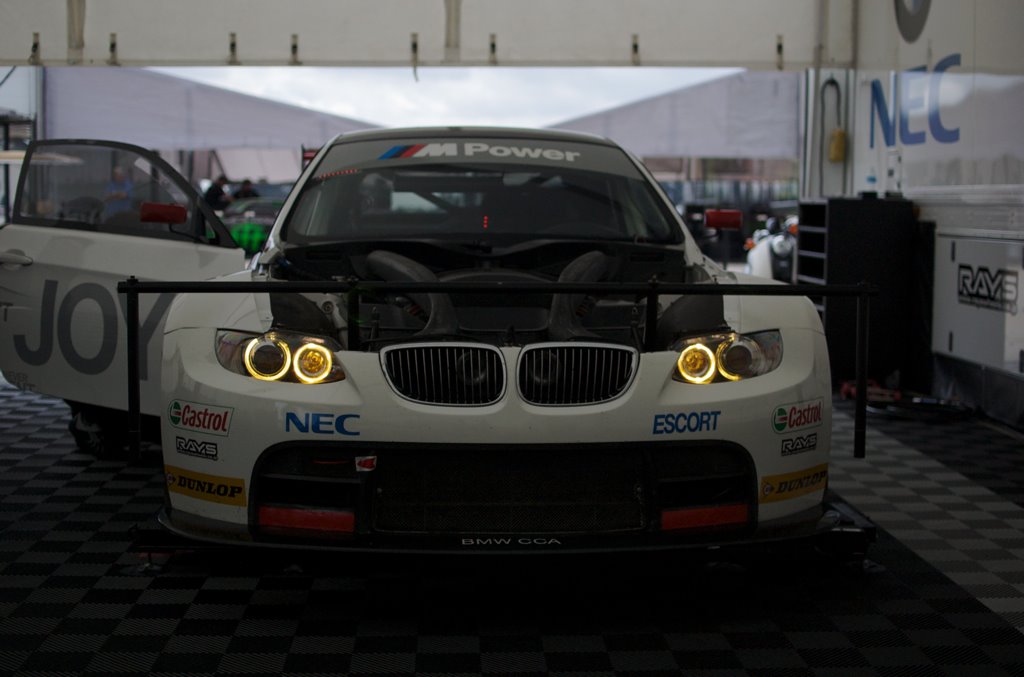 It was dark, humid, and overcast when I started the day at 6AM in Sebring, Florida. However, by the time I was showered and dressed at 6:45AM I could already hear the roar of high-powered machinery echoing across the flat landscape.

Walking into the track at 7:30 sharp, the trailers and staging areas for all of the teams and cars were very quiet with only a few engineers wandering around with an assortment of various tools or lightweight rims adorned with slick tires. Upon spotting a large trailer and an empty, covered corral under underneath a cluster of BMW flags I found the BMW Rahal Letterman Racing Team.

The space was large enough to hold two cars plus crews and was immaculate considering it was set up in the middle of a concrete field behind the paddock. Eventually, after catching up with our contacts and having a delicious breakfast I made my way to the pitlane. “Your pass will let you right up to the cement barrier.” Taking advantage of that I walked straight to the pitwall just short of the BMW crews and came face to face with the 2010 M3 GT #90 of Bill Auberlen and Tommy Milner – getting a fresh set of tires and checks by its crew.

Ironically, I received my first glimpse of the car’s rear – one of the most different portions of the 2010 M3 GT over the 2009 iteration. The 2010 livery shows off BMW’s new, all-encompassing moniker of “Joy” with a plethora of slogans exemplifying the very things that make up the personality of BMW. It’s a subtle yet aggressive livery for what BMW intend for the 2010 American Le Mans Series as well as the 24 Hours of Le Mans. 2010 is an important year after all as this marks both the 35th anniversary of the incorporation of BMW North America – turned over from Max Hoffman’s import car business – and, ironically, also the 35th anniversary of the first overall BMW victory at the 12 Hours of Sebring whith a E9 CSL . Additionally, after a disappointing season start in 2009 with both M3’s proving unreliable and unable to complete their first race at the 12 Hours of Sebring BMW-RLR are ready to bring home another victory for their class.

However, thus far, BMW-RLR is looking strong right out of the gate. In terms of the team, RLR manages the support, logistics and mechanics/chassis of M3’s while BMW retains at least two engineers who oversee the highly secretive V8 powertrain based on the road-going M3’s S65 engine, though with a heavily-revised fuel injection system. BMW also retain the contracts of the 4 works drivers of Bill Auberlen, Joey Hand, Dirk Muller and Tommy Milner – all well respected drivers coming from exceptional backgrounds such as the World Touring Car Championship in Europe or IMSA or the Grand AM Rolex Series. Also, it is the team of drivers who piloted the M3’s in the inaugural season of the ALMS.

BMW spent February 22nd and 23rd getting both the #90 and #92 M3 GT’s ready for the historic 12 Hours of Sebring that takes place this coming weekend. The RLR team maximized their time on track during both days to ensure that the M3 GT is running well and that as many potential faults or gremlins are dealt with prior to 10AM Saturday. One of BMW-RLR’s biggest focuses in the off-season has been to ensure that the issues that plagued the M3 in its first race last year do not rear their heads this year. One such example being that a new starter has been fitted to the motor – an item that caused problems for one of the M3’s last year at the start of the race resulting in the loss of precious time. Additionally, this allowed the team to size up competition noting that the Ferrari 430GT’s from Risi Competitione and the Tequila Patron team are proving to be equally fast with the M3’s.

The M3’s ran successfully throughout the morning with little if any teething issues to keep them from the track and to help simulate the actual 12 hour endurance race. BMW have made it known that they will be on the track at the 24 Hours of Le Mans and that the 12 Hours of Sebring would be both a great place for them to kick off their second year in ALMS GT2 class with the M3 and get the car and team ready for the 24 Hours of Le Mans. We asked why the aging Sebring track was such a good test for Le Mans. The answer was simple: the track is so hard on cars that 12 hours on the central Florida track duplicates the stress and strain of the full 24 hours that a car must endure at the iconic French track. The reason for this is that Sebring is essentially an old 1950’s airfield converted to a road-racing course whose massive slabs of concrete cause for a inconsistent racing surface for the cars and drivers and provides quite the challenge. The rough surfaces are most notable through Turn 17 – the last turn of the course before the home stretch over the finish line where cars must brake from the fastest straight to a very long, undulating right-hander. In standing on the turn-in point of Turn 17 we were able to watch how composed the M3 GT was turning in and then managing the extremely bumpy surface that causes many cars to skip across the center of the turn.

After a successful morning on the track, we were invited back to trailer and staging area as mechanics and engineers spent a bit of time after lunch extracting data from the car and examining how both M3 GT’s held up to that morning’s torture. The engineers and mechanics should be given due credit for the art they perform on these cars to keep them in shape. During the few minutes we were walking around the corral and speaking with driver Joey Hand, engineers managed to partially extract the 4 liter V8 of the Milner/Auberlen M3 and make repairs to an exhaust header and return the lump to the engine bay – without us even noticing! That is how quick, precise and efficient these engineers have become. This is also what it takes for teams to remain competitive, they must be fast both on the track and in the pits.

While the hood and truck were removed and doors open, our host was able to show some of the less known features of the M3 GT that keep it highly competitive – namely the aerodynamic features engineered into the car. One of the most interesting yet subtle features are the air channels built into the door frames that help dissipate heat from the exhaust and undercarriage of the M3 while at speed. The effect being that the higher the speed of the car, the greater the suction strength of the vaccum and the more heat that can be dispensed. Additionally, hidden behind the dual kidney grille are the two “trumpets” that funnel air into the engine for cooling which are also flanked by two massive ducts that pipe over the engine and into the cabin to provide air conditioning for the drivers – something much appreciated in the hot, humid Florida air. Also, in person you can truly appreciate how fat the lower carbon front lip of the M3 is and you can imagine how much front down force it provides drivers for massive front grip on the custom Dunlops made specifically for the M3.

Later in the afternoon, the M3’s were back to the track and running strong against the rest of the field. Their V8’s unbelievably loud as that roared down the front straight and back out into the 3.7 mile course. For an engine as close to road-going spec( the primary differences being the bump in horsepower and the injection system) you just cannot imagine how strong the engine note is – especially as its note reverberates off of the walls of the paddock. By about 5PM the dual M3 GT’s, along with the rest of the field were beginning to wrap up the day – though the M3’s did go out for one last run of about three laps so that they could be chased by a heavily modified M3 sans a hood, passenger door and modified trunk carrying two heavy-duty camera rigs front and rear and one in place of a passenger. Each rig equipped with a handful of Canon 5D Mk II digital cameras to shoot video. The commercial was shot by the Bandito Brothers of the M3-themed – Living in the Lights viral video. However, we will have more on that for you soon!

The two days of testing proved to be productive as the drivers felt confident about the set up of the cars and that the rest of the team looked impressive in action working on the cars. As everyone knows, BMW has a lot to live up to for the 2010 12 Hours of Sebring and they are aiming to shut down the competition right out of the gate. From what we have seen and from the alleviation of mechanical woes that plagued the 2009 car – we think BMW is positioned just right to bring home a class victory.

A special thanks goes out to BMW NA for bringing us to the 12 Hours of Sebring testing to cover this event!

6 responses to “12 Hours of Sebring – Shakedown”