Parallel to the world debut of the new BMW 5 Series Sedan at the 2010 Geneva Motor Show, BMW is also presenting the concept of a future-oriented full-hybrid model in the upper midrange segment: The BMW Concept 5 Series ActiveHybrid for the first time offers the combination of a BMW straight-six with electric drive, setting new standards for sporting pleasure at the wheel and superior sustainability in this segment.

The new concept car offers a particularly good rendition of the new BMW 5 Series Sedan in all its dynamic, efficient and innovative qualities, at the same time representing the ongoing development of the BMW ActiveHybrid X6 and the BMW ActiveHybrid 7 with their drivetrain technology already in production. 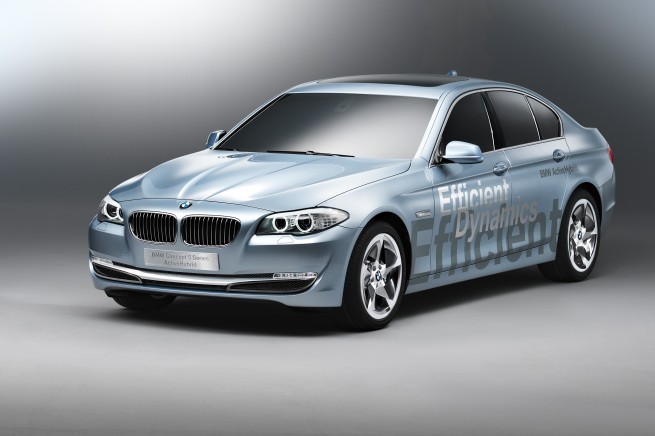 The drive system featured in the BMW Concept 5 Series ActiveHybrid consists of a straight-six gasoline engine with TwinPower Turbo technology, eight-speed automatic transmission, and electric drive. Integration of BMW ActiveHybrid technology in a sedan already extremely efficient with its “conventional” combustion engine reduces both fuel consumption and emissions once again by more than 10 per cent. At the same time the electric motor offers a boost function, supporting the gasoline engine in generating particularly dynamic drive power for an even more sporting driving experience in the car.

Intelligent energy management likewise serves to enhance the efficiency of the overall system, its unique functions ensuring appropriate control and management of all energy paths within the car and appropriate interaction of the drivetrain components precisely adjusted to driving conditions.

The drivetrain technology featured in the BMW Concept 5 Series ActiveHybrid allows all-electric, zero-emission motoring in city traffic. At the same time a special hybrid-based Auto Start Stop function offers additional efficiency by consistently switching off the combustion engine when stopping at the traffic lights, a road junction, or in congested traffic. Optimised comfort, finally, is provided by the auxiliary climate control function already featured in the BMW ActiveHybrid 7.

Special development of ActiveHybrid technology as part of BMW EfficientDynamics. 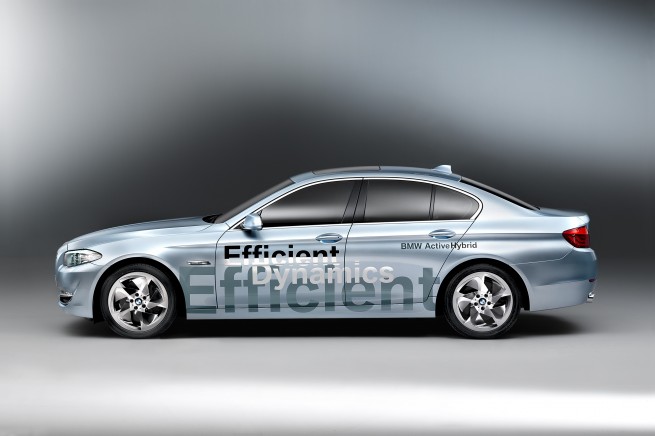 The concept car based on the new BMW 5 Series Sedan for the first time presents the next generation of BMW ActiveHybrid technology, a special solution exclusive to BMW for intelligent interaction of the combustion engine and electric drive focused specifically on the requirements made of a dynamic sedan in the upper midrange segment.
Taking this approach, BMW is consistently continuing the development of hybrid technology according to a modular principle (best of hybrid), thus offering the optimum rendition of BMW ActiveHybrid technology for each concept and vehicle segment.

In accordance with the BMW EfficientDynamics development strategy, this ensures highly effective and practical use of hybrid technology for the reduction of both fuel consumption and emissions.
Also in the BMW Series Sedan segment: the BMW among hybrids combines supreme dynamics with maximum efficiency.

An automatic clutch connects the gasoline engine and the electric motors. 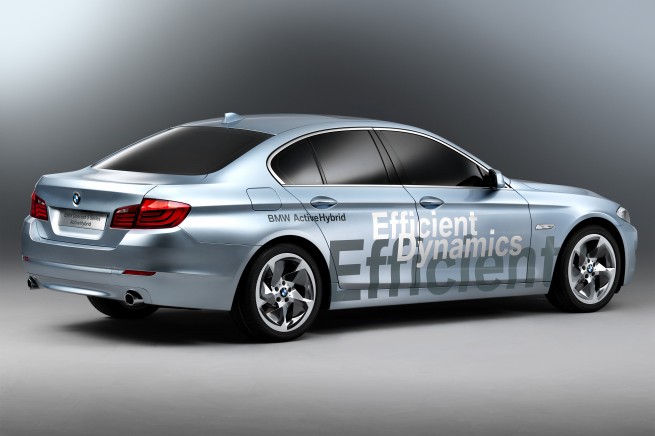 Due to the particularly high level of torque generated from the start through the electric motors, the interaction of the two drive systems ensures extremely spontaneous and dynamic acceleration whenever required.
Perfectly integrated, precisely controlled: high-voltage battery supplying power to both the electric motor and the on-board network.

Such energy obtained without any further consumption of fuel may then be used to generate drive power or operate electrical functions in the car.

This principle is the same as that of Brake Energy Regeneration already applied in BMW’s current production models, with the level of electrical energy generated by the electric motor being significantly greater and the increase in efficiency correspondingly higher.

The high-voltage battery likewise developed for this specific concept is fitted within a high-strength special case near the rear axle of the BMW Concept 5 Series ActiveHybrid. This leads to an optimum position in terms of both safety and harmonious weight distribution. An integrated control unit permanently analyses the charge status of the high-voltage battery and controls both the battery charge process by way of Brake Energy Regeneration and the system cooling process. Apart from the electric motor, the high-voltage battery also delivers electric power to the car’s on-board network. Among other things, this allows efficient operation of the car’s auxiliary climate control activated whenever required by a remote control function to cool down the car’s interior significantly even before starting the engine.

Convenient use of the all-electric driving mode and the Auto Start Stop function is likewise guaranteed in this way, with all electrical functions such as the audio system, climate control or navigation remaining fully available even with the combustion engine switched off.

BMW ActiveHybrid technology provides its unique potential in terms of both efficiency and driving dynamics under all kinds of conditions and throughout a wide load range.

Unlike conventional hybrid cars whose extra efficiency is largely limited to city traffic, both the BMW ActiveHybrid X6 and the BMW ActiveHybrid 7, by combining the combustion engine and the electric motor, are able to offer significantly lower fuel consumption and emission ratings also at higher speeds. This is made possible by technically sophisticated power electronics masterminding the interaction of the combustion engine and electric motor and thus optimising the overall efficiency of the drive system as a whole.

The BMW Concept 5 Series ActiveHybrid once again raises the range of functions provided by such power electronics to an even higher standard. As an example, the energy contained in the fuel and provided by the high-voltage battery may now be used even more specifically and efficiently to provide that Sheer Driving Pleasure so typical of BMW.

Taking additional factors into account, the interaction of the two drive units in the BMW Concept 5 Series ActiveHybrid is tailored to the driver’s requirements and current driving conditions with maximum precision. At the same time the power electronics also control the operation of the car’s ancillary units and comfort functions, again in the interest of maximum efficiency.

The range and diversity of parameters taken into account by the system is indeed quite unique in the automobile, just as the number of functions controlled in this way. A high level of all-round networking allows the power electronics to provide intelligent energy management, thus optimising the operating strategy of the entire vehicle under all conditions.

A further unique feature of energy management in the BMW Concept 5 Series ActiveHybrid is the car’s ability to adjust its operating strategy not just to current, but also to upcoming driving conditions. To do this the power electronics from the start evaluate data indicating a possible change in exterior conditions or the driver’s wishes and prepare the components in the drivetrain as well as the car’s electronic system for a possible change in requirements.

To analyse driving conditions up front, the system uses data provided by engine and chassis management as well as the sensors in the driver assistance systems on board the car. Data saved in the navigation system on the route chosen by the driver likewise goes into the final calculation, enabling the system to forecast driving conditions on the route directly ahead. Then, proceeding from this analysis, the car is coordinated in advance and the optimum use of all systems serves to use the energy available with maximum efficiency.

Should the system determine, for example, that the autobahn ahead is about to lead downhill, the charge level of the high-voltage battery is intelligently controlled in advance to regain brake energy upfront with maximum efficiency.
Similarly, the high-voltage battery may be fully charged in good time before the driver reaches his destination, enabling the system to switch off the combustion engine at an early point and change to all-electric drive along the final stretch of road. Indeed, this forward-looking function is able to extend the cruising range on electric power by up to 30%.

The BMW Concept 5 Series ActiveHybrid: the future of driving pleasure and efficiency in the upper midrange segment.

Optimised to an even higher standard in the BMW Concept 5 Series ActiveHybrid, the drivetrain and control systems underline the great significance of hybrid technology as a cornerstone of BMW EfficientDynamics. Looking at a new generation of hybrid technology from BMW featured in the BMW Concept 5 Series ActiveHybrid therefore offers particularly attractive perspectives, the ongoing development of BMW ActiveHybrid technology serving to provide substantial progress in all areas leading to a harmonious all-round concept with distinctive features typical of the brand.

The BMW Concept 5 Series ActiveHybrid is therefore more dynamic, efficient and more intelligent than conventional representatives of this drive technology, standing out clearly as the BMW among hybrid cars in this segment.