BMW announced the pricing today for the 2011 BMW ALPINA B7 sedan, which will join BMW’s North American product range as the most dynamic 7 Series model. As the second generation of ALPINA automobiles based on the BMW 7 Series to be offered in the US, the 2011 BMW ALPINA B7 sedan will retail for $122,875 (standard wheelbase) and $126,775 (extended wheelbase). Both prices include $875 Destination & Handling. The first BMW ALPINA B7 was offered as a limited edition for the 2007 and 2008 model years. Newly interpreted and based on the current BMW 7 Series platform, the B7 will again set the benchmark in terms of performance, refinement, and technology.

Yielding exquisite levels of power and torque from the twin-turbocharged 4.4 liter V8, and in conjunction with the electronically-adjustable suspension with Active Roll Stabilization, the new B7 promises to offer a spectrum of driving experiences so broad as to be unheard of in this class of automobiles. The evolution of the traditional 20-spoke 21″ ALPINA Classic wheels underlines the fresh design language found throughout the B7 and imparts to it a distinctive appearance and powerful stance. 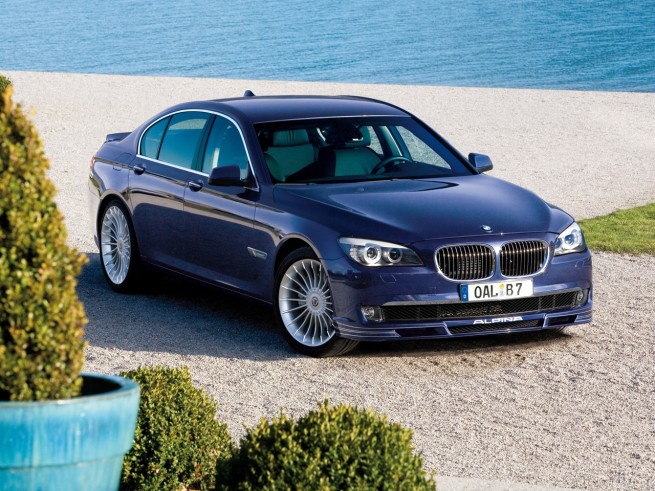 Both standard- and long-wheelbase models will be offered. The BMW ALPINA B7 will make its North American debut at the Chicago International Auto Show and will go on sale at authorized BMW Centers in Spring of 2010.

The B7 sedan is equipped with BMW’s twin-turbocharged 4.4 liter, all-aluminum, High Precision Direct Injection V-8 engine which has been enhanced by ALPINA and is capable of producing 500 (373kW) horsepower and 516 lb-ft (700Nm) of torque. This rear-wheel drive performance/luxury Sedan achieves 0-60 mph in 4.5 sec. With maximum torque available across an unusually broad engine range, from 3,000 to 4,750 rpm, the B7 accelerates effortlessly from virtually any speed.

The B7 sedan is finished with ALPINA aerodynamic developments, including front and rear spoilers which not only enhance the appearance but also improve stability and performance at high speeds. In true “form-follows-function” fashion, the ALPINA front integrates the fresh-air requirements of the transmission and engine oil coolers, which are separated out of the main cooler module for improved efficiency. The spoilers reduce lift at the front by 30% and rear by15%. The exhaust system’s two double tailpipes are seamlessly integrated into the rear bumper. The newest evolution of the traditional 20-spoke ALPINA Classic wheels gives the B7 a distinctive appearance and powerful stance.