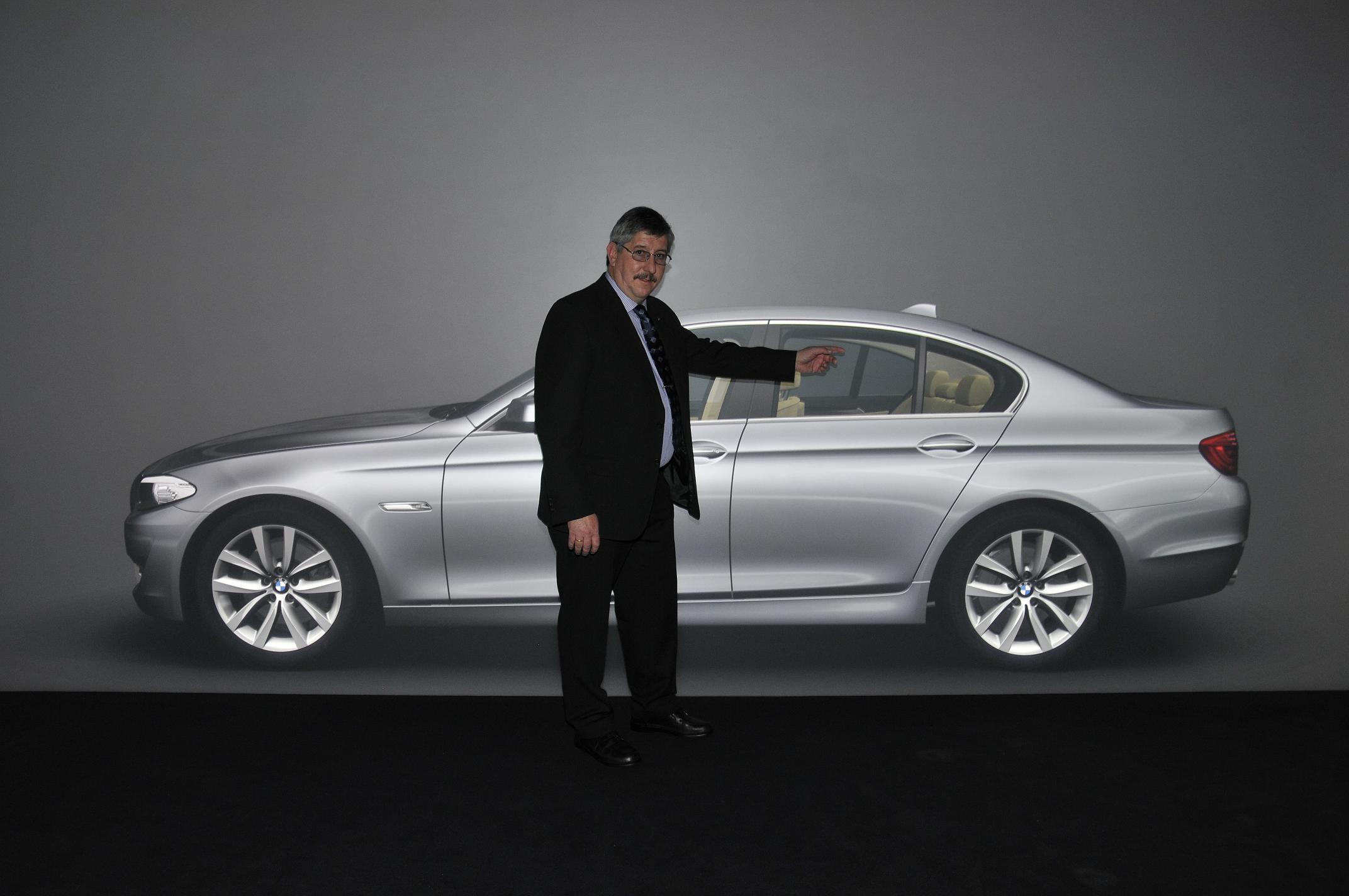 At the world premiere of the new BMW 5 Series, BimmerToday sat down with Josef Wüst, the 5 Series Project Leader. As promised yesterday, we asked some of the questions supplied by you. Tomorrow, we’ll have a short interview with Anders Warming, Head of Exterior Design at BMW.

BimmerToday: One is under the impression that you are very excited about the driving dynamics of the new BMW 5 Series. You spoke in between other things about the fact that you cannot follow the F10 5er with the E60 on a race track. How was this success accomplished because looking at the weight number, there were a lot of people disappointed because the F10 is undeniable heavier than its predecessor?

Josef Wüst: Weight is one thing, but physics are strongly linked to the position of centers of gravity and this is significantly lower than the E60. We have achieved this mainly by extending the distance between centers and the relocation of the engine down and back. Besides the reduction of gravity, this configuration also offers advantages for pedestrian safety and contributes to a very stable ride. The double-wishbone axle has distinct advantages over a traditional axle and if combining the whole thing with the steered rear axle, the E60 cannot compete anymore. 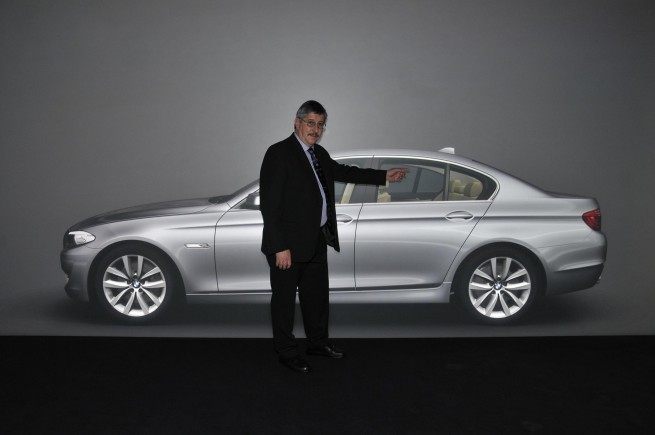 BimmerToday: Will there be any F10 xDrive models?
Josef Wüst: We will offer all the things usually seen in a 5-series.

BimmerToday: Will it be possible to combine the steered rear axle with xDrive or will it be impossible because there is not enough space for this combination, just like you said for the 7-series?
Josef Wüst: It will be the same as in the 7-series, so you can not combine these two things.

BimmerToday: Which engines are planned in conjunction with the xDrive? Will we see also a BMW 550i or 520d with xDrive all-wheel or will it remain specific on some models?
Josef Wüst: We will have a very wide range of offerings.

BimmerToday: In the near future, will there be any turbocharged four-cylinder engines from BMW that will help further reduce fuel consumption and CO2 levels? Are these expected to be seen in the 5 series, for example in the life cycle impulse models?
Josef Wüst: It is not uncommon that during the life cycle to also introduce a new generation of engines, and second, it is the strategy that each new model gets one or more new engines and uses existing engines for the rest of the lineup, this way  the complexity of the model implementation can be kept under control. At the 5 Series, this new engine is the new development stage of our four-cylinder diesel engine, know offering 184 horsepower. During the lifecycle of the BMW 5 Series, we will follow the idea of EfficientDynamics with other engines as well and when this will happen the things you mentioned are obviously worth considerating.

BimmerToday: At the moment, there still seems to be some room in the diesel range. It is expected to see a twin-turbo diesel available in the new 5 series?
Josef Wüst: The 5 Series has a large spread of drive options. We will apply again this 5 Series model the technology we have and gradually different power trains will be introduced in the line-up.

BimmerToday: There are rumors of an even more powerful six-cylinder diesel with turbocharger and around 350 hp, can you comment on this?
Josef Wüst: Such a model would make it even more fun (laughs).

BimmerToday: Are there plans for the rear individual seating as in the 5 GT?
Josef Wüst: No, these are not planned and remain specific to the 5 GT.

BimmerToday: A 3 Series EfficientDynamics was unveiled at IAA, also a 1 Series model is said to appear next year – are there plans for a similar model in 5 Series line-up ?
Josef Wüst: We are talking today about what we do today. But we are developing more and more.

BimmerToday: Norbert Reithofer has recently announced that we will see a hybrid based on the BMW 5 Series F10.There are rumours that we are talking about a Diesel hybrid here …?
Josef Wüst: I won’t tell you anything about this (laughs).
Dirk Arnold (Head of Product Communications BMW): We have nothing to add to the words of our CEO.

BimmerToday: One more question about security: The performance of E60 in the Euro NCAP crash test was not very flattering, the E60 has only received four stars, and therefore missed the goal of five stars. Did you have this poor result in mind when developing the F10?
Josef Wüst: Yes.

BimmerToday: So you have taken the somewhat poorer performance of the E60 to heart?
Dirk Arnold: Yes, but one must also say that four stars in NCAP tests are not really bad and these NCAP-ratings are just a hype that has been built up, resulting in very expensive vehicles and without any important information regarding a car’s safety.

BimmerToday: Nevertheless, it should be the target of a premium manufacturer such as BMW to get these five stars?
Josef Wüst: Of course, yes. We clearly aimed at five stars, but nevertheless we will try to remain rational and do not necessarily make all the desired things as outlined by NCAP.

BimmerToday: A question about weight: Yesterday’s figures have disappointed some and on the other hand, the body will be 50 percent stiffer. What are other reasons for the extra weight, the growth in size is not that big and therefore shouldn’t be the reason.
Josef Wüst: Yes, 40 millimeters growth on the outside is not that much, but the longer space between the axles is very important here. To achieve the rigidity we aimed at, we had to do more work between the axles of course. The issue of security plays a role here because a side impact is harder to manage with more space between the axles. And there are other things adding weight, a pedestrian protection with an active actuator weighs something, an air damper control (Our Note: he was referring to the vents closing and opening behind the kidneys to let air to the engine or not) for EfficientDynamics weighs a little as well and at the end of the day, the question remains whether the compromise is so successful that despite the growth in size, despite increased legal requirements, despite increased security requirements and despite improved driving dynamics, we have still been able to reduce consumption – and this balancing act worked out with the F10 and that is what the customer feels when refueling.


BimmerToday: Yet many people still wonder if driving dynamics and fuel consumption couldn’t have been even better if the F10 had achieved an even lower weight.
Josef Wüst: If it would have been possible the reduce the weight even more for reasonable cost, we would have done it. Of course, you have to make a decision on what you consider as being ‘reasonable’.


BimmerToday: The adaptive suspension adjustment appears to be similar to the one in 7 Series or even the BMW Z4….
Josef Wüst: Yes, Adaptive Drive has also four modes in the 5 Series: Sport +, Sport, Normal and Comfort.

BimmerToday: Mr. Wüst, we thank you for your time!