We’ve already learned that Unbound, the next installment in the Need for Speed franchise, will have 14 BMW models available at launch. The video game’s developer Criterion has joined forces with skate and streetwear brand Palace Skateboards from London for a special version of the hotly anticipated game that includes a special BMW. Spring for the Palace Edition and you’ll be rewarded with a customized M3 Evolution II.

The rare sports sedan was a homologation special of which only 500 units were ever made in 1988. All had an upgraded S14 engine with the same 2.3-liter displacement but massaged to deliver 220 horsepower and 181 pound-feet (245 Newton-meters) of torque. The bump in output was gained by installing a better induction system, higher-compression pistons, mounting a lighter flywheel, and by doing other tuning. Opening the hood revealed big “BMW M Power” lettering and the three famous colors on the white cam cover.

Aside from getting a more potent engine, the M3 Evolution II lost 10 kilograms (22 pounds) after BMW Motorsport’s engineers lightened the bumpers and trunk lid and installed thinner glass. Some aero tweaks were made, including a different front spoiler with a brake cooling duct as well as a trunk lid spoiler. The sports sedan carried over the dogleg five-speed Getrag transmission but its final drive ratio was shortened. 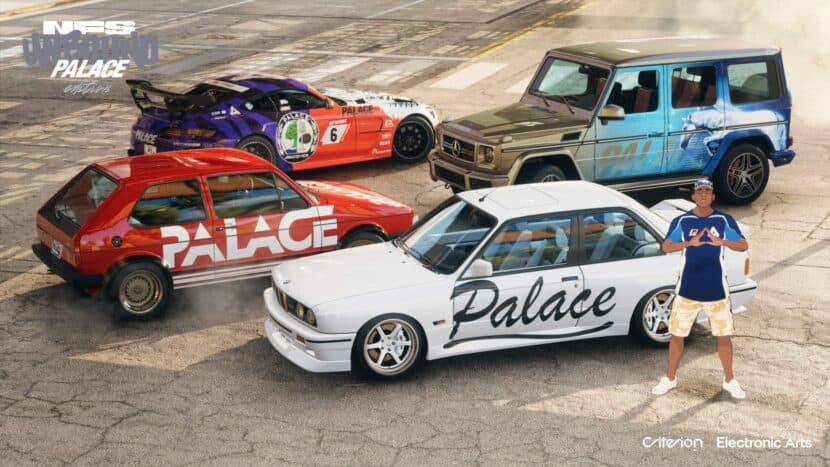 Although it’s finished in white for the game, the M3 Evolution II was only sold in Macao Blue, Nogaro Silver, and Misano Red. Regardless of the exterior, all cars had silver Uberkaro cloth upholstery with leather-wrapped bolsters in silver bison adorned by the three M colors. An individually numbered plaque was mounted on the dashboard to reflect the car’s special status.

This upgraded version of the game also contains three additional tricked-out cars aside from the rare 1988 E30: a 1976 Volkswagen Golf GTI, a 2017 Mercedes-AMG G63, and a 2020 Mercedes-AMG GT Black Series. Players also get some in-game apparel, customized license plates, special body decals, and some fancy artwork. To sweeten the pot, this Palace Edition comes with three days of early access, beginning on November 29. The Standard Edition will be out on December 2.

A new trailer video shows some fast-paced gameplay from NFS Unbound Palace Edition and we get to see the four cars in action on the crowded streets of fictional Lakeshore City. Video game publisher Electronic Arts is charging $79,99 or an extra $10 over the Standard Edition and sells it across the same platforms: Xbox Series X | S, PlayStation 5, and PC.