BMW Canada’s special event to celebrate 50 years of M saw the local launch of the latest M products, the M2 G87 we talked about the other day, and this, the first-ever XM. The gathering in Toronto took place at the Liberty Grand Entertainment Complex and allowed attendees to see the plug-in hybrid SUV wearing an Individual paint, namely Dravit Grey Metallic.

To make sure it would make a splash, BMW showcased the XM with the largest wheels ever installed from the factory on a production model. Codenamed 923 M, the stately 23-inch set was the more expensive version with the gold accents. These wheels alone are a €3,060 option in Germany where the fancy paint job costs a steep $1,250.

The video is a good opportunity to see the “S68” with its engine cover featuring eight red accents to denote it’s a V8 while flanking a prominent “M Power” logo like in the old days. To drive the point home, there’s also an actual M badge with the three famous colors. Speaking of branding, an XM-labeled bag with tri-colored straps holds the factory-provided charging cable in the cargo area. 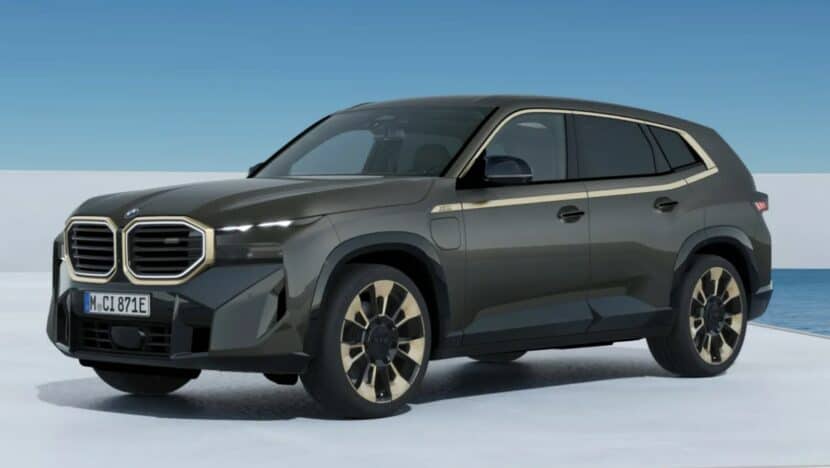 The pre-production prototype BMW decided to showcase had the fancy headliner with a 3D prism structure and no fewer than 100 LEDs embedded into the roof for ambient lighting. Another novelty ushered in by the XM is the Deep Lagoon Merino leather combined with contrasting Coffee Brown Vintage leather covering the upper sections of the door cards and instrument panel.

Even the back seats carry the “most powerful letter in the world” as BMW refers to it as the M Lounge with diamond quilting while offering a fullsize space in the center for a third passenger. The XM presented in Toronto had the optional Bowers & Wilkins sound system with 20 speakers and a 1,500-watt amplifier.

It truly looks spectacular inside and out, albeit some would argue it’s too flashy. That said, BMW knows its audience and projects the XM’s main markets will be the United States, China, and the Middle East once deliveries will start next spring.