Watching the McMurtry Spéirling’s run at Goodwood is a real treat, here’s an electric car, producing sounds reminiscent of Formula 1’s V10 glory days, screaming up the course, making everything else look painfully slow in comparison. It is fun to watch, over and over again – especially one of the Marshall’s reaction as the car leaves the start line. This is an electric car that delights! But the McMurtry isn’t something novel. There are a couple of noticeable antecedents that paved the way for the McMurtry fan car. And before there was fan produced down force there was the inverse – fan powered lift in the form of hovercrafts.

I remember having an AMT model kit of the Ford Levacar Mach 1 when I was a kid; yeah, I’m that old. Conceived in the 1930s the Levacar Mach 1 appeared in the 1950s as a very small single seat fan car, much like the McMurtry Spéirling – except completely different, it was a road going hovercraft. Good luck with high g-force cornering in that rig.

The enabling technology for hovercrafts was powerful internal combustion engines that could provide sufficient lift. An early working hovercraft was completed for the Austro-Hungarian Navy in 1915, called a Luftkissengleitboot, an “air cushion sliding boat”. That particular hovercraft used five engines, four for propulsion and one to provide the air cushion – pressure differential. Aero engines were used and it would be interesting if . . . but BMW didn’t exist at the time the boat was built and Rapp’s engines weren’t held in high regard . . .

I suppose the opposite of hovercraft would be a play on the British colloquialism for a vacuum cleaner, Hoover, or hoovercraft. That’s what McMurtry has done with the Spéirling – it’s taken an electrically powered car and enhanced its road holding through a partial vacuum.

One of the first fan cars – if not the first – was Jim Hall’s Chaparral 2J. The Chaparral 2J was a Can Am car, the SCCA’s Canadian American sports car series, a kind of ‘no holds barred’ spectacle. Hall was quite inventive (with a little help from GM’s engineers) and had startled Can Am competitors with the 2E and 2G models with a large, movable, wing acting directly on the rear suspension. The movable wing was so good that Can Am eventually banned it. So as a means of replacing the missing wing, Hall created the ‘fan car’ for the 1970 Can Am series.

The enabling technology for the Chaparral 2J were the Lexan skirts, used to ‘seal’ the low pressure area. Lexan, a polycarbonate material, was developed by GE in the 1950s. In fact GE and Bayer filed patents for polycarbonate materials at nearly the same time. Bayer’s polycarbonate was known as Makrolon. Polycarbonates were discovered in 1898 by Alfred Einhorn who worked at the University of Munich.

Lexan was chosen for the 2J’s skirts due to it’s durability. The ‘skirts’ were suspended to move along with the car’s suspension. An area at the rear of the vehicle was sealed and a Rockwell 2 stroke snowmobile engine was used to power two 17 inch fans that provided the ‘suction’. Initial testing revealed some odd handling characteristics and the area under vacuum was revised. The snowmobile engine made one heckuva racket, even drowning out the big Chevy V8. It is claimed that when powered the fans alone could move the car forward at close to 40 mph.

The party trick of the fan car was its cornering capabilities. Sir Jackie Stewart drove the 2J at the 1970 Watkins Glen race. It is reported that Stewart remarked on the ability to place the car at will anywhere during cornering – this then was ultimate grip. The Chaparral 2J was very much a ‘ground effects’ car.

Formula 1 didn’t get going with ‘ground effects’ until several years after the Chaparral 2J appeared. Lotus shocked F1 constructors with the brilliant Lotus 78 & 79. The Lotus 78 & 79 used passive ground effects – creating low pressure with side skirts and side pods with inverted airfoil shapes. They were the way forward in F1.

But Brabham had a problem in 1978, they were committed to using the Alfa Romeo flat 12 engine. There was no way you could get the appropriate shapes into side pods that ended with cylinder heads. So Brabham’s designer at the time, Gordon Murray – a name familiar to BMW aficionados, searched for a solution.

It turned out that a careful reading of the rules allowed for an extractor fan to draw air through a radiator to cool the engine. And so Gordon Murray accomplished that (and just a bit more). Again skirts were used to seal the engine bay to the road and the fan would pull air through a radiator, used to cool the engine, as well as air from under the car. The fan was powered by the engine, the power take off located at the gearbox. It worked – however letting off the throttle reduced downforce since the fan was driven directly by the engine. Regardless, other teams protested the BT46B and the rules were subsequently rewritten to exclude it.

That leads us to the McMurtry Spéirling. an electric car using skirts and a fan to create downforce – over 2000 kg of downforce at 0 mph! It produces over double the cars weight in downforce. The McMurty Spéirling utilizes a 60 kWh battery pack, has a claimed 300 mile range, does naught to sixty in under one and a half seconds and can pull 3 gs in corners!

There is a long interview with Thomas Yates, McMurtry Director, on the YouTube Channel, The Car Chat Podcast.

Yates describes the car as about half the size of a modern F1 car, it is compact and lightweight. He calls the car a “200 mph vacuum cleaner”. It utilizes redundant fans and they are variable speed, so the amount of downforce can be varied depending on need – and you’d suspect that that is controlled via software. The fan system is not very big (certainly not anywhere as big as the Brabham’s BT46B or the Chaparral’s 2J fan systems).

One interesting tidbit, as light as it is, the McMurtry Spéirling is equipped with power steering, thanks to the massive amount of downforce created by its fan system.

As interesting as this car is, it’s hard to imagine a racing series that allows fan cars. One of the issues is the amount of dust and debris being forced through the fan and into the cars behind. But hill climbs are ideal for this car and one in particular is screaming for a McMurtry entry – Pike’s Peak.

McMurty has created an incredible electric car, capable of astounding feats, and they intend on making road going versions. Place your orders now! 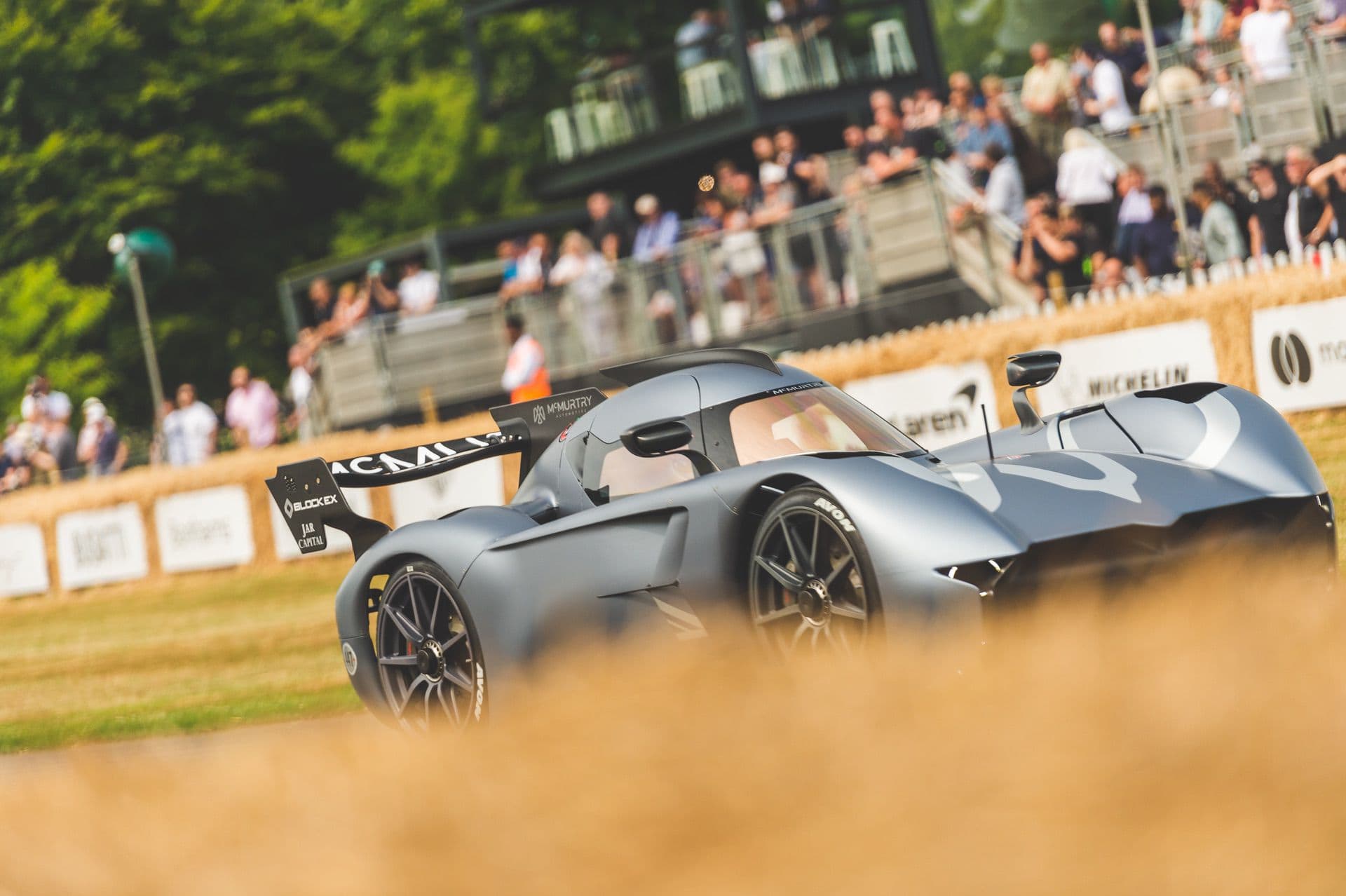 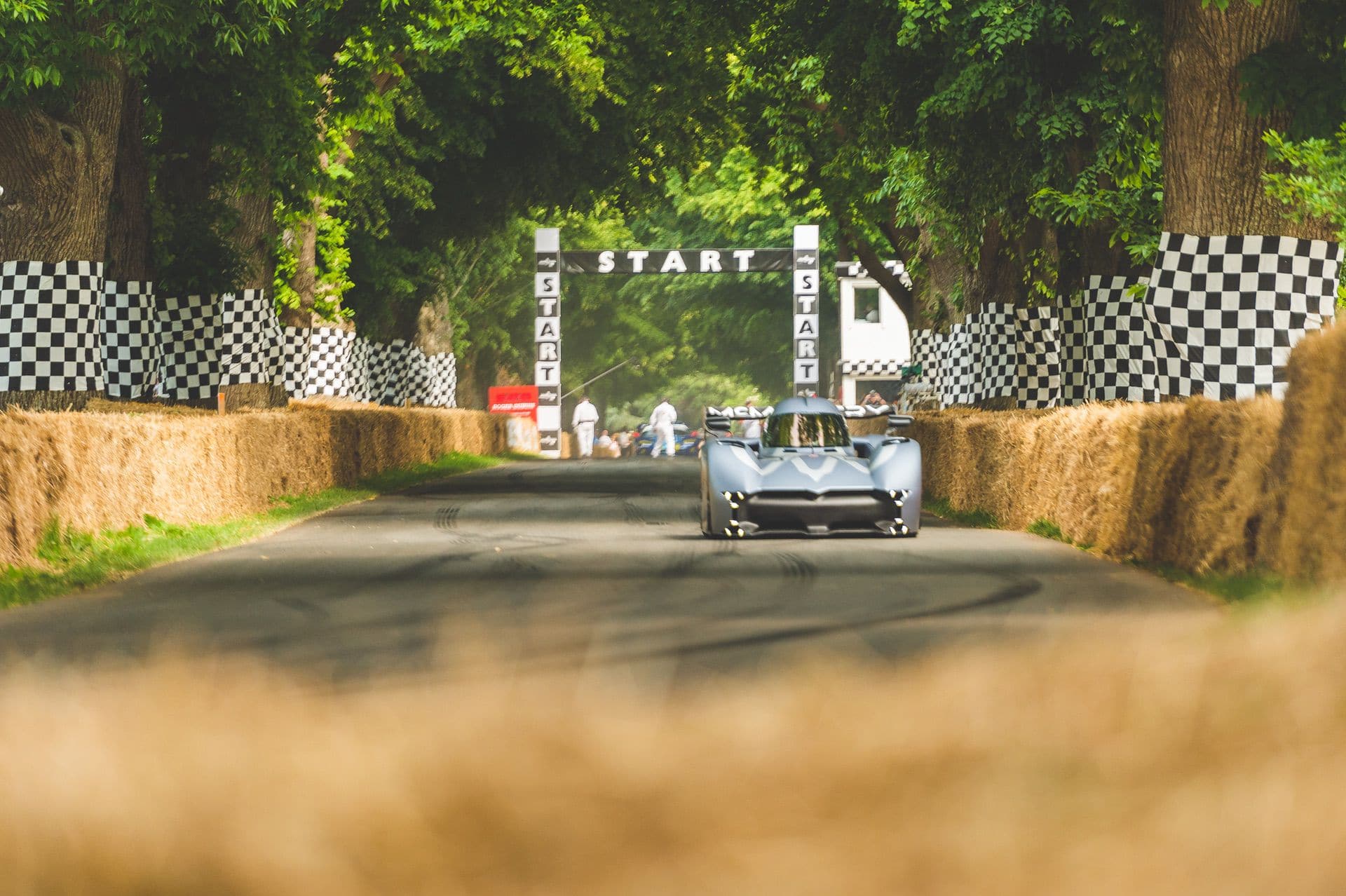 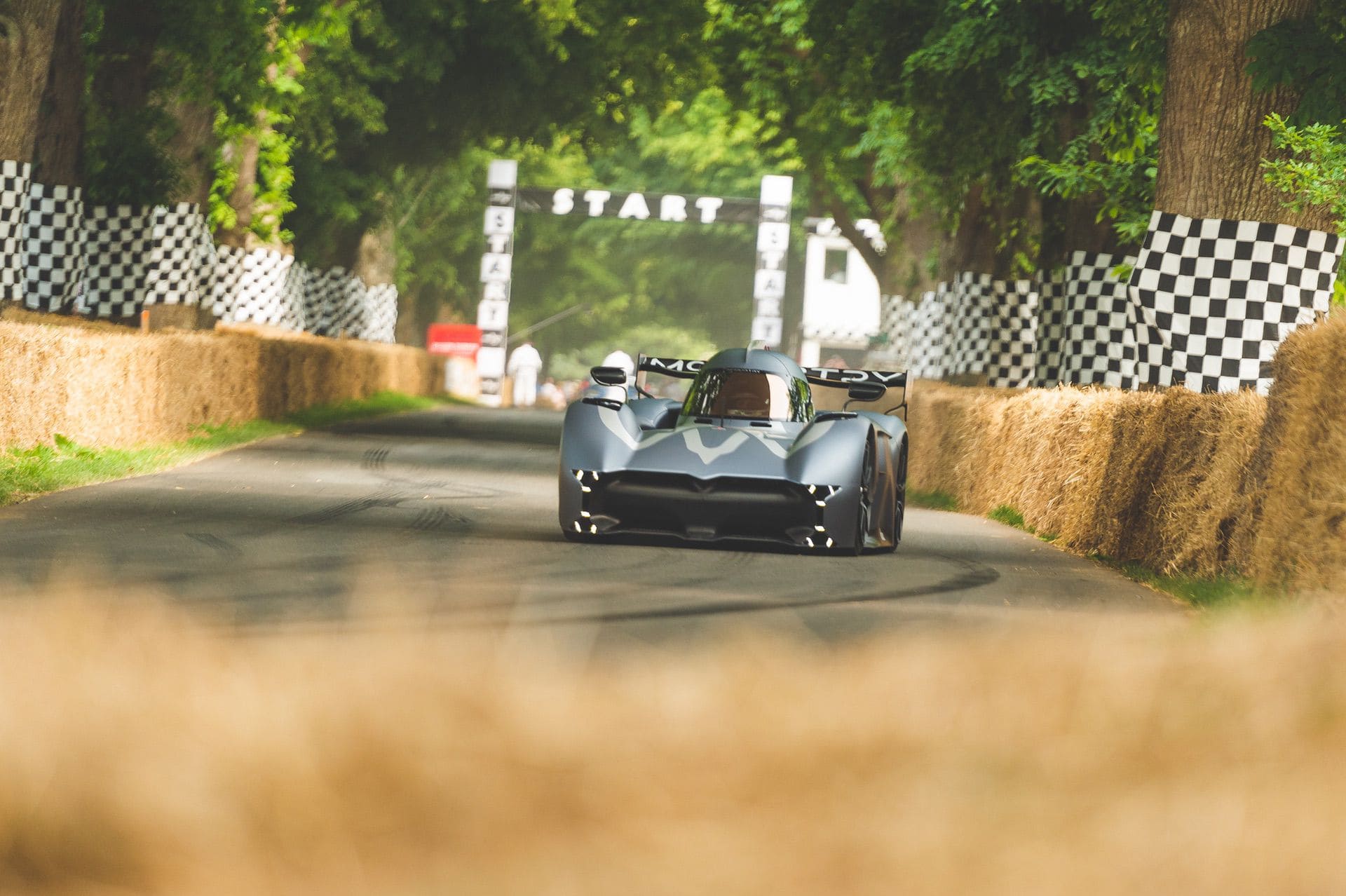 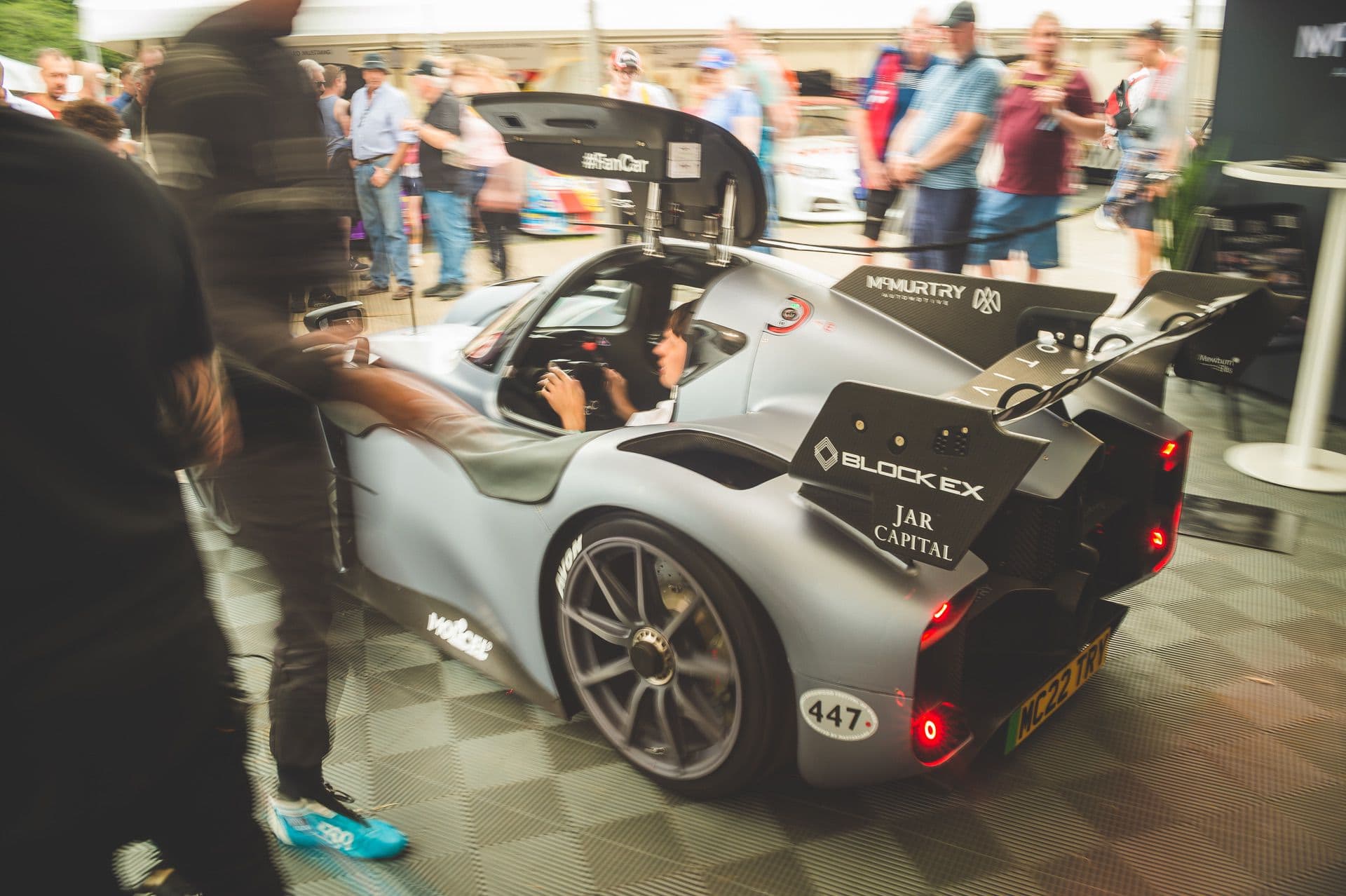