Still the fastest production car with a naturally aspirated engine, the McLaren F1 is celebrating its 30th anniversary in 2022. Yes, the BMW S70-powered machine was introduced in 1992 and is seen by some as the best supercar ever. It’s certainly right up there with heavy hitters such as the Ferrari F40 and Porsche Carrera GT from the analog era.

To mark the special occasion, high-end dealer and collector Simon Kidston put together an epic ensemble of seven McLaren F1s for the Rétromobile in Paris. Not just any examples of the V12 machine, but some of the rarest ones the world has ever seen. That includes the oldest-surviving car, the 1993 XP3 experimental prototype, which Gordon Murray himself purchased after development ended.

Preceding prototypes perished, with XP1 destroyed in an accident and XP2 crash-tested for homologation purposes. XP3 is likely one of the highest-mileage McLaren F1s out there since it has racked up about 40,000 miles (64,373 kilometers).

The track-only GTR was also on display at the 2022 Rétromobile, complete with a restricted BMW engine to meet specific racing regulations. This isn’t an ordinary F1 GTR since it has been converted for street use, hence the license plate. However, it’s still a one-seater since the passenger seat is occupied by electronics.

The BMW V12-Powered McLaren F1 Is An Automotive Icon

As for the black example, it’s a 1994 car with the title of being the most affordable McLaren F1 ever when bought new. A member of the Saudi royal family acquired it as the only Jet Black car with a cream/brown interior. Fun fact – it carries the chassis number #007. The original buyer never used it and his family decided to sell it through an auction house back in 1998.

It went for £350,000, which is an absolute bargain these days for a McLaren F1 in pristine condition. Simon Kidston went on to buy the car years later before selling it. The original owner got another one as well and it too was showcased at Rétromobile.

One of the only two cars painted in Marlborough White, the immaculate McLaren F1 initially delivered to Japan has only 1,500 kilometers (932 miles) on the clock. It still has all the matching luggage, tools, and whatnot, thus making it a veritable time capsule. 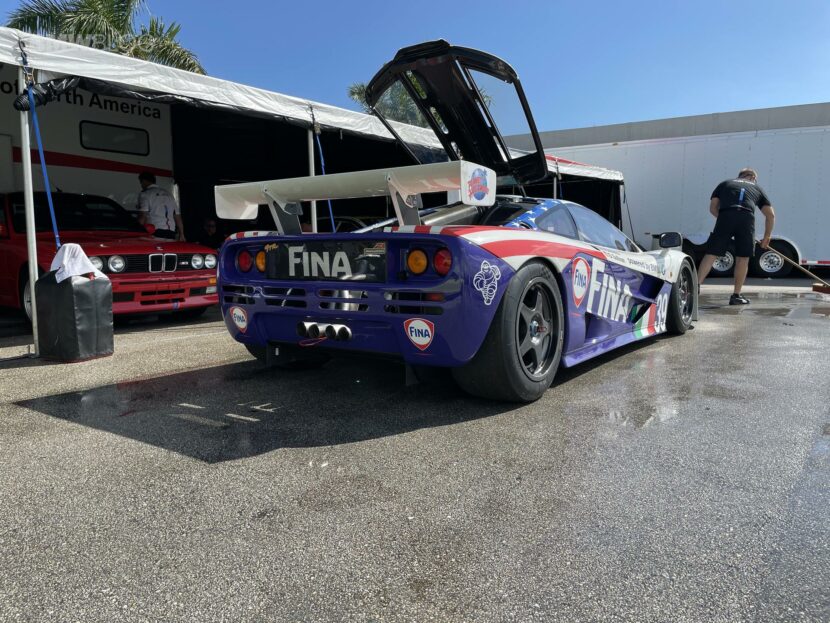 Not shown in public for seven years, the long-tail McLaren F1 road car was conceived to homologate the race version. Known as the XP GT, it was followed by a production version made in only two examples. It was part of the company’s heritage collection before being sold in 2017 to a private customer. Given its reworked aero, it likely has the highest top speed of all F1s, although that was never tested.

Right behind it is the long-tail F1 race car, which it too has been converted for street use. In race car form, it’s the lightest and fastest of the BMW-powered supercar among all track-only versions.

Sitting front and center is an F1 commissioned by George Harrison from The Beatles and unseen in public since 1995. With Hindus motifs and a one-off color, it’s easily the most customized car of them all.

It should be noted the F1 is rare by definition since 106 were made, with just 64 units for road use.