BMW Motorsport Pro Driver John Edwards unboxes the Fanatec Steering Wheel for the BMW M4 GT3 and give us a demo of all the available functions. Fanatec’s collaboration with BMW Motorsport goes as far back as 2010. At that time, Fanatec built a steering wheel to be used in their racing platform, but it wasn’t functional in a regular race car. Then in 2021, the BMW M4 GT3 racing car made its debut on the iRacing sim racing platform as a prototype ahead of its first real race outing.

For the first time also, the steering wheel for the new race car developed in cooperation with Fanatec will work in both a race car and a race simulator. BMW says that absolutely no modifications are required for it to be used in the race car. The carbon steering wheel is a motorsport design, with illuminated buttons and magnetic, dual-action shift paddles also made of carbon. The steering wheel weighs only 1400 grams. 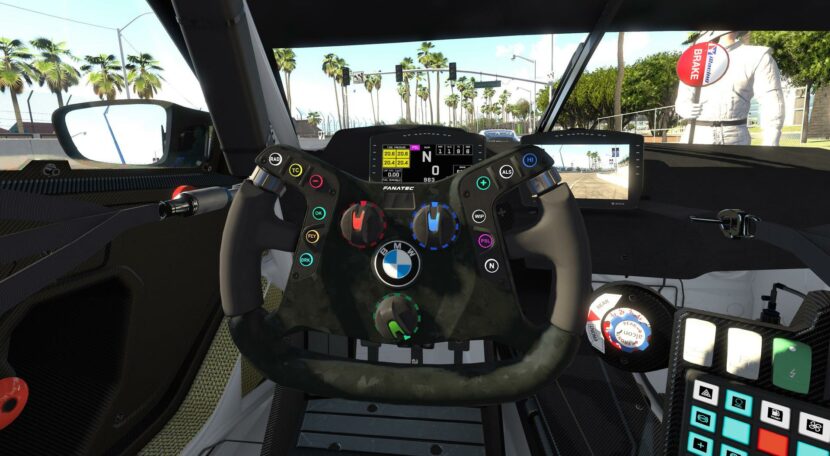 The wheel has to support two completely different communications protocols, sending and receiving data to any Fanatec wheelbase (supporting QR1, with QR2 included in the price for shipping later) and but also the real car over standard CANbus. There are 14 push-buttons (12 front, two rear) with an activation force of around 1.5lb (700g), three 12-position rotary switches, and a four-way D-pad. Additionally, there are two 12-step thumb dials with Hall Effect sensors, two push-pull magnetic shifter paddles, and two dual Hall Effect sensor clutch paddles.

After being initially revealed in December 2020, pricing was announced in November 2021, far lower than the expected €5,000 mark. Pre-orders went live on 20th December 2021 for €1399,95/$1399.95. The first units were sold out within minutes. It’s compatible with PC and PlayStation devices, and wheel bases such as the CSL DD and Gran Turismo DD Pro, CSL Elite and Podium DD1/DD2 devices.

Let’s take a close look behind the scenes with the Fanatec Steering Wheel. Also, don’t forget to subscribe to our Youtube channel for exclusive videos!