If you like BMWs and especially M cars to stand out from the crowd, this tricked-out M3 might be to your liking. PSI recently unveiled its custom G80 for the SEMA show and now the sports sedan stars in a walkaround video to show off its many mods. While most custom builds are based on the hotter Competition version, that’s not the case here since the project started out as a regular M3.

The aftermarket specialist prioritized having the manual gearbox to the detriment of the extra oomph you get from the Competition version. Finished in a look-at-me Isle of Man Green, the heavily customized M3 gets contrasting light gray accents penned by none other than renowned artist Jon Sibal. Since the M3 Touring sadly won’t be coming to the United States, PSI argues the next best thing is to get the sedan with a large roof box color-coordinated with the striking shade of the body.

A carbon fiber front splitter lends the sedan a more aggressive look and blends nicely with the side skirt extensions, the OEM mirror caps, and the carbon fiber trim of the M badge on the front fenders. At the back, a fairly large diffuser continues down the sides of the bumper and complements the trunk lid spoiler also made from carbon fiber. PSI also swapped out the original exhaust for a lighter titanium setup from Akrapovic with carbon fiber end tips. 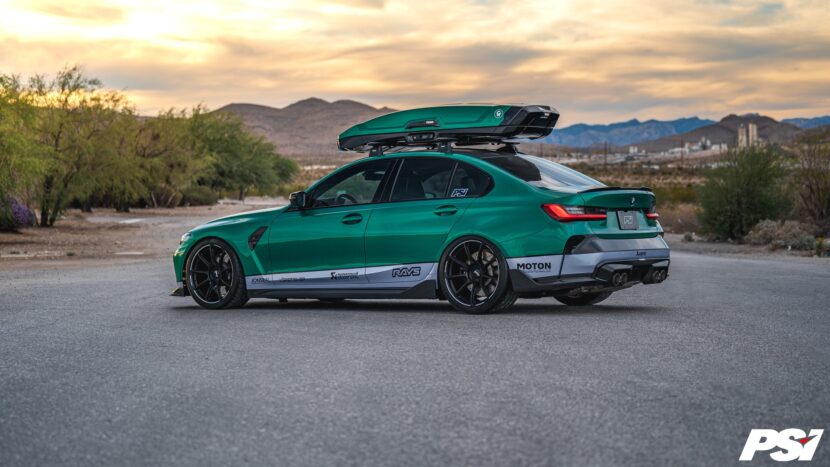 The last order of business was to swap out the OEM wheels and make room for a custom set of black Rays measuring 20 inches on both axles. PSI brought the car closer to the road courtesy of adjustable Moton coilovers.

We would argue the icing on the cake is the Kyalami Orange interior cabin to create a truly special look, made more desirable by sticking to the six-speed manual gearbox. The M3 Sedan now has a polarizing appearance, but we can all agree its custom configuration does have appeal among people looking for something a bit out of the ordinary.