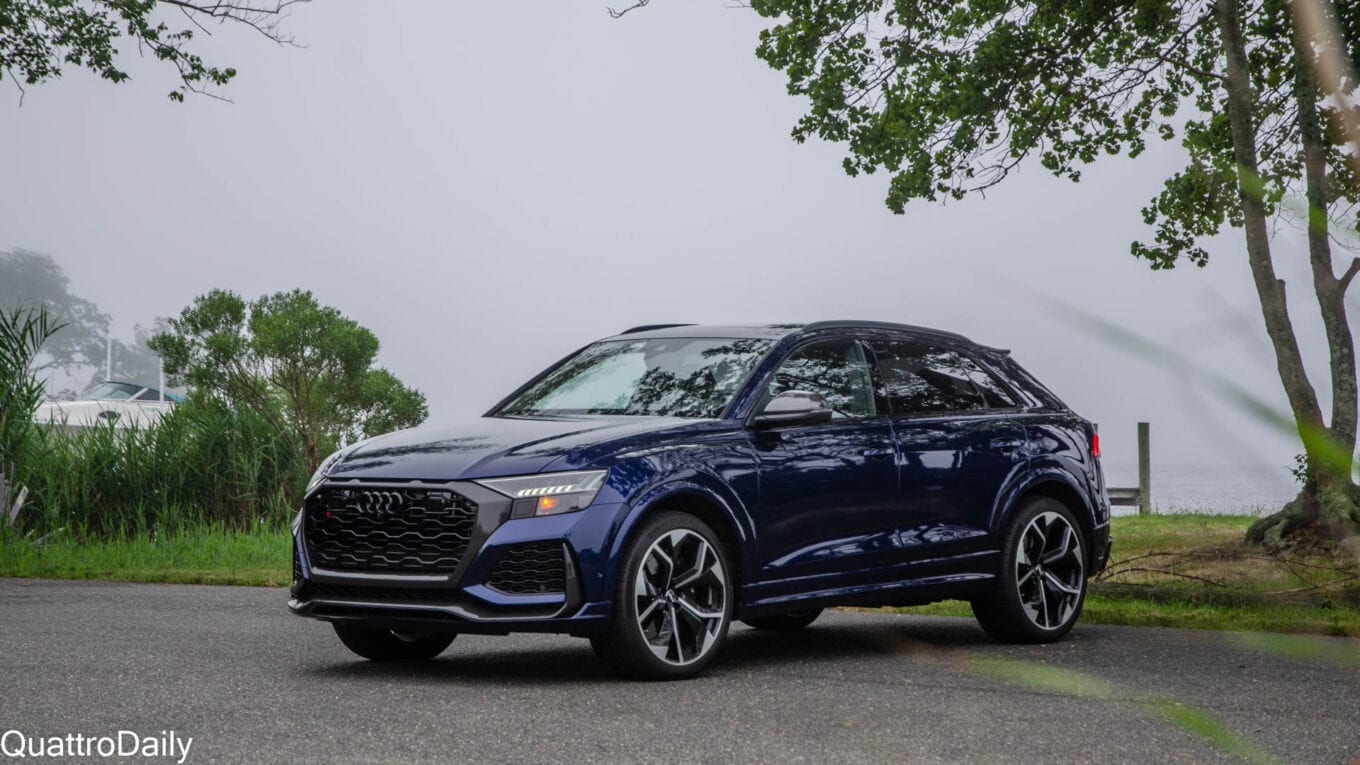 I’m personally not overly fond of performance SUVs. In my experience, regardless of how impressive a high-powered SUV is, it’s never as fun as an actual sports car. And the added sportiness usually only makes it worse as an SUV. However, the last couple of these performance SUVs from Audi actually began to change my mind a bit. The Audi SQ7 and SQ8 were both shockingly good all-around vehicles, ones that I’d consider buying myself, if I had the cash. So, naturally, I was very excited to test out the Audi RS Q8, the most powerful, highest-performing SUV Audi’s ever made.

Both the Audi SQ7 and SQ8 are powerful, fast SUVs but they’re also a bit more relaxed than a proper Audi Sport product. With their 500 horsepower V8s and luxurious cabins, they’re both great everyday, all-around SUVs with the power and speed of a sports car. However, the RS Q8 packs even more power, far more capability, and better performance. 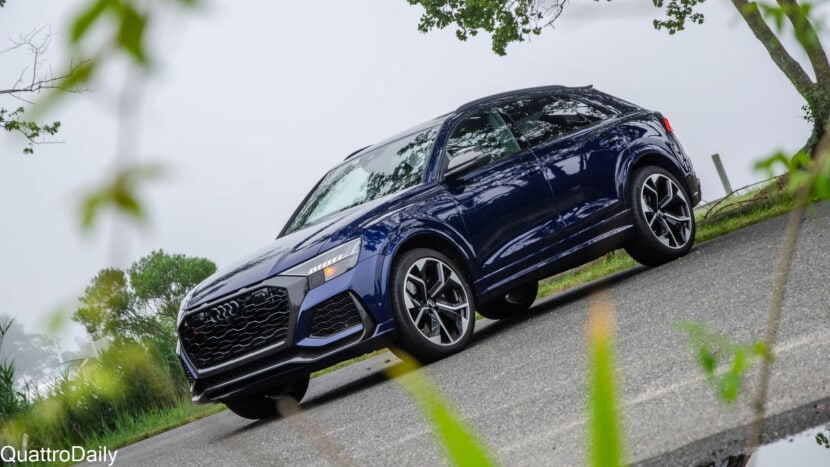 Under the hood lies the same 4.0 liter twin-turbocharged V8 that powers the Audi RS6 Avant, giving it 591 horsepower and 590 lb-ft of torque. It’s one of Audi’s all-time great engines; effortless power, silky-smooth delivery, and a V8 rumble and growl that reminds you you’re not in a typical family SUV. What’s fascinating is that it packs quite a bit more power than the standard ‘S’ cars but it never feels any less refined. Interestingly, it never feels significantly faster, even though it is, which is likely a byproduct of its perfect manners.

It’s certainly more effective, though. Stomp the go-pedal in the RS Q8 and it will make you forget everything you think you knew about physics. Vehicles as big and as heavy as the Audi RS Q8 should not be as fast as it is. What’s lovely about it is that it always pulls, and always feels happy to do so, regardless of the speed, gear, or rpm. It’s just instant, effortless power, all the time.

Audi also deserves applause for its engine sound inside the cabin. I’m pretty sure it’s synthetically enhanced with some speaker trickery, which is a common practice in today’s premium performance car world. However, Audi seems to have placed said speaker trickery more toward the back of the cabin, thus making it sound like real exhaust noise. In most modern luxury performance cars, the interior engine/exhaust sounds feel ambient, as if they’re all around you. BMW is often guilty of this, whereas the sound in the Audi RS Q8 feels a bit distant, as if it’s genuinely coming from the exhaust pipes behind you. It’s nice, actually. 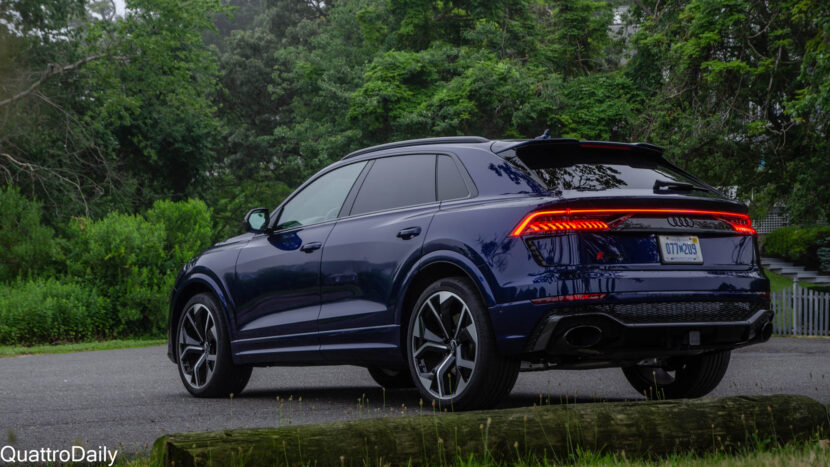 Honed at the Nürburgring

I remember talking to an Audi exec at the 2019 LA Auto Show, when the RS Q8 was first revealed. Audi timed its reveal to coincide with the announcement that the RS Q8 had broken the SUV lap record at the Nürburgring. During my conversation with the Audi exec, we were discussing the car’s handling and he essentially said that the proof of its capability is in the Nürburgring time. For any skeptics that might feel the RS Q8 would be just another SUV with a big engine, Audi proved its worth at the ‘Ring and you can feel it.

There’s an incredible stability and ease-of-use with the Audi RS Q8, even when pushing it hard, as if it’s capable of so much more than you can throw at it because, of course, it is. Despite being a big old brute, the RS Q8 never feels too tall, out of sorts, or nervous. It manages its weight incredibly well and lacks any sort of significant body roll. After driving it, not only do I have no doubts about Audi’s Nürburgring claims but I also have no doubt that the RS Q8 would go toe-to-toe with the best driving SUVs in the world and hold its own. Lamborghini Urus and Aston Martin DBX? I’d be willing to bet the RS Q8 would give both cars a real fright. It’s a genuinely impressive piece of kit. 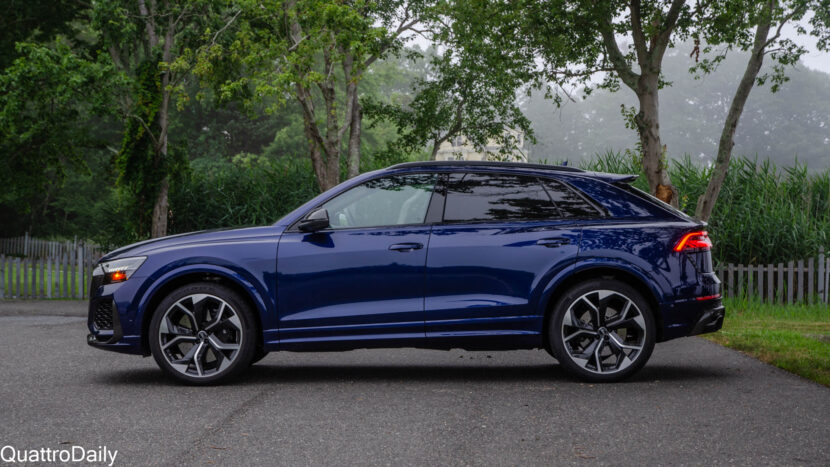 What’s even more interesting is that the Audi RS Q8 is more fun than I imagined. Again, I’m not a huge SUV guy. Sure, the SQ7 and SQ8 were great to drive in a calm, but fast, manner but they weren’t exactly fun. I never thought the RS Q8 would actually be sports car-fun but it is. Remarkably, the steering is accurate and has decent weight to it. It’s completely numb but that’s to be expected from a performance Audi SUV and not really an issue. Still, it allows you to place the big car with ease and it responds well to you inputs. The RS Q8 could rival much smaller sports cars on a twisty back road and confidence in its steering has a lot to do with that.

Potentially even more important than that, though, is its ride. During my week with it, I was amazed at its ability to soak up bumps, despite riding on massive 23″ wheels. That’s another byproduct of its Nürburgring training. The ‘Ring is far from a smooth track, with severe bumps, off-camber turns, and the famed Karussell is a 180-degree turn filled with concrete patches in the middle of the pavement. An overly stiff car will struggle at the ‘Ring, especially one as heavy as the RS Q8. However, the big Audi’s more supple suspension allowed it to soak up those Nürburgring bumps, helping it to set its blistering 7:42 lap time. 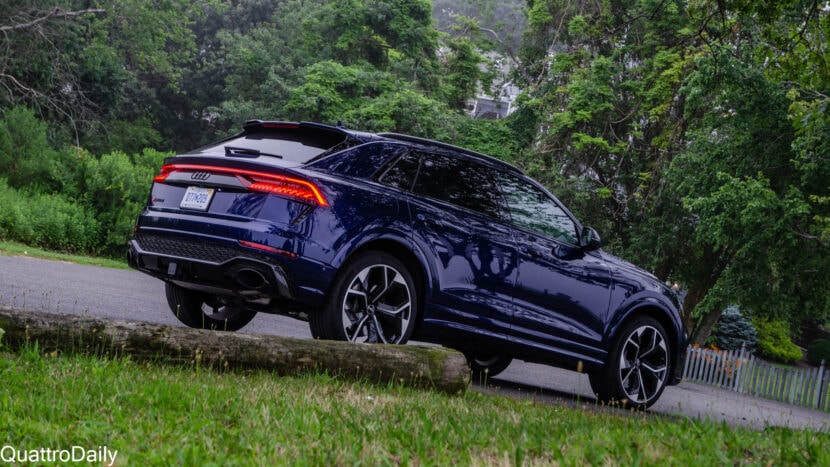 That same Nürburgring-honed air suspension made easy work of soaking up rough New Jersey pavement, as well as insulating the cabin from the NVH that comes along with it. Whoever is working on Audi Sport’s suspensions deserves a raise because the RS Q8 not only manages to keep its weight in check while driving quickly but it also manages to keep it comfortable as well.

Obviously the Audi RS Q8 isn’t as comfy as a standard Q8, or even the SQ8, but it’s far from being too stiff and is perfectly pleasant to spend hours in. Without question, the RS Q8 can be used as a do-it-all family car.

It looks flipping mean, too. My test car’s Navarra Blue exterior wasn’t the most exciting (I was hoping for Java Green or Dragon Orange) but it added some menace to the car’s looks. The dark blue looked almost black in some lights and the Black Optics package, which turned all of its trim bits and even parts in the wheels black, helped with that.

My only real disappointment came inside the cabin, though. It’s typical Audi; great looking, packs excellent tech, and has comfortable ergonomics. However, the RS Q8 just doesn’t feel special enough inside to justify its price tag. Such is the case with all Audi Sport models, though, as their interiors are never different enough from the standard cars on which they’re based. In Audi’s defense, the standard interiors are already very good, so there’s not too much to objectively complain about inside, but I still wish it was a bit more special inside. 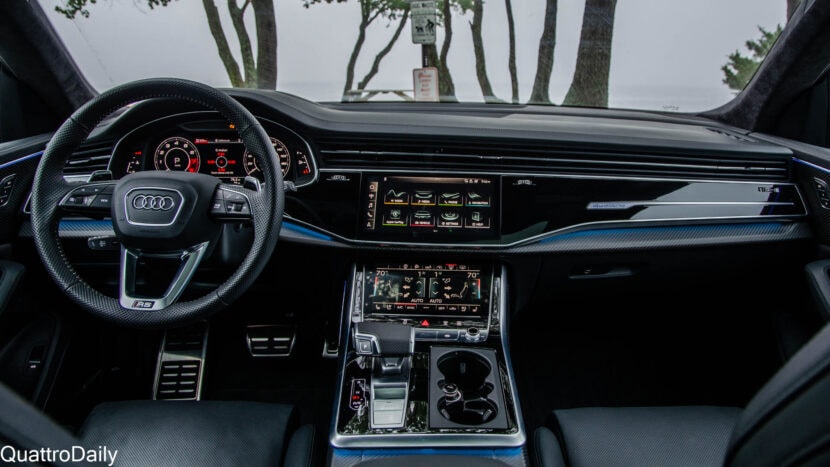 The rest of the cabin is great, though. Wireless Apple CarPlay worked perfectly, Audi’s Virtual Cockpit is as brilliant as ever, and — being a Q8 — its back seat perfectly fit a child seat with ease. The RS Q8, despite its mega performance, remains a fantastic car to haul a family in.

Do it All Performance Machine 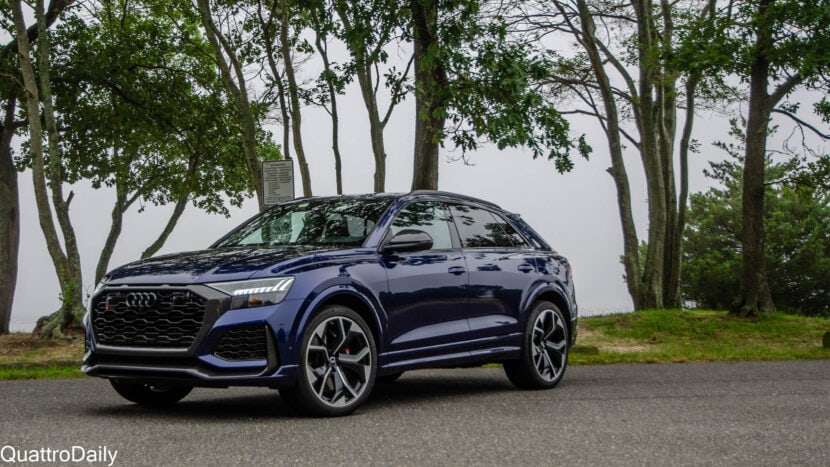 The Audi RS Q8 is a sharper, more fun, and quite a bit faster. Admittedly, it’s also more expensive, with a starting price of $114,500. Adding insult to injury, my heavily optioned test car’s price ballooned passed $130,000. That’s almost $50,000 more than the starting price of an Audi SQ7 or SQ8. Is it worth it? In my personal opinion, yes, actually.

Usually I err on the side of frugality but it’s hard to deny the benefits of owning the Audi RS Q8 over its lesser siblings. It brings a lot more performance, without sacrificing much in the way of ride comfort, and keeping all of the same great tech. It also keeps the exact same practicality as the SQ8 or even the standard Q8. There’s nothing the RS Q8 does poorly and if you buy one, you won’t regret a day you spend with it. 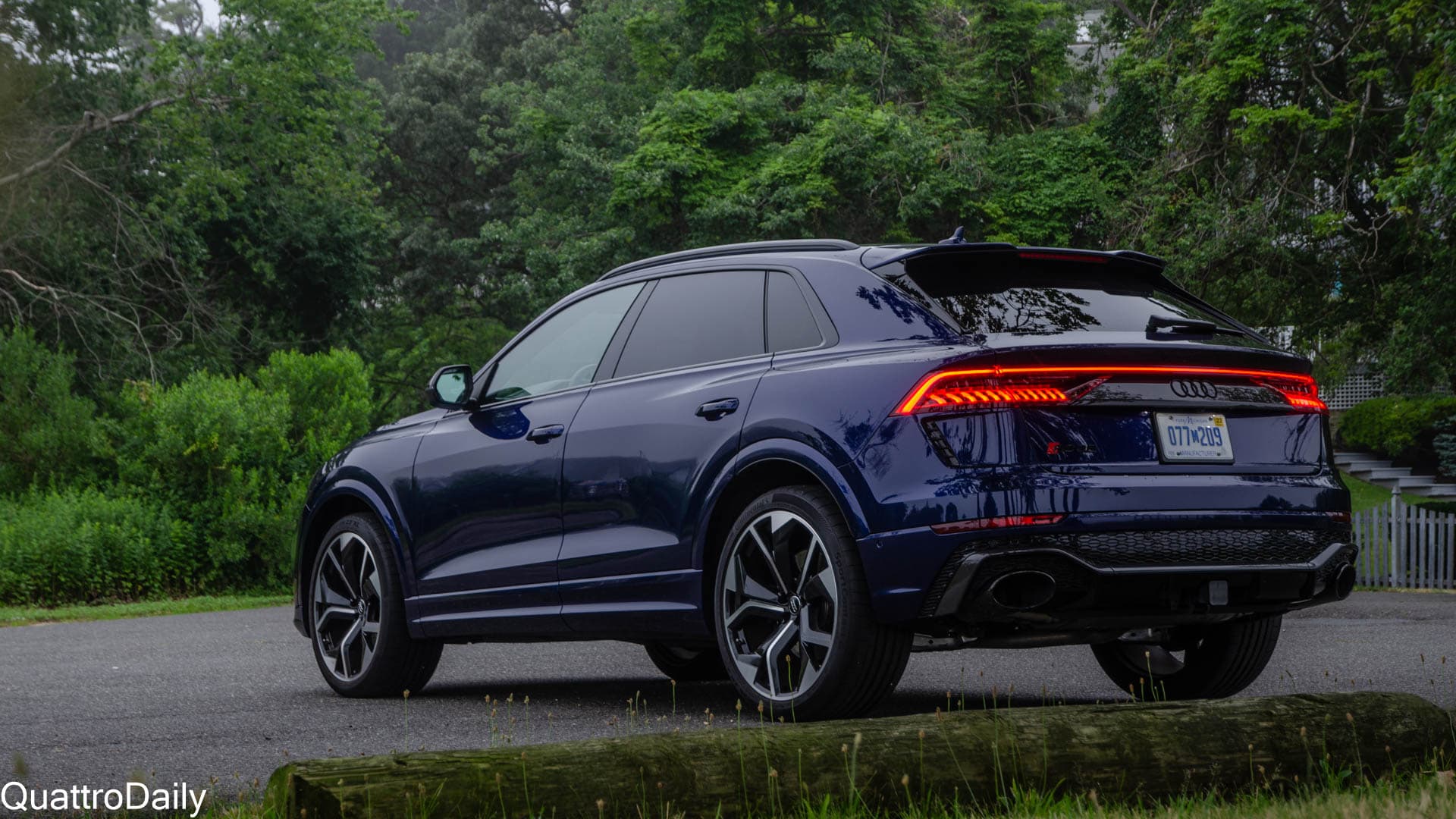 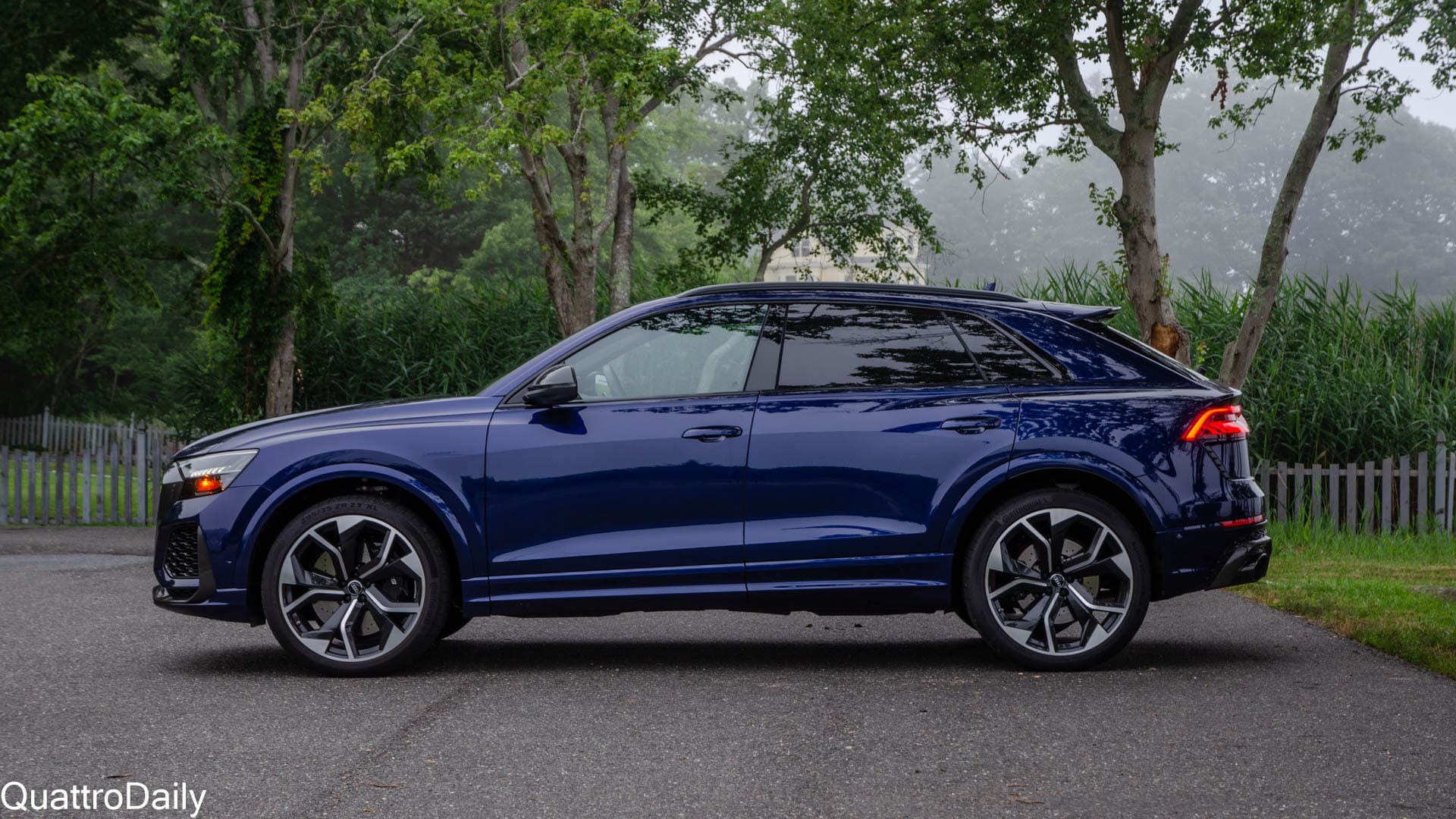 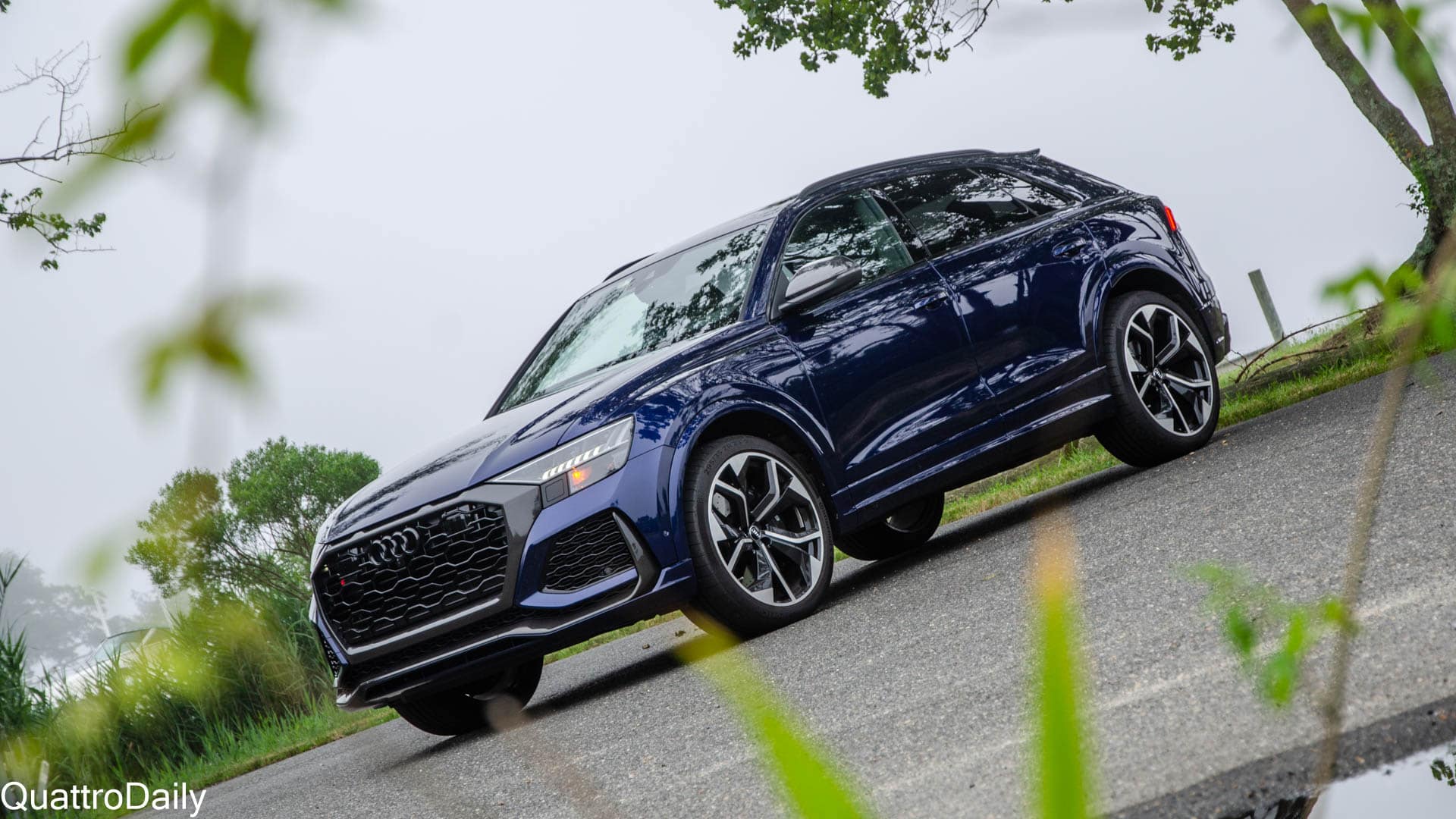 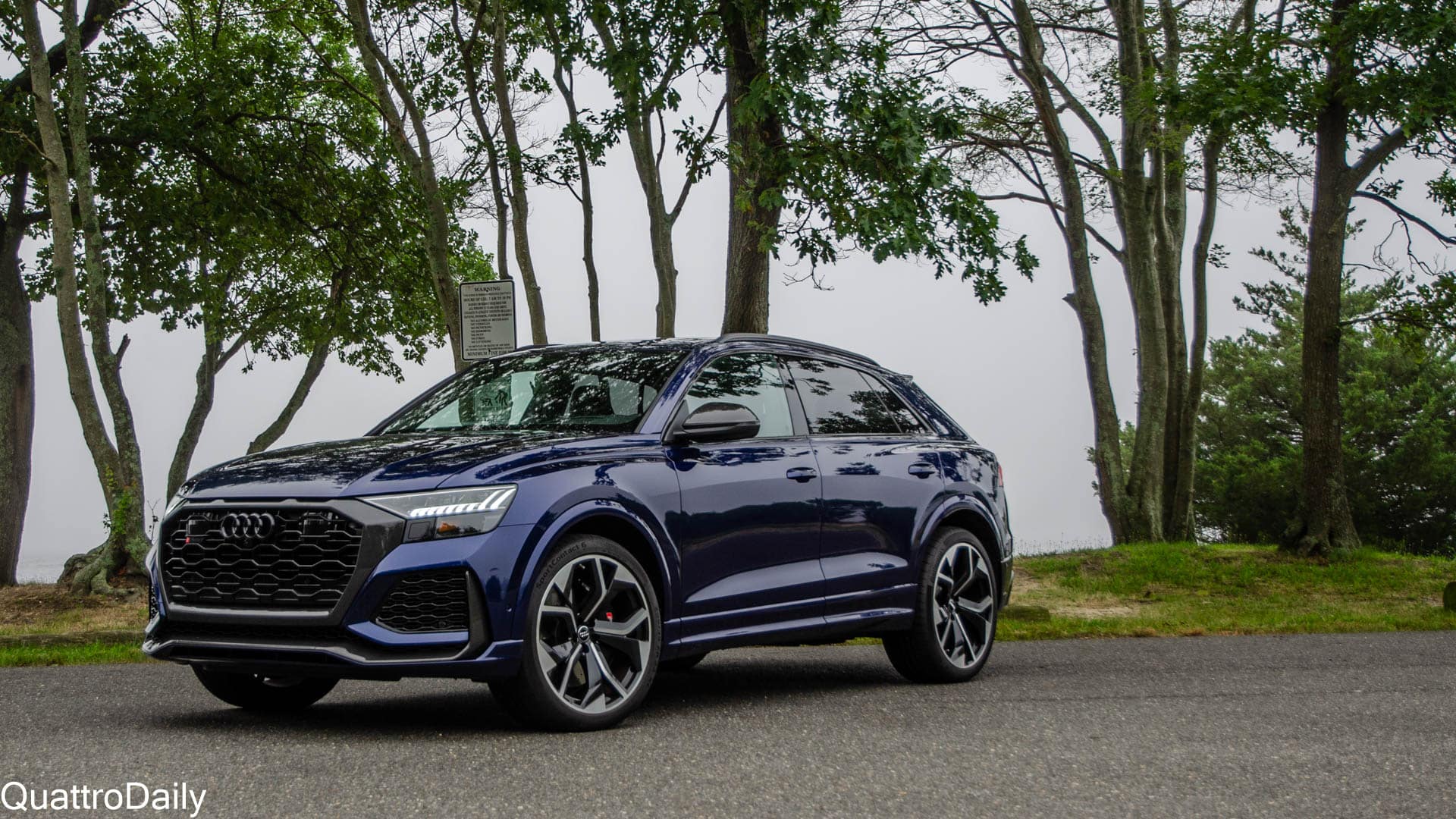 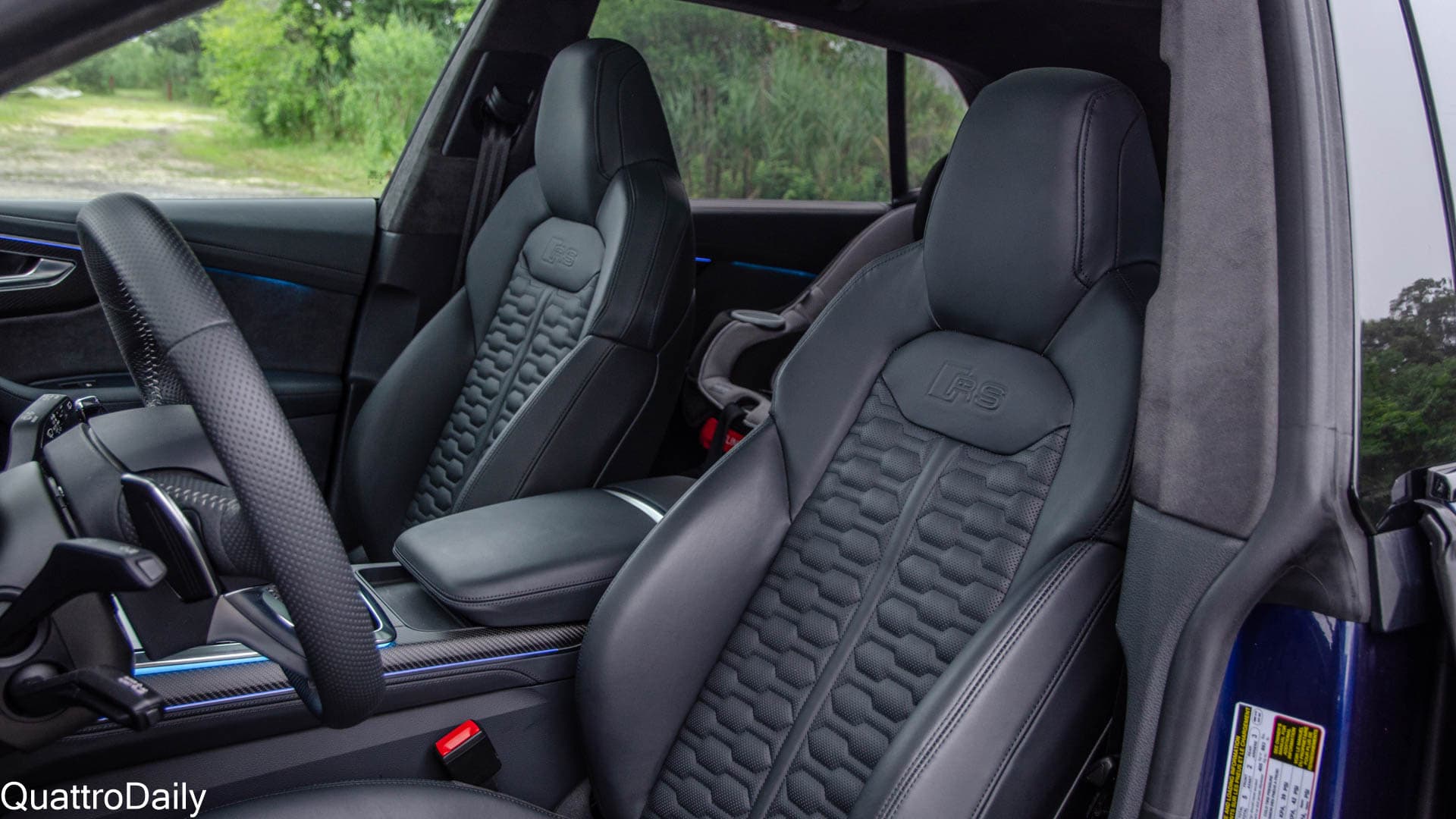 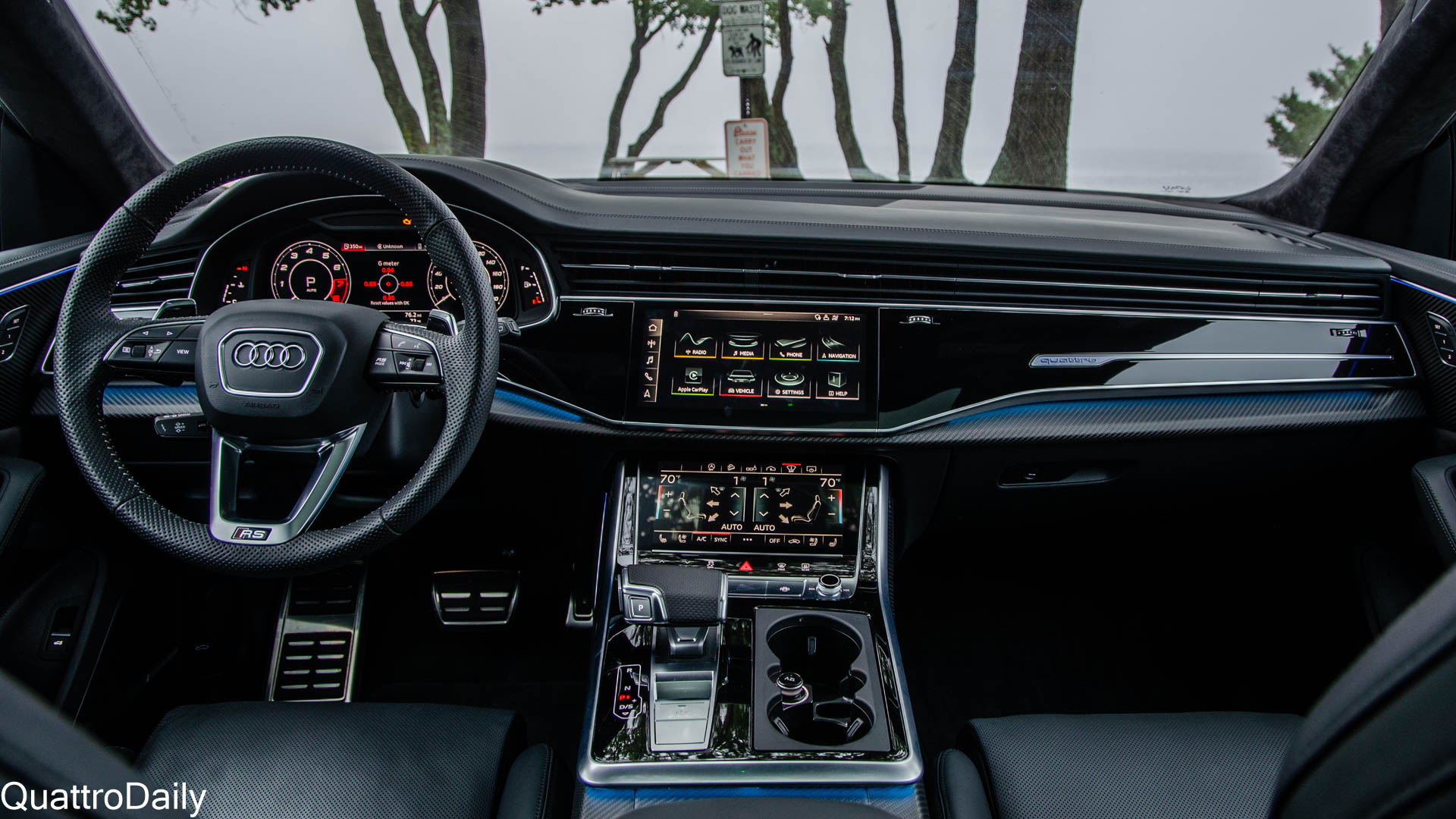 The Audi RS Q8 is an excellent all-around SUV package, with power, performance, comfort, and practicality.