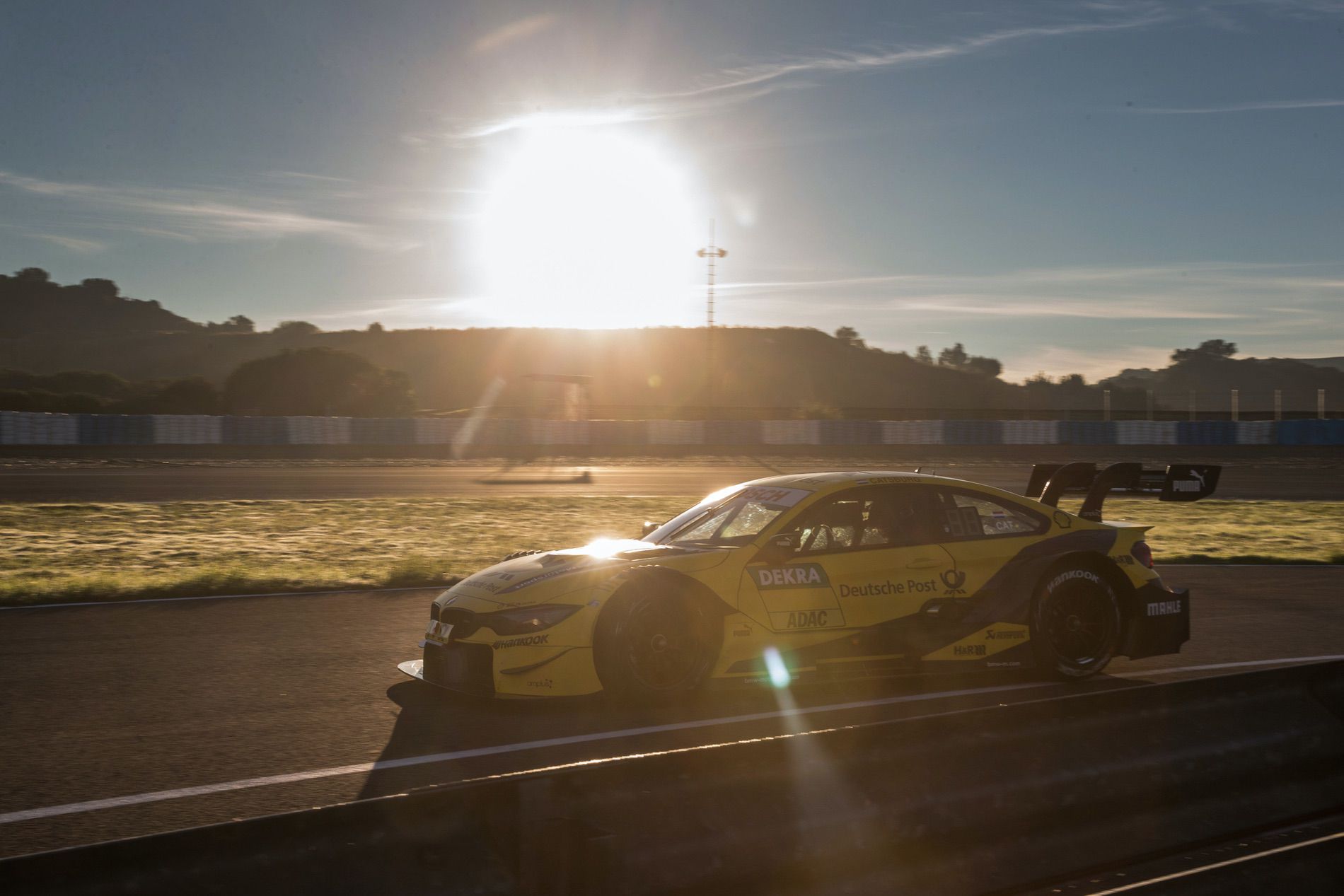 Jensen completed his second year of training as a BMW Motorsport Junior in 2018. The 23-year-old was a regular driver in the ADAC GT Masters, in which he shared the cockpit of the BMW M6 GT3 with Timo Scheider (GER). Catsburg is a permanent member of the team in the BMW M8 GTE in the FIA World Endurance Championship (WEC), and also makes regular appearances at the wheel of the BMW M6 GT3. 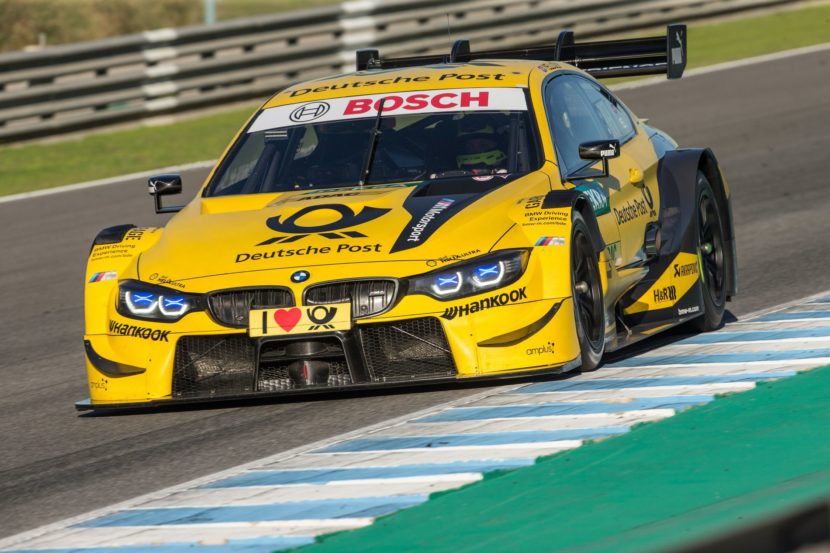 Yelloly is another familiar face in the BMW family. The 28-year-old Brit drove the BMW M6 GT3 for ROWE Racing in this season’s Blancpain GT Series Endurance Cup. Yelloly’s Formula racing has taken him right up to GP2, and he has been successful in one-make cups for several years. 19-year-old van der Linde caught the eye on the GT scene last year. He finished runner-up in the ADAC GT Masters and came home third to claim a spot on the podium at the 24 Hours of Spa-Francorchamps (BEL).

The four drivers took to the track at Jerez de la Frontera in the 2018 DEUTSCHE POST BMW M4 DTM. BMW DTM driver Philipp Eng (AUT) took the car out for its reference laps.

BMW M Motorsport also used the three-day test to continue development work on the BMW M4 DTM for the 2019 season, which has been modified in line with Class 1 regulations. BMW DTM drivers Marco Wittmann (GER) and Bruno Spengler (CAN) alternated at the wheel of the car, which is powered by a newly-developed turbo engine. 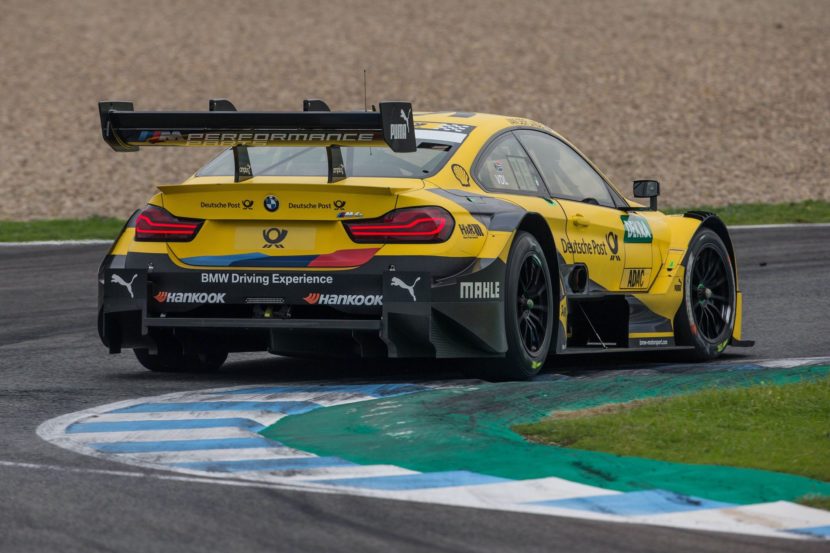 Mikkel Jensen:
“I know the BMW M4 DTM as a race taxi, but to drive the real race car in a test on the track is something different. You think you could use you experience from the taxi but you have to put the car on the limit in a different way. You have to really fine-tune your driving style to be fast and there is always something you can find in every corner. That was really interesting. The carbon brakes are amazing, as they bite really hard. It was fantastic to feel how the car was stopping. And the high-speed corners: when you are used to GT cars, you think you sit in the same type of car. But the BMW M4 DTM just goes so much faster in the corner.” 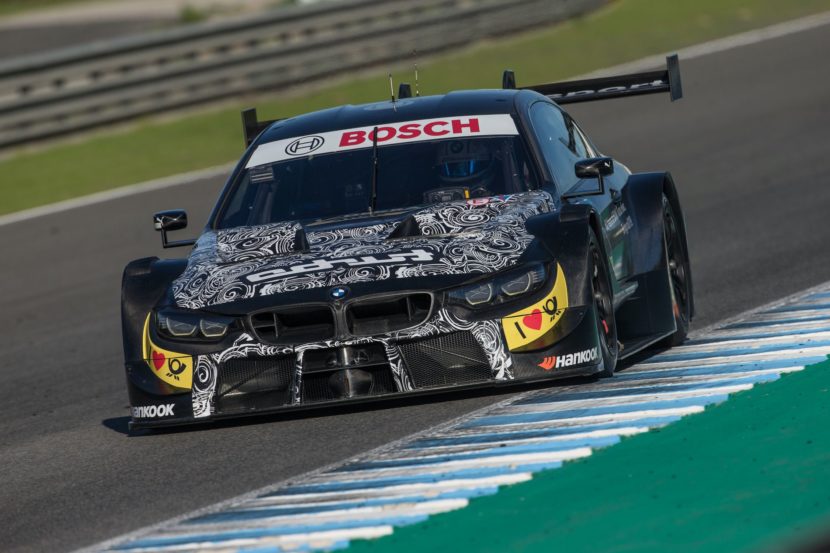 Nick Catsburg:
“It was definitely a lot of fun. The big difference to the BMW M8 GTE and the BMW M6 GT3 I usually drive is the high-speed cornering. The downforce level is much higher and the braking was something I had to get used to. The BMW M4 DTM is a very impressive car, pretty much as I expected as I had already heard that it’s really cool car – and that’s honestly true. A very cool car to drive.”

Nick Yelloly:
“It was great fun to drive the BMW M4 DTM, I really enjoyed it. A big thank you to BMW for giving me the opportunity. Considering the weight of the car, the high-speed in the corners is really fantastic. As I have driven high downforce cars before I knew what to expect but the BMW M4 DTM still impressed me a lot.“

Sheldon van der Linde:
“It was an amazing experience. It’s so different to what I am used to. I have only driven in GT3 before so it was a really big step in the beginning, but the engineers and everyone helped me a lot and Philipp also gave quite a few tips. What I liked most about the BMW M4 DTM is the downforce. It’s incredible and the speed you can enter the corners with is amazing.”

Marco Wittmann:
“Our job at the tests was to make progress with the development of the new car. One focus was on the new turbo engine: it is important to understand this better, and to fine tune it, from test to test. The engineers, teams and us drivers obviously still have a lot of work ahead of us, to be well prepared going into the new season. After all, this is the start of a new era in the DTM. However, we are all excited and very much looking forward to it. More power is always cool for us drivers. The test at Jerez was another important step towards the new season and we have now all – drivers, mechanics, engineers – earned our Christmas. I would like to wish the fans, who can look forward to an exciting DTM season in 2019, a very merry Christmas.”

Bruno Spengler:
“We are progressing well with our work on the BMW M4 DTM for the coming season. The conditions have been consistent, we completed a lot of laps, and made good progress through our planned programme. That is very important, as we only have a certain number of test days. It was a productive test and I am now looking forward to a few quiet days ‘between the seasons’ with my family. I would like to wish the whole team and all the fans, who support us all year round, a merry Christmas and a happy New Year.”