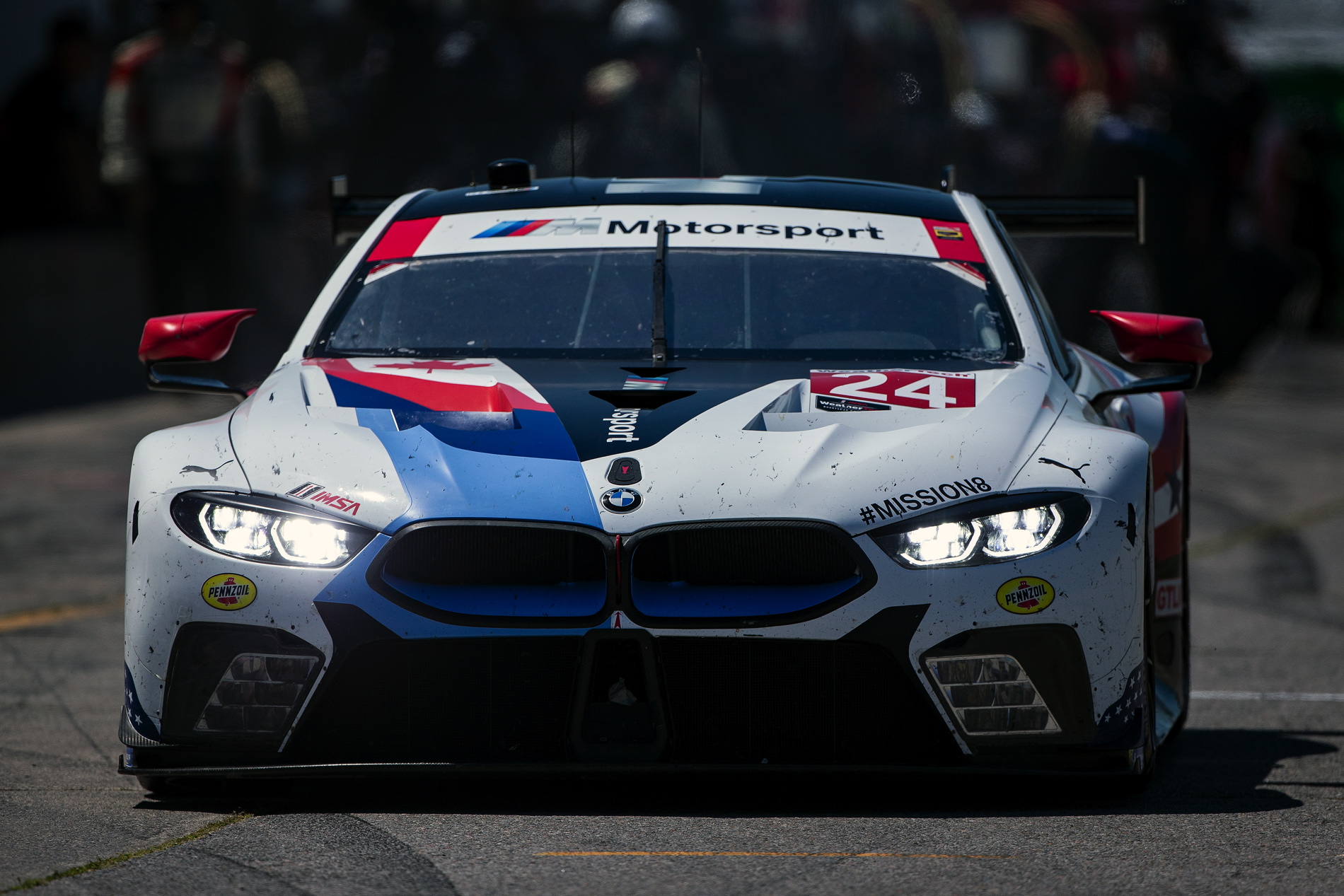 BMW Team RLL finished the Mobil 1 SportsCar Grand Prix, at the Canadian Tire Motorsport Park, in Bowmanville, Ontario, Canada, in the seventh and eighth positions in the GTLM class, the result belying a race that saw both BMW M8 GTE machines lead some portion of the contest.

The No. 25 BMW M8 GTE finished seventh – only 13.7 seconds from the class winning No. 67 Ford – with Connor De Phillippi and Alexander Sims sharing the driving duties. The No. 24 BMW M8 GTE, of John Edwards and Jesse Krohn, was forced to retire from the lead of the race on lap 61 after contact damaged the car. 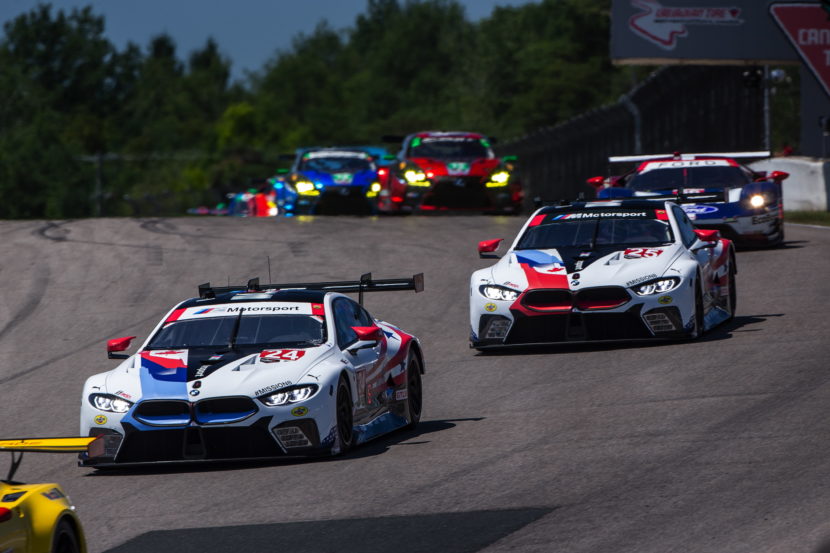 The first caution period of the two-hour-and-forty-minute race came only 15 minutes into the contest and the team elected to split strategies between the two BMWs. Sims pitted the No. 25 M8 GTE from seventh for full service along with the balance of the GTLM field while Krohn stayed out to inherit the class lead. Krohn dropped two positions before pitting for service on lap 45 and handing off to Edwards who rejoined the race in the eighth class position. The third and fourth caution periods
bookended the race’s halfway point with Sims having cycled to first and Edwards close behind in second. Unfortunately, contact with the No. 911 Porsche just two laps after the green flag waved on lap 59 forced the No. 24 M8 GTE to the pits with right rear suspension damage. The car was unable to rejoin the race, retiring after 61 laps completed. 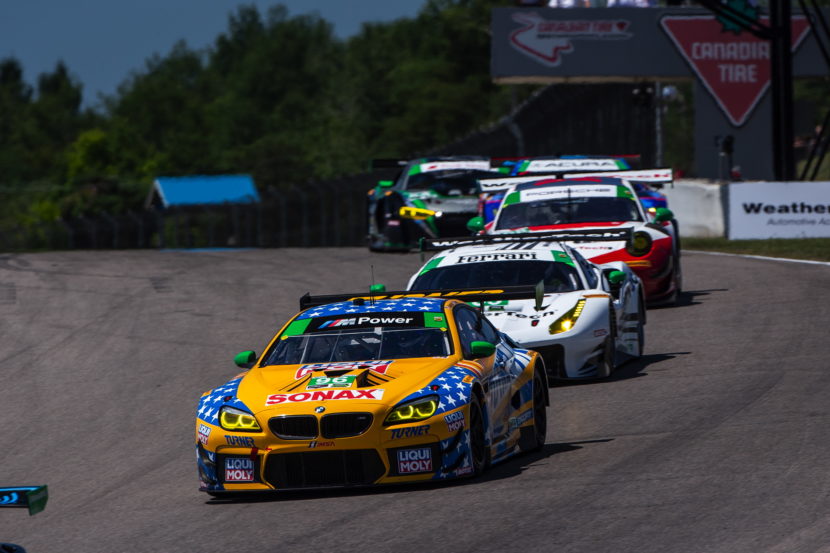 Sims pitted the No. 25 M8 GTE on the same lap, handing off to De Phillippi to finish the race. The Californian rejoined the race in the seventh position, ultimately finishing there after being unable to move up as the race was slowed through two additional caution periods.

BMW Customer Racing Team Turner Motorsport did not enjoy a second consecutive winning weekend. Contact with the No. 58 Porsche forced the No. 96 BMW M6 GT3 to retire on lap 63 after strong drives by co-drivers Bill Auberlen and Robby Foley. 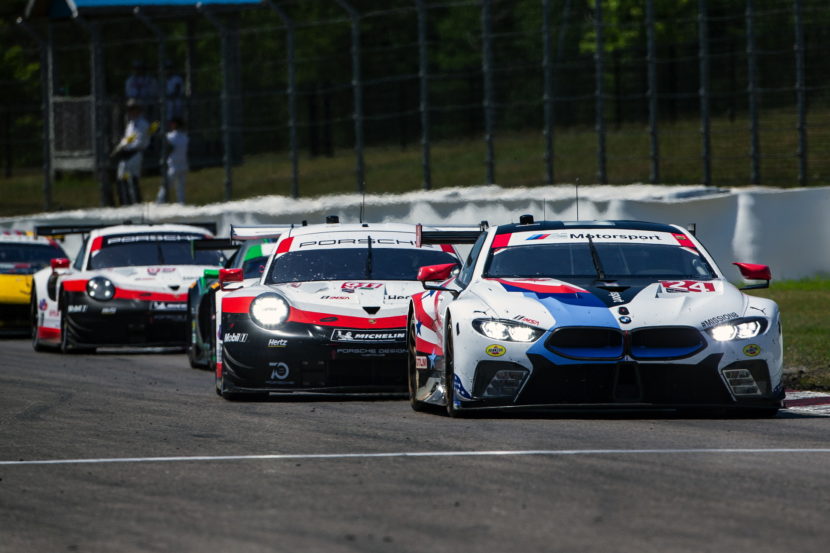 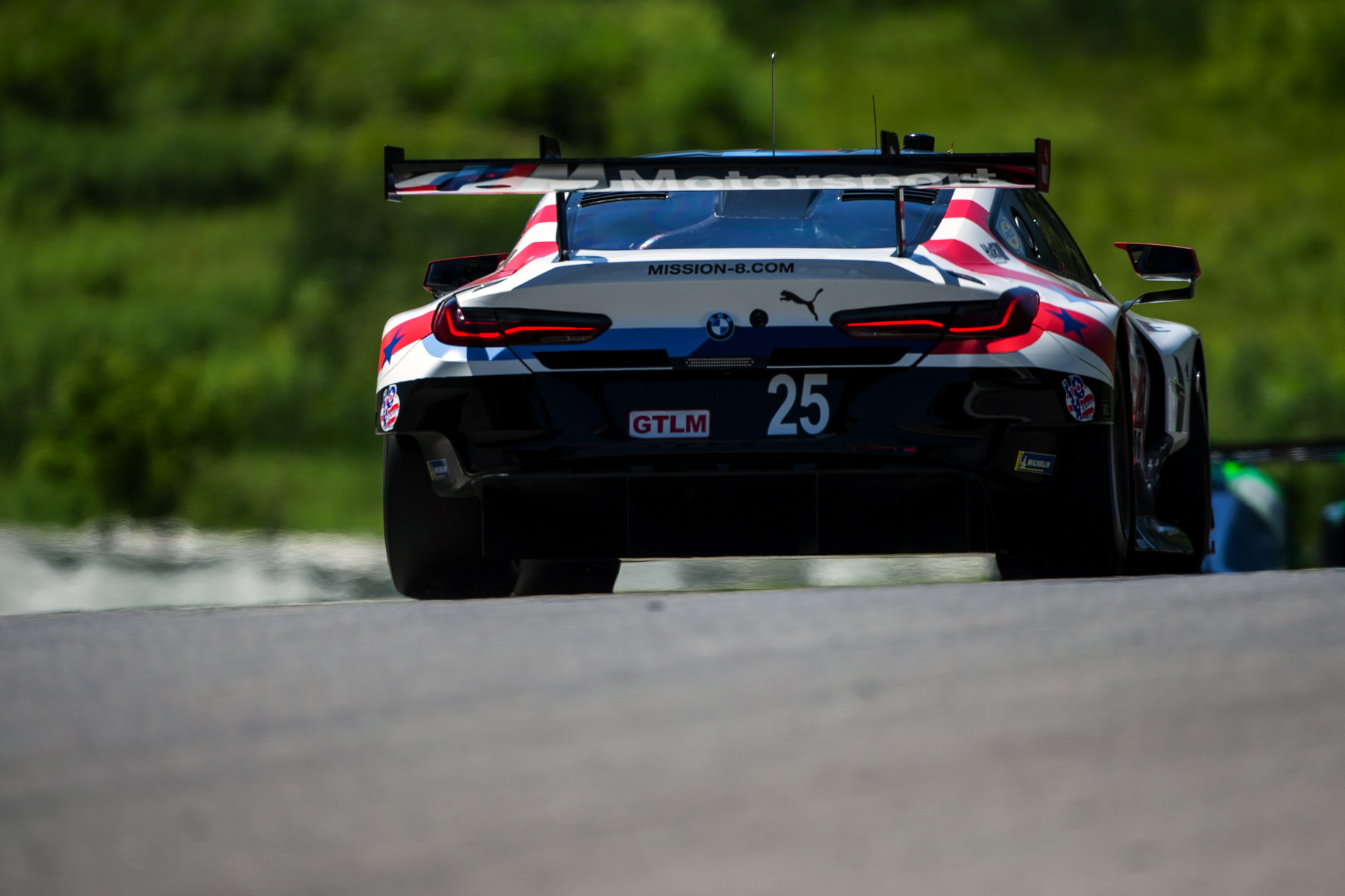 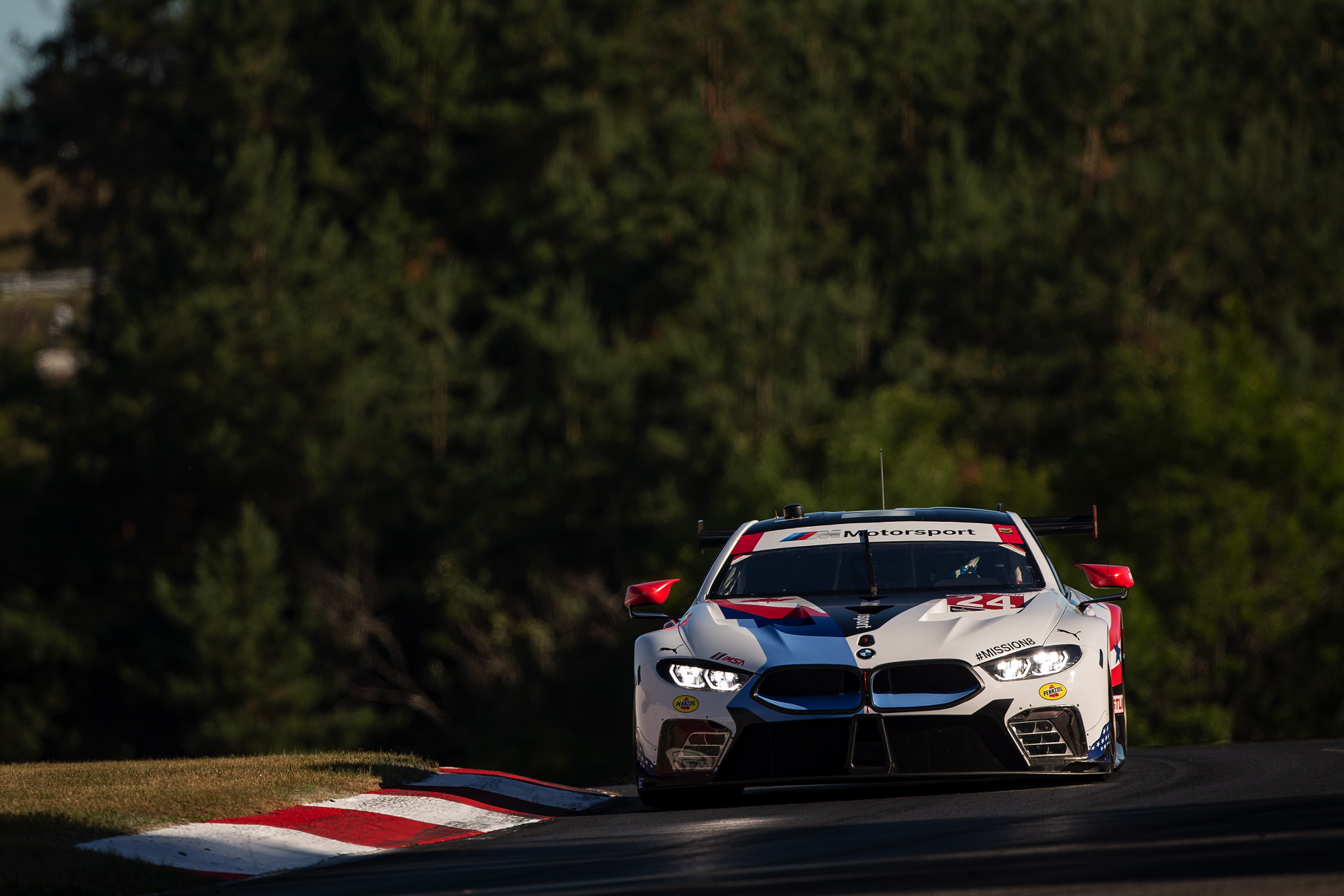 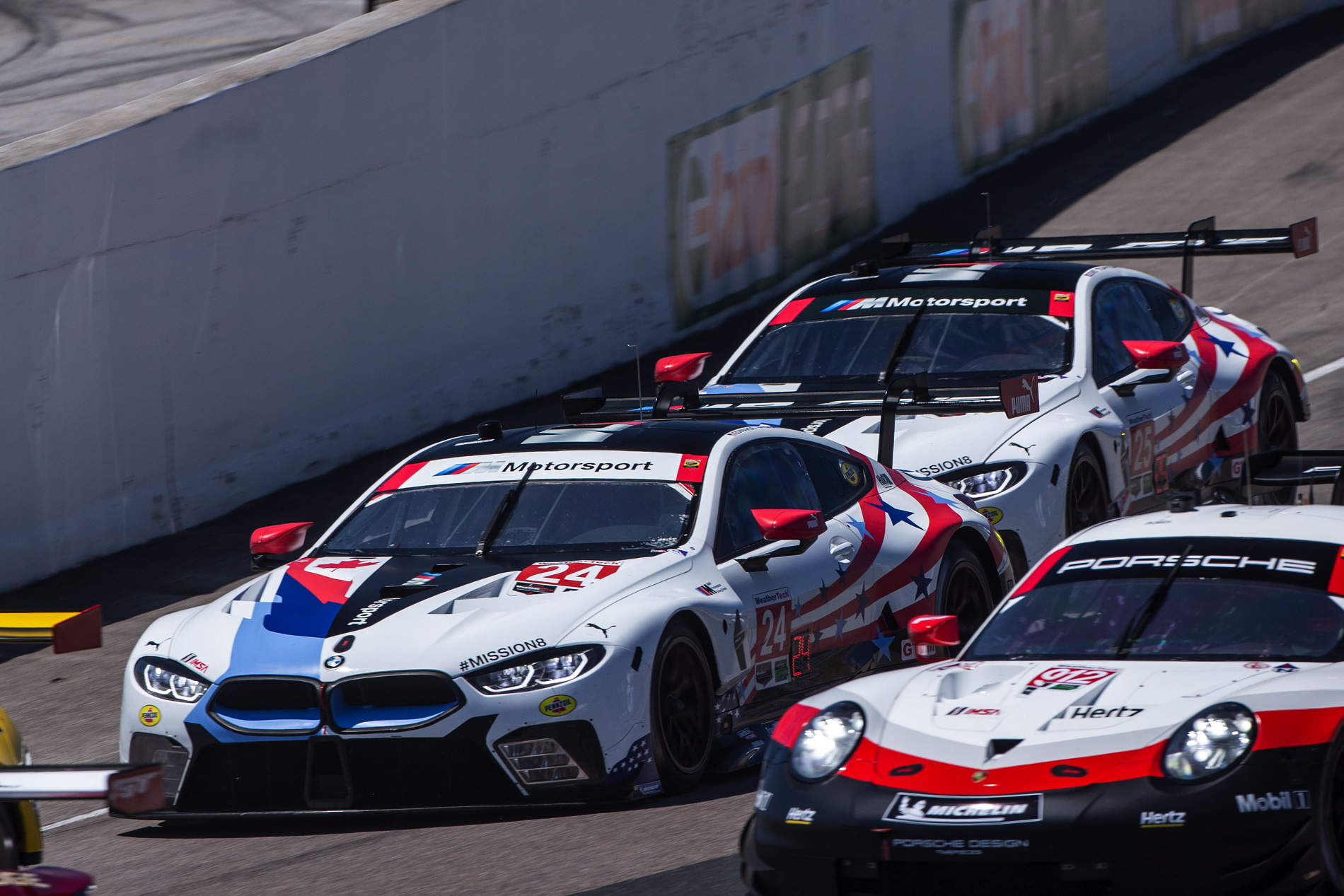 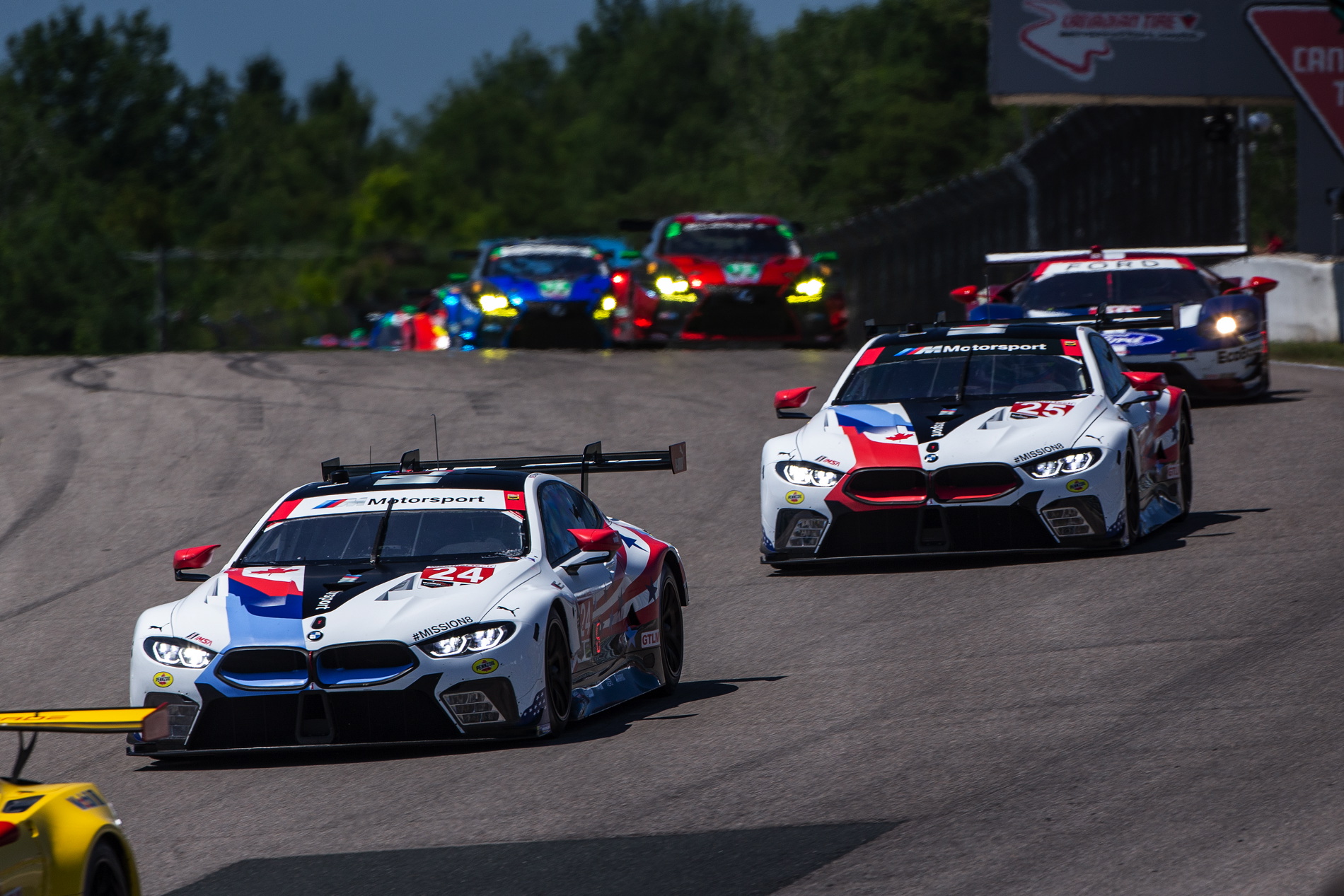 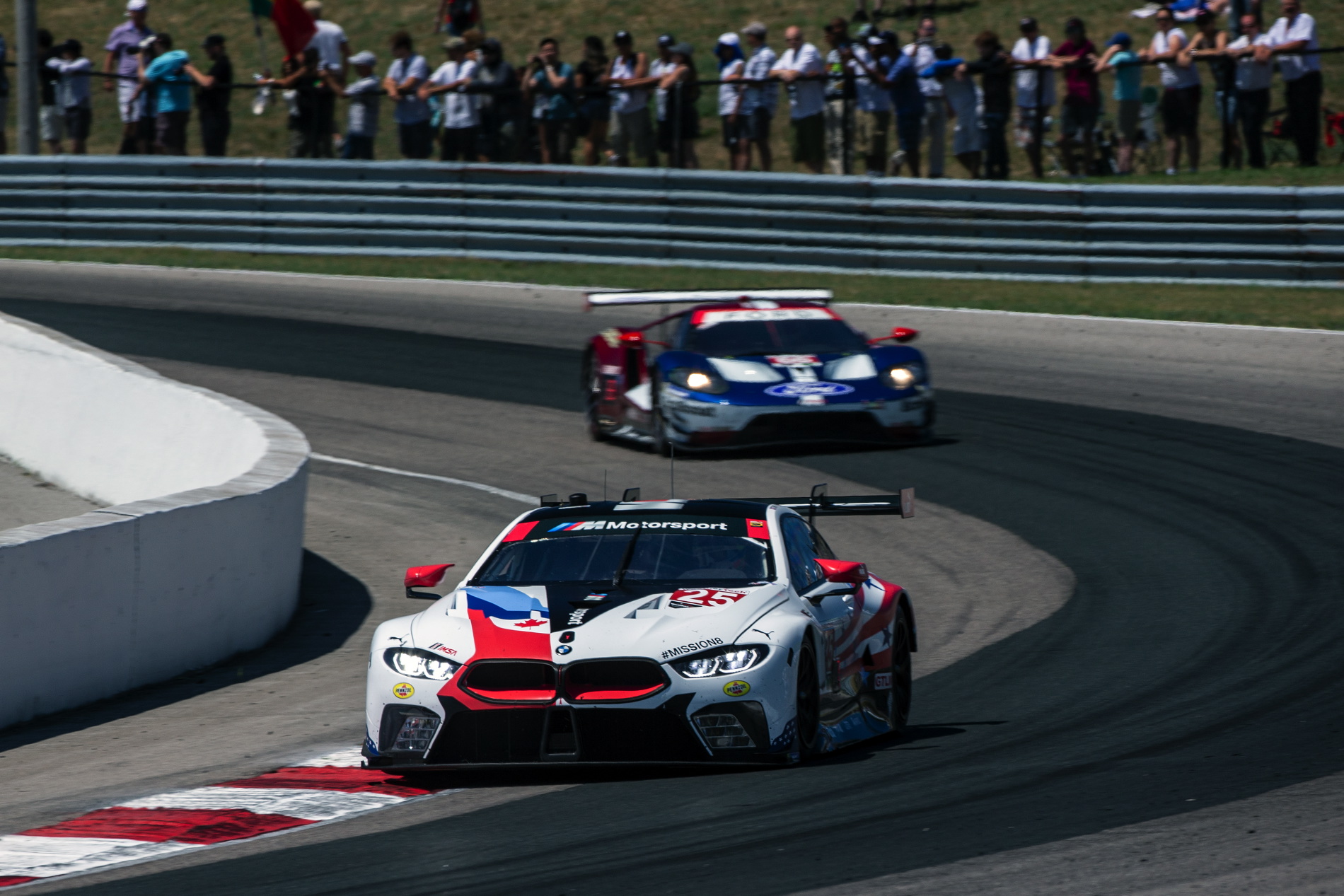 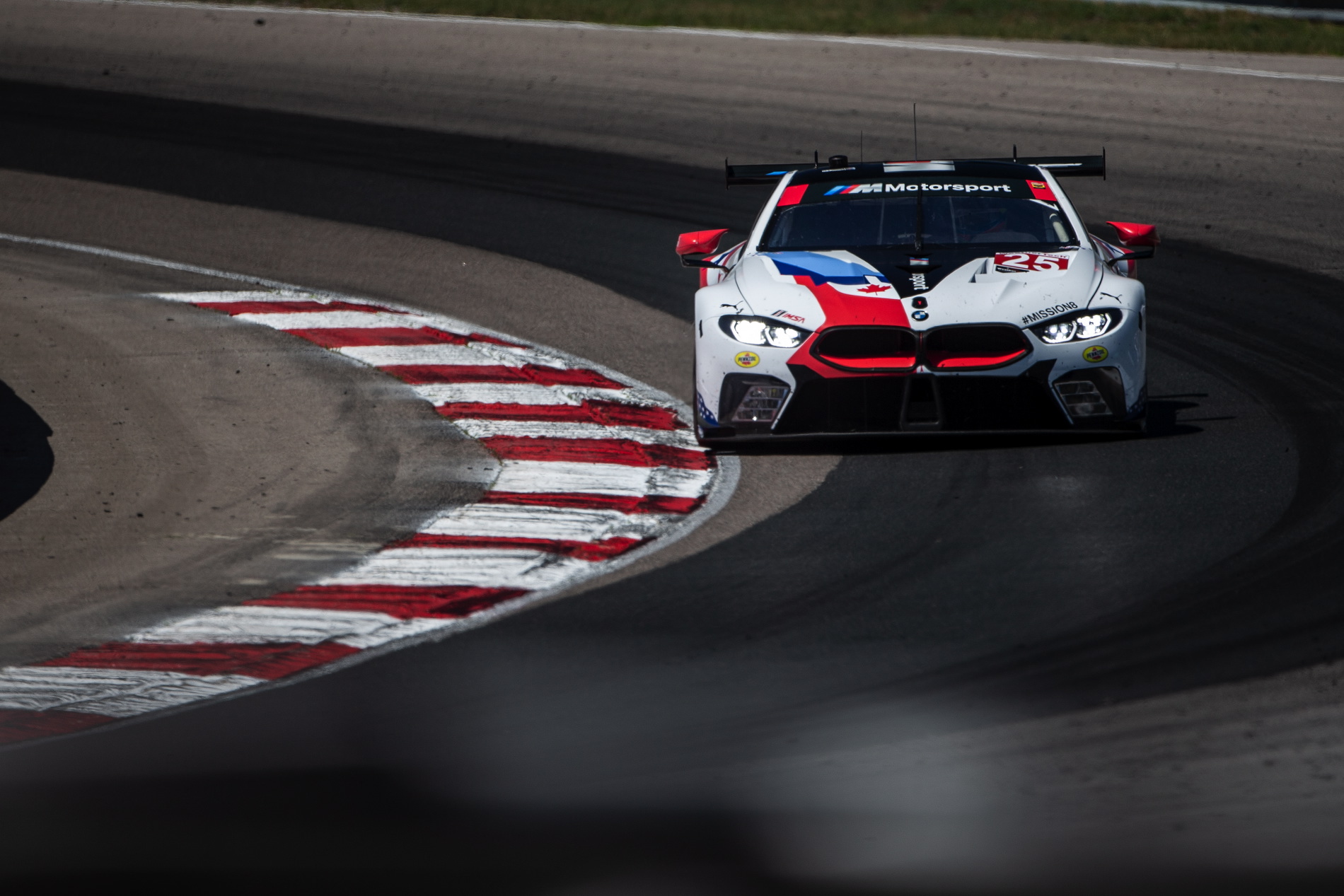 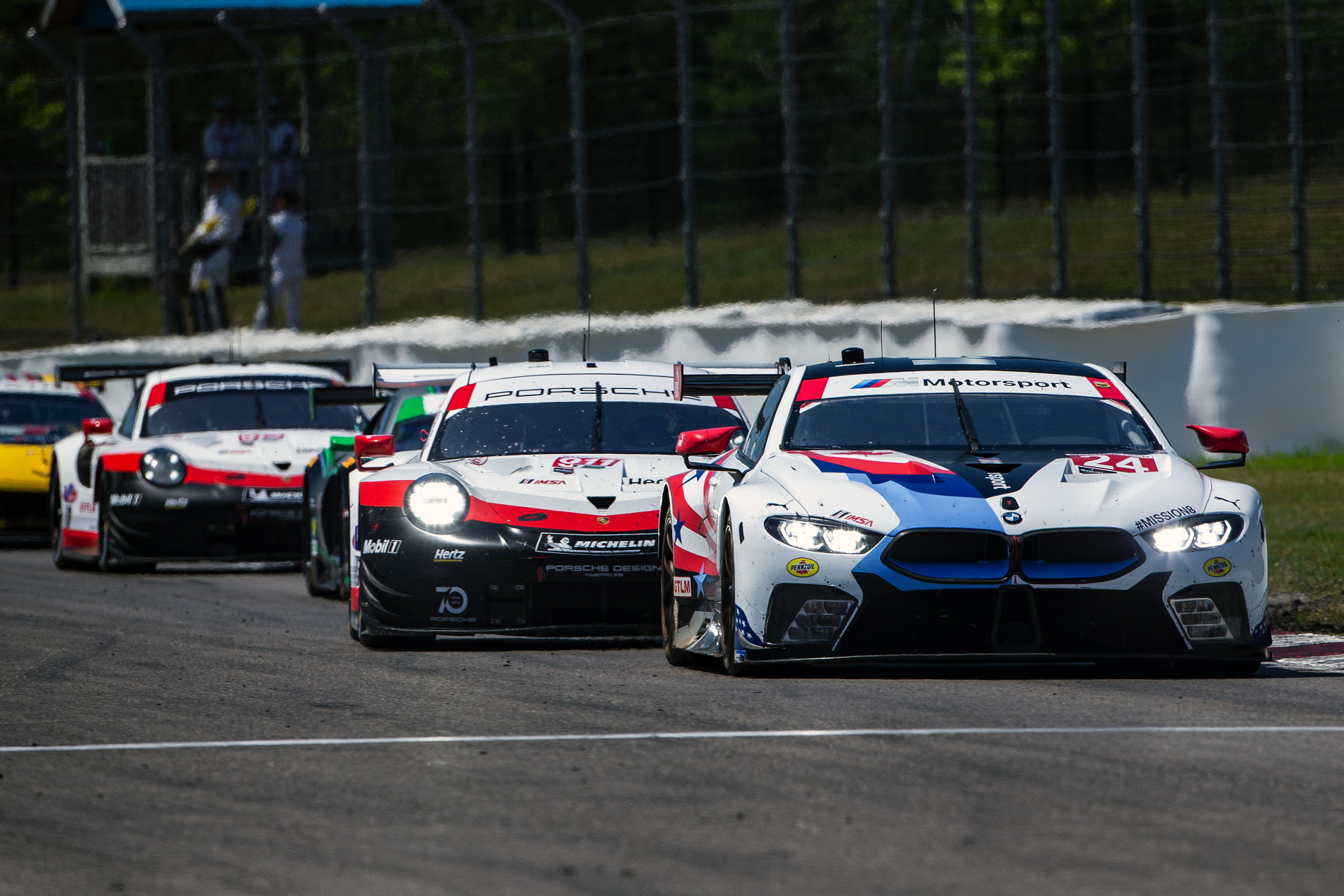 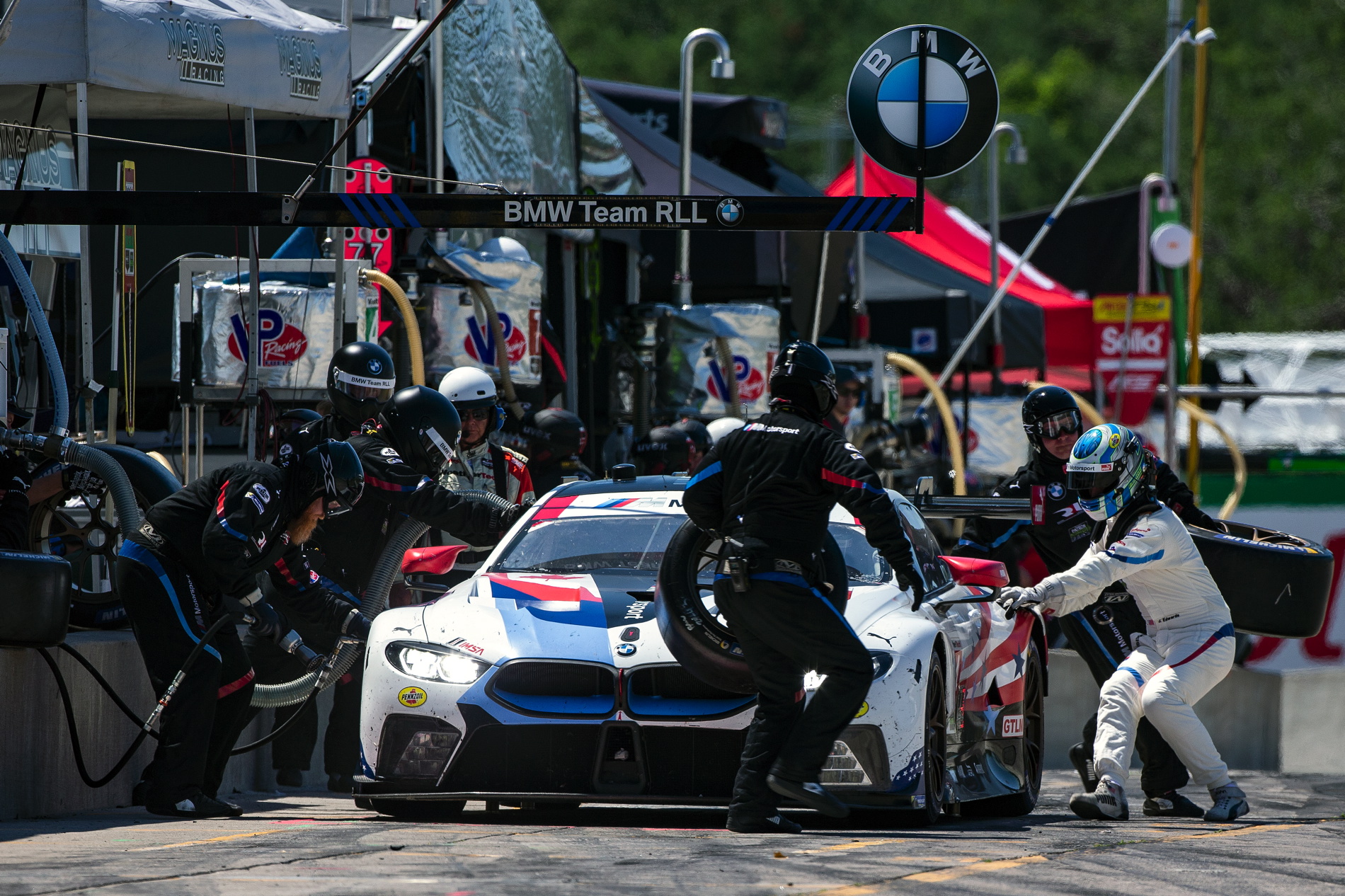 “We split our strategies and both cars benefitted at certain times in the race, but ultimately we didn’t get the result we wanted”, said Brandon Fry, BMW Team RLL Technical and Racing Operations Director.“We thought we were in a good position with the No. 24 but then the contact on the track ended our day.”

Connor De Phillippi, driver No. 25 BMW M8 GTE (P7): “We were a bit out of sequence in the last hour of the race due to our strategy choice. On one of the last restarts we were able to get past one of the Porsche’s, but when battling with a GTD car when we were lapping him we lost the position. It felt great to be in the mix and battling in the last twenty minutes of the race, but we need to continue to work hard.” 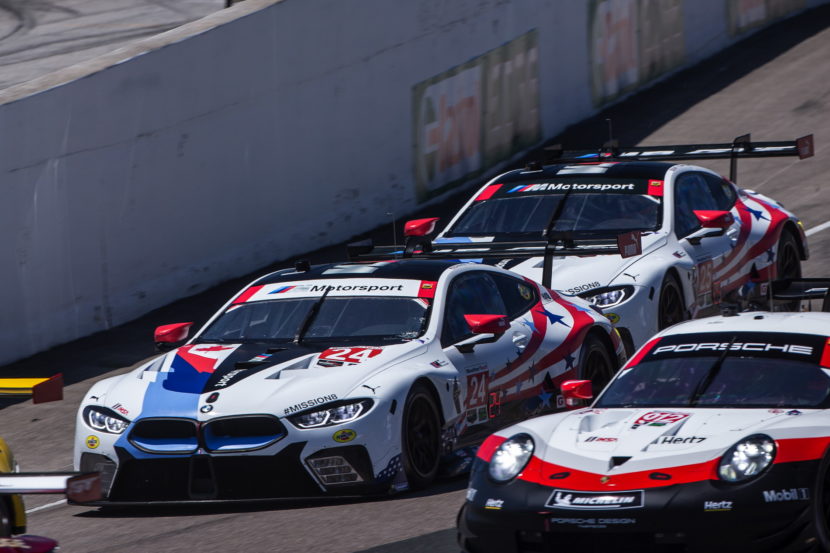 Alexander Sims, driver No. 25 BMW M8 GTE (P7): “If the safety cars worked out a little bit differently we could have been in position for a better result. Unfortunately nothing really played into the strategy. At the end we were in seventh before anyone pitted and finished seventh. Shame for the No. 24. They seemed to have the strategy figured out and it looked like it was working out for them until the contact with the Porsche. Overall it was a good effort from the team.”

John Edwards, driver No. 24 BMW M8 GTE (P8):“The team made a good strategy call splitting the cars on the first yellow. Ultimately I think we had a shot at a podium but we got driven off the road and that ended our race.”

Jesse Krohn, driver No. 24 BMW M8 GTE (P8):“The car felt good, we were close and had a good strategy going on but unfortunately we weren’t given the chance to finish it out and had to retire.”

Round 7 of the IMSA WeatherTech SportsCar Championship, the Northeast Grand Prix, will be held on July 21 at Lime Rock Park, in Lakeville, Conn.