Video: DTM Hockenheim Duel Between Glock and Paffett by the Numbers

Home » Video: DTM Hockenheim Duel Between Glock and Paffett by the Numbers

A lot of people today complain about the lack of fun watching motorsports. Admittedly, the rules have changed quite a lot from the Golden Era of Touring car racing, straying from the ways of people like Hans Joachim Stuck or, more recently, Johnny Cecotto. However, the DTM teams are trying to bring back some of the fizzle that attracted large crowds to the tracks in the 1980s and 1990s, and it looks like this season is off to a good start.

Two weeks after the spectacular DTM season-opener in Hockenheim, everyone is still talking about the wheel-to-wheel duel between BMW works driver Timo Glock and Mercedes driver Gary Paffett. In Sunday’s race, the two drivers put on a nerve-racking show for several laps and the lead changed hands several times before Glock emerged triumphant in the DEUTSCHE POST BMW M4 DTM and claimed victory in the race. We have turned the emotions of the duel into hard facts and put together a summary of the most interesting figures for you. 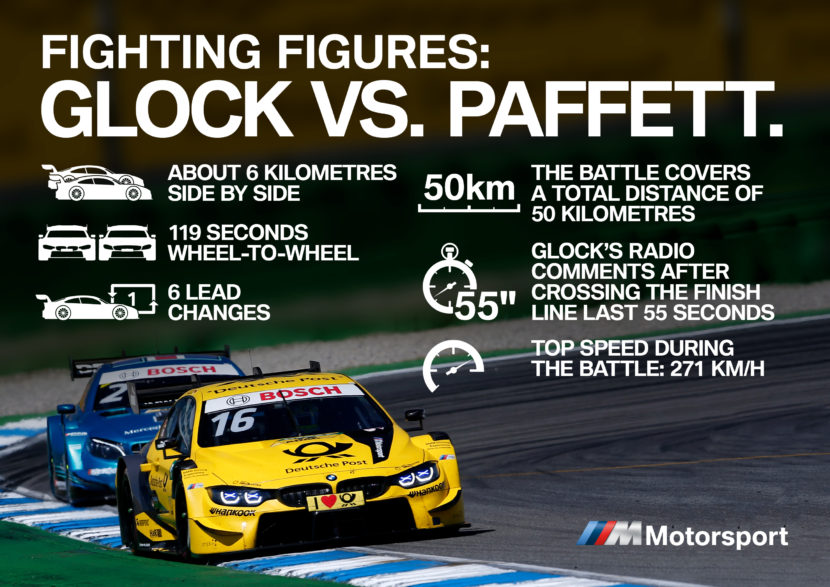 Timo Glock started the race from pole position while Gary Paffett started from tenth place. During lap 19 the two are in adjacent positions for the first time in sixth and respectively seventh. The Mercedes driver takes the lead for the first time on lap 23 and that will change for six times during the duel. Paffett’s lead over Glock reaches 0.767 seconds at one moment but overall, Glock leads the race for 23 laps and Paffett for five laps.

Over the course of the race, the two drivers are wheel-to-wheel for more than 119 seconds at the Hockenheimring, which corresponds to a distance of approximately six kilometers. The duel between Glock and Paffett takes place at top speed: the maximum speed during the battle is 271 km/h. Glock and Paffett’s struggle lasts 11 nerve-racking laps at the Hockenheimring; the battle covers a total distance of 50 kilometers.

The decisive moment of the duel comes five minutes before the end of the race: Paffett has used up his DRS allowance, while Glock can still make use of the DRS six times. Glock crosses the line 3.099 seconds ahead of Paffett, who finishes third. Mike Rockefeller is in second, 2.078 seconds behind Glock. The duel itself, and Glock’s radio comments after crossing the finishing line, have already achieved legendary status: his message to the fans, Paffett, Mercedes and his team lasted 55 seconds.