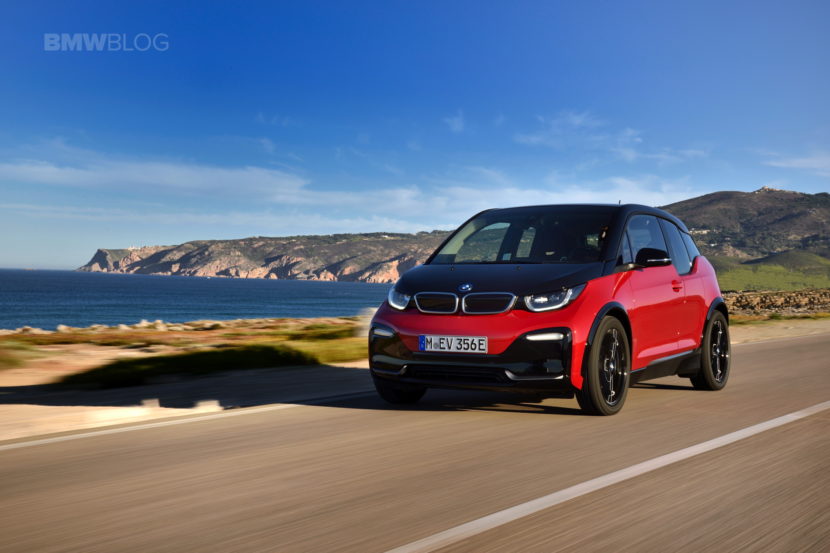 While in Portugal to sample BMW’s fastest car to date – the F90 M5 – the Bavarians have decided to show us another sporty model, this time at the end of the spectrum, in the BMW i family – the i3s.

For the first time ever, BMW is offering a sportier variant of the i3, something fans have been clamoring for since it debuted in 2014. The new BMW i3S aims to bring quite a few fans of the brand over to the electric dark side, thanks to its sportier dynamics and more aggressive looks, a requirement often requested by the small, yet vocal BMW electric community. 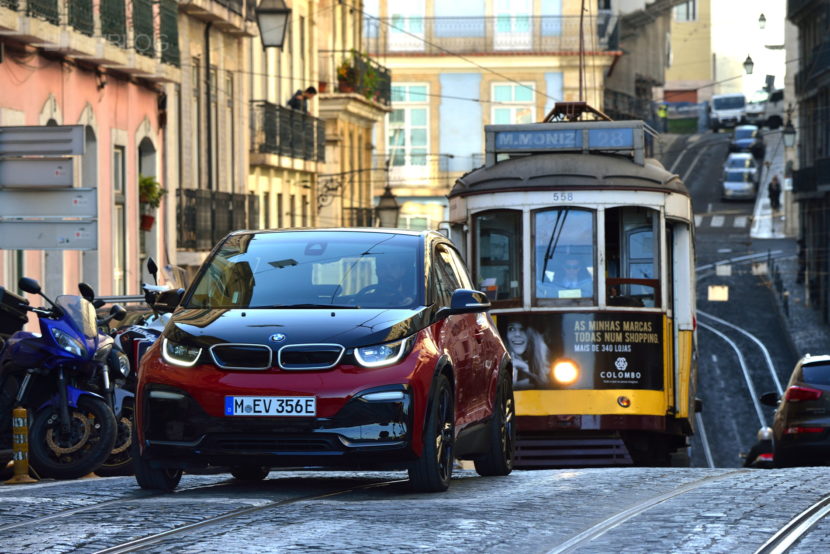 The i3s is still backed by the same 33.2kWh battery found in the “regular” i3.

More significant, though, when it comes to the way the i3s drives, is the fact that it rides 10mm lower than a regular i3, has a 40mm wider track  with wheel arch extensions to accommodate it and rides on larger wheels and tires. There is now 195/55 profile rubber on 20in wheels, rather than 155/70in tires on 19s.

Being a two-times BMW i3 owner, I was excited to head down to Portugal to sample the improved electric hatch. 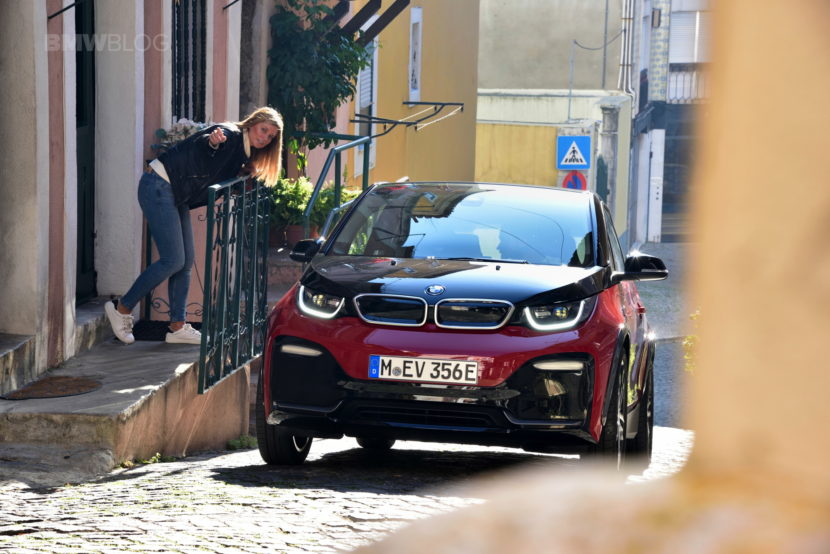 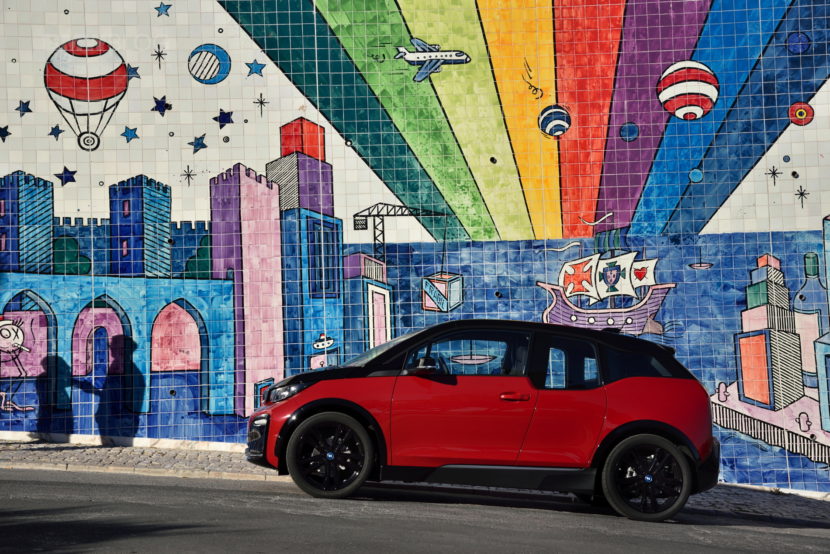 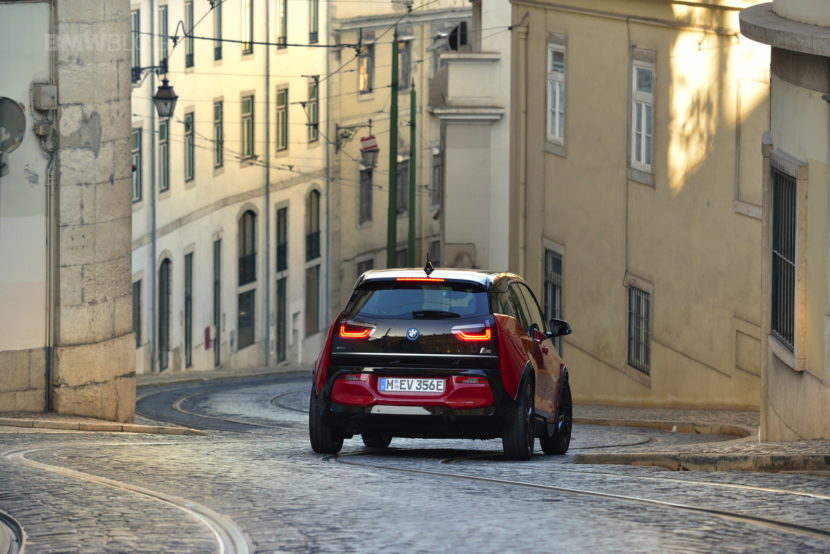 My day in Lisbon kicked off with a pre-defined route through the tight and narrow, yet beautiful Portuguese city streets. As experienced in the always crowded Chicago, this urban environment is where the i3, and now the i3s, shines best. The electric car’s size, agility and immediately available power is what makes the car fun through traffic and busy roads, so the extra oomph in the i3s should only enhance that experience.

Despite a relatively small power increase, the new i3s feels quicker off the start – largely thanks to the additional torque, yet an instrument test would reveal that the power upgrade is best felt from 50 mph and up, and somewhere between 4,000 and 5,000 rpm. What stands out more than the extra horsepower is the more responsive traction control system which handles the power better than in the standard i3. There is now far less power wasted in wheel spin, something I constantly experience with my own i3. 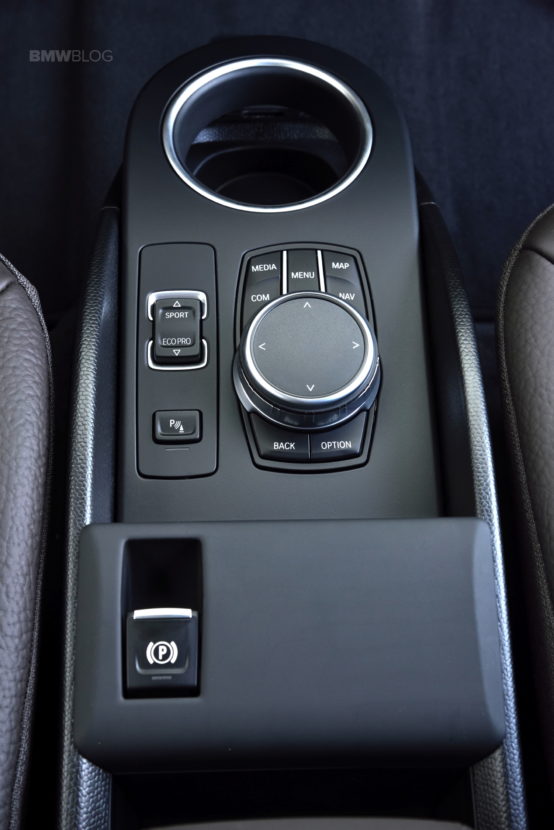 First for a BMW i3 is a new Sport Mode. The new Sport mode on the driving dynamics control switch allows more direct steering and throttle response, so naturally, I immediately switched over to the new driving mode. The i3s now feels more planted, also aided by the wider tires, and eager to sprint through Lisbon. The steering wheel also now carries more weight and has greater response – yet, it’s still quite soft compared to conventionally-powered BMWs. As you could expect, the Sport Model gives the i3 a firmer ride feel, which is something that might please some customers, but appease others.

An hour later we found ourselves taking the Portugal’s perfect highways to some curvy, backroads where we’ve spent most of our time during recent BMW car launches. 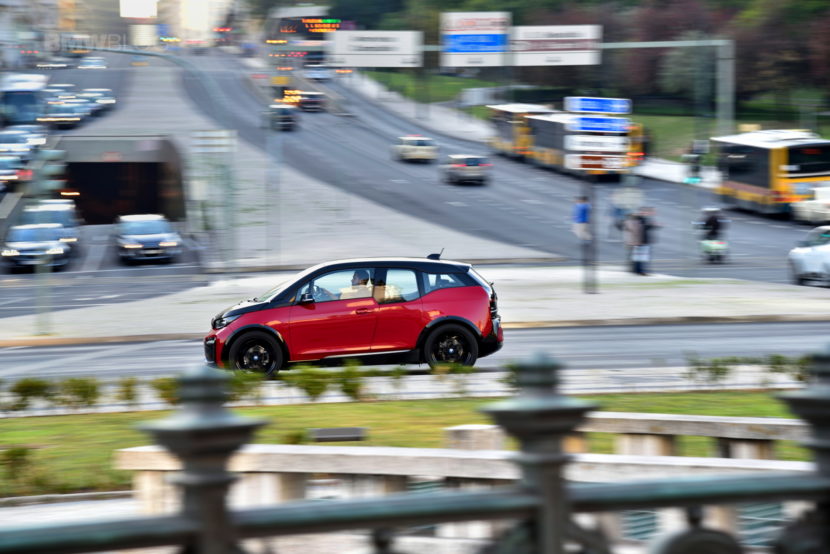 But first, let’s talk about the highway driving. With my current 2017 i3 REx, the experience is still quite bizarre at first – at least for my passengers – when you reach high speeds. The i3 has that wobbly, side-to-side lean when you reach higher speeds and when winds hit you from the side, but the i3s seems to handle that a bit better. The ride is certainly more planted at 70 mph and resists skipping gently across lanes.

Now onto the twisty sections of our itinerary is where the fun begins. The increased grip, recalibrated spring and anti-roll bars inspire more confidence behind the wheel and allows you to push the i3s a bit harder and faster than the i3. There is still a good amount of body lean in corners, but that’s likely not something that most i3 and i3s customers will care about. In the end, remember, this is still mostly a city car. 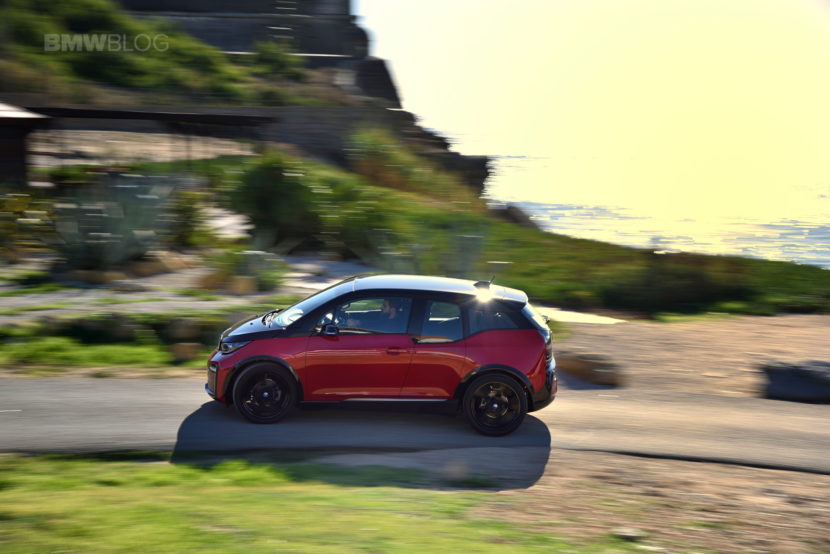 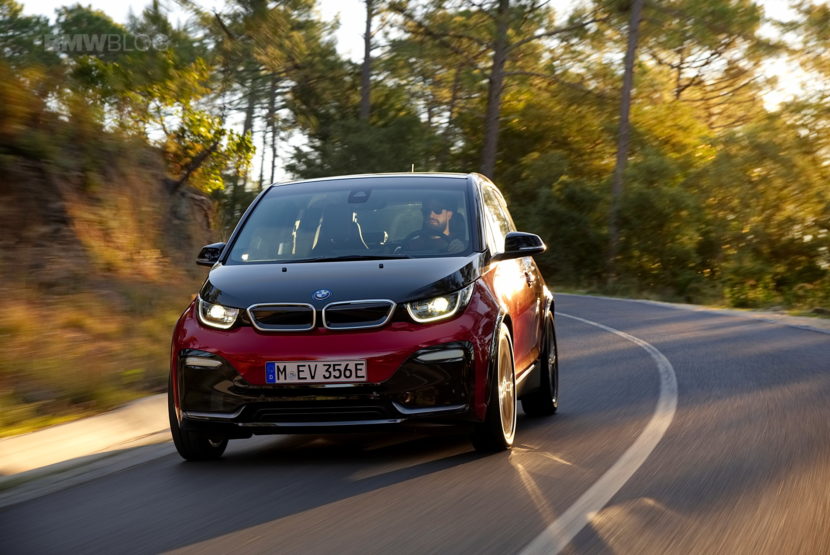 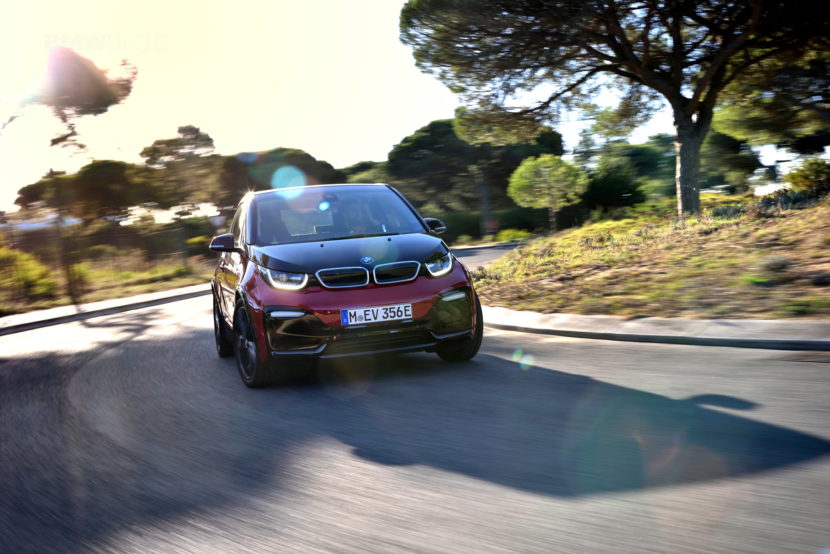 The last segment of our i3s test drive included an autocross at the Estoril race track. Firstly, BMW encouraged me to go alone for a few laps and push the i3s to the extent of my driving abilities. The autocross course included a few sharp hand-right corners – which aim to test its stability and turn-in radius – and an obstacle avoidance exercise through some closely placed together cones.

Not surprisingly, the i3s is quite a contender on a small and technical autocross setup where the instant power delivery and turn-in radius play an important role, but once again, my driving abilities limited the car’s capabilities. So to solve that, I asked BMW Factory and Formula E driver Antonio Felix Da Costa to give me a ride.

Immediately the new i3s felt like a totally different car in the hands of a pro driver – more agile, quicker and …more like a
“BMW feel. ” Once again, the quick autocross test proved that we rarely reach the 50 percent capabilities of our cars.

The US range numbers are not available yet, but the official European test cycle range is quoted at 174 miles for the i3s, 12 miles less than standard i3. In my driving experience, I’ve managed about 120 miles of range, about 5 miles shorter than the official BMW numbers of real-world testing. And of course, at the ideal outside temperature. 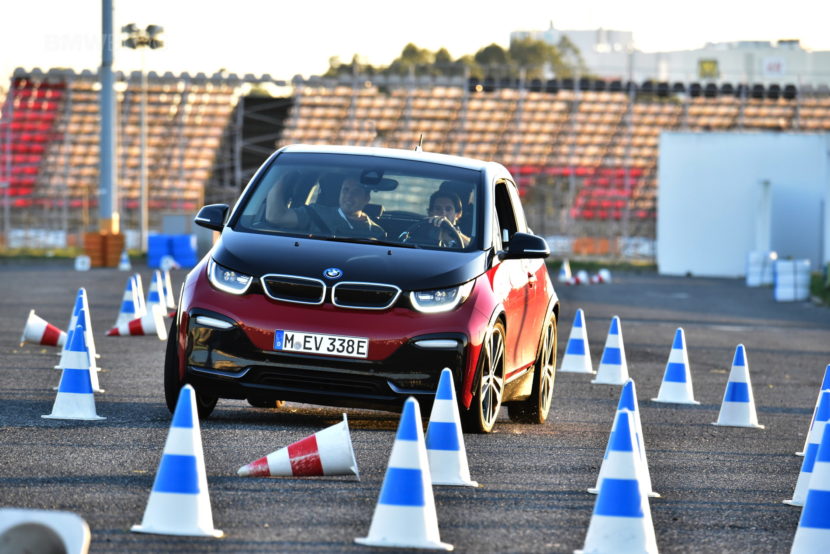 I can certainly say that the i3s is far more fun to drive than the i3 and it opens the door for even sportier electric BMWs in the future. It shows once again that BMW has the capabilities to offer dynamic electric cars, but so far it has taken a cautious approach to that. Hopefully the BMW i Vision Dynamics will be the one to take Bavarian electric family to the next level.

Is it a significant upgrade over the the current i3? Depends how you look at it. If you care about looks and a better driving experience in certain scenarios, sure. But if you’re craving a higher electric range, then the i3s will not offer that, at least in the 2018 Model Year.