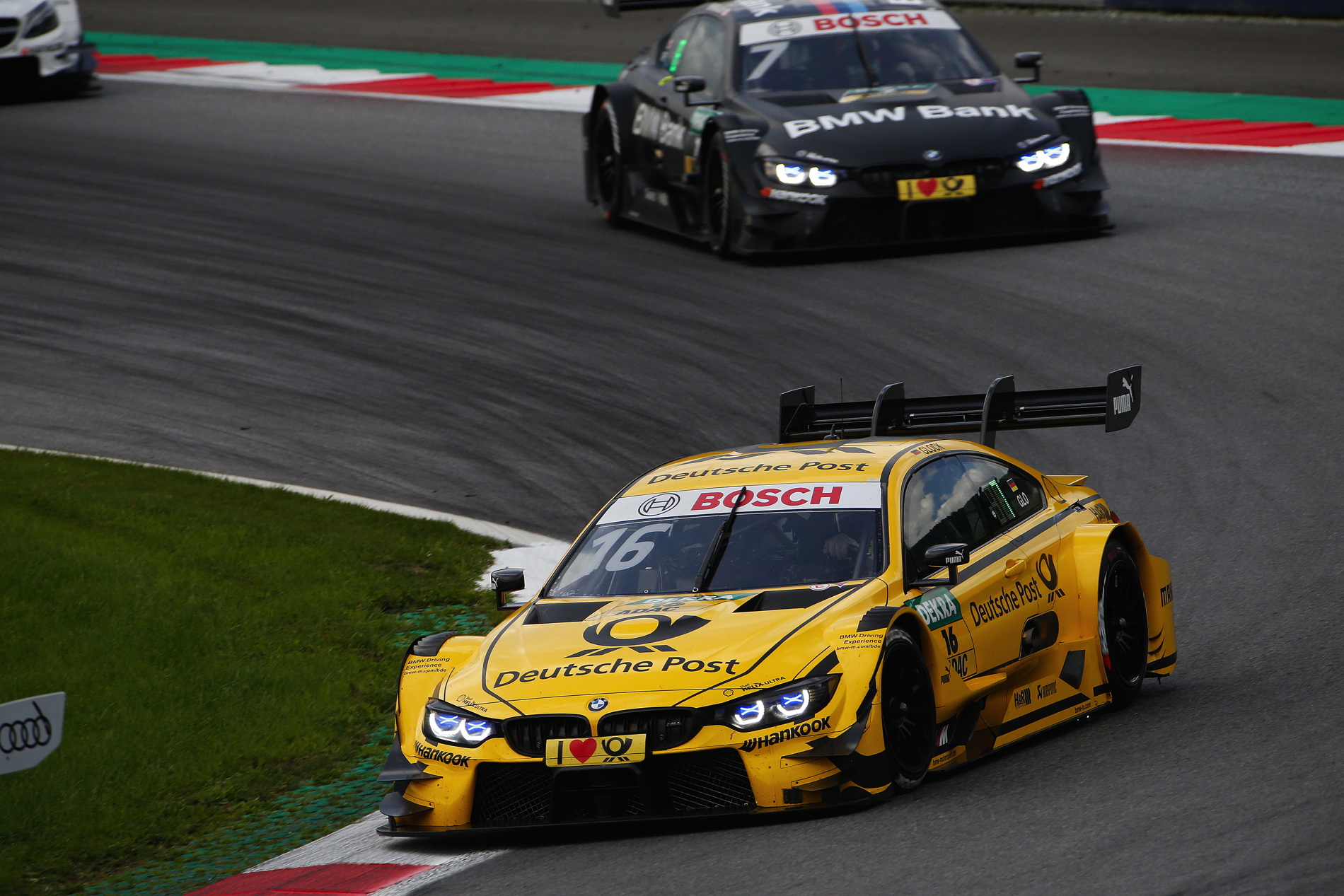 Marco Wittmann (GER) in sixth place and Timo Glock (GER) in seventh were the two best-placed BMW drivers in the Sunday DTM race at the Red Bull Ring in Spielberg (AUT). Maxime Martin (BEL) was on course for a points finish in the 16th race of the year, but fell back to eleventh place in the closing stages. Augusto Farfus (BRA) was 12th, followed by Tom Blomqvist (GBR) in 13th while Bruno Spengler (CAN) came home 16th.

In the Drivers’ Championship, Wittmann is now fifth with 134 points ahead of the finale in Hockenheim (GER). Trailing championship leader Mattias Ekström (SWE, Audi) by 38 points, he still has a mathematical chance of defending his title. Victory on Sunday went to Audi driver René Rast (GER). 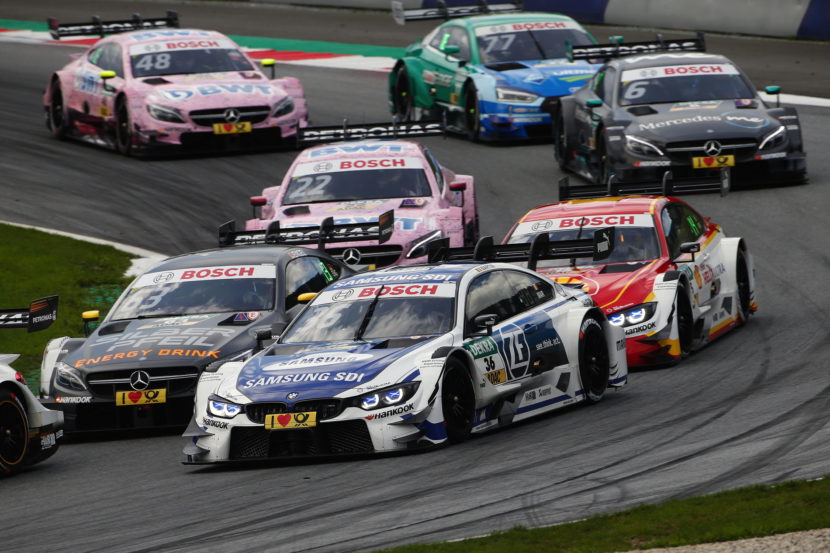 Wittmann defended third place at the start, while Blomqvist climbed to seventh, followed by Glock and Spengler. Farfus (end of lap one) and Blomqvist (after lap three) came in for early stops. Wittmann lost a position on lap nine, but came straight in for his tyre change. As he returned to the track on cold tyres, he was able to fend off Ekström. His next battle then began on lap 21 with Ekström’s fellow Audi driver Nico Müller (SUI), who Wittmann was ultimately unable to keep behind him. Glock was the last BMW driver to come into the pits after 24 laps. The BMW M4 GTS DTM Safety Car made an appearance on lap 29, after Lucas Auer (Mercedes, AUT) hit the crash barriers following contact with Spengler. The BMW driver was given a drive-through penalty for his part in the incident. The ensuing safety car phase saw the field bunch together again. There was some jostling for position at the restart, and Wittmann dropped back a number of positions. The race stewards wasted little time in deciding that Ekström had to allow Wittmann back in front of him, however, as he had forced him too far off the track at the restart. Wittmann eventually crossed the finish line in sixth place after an eventful final few laps, closely followed by Glock in seventh. Martin, Farfus and Blomqvist were eleventh, 12th and 13th, while Spengler finished 16th. 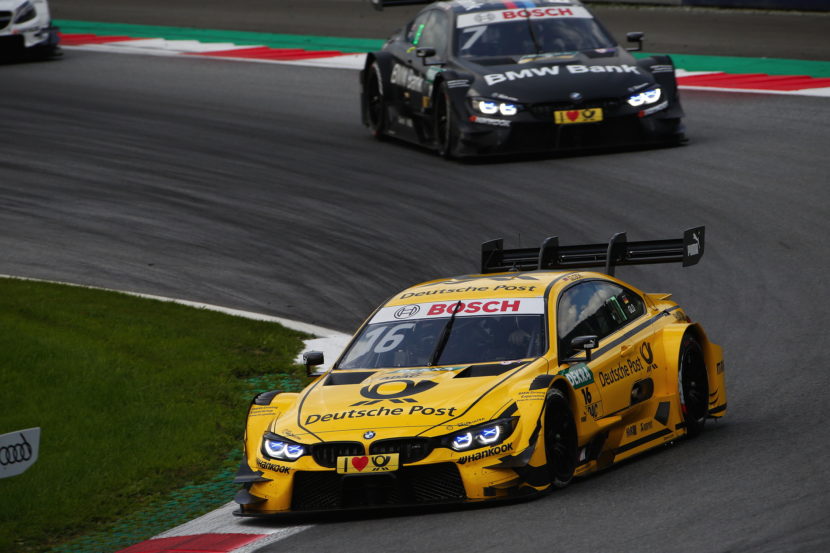 BMW Motorsport Director Jens Marquardt: “On the whole, it was a tough weekend for us in Spielberg. On Saturday, the podium positions were out of reach for us. At least three of our drivers were able to pick up points. Sunday’s race was also hard work for us. Marco Wittmann was blocked several times, and ruined his tyres in the process which meant he had to settle for sixth place in the end. Despite this, a big compliment has to go to Marco, who kept his nerve and came away with eight points. The rest of the guys also fought for every point. On the whole, I cannot understand why the opposition is still playing such unnecessary tactical games, although they clearly are ahead in terms of performance. The situation in the overall standings may look relatively straightforward now, but we are still looking forward to the grand finale in Hockenheim. We will try to end the season with another good result, and to put on a great show for the many BMW fans there.”

Stefan Reinhold (Team Principal, BMW Team RMG): “We were a bit stronger in qualifying today than we were on Saturday. Unfortunately, we were unable to convert our start position into a good race result. Marco lost valuable places at the restart. He was forced off the track, for which there was a penalty. However, once your tyres are dirty, you have a clear disadvantage in terms of performance, which you cannot make up for. The team did the best job possible this weekend.”

Marco Wittmann (#11, Red Bull BMW M4 DTM – Grid position: 3rd place, race result: 6th place – 72 races, 8 wins, 19 podiums, 9 pole positions, 657 points, 2 drivers’ titles): “I am disappointed and angry. Following the changes to the weight situation, Audi now clearly has the car with the best race pace in the field. If you still feel it necessary to block the opposition, then that is not on. I am the kind of racing driver who wants to see hard but fair racing. Unfortunately, that was not the case today.”

Augusto Farfus (#15, Shell BMW M4 DTM – Grid position: 12th place, race result: 12th place – 82 races, 4 wins, 12 podiums, 6 pole positions, 374 points):“Our early stop did not pay off. The tyres degraded too quickly. We stopped again during the safety car phase. That was a clever tactical move, but we were unable to capitalise on it at the restart. We will now concentrate on Hockenheim.”

Timo Glock (#16, DEUTSCHE POST BMW M4 DTM – Grid position: 7th place, race result: 7th place – 72 races, 4 wins, 8 podiums, 3 pole positions, 328 points): “It was generally a difficult race. I put my faith entirely in the team when it came to the strategy, but unfortunately the pit stop was not the smoothest. I then found myself behind Marco after the safety car phase, and eventually came home seventh.”

Bart Mampaey (Team Principal, BMW Team RBM): “That was a disappointing day for us. Maxime Martin struggled with back problems, which meant it was not an easy race for him. Our strategy actually worked really well. Maxime was on course to finish in the points. They were also within reaching distance for Bruno Spengler and Tom Blomqvist. However, the Indycar start was a lottery. The tyres on all our cars collected a lot pick-up and we were unable to defend our positions. We will try to do better at Hockenheim.”

Bruno Spengler (#7, BMW Bank BMW M4 DTM – Grid position: 10th place, race result: 16th place – 155 races, 15 wins, 48 podiums, 18 pole positions, 832 points, 1 drivers’ title): “I had an unfortunate situation in the race. I out-braked Paul di Resta, and Lucas Auer suddenly appeared in the turn at that very moment. I hit the back corner of his car and he spun off. It was unlucky, and I was given a drive-through penalty. A points finish was definitely possible today.”

Tom Blomqvist (#31, BMW Driving Experience M4 DTM – Grid position: 9thplace, race result: 13th place – 52 races, 1 win, 5 podiums, 2 pole positions, 194 points): “I had a good start, but then came into the pits really early. That did not pay dividends. After a certain point in the race, my tyres were finished. I then dropped back through the field like a stone. The restart was okay – but the third and fourth turns were not. The rest of the race and the result were disappointing.”

Maxime Martin (#36, SAMSUNG BMW M4 DTM – Grid position: 11th place, race result: 11th place – 62 races, 3 wins, 10 podiums, 3 pole positions, 341 points): “It was a tough race. I actually looked odds-on to pick up a few points, but I then lost places at the restart. I was forced offline in turn one but never mind, I am still happy. I have struggled with back pains since yesterday, but was able to finish the race. I only just missed out on the points in eleventh place. It was definitely a tough fight.”