The new BMW M5 is getting closer and closer to being delivered to its first customers but, while we’re waiting, some people are still racing the old F10 model against its newer rival from Stuttgart, the Mercedes-AMG E63 S. The results aren’t exactly pleasing for BMW fans, especially if the said races are taking place from a standstill, where traction really becomes an issue.

That’s what Mat Watson noticed first hand when he drag raced two all-wheel drive monsters against an F10 M5. In the video below we get to see the British presenter behind the wheel of a rather rare car, the BMW M5 30 Jahre Edition. With 600 HP under its belt, the 40 Jahre M5 used to be the most powerful car BMW ever made up until the M760Li xDrive model came out. And even though BMW revised the active M rear differential to cope with the extra power, launching this uber-fast sedan is still really tricky. 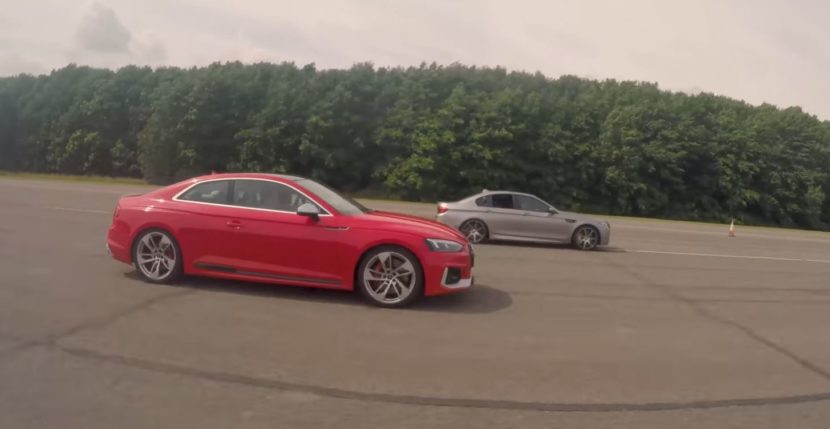 With so much power and torque going to the rear wheels, launching this M5 takes a really careful right foot and it looks like Mat simply doesn’t have one as he ends up nearly lighting up the tires when setting off in this rather unfair drag race. On the other hand, the Audi RS5 and Mercedes-AMG E63 S have no issues whatsoever putting the power down and this whole thing actually becomes a two-horse race.

When the three went at it from a rolling start, the end result was a lot closer to what the numbers say on paper. The E63 S still won since it does come with more power and torque than the F10 M5 30 Jahre but this time around, the Audi came in last since it wasn’t even supposed to be racing these considerably more powerful rivals from Germany in the first place.