BMW DTM one-two-three in the Saturday race at Zandvoort 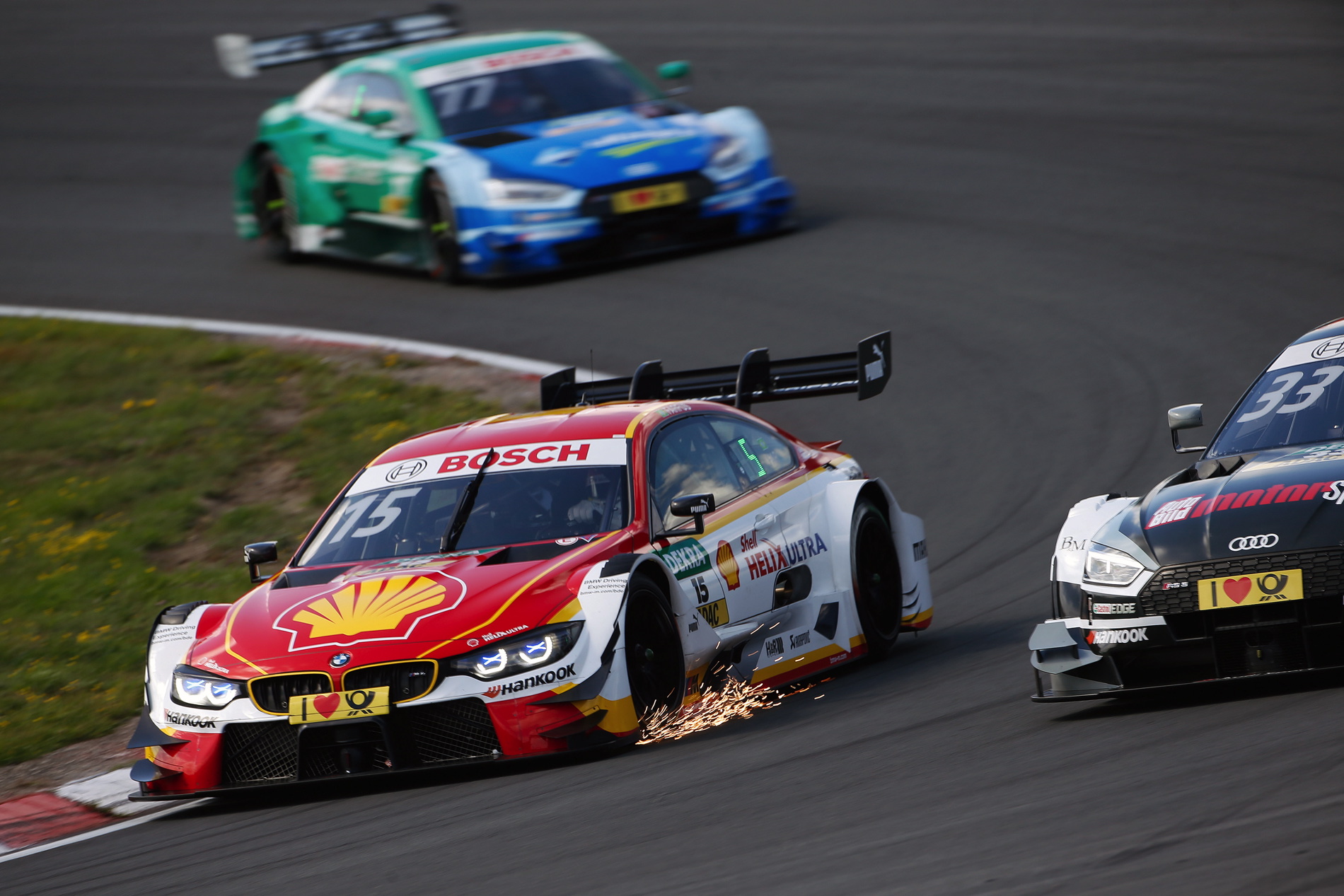 Timo Glock (GER) claimed his fourth DTM victory in race eleven of the 2017 season. Starting from pole position, he crossed the finish line first in the DEUTSCHE POST BMW M4 DTM after 37 laps of racing. He was followed home by fellow BMW drivers Marco Wittmann (GER) and Maxime Martin (BEL), who finished second and third to complete an all-BMW podium. This was the twelfth BMW one-two-three in the history of the DTM. Augusto Farfus (BRA) also finished in the points in sixth place. Bruno Spengler (CAN) ended the 150th DTM race of his career in 14th place, while Tom Blomqvist (GBR) failed to finish. 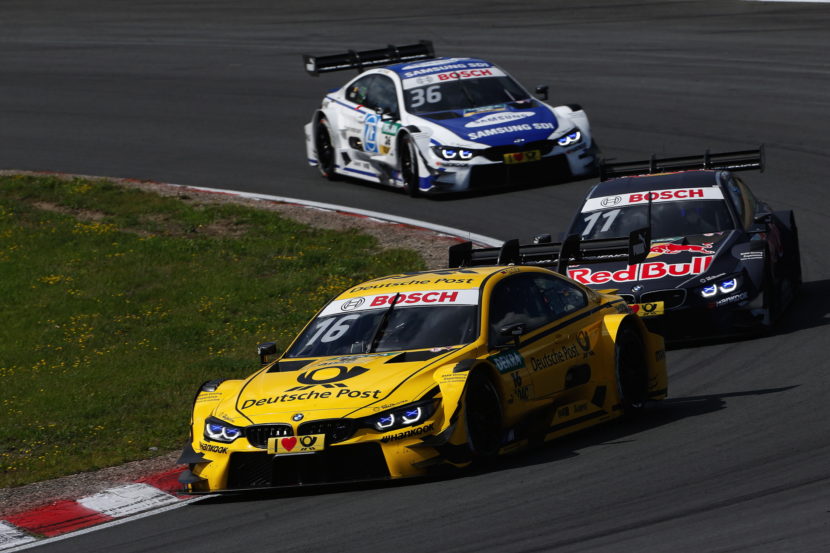 The 20-minute session began in sunshine, and the BMW drivers went well in the first half of qualifying. Timo Glock set the fastest time of 1:27.823 minutes in the DEUTSCHE POST BMW M4 DTM, followed by fellow BMW drivers Augusto Farfus (Shell BMW M4 DTM), Marco Wittmann (Red Bull BMW M4 DTM) and Maxime Martin (SAMSUNG BMW M4 DTM). A shower over the circuit in the dunes shortly after the halfway point of qualifying prevented anyone from improving their lap times, nobody therefore able to deny Glock his third pole position in the DTM. First, second, third and fourth place on the grid represents the best qualifying result for the BMW drivers since the Saturday race at Oschersleben in 2015. Tom Blomqvist also makes it into the top ten, qualifying seventh in the BMW Driving Experience M4 DTM. Bruno Spengler starts his 150th DTM race from 17th place.

Prior to the start of the race, BMW Motorsport Director Jens Marquardt presented Bruno Spengler with a cake to mark his 150th race in the DTM. Spengler ended this milestone race in 14th place after 37 laps. At the front of the field, the action was dominated by the four BMW M4 DTMs that started the race from the front two rows of the grid. Timo Glock led Marco Wittmann and Maxime Martin, who overtook Augusto Farfus in the first few corners. Tom Blomqvist came in for his mandatory pit stop after just one lap. 17 laps later, an issue with his car forced him to retire from the race. Meanwhile, Glock, Wittmann and Martin produced a flawless display to secure the one-two-three for BMW. Martin successfully fended off attacks from Audi drivers Mike Rockenfeller (GER) and Jamie Green (GBR) in the closing stages. Farfus dropped back through the field a little after his pit stop, but still finished sixth to pick up valuable points. 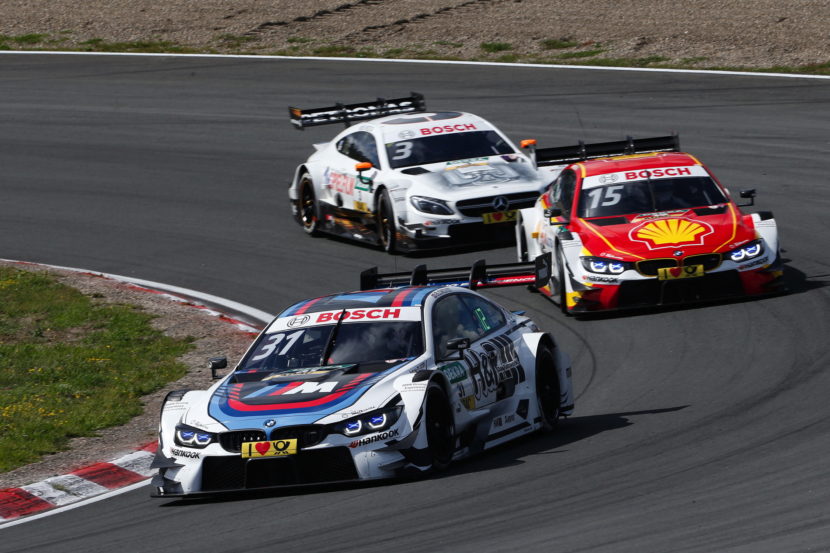 BMW Motorsport Director Jens Marquardt: “It was a great race here in Zandvoort. We had an outstanding qualifying, taking the first four places, although we were obviously a little fortunate with the weather. However, the guys did an absolutely wonderful job of finishing the job in the race, coming home first, second, third and fourth. This is a superb result for us. We did everything right. Tyre management was a real challenge here, and they handled it perfectly. I am delighted for Timo, Marco and Maxime. Augusto also scored more valuable points – absolutely great stuff. Congratulations also to Bruno Spengler on his 150th DTM race. It is a shame that he was unable to make it into the top ten from 17th on the grid.”

Stefan Reinhold (Team Principal, BMW Team RMG): “Today was a superb day for us. Yesterday it was clear that that we had to manage the tyres well today, and we faced an anxious wait until the end of the race to see whether we had done that. They guys did a perfect job and drove superbly. Praise must also go to our engineers, who analysed everything precisely again between yesterday and today, in order to ensure that the performance was spot on. We also witnessed excellent pit stops. As such, I would like to say a huge thank you to the whole team and, of course, BMW.” 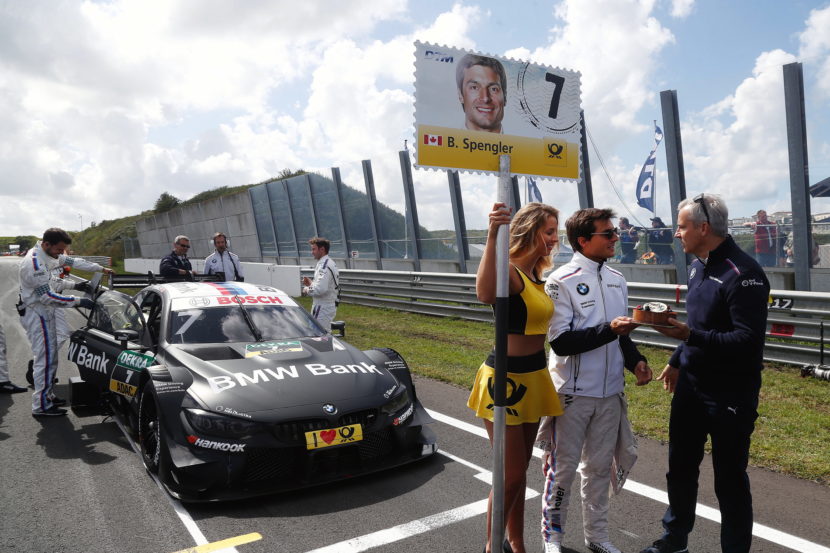 Marco Wittmann (#11, Red Bull BMW M4 DTM – Grid position: 3rd place, race result: 2nd place – 67 races, 8 wins, 18 podiums, 8 pole positions, 614 points, 2 drivers’ titles): “It was a good race for me, with second place and a podium finish. I did not get away perfectly at the start, but then braked late on the outside and was able to take second place. After that, I ultimately spent the race behind Timo. We had very good pace and the car was well balanced. I am obviously happy with the points. Timo did a superb job today, starting with qualifying. This is a great success for BMW.”

Augusto Farfus (#15, Shell BMW M4 DTM – Grid position: 2nd place, race result: 6th place – 77 races, 4 wins, 12 podiums, 5 pole positions, 361 points): “It was a good race, in which we scored a lot of points for BMW. Sixth place is a good start to the weekend for us, but we still have another race tomorrow. The goal is to build on today’s result and do even better tomorrow.”

Timo Glock (#16, DEUTSCHE POST BMW M4 DTM – Grid position: 1st place, race result: 1st place – 67 races, 4 wins, 8 podiums, 3 pole positions, 311 points): “I am obviously very happy with the way the race turned out. I started from pole and, to a certain degree, controlled the race from the front. It may have looked easy, but it was not, as the front-left tyre is put under extreme stress here. The car was very good in the first stint. Strangely, I then had a bit of bouncing on the front axle in the second stint, which resulted in me having a flat spot on the front-right tyre. It was really tough after that. In the end, I finished the job. It is nice for BMW to get a one-two-three. BMW Team RMG had two drivers on the podium. That is fantastic.”

Bart Mampaey (Team Principal, BMW Team RBM): “Congratulations to BMW on a great one-two-three, and to Timo, Marco, Stefan Reinhold and everyone at BMW Team RMG on this result. We had a good race with Maxime. It was not easy, as we were the last BMW in the leading group. Maxime tried to stay in the DRS window behind Marco, whilst at the same time defending against the cars behind him as well as possible. He did that superbly, although it was rather close at times, and fully deserves his place on the podium.”

Tom Blomqvist (#31, BMW Driving Experience M4 DTM – Grid position: 7thplace, race result: DNF – 47 races, 1 win, 5 podiums, 2 pole positions, 193 points): “I don’t know exactly what was going on. My start was very good, and I then came in early for my stop. Then the tyre suddenly degraded dramatically. After that, I had a really strange feeling in the final corner. I had massive understeer and no longer really had a feel for the car. It was simply dangerous to continue. We must analyse it and find out what was wrong before tomorrow.”

Maxime Martin (#36, SAMSUNG BMW M4 DTM – Grid position: 4th place, race result: 3rd place – 57 races, 3 wins, 10 podiums, 3 pole positions, 324 points): “I had a good start and was able to overtake Augusto. After that, we settled into a good rhythm. The Audis were really strong towards the end of the race, and I had to push really hard to hold them off. I am very happy and pleased for BMW. I scored some important points today, and we will now look to continue in the same vein.” 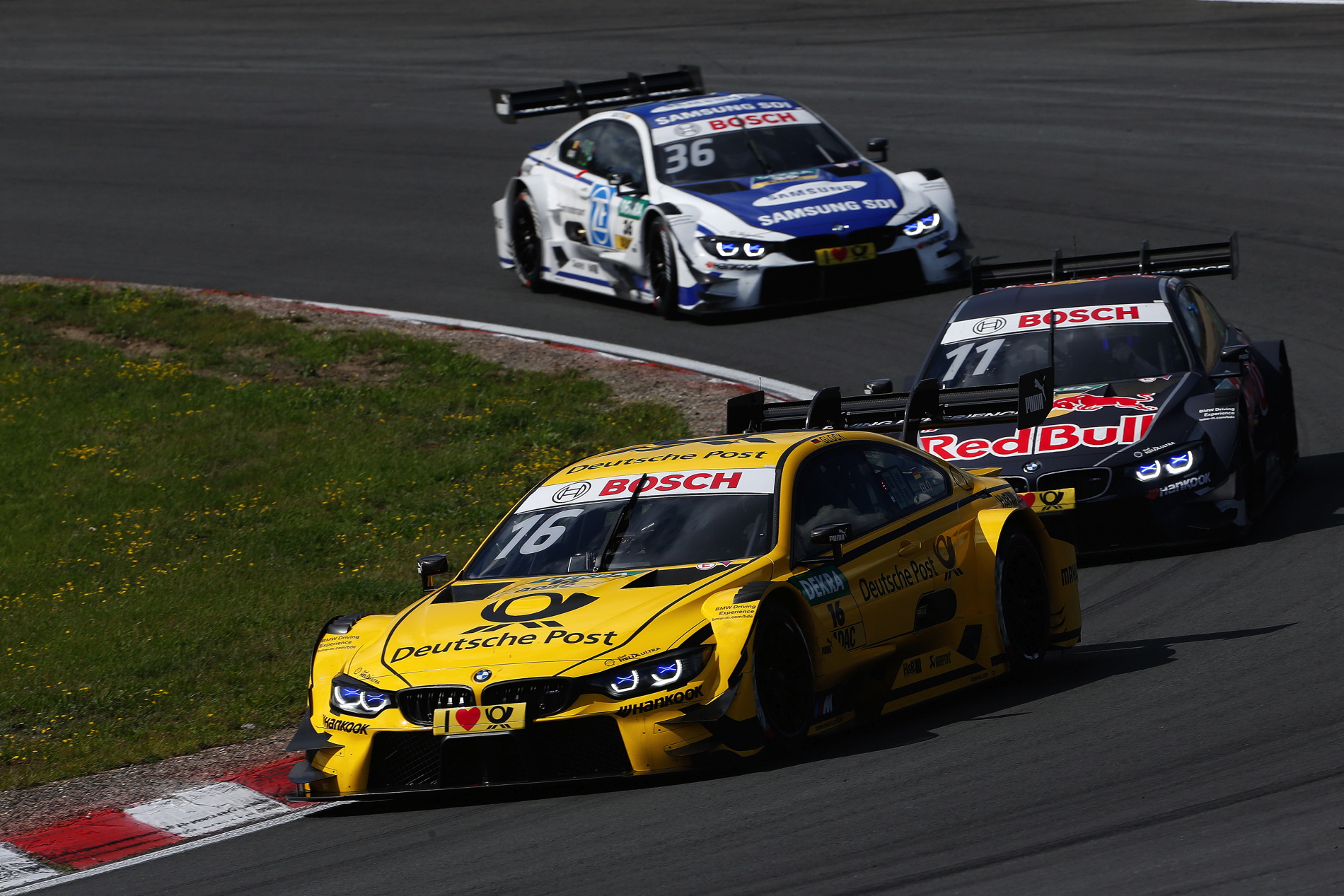 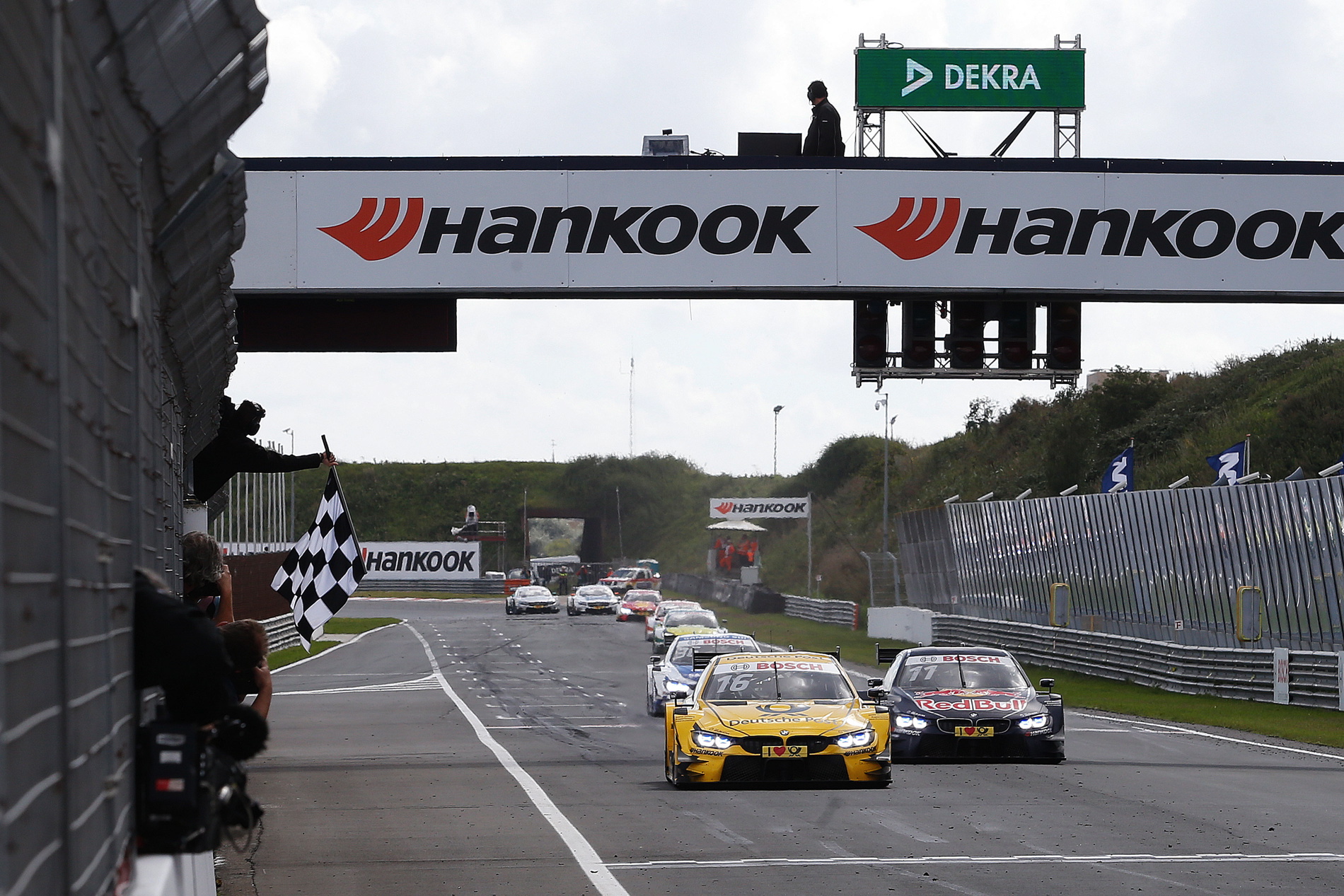 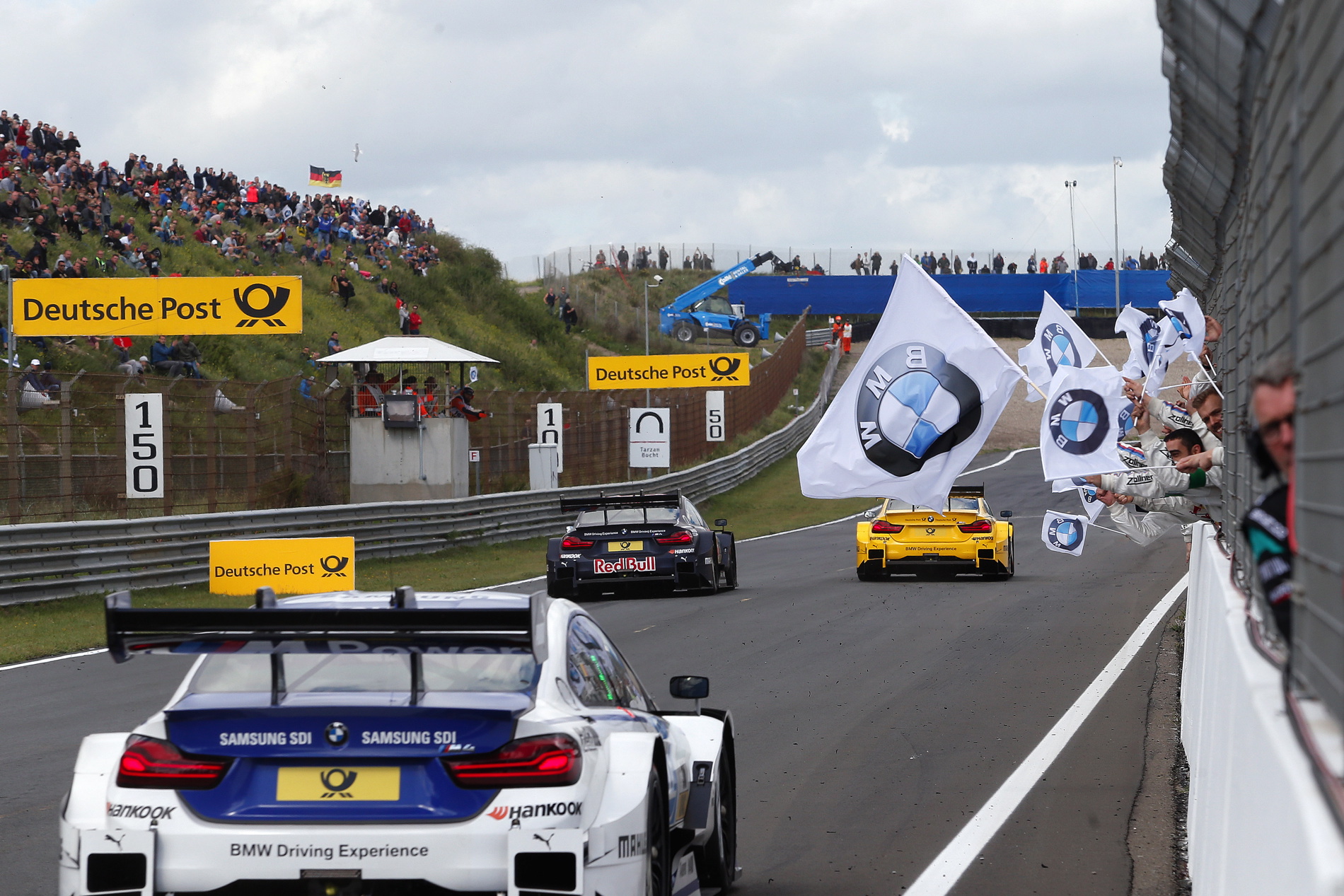 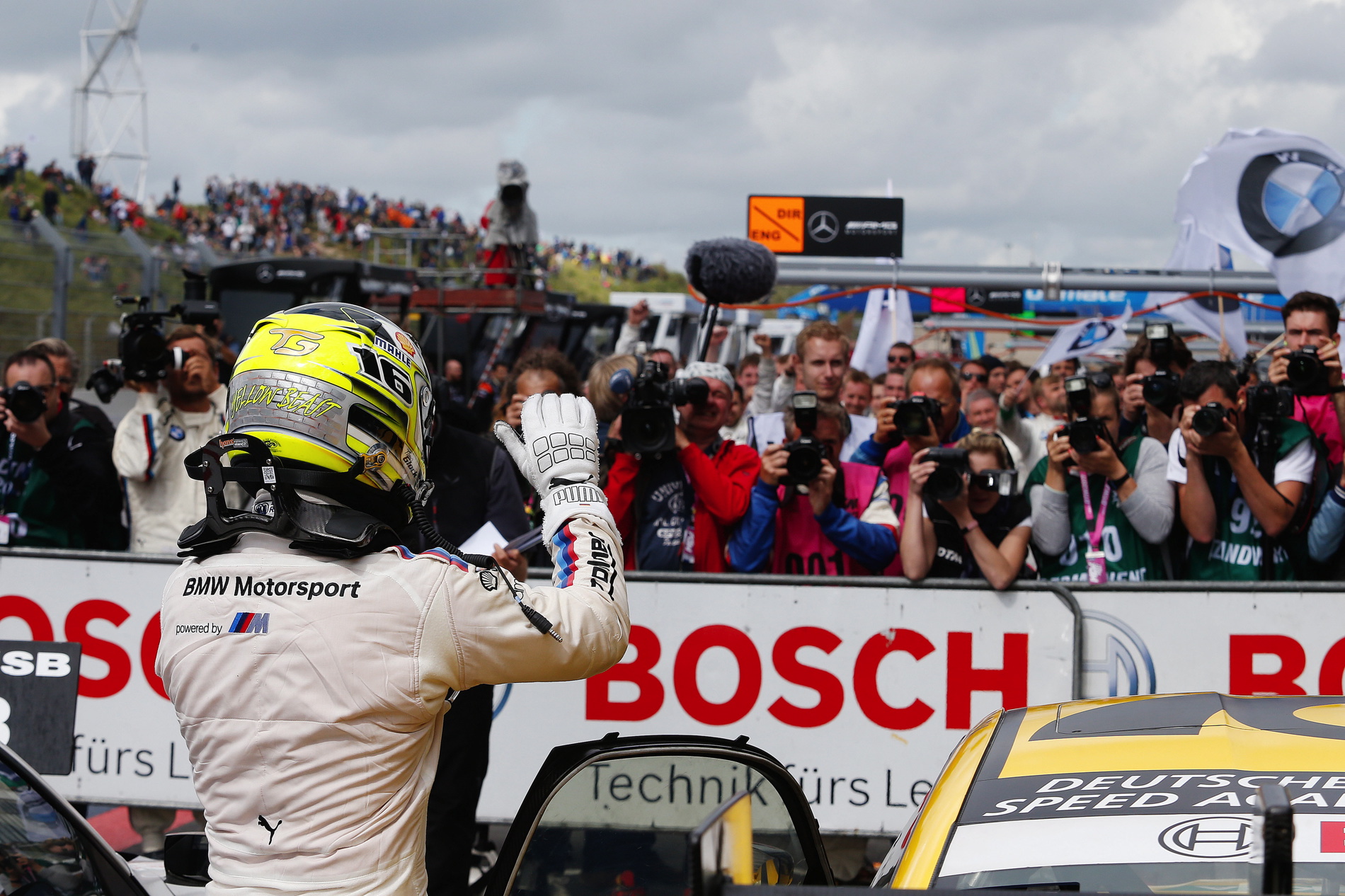 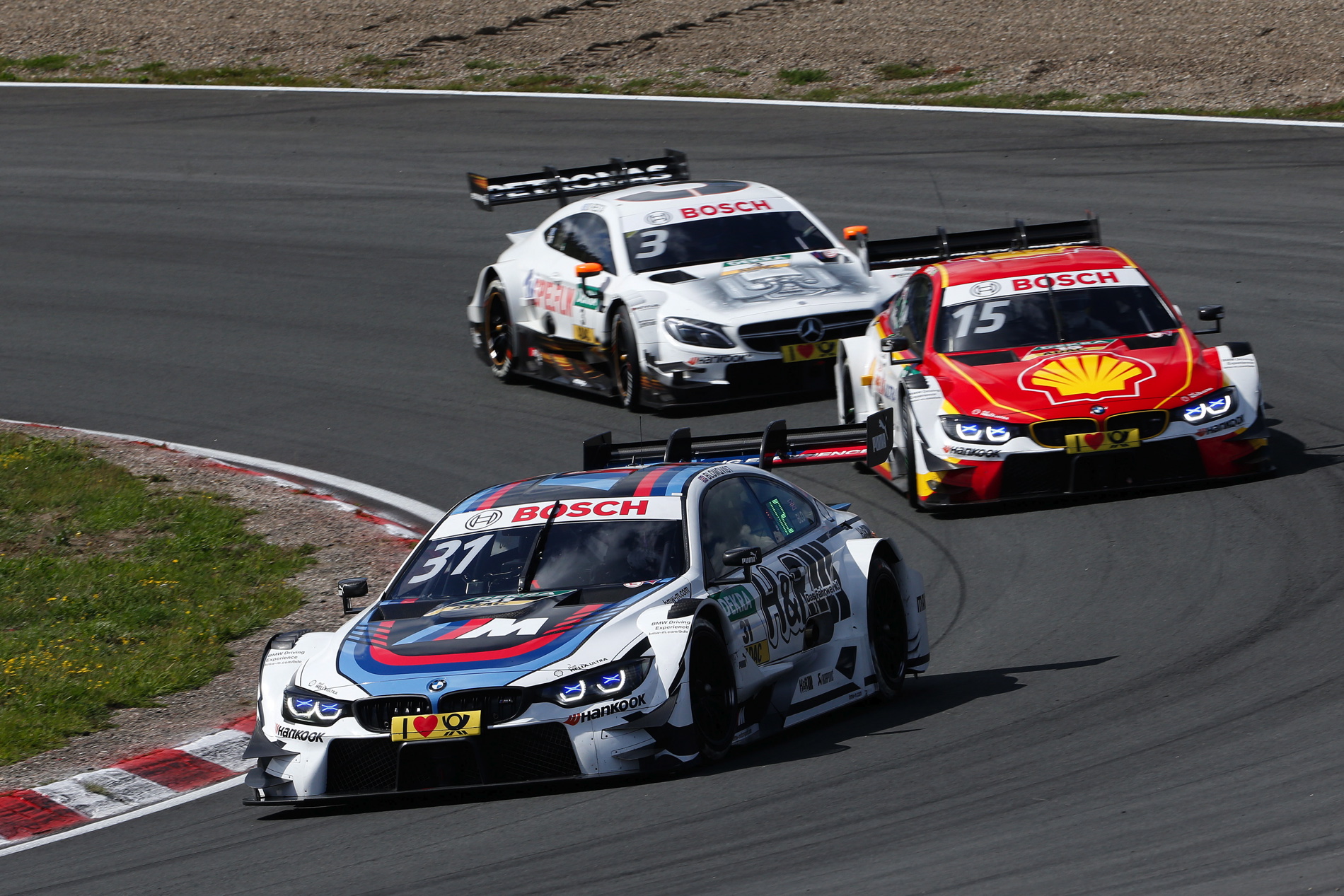 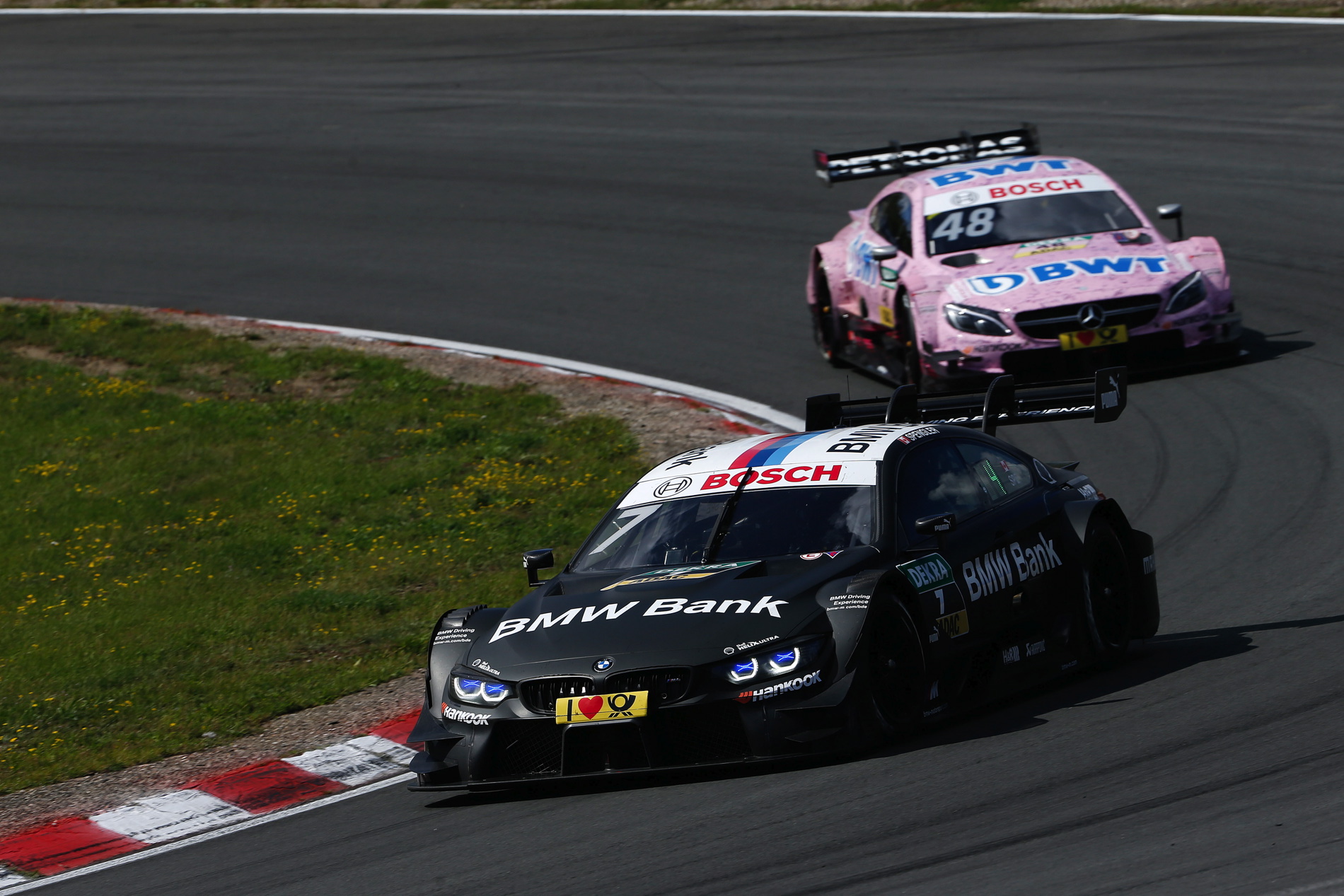 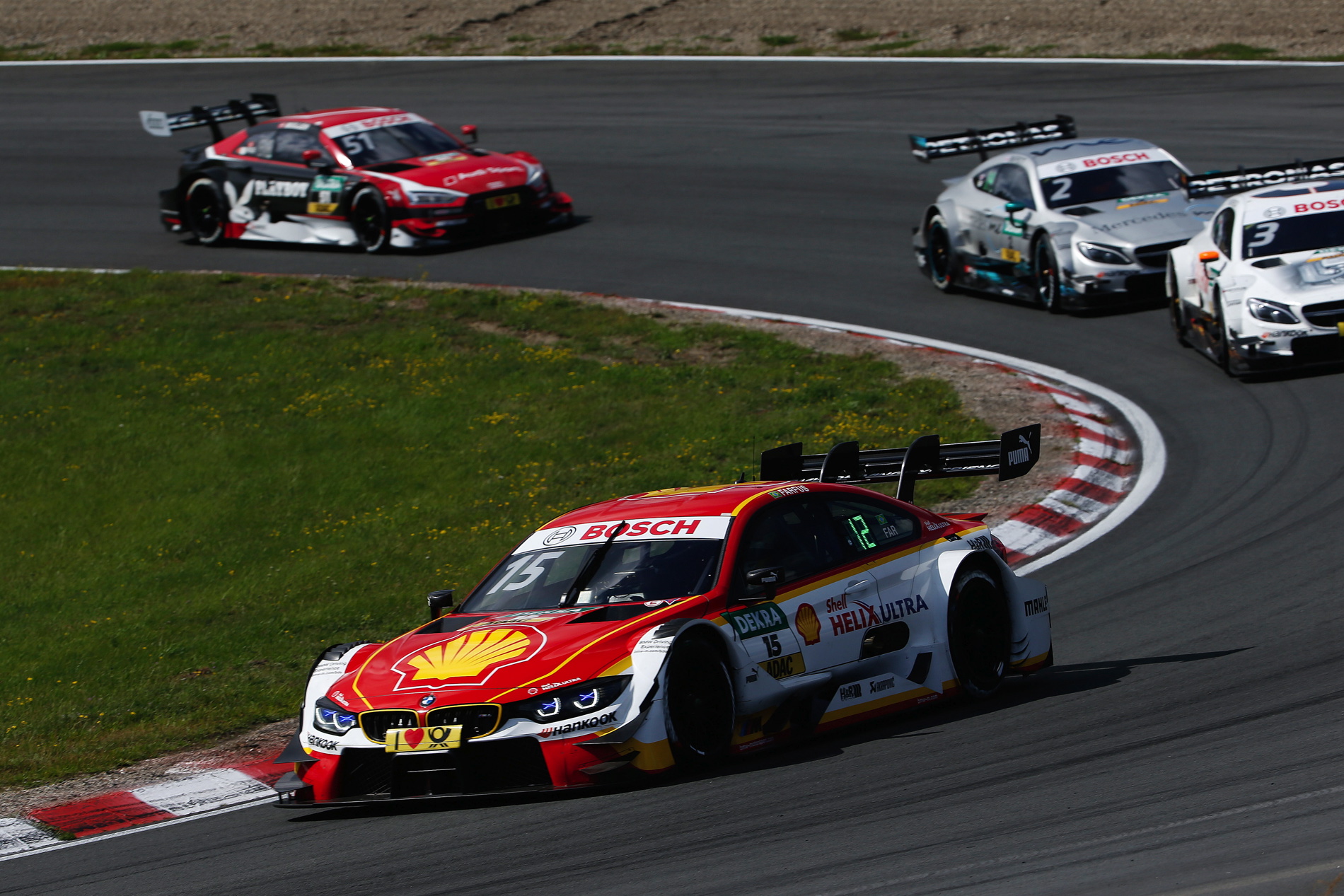