If you aren’t familiar with the HGK BMW F22 Eurofighter, it’s one of the most extreme custom 2 Series builds ever made. It started out life as a standard BMW 2 Series but was then completely stripped apart by Latvian tuner HGK. The body was stripped down and had its body panels replaced with a Kevlar “Eurofighter” body kit. The entire interior was also stripped out, as was the engine, gearbox and suspension. The result of all this is a tire-scorching monster that looks as scary to drive as it is to look at.

Rather than a BMW engine under the hood, the HGK BMW F22 Eurofighter uses a modified Chevy small-block V8 developed by Mass Motorsports. While this will upset BMW purists, there’s good reason for the swap. The Eurofighter has been built to win drift competitions, so it needs a proper drifting engine, meaning something that can roast its rear tires at the slightest push of the throttle and continue doing so over and over again without fear of reliability. So it makes 820 hp at 7,000 rpm and 678 lb-ft of peak torque, with 590 lb-ft available under 4,000 rpm. All of that fury is sent to a Samsonas five-speed sequential manual gearbox and Winters quick-change differential. 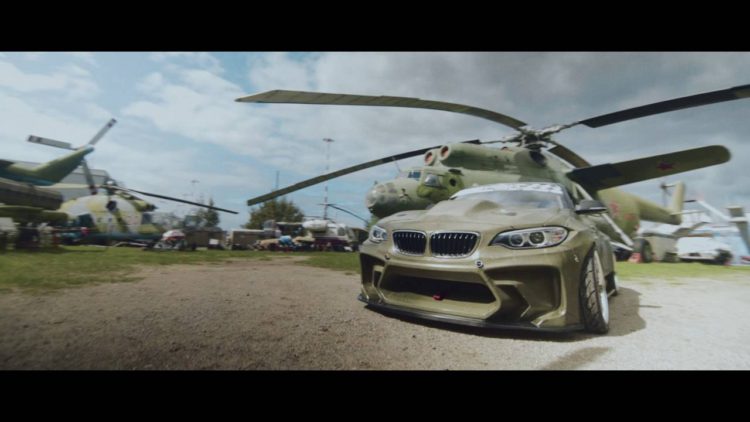 To make sure the F22 Eurofighter is as planted and nimble as possible, it was fitted with custom three-way adjustable Nitron coilovers with CNC-machined camber-adjustable strut mounts. Hauling of that power down are Wilwood brakes, with six-piston calipers up front and four-pistons at the back. So it has serious stopping power as well.

Though, it’s not like there’s a lot of weight to haul down, as all of its Kevlar and carbon fiber body work and weight-savings allow the F22 Eurofighter to weigh only 2,645 lbs. That’s lighter than a BMW i3 and it has more power than a McLaren 720S. All in a chassis as small and as nimble as the 2 Series’, with a short wheelbase and almost no overhands. If that isn’t a recipe for insane drifting fun, I’m not sure what is.

In this video, we see the Eurofighter drift through some twisty corners from a camera car and it’s beautifully shot, getting us close to the action but in a really cinematic way. The tires smoke like crazy, it makes insane noises and even gets up on the grass toward the end. It’s an awesome video, check it out.