Typically, you wouldn’t buy a BMW M240i, or any BMW M Performance model, for its efficiency. In fact, doing so is counterproductive, as the M240i isn’t actually good on gas. However, that doesn’t mean BMW hasn’t added some go-green tech to the little 2er. BMW’s Eco Pro mode does an admirable job of eking out as many miles as it can on as little fuel as possible. While it doesn’t turn the M240i into a frugal hybrid, it certainly helps for when its owner isn’t trying to drive spiritedly.

In this recent review from Autoblog, we take a look at the M240i’s go-green attitude, which is something far different from any other review of the car. Most people want to just talk about its performance, its handling and its looks. To be fair, how can you not? Its brilliant B58 turbocharged 3.0 liter I6 engine makes 335 hp and 369 lb-ft of torque. When paired with an eight-speed automatic, it can get from 0-60 mph in 4.3 seconds and on to a top speed of 155 mph (electronically-limited). But its speed and performance aren’t the only aspects of the M240i, as it’s a more well-rounded car than that.

When put into Eco Pro mode, it actually becomes a very good traffic and city car. Eco Pro dulls the throttle response, allowing the throttle to be more easily applied without using a ton of fuel. It also re-calibrates the gearbox’s shift patter, allowing it to shift up to the highest gear possible, giving it the best economy. It will also uses its Auto Stop/Start function at red lights and in traffic, shutting the engine down while stopped and automatically starting it back up again once you lift off the brake. Now, none of this stuff is new, as BMW and several other automakers have been using these techniques for a long time. However, it’s BMW’s software that makes the M240i’s Eco Pro mode special. 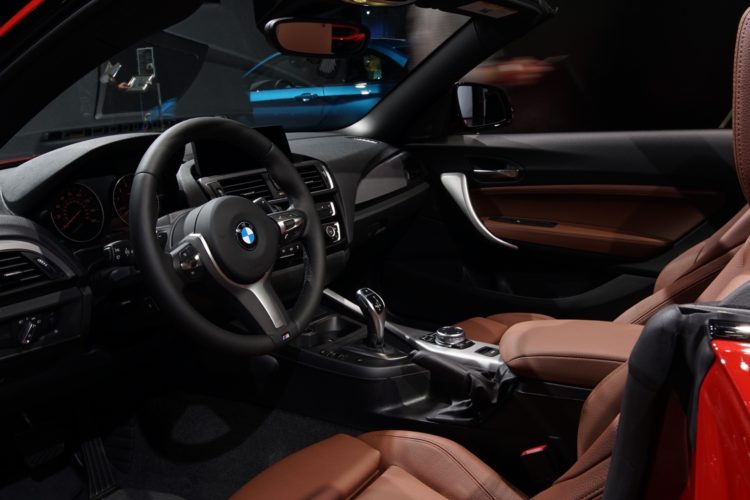 If Eco Pro is selected, the digital gauge that sits underneath the tachometer becomes a “Power/Charge” meter that tells the driver just how much the engine power and how much regenerative charging they’re using. It’s quite helpful in helping the driver understand how to drive more efficiently and gauge their driving in real-time. If you’re using this and driving inefficiently, the slider turns grey, but if you start driving with better efficiency, it will turn blue. There’s also the “Coasting” feature, which will decouple the engine and transmission during coasting, so as to reduce the amount of powertrain loss on the engine and help sip fuel. While in Eco Pro mode, the M240i will also manage its air-con and heat so as to keep the cabin comfortable while using as little energy as possible. Apparently, the car is very good at managing this without disturbing interior comfort.

The BMW M240i is not an economy car. It’s a sports car with a turbocharged I6 engine, rear-wheel drive and great performance. It’s also not cheap, so fuel economy really isn’t its main priority. But it’s nice to know that BMW gives it these features for people who also enjoy frugality when warranted. For instance, let’s say you’re bombing down a twisty back road and having some great fun, keep it in Sport mode and drive it as hard as possible. But what happens when the back road ends and the traffic-packed highway starts, you can put the M240i in Eco Pro mode and sip fuel while you’re not moving much. BMW could have easily just made the Eco Pro mode a half-assed mode that uses Auto Stop/Start but instead it made it a fully developed and very useful feature that makes the M240i a more well-rounded car.