Alpina B7 vs Audi S8 Plus vs Jaguar XJR

Home » Alpina B7 vs Audi S8 Plus vs Jaguar XJR

While the Audi S8 Plus might have the horsepower numbers to compete with every other luxury super sedan on the market, it’s also quite old and lacking the sort of performance tech that its newer rivals have. However, it isn’t alone in that regard, as the Jaguar XJR is a fellow old man in the segment, making do with whatever old kit it has. Both cars seem to be hopefully outmatched when compared to the brand-new BMW Alpina B7.

So Automobile Magazine put all three against each other to see which was best.

For those of you who don’t know, Alpina is a German BMW tuning company that works directly with the famed Bavarian brand. The Alpina B7 is actually built alongside the 7 Series and sold by BMW. But it is no ordinary 7 Series. Its 4.4 liter twin-turbo V8, borrowed from the BMW 750i, features new turbochargers, a new exhaust and some Alpina-specific tuning, among other things, to develop 600 hp and 590 lb-ft of torque. That power is sent through an eight-speed automatic gearbox to all four wheels, getting the Alpina from 0-60 mph in just 3.6 seconds. It even features four-wheel steering and a system that monitors the road ahead to pre-adjust the Alpina-tuned dampers for both better cornering and comfort. Impressive stuff. 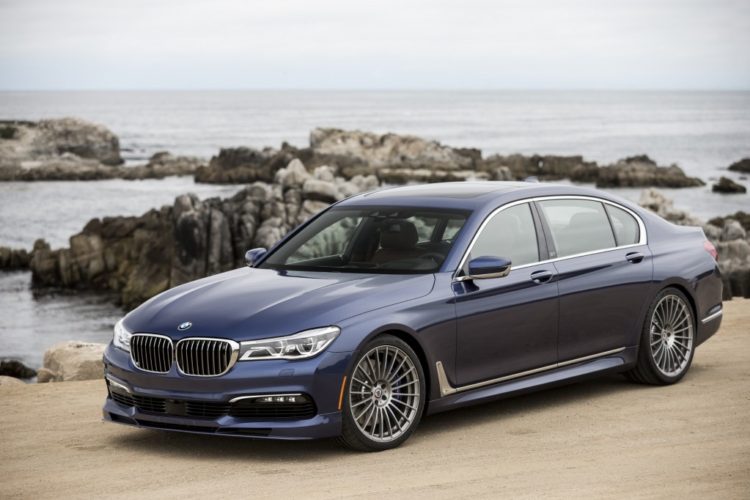 Compared to that techno-powerhouse, the Audi S8 Plus is really rather simple. But that doesn’t make it bad. Its 4.0 liter twin-turbo V8 makes 605 hp and 517 lb-ft of torque, making it a good match for the Alpina. That power is sent through the very same ZF-sourced eight-speed auto as the Bimmer and also powers all four wheels, via Quattro. Audi’s S8 Plus is only capable of 0-60 mph in 3.7 seconds, a tenth slower than the Alpina. What a travesty for S8 Plus owners. There’s no doubt the Audi S8 Plus is a spectacular performer, but it lacks a bit in terms of luxury and performance technology. Its interior is wonderfully well made, but its cabin tech is far behind the BMW’s.

But the real old man in the group seems to be the Jaguar XJR. Despite its stunning good looks, easily the best looking car in the test, it just can’t keep up with the other two. Even though it’s packing the largest engine here, a 5.0 liter supercharged V8, the Jag only makes 550 hp and 502 lb-ft of torque. It’s only in this company that those figures seem inadequate. However, it does make the Jag lag behind, doing 0-60 mph in 4.4 seconds. Again, that’s still blisteringly quick, but just not enough in comparison to these other two cars. And it’s also lacking the sort of technology that the other two cars have. The BMW has both incredible cabin tech as well as performance tech. The Audi’s cabin tech is not as good as the BMW’s but still great. The Jag, on the other hand, is seriously lacking in both.

In terms of handling and dynamics, this trio is a bit of a mixed bag. The Jaguar has the best steering and is the most fun to toss around, though its ride is a bit too stiff and gets upset too easily. The Audi steers well, though its steering can be overly light and vague, and it’s incredibly capable. Though, the Audi’s ride can be a bit too floaty over choppy pavement. The BMW seemed to be the best car in the test, despite not being perfect. Its steering wasn’t as good as the Jag’s but was said to be better than the Audi’s. Its ride was still 7 Series comfy, though, and it was better than the Audi at hustling down a road.

Overall, Automobile gave the win to the BMW Alpina B7, second place to the Jaguar XJR and third to the Audi S8 Plus. The BMW was the best blend of all things and had the best technology and luxury by far, which was expected considering it was the newest by far. The Jaguar XJR, despite its faults, was the most fun to drive and the best looking, so its charm went a long way. While the Audi S8 Plus is still dynamically impressive, it’s getting too old in every other respect and a new one is in desperate need.