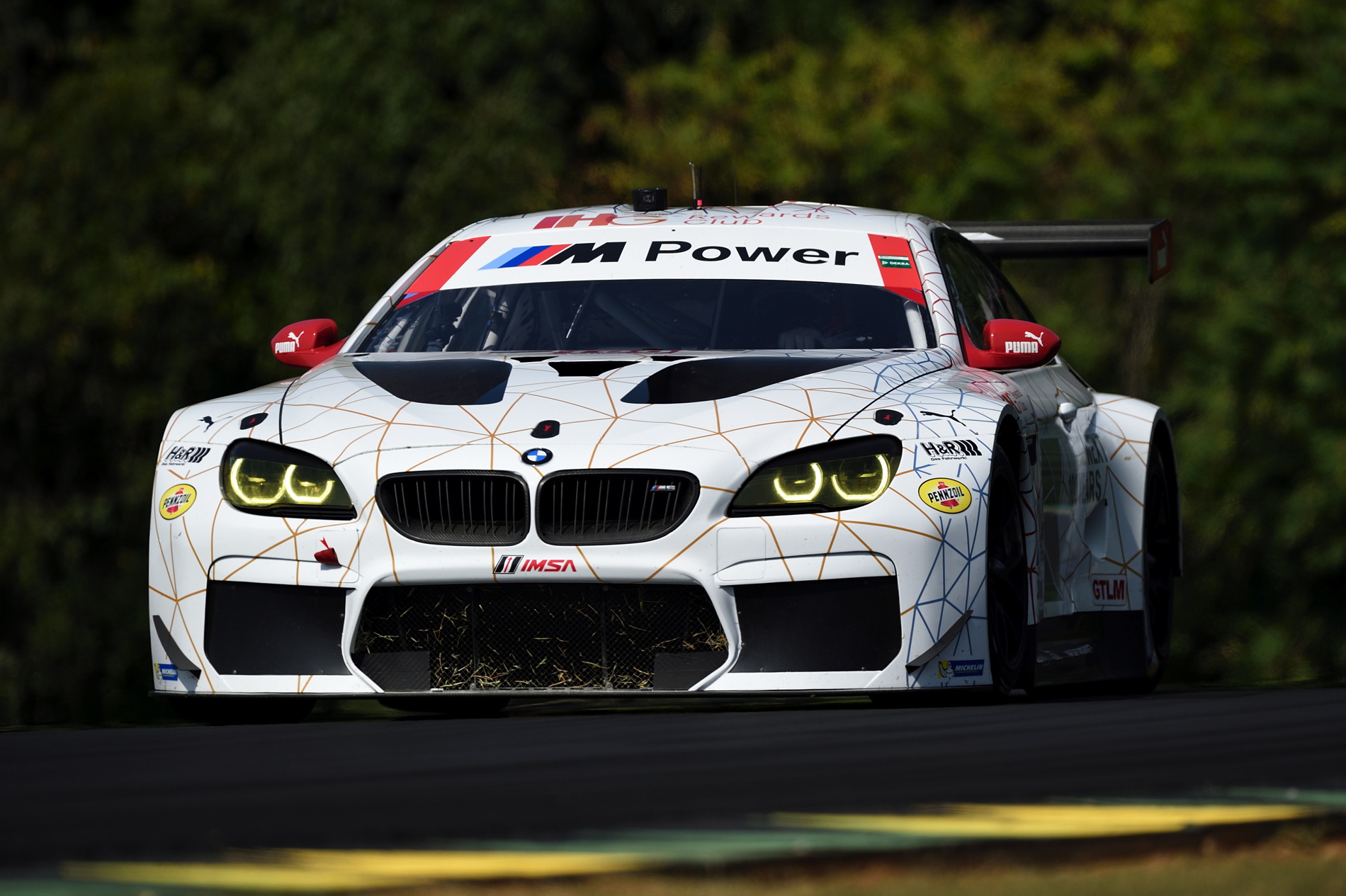 In the IMSA WeatherTech SportsCar Championship Michelin GT Challenge at VIR, the two BMW Team RLL BMW M6 GTLMs finished fifth and eighth in the race that was only for GT cars. It was the No. 25 BMW M6 GTLM of Bill Auberlen and Dirk Werner that finished ahead of the No. 100 sister car of John Edwards and Lucas Luhr. The leading cars completed 90 laps of the 3.27-mile, 18-turn VIRginia International Raceway in the two-hour-and-forty-minute race that had just one full course yellow six minutes from the checkered flag. The GTLM class win went to the No. 3 Corvette. 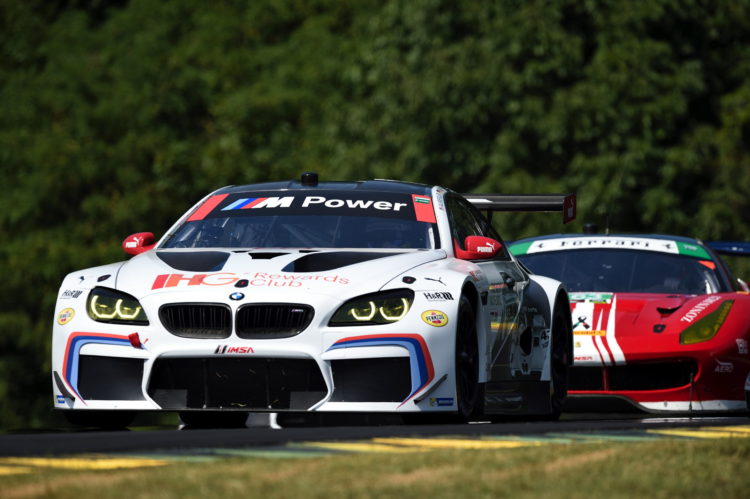 From fifth and sixth on the grid, after a clean start, it was Werner who had the best getaway and at the end of lap one had moved ahead of Edwards. Then on lap two the No. 100 slipped to seventh and remained in this position until, at the end of lap 13 after 22 minutes of running, it lost its right rear wheel. Edwards managed to get back to the pits for four new tires and fuel, but then received a drive through for a pit stop penalty, which he took at the end of lap 15, and this dropped him back to 18th overall and ninth in class. It also forced a change of strategy from two to three stops. By then the No. 25 car, which was a lap ahead, had moved up to third, 3.8 secs off the lead. 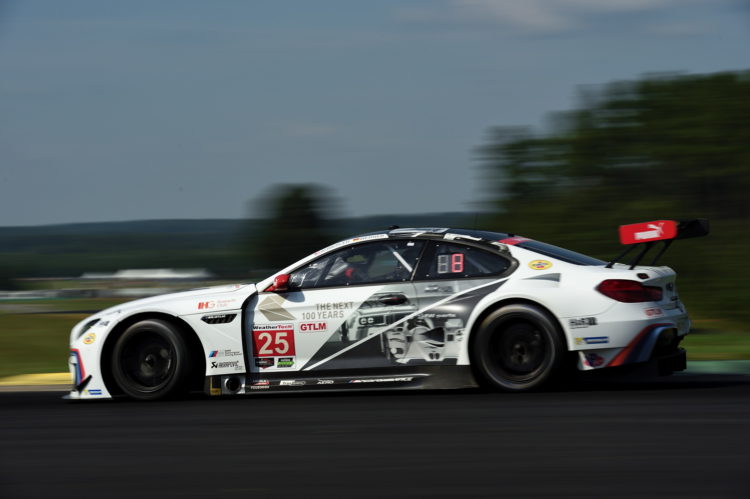 At the 40-minute mark and after 23 laps, Werner was still third and Edwards was fighting his way through the GTD field from last in the GTLM class. On lap 25 Werner had a short excursion off the track and dropped down to seventh and 15 secs off the lead. At the end of lap 30 Werner pitted and Auberlen took over after the car was refueled and fitted with new tires. Following the first round of pits stops for the GTLM class, and at the end of lap 33 and the first hour of running, Auberlen was seventh and Edwards ninth in class and back on the same lap as the leaders. Edwards pitted for new tires and fuel on lap 41 and Luhr took over at the wheel of the No. 100 car. Auberlen was running eighth at the halfway mark with 44 laps completed. 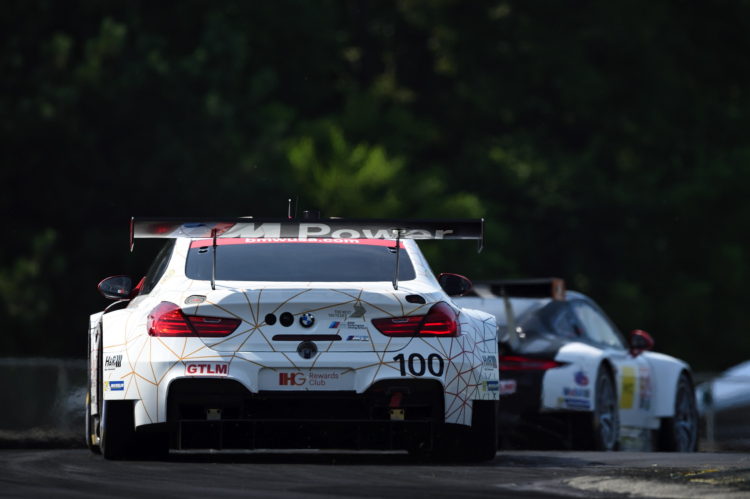 With an hour to go and after 56 laps it was Auberlen seventh and Luhr ninth in class. The No. 25 car made its second stop at the end of lap 61 for fuel, tires and a driver change to Werner. The final stop for the No. 100 car was at the end of its 66th lap and with 42 minutes left to run. Edwards then took the car back on track after it was fitted with new tires and refueled.  With just six minutes to go after 88 laps there was the first full course yellow, which lasted until just under two minutes before the checkered flag.  The incident that brought the flags out involving a Corvette, and then another between a Porsche and Ferrari at the restart, meant that at the end of lap 90 Werner was able to finish fifth, while Luhr was eighth and a lap down. 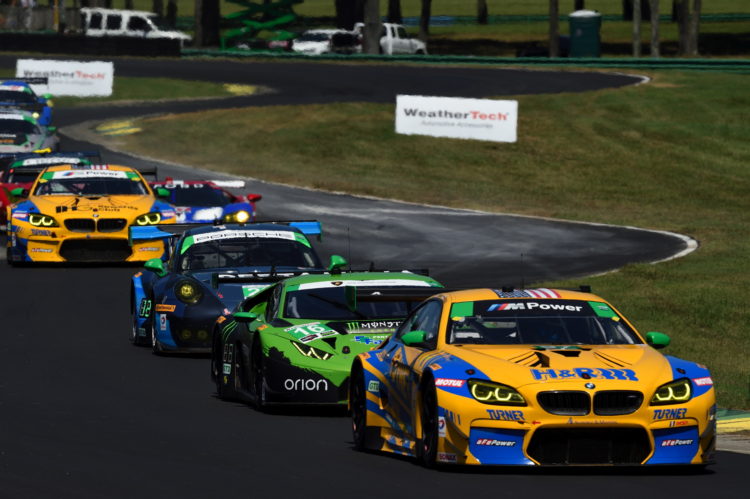 “It was a bit of a crazy race with only that one full course yellow right at the end just bunching us up for one last lap attack under green to the finish,” said Jay O’Connell, VP Technology. “Car 25 ended up fifth place and survived all the various incidents. Then the other car, unfortunately, lost a wheel early on, went a lap down and couldn’t recover from that. So it was a tough, long day for us but we look forward to COTA, the next event where we will make the car better and have a stronger performance.”

Bill Auberlen, driver No. 25 BMW M6 GTLM (5th): “It is disappointing that we could not fight at the front today, but we will never give up. The team is doing a great job, the M6 runs perfectly but we just haven’t quite got the speed at the moment that the competition has. I am now looking forward to COTA and hope we can have more pace there.”

Dirk Werner, driver No. 25 BMW M6 GTLM (5th): “It was a difficult race for us, as we just didn’t have the pace to run for a win. We gave it everything we had and the team did fantastic pit stops. The positive from this is Bill and I got points for P5 and this helps as we are trying to stay close to P3 in the drivers’ championship. We will keep on working to get more of the car and look forward to the next race.”

John Edwards, driver No. 100 BMW M6 GTLM (8th): “It was a really hard race.  We got shuffled back at the start, had a wheel fly off and then had a puncture on another set; and to top it all off, we didn’t have the pace of the other cars when they really decided to go for it at the end. We just have to regroup. We are testing this week in Austin to get ready for the next one and to figure out how we can compete again on the pace. We had such an unlucky start at the beginning of the year and this is not really what it is about, as we are here to go for podiums and wins.”

Lucas Luhr, driver No. 100 BMW M6 GTLM (8th): “It was another very frustrating race for us in the No. 100 car, but it can only get better from here. Our race was more or less over when John came in on three wheels at the beginning of the race. We do not know exactly what happened but we will analyze our data. From there on, we went a lap down but kept on pushing until the end. See you in Texas.”

Round Ten of the 2016 IMSA WeatherTech SportsCar Championship, the Lone Star Le Mans, will be held at Circuit of the Americas, Austin, Tx, on Saturday, Sept. 17. The race will be broadcast live on FOX Sports 2 beginning at 12.30 p.m ET. Follow BMW TEAM RLL on Twitter at @BMWUSARacing for “from-the-pit-box” updates all weekend.