The BMW i8 is a Master’s work of industrial artistry, but is it a Supercar? By “Old Testament” petrol metrics the answer is no. However a quick look at the supercar wiki https://en.wikipedia.org/wiki/Supercar shows that the definition of what is a Supercar has been in constant evolution.

In the evolution into electric mobility, a Supercar is defined for many as: A car that breaks existing boundaries, limited to just a tiny fraction of a percent of the cars on the road. A car that represents the future in the present. A car that inspires and captivates with a rarity of awe and inquiry wherever it travels. A car that offers exceptional rare beauty, sustainability, materials, performance and road handling. A car that is timeless and treasured for generations. 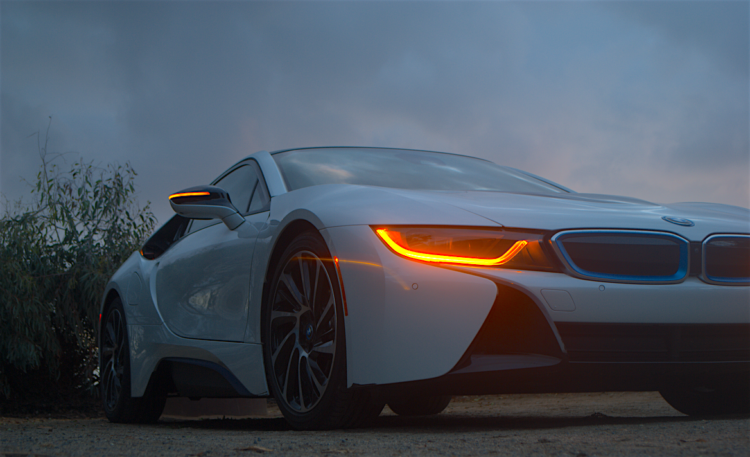 In the “New Testament,” the BMW i8 is most certainly a Supercar.

In January of 2015, the first model year 2014 BMW i8 Electronaut Edition found its way into our garage. The question was: Do I drive the i8, or will it be a garage queen? If I drive it, I could be depriving myself of a good chunk of the monetary value “when, not if” it becomes a highly prized collectible. If it’s a garage queen stored for posterity and profit, I could be depriving myself of several years of glorious experiences on the open road “when, not if” my time on earth is done. I came down on the side of drive it. The plan is to drive our BMW i8 for five or six years roughly 40k or 50k in miles, fix any battle scars and then put it up on a lift to be used only for that rarest of weekends or road trips. 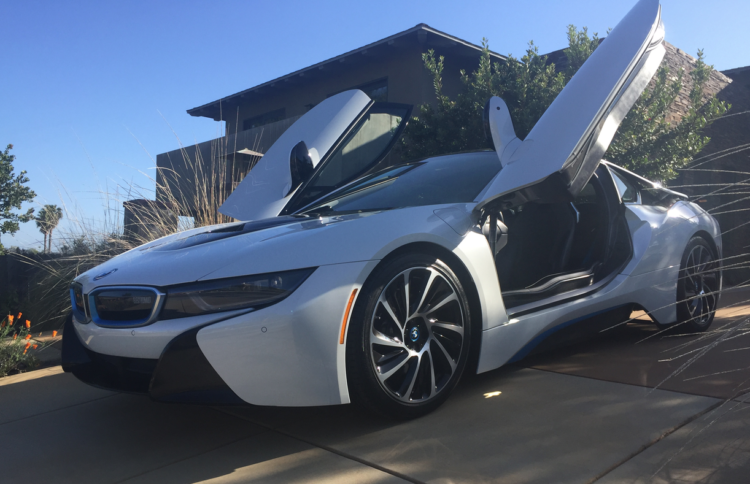 Supercars are masculine. They’re powerful, angular, snarling, some seemingly bordering on evil. After driving and living with the i8, I find the i8 to be a mixture of mostly feminine qualities. Sexy, sculptured, goddess like, exotic, and hard to understand with many personalities (own it ladies.) Perhaps it’s the swan like wings of the opened doors, or the flying C pillar reminiscent of a models long flowing hair.

The juxtaposed allure of the BMW i8’s feminine traits and diverse personalities is why in my opinion, the car is so spell binding to so many.

The i8 has many driving personalities, one moment, stealthily, powerfully slow like a Puma without sound, stalking it’s prey. One moment, incredibly thrifty and conservative, briskly able to multitask like a coupon cutting, store hopping shopper. One moment, fierce and fast, hyper-aggressive, poised, lunging and running at full speed, poetry of form, sound and speed. 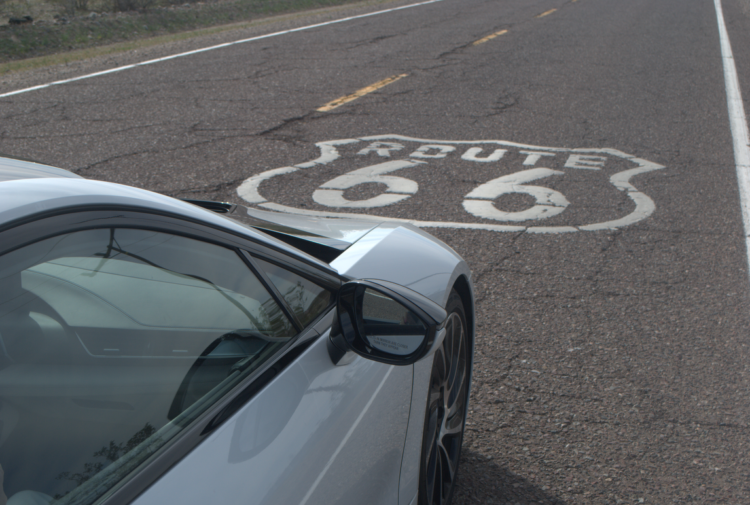 Of the three main driving modes, my favorite is slowly city cruising in stealth mode to a restaurant or hotel. When button pressing into stealth mode, I always make the swoosh sound as the car becomes silent, moving my hand palm down away from my body. Cracks me up that I do that but it’s the closest thing to piloting the Millennium Falcon this side of Tatooine. The Kessel run in less than 12 parsecs seems doable in the BWM i8.

I’m a 54 year old “big guy” at 6’3”and 325 pounds. After an awkward first try or two (it’s awkward for everyone,) I have no problems getting in an out of the i8. With its long doors, it’s very easy to swing the legs in and out and the seating position once in the car is perfection. To get out, it’s an easy one leg out, pop up and exit the car to the rear so as not to bang the head on the door now overhead. Surprisingly it’s one of the easier cars for me to get in and out of.

Our i8 has had no repairs, service issues or faults. It’s been bulletproof. I bring the i8 into BMW of Vista on a monthly basis for a hand wash and occasional detail. The car has had a scheduled service at 12,000 miles, and new tires at 14,000 miles.

Servicing the i8 in the future should be at much lower cost than its competitive class. The electric bits, somewhat detuned (ironic I know) from the BMW i3, will require little to no maintenance, the 3 cylinder engine from the Mini should be easy to service. Remember that the engine has only 9000 miles on it, for the other 5000 miles it has just been a passenger along for the ride. Tires are affordable and brakes are longer lasting as a plug in hybrid with regen.

Wear and tear on the car is unnoticeable. The interior of the i8 is as it left the showroom with no blemishes or wear marks at all. The Terra leather interior is firm, no wrinkles cracks or sags with every inch of the front interior richly appointed in the best leather. The exterior is factory fresh with one racetrack war-wound collected on a high-speed downhill on camber right-hander. I got too close at the apex and while compressed, just kissed the inside track curbing. In that nanosecond of painful sound, I curbed the front passenger wheel slightly as well as grinding a small mark on the lower front fascia and just behind the passenger side front wheel.

It happened on a track so it’s well earned. A wheel expert and a few new plastic pieces and she will be perfect once more. I’ll wait a few more years before replacing, as I’m sure I’ll pick up one or two more scars.

Our driving patterns with the i8 are primarily in two modes. We drive the i8 locally around San Diego North County in all electric mode. Most of our favorite places are within 5-10 miles or less and with a 15-mile real world electric range this covers many of our trips. We plug in L2 charging every time the car is parked in the garage. Approximately 5,000 miles of driving has been in this electric mode, with the BMW i8 averaging 90 miles per gallon. 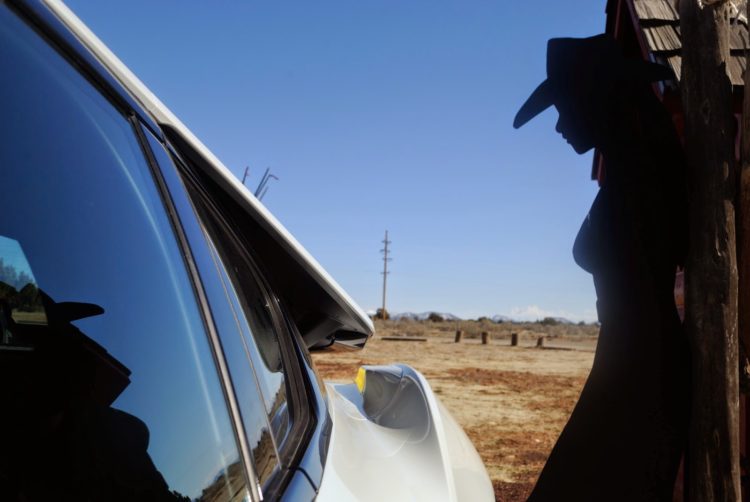 Our daily work driving and mid range trips are typically done in our BMW i3s or an electric bike.

The other mode is long distance driving in comfort mode. The i8 is a beautiful and comfortable grand touring car, it’s like flying on the road in a gulfstream jet. Plenty of room for gear for two between the rear storage area and the back seat. We’ve done a four state 2000 mile tour though Arizona, New Mexico, Nevada and California, a few 1500 mile trips to Napa and a trip or two to Arizona and points east.  Approximately 9,000 miles of driving with no plugging in has been in this mode, the i8 averaging 30 mpg.

Combined, we are averaging 48 mpg. That’s a stunning number for a car in this class. In the near future shifting to higher density batteries, I’m sure this number will continue to go up as the electric range increases.

Here’s a snapshot of life with the BMW i8 from a recent trip to Palm Desert. Julie and I were celebrating our anniversary with a dinner at Mastro’s on the El Paseo.  The valet line up in front of the restaurant was a new Mercedes AMG GT S, our BMW I8 and a Bentley Mulsanne. While we were inside eating dinner, the valet needed to put cones on both side of our i8 as folks were coming up to the car and leaning on the car to look into the windows.  I asked about the other two cars not having cones? The valet’s response was “no problem with those two.”

It’s like the other cars just disappear. Still think the BMW i8 is not a Supercar?

In sport mode going through the gears with the paddles is orchestral with the brap-brap of the turbo’s wastegate harmonizing with the changing octaves of the rpm’s. Yes the sounds are amplified and piped into the car. With the acoustical isolation of the cabin, this is a welcome addition.

There’s a space like sense of speed as the front electric motor pulls you out from the turn or away from a stop with 100% torque applied at the first revolution, then joined by the 3 cylinder turbo once spooled up in rpm’s, thrusting you forward in a manor that feels unworldly, entirely unique to the all wheel drive, front electric motor – rear gasoline engine setup. This is a vehicle architecture shared by only four cars in the world, the BMW i8, the McLaren P1, the Porsche 918 and the Ferrari LaFarrari.

To all my brothers and sisters of the pure gasoline BMW M world who think going electric is as awesome as catching the flu,  note that the Plugin Hybrid McLaren P1 just shattered the track record at the Goodwin Festival of Speed with a lap time of 47.07 seconds, a full 2.2 seconds faster than the previous record holder.

From a pure performance perspective, looking at Goodwin and Le Mans, there is no doubt that the future for the next few decades lies in the architecture of carbon fiber, all wheel drive, plug in hybrid with an ever increasing electric motor torque and horsepower, and torque vectoring control. The BMW i8 is on the vanguard of that architecture. 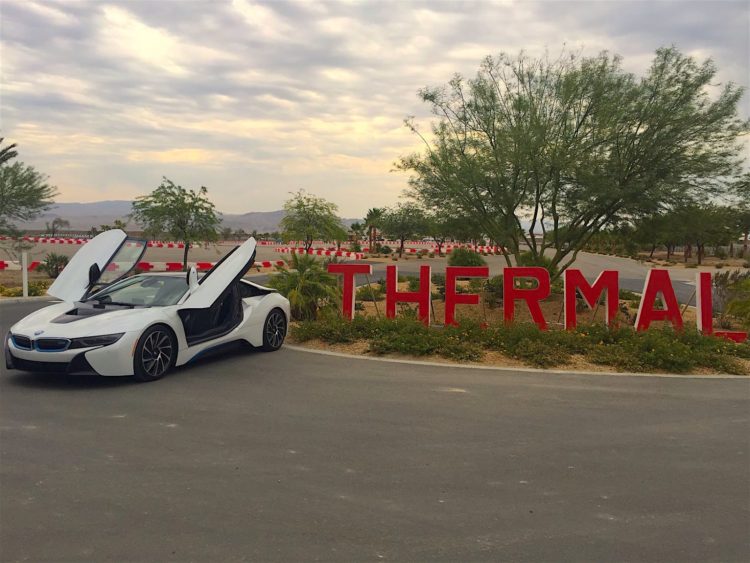 Is the BMW i8 a track car?  No, it’s a grand touring car.  The BMW i8 is shy a few hundred horsepower, needs more lateral grip and a stiffer suspension. It can keep pace with the M3 and is just a tad slower than the improved M4 around the track. That’s not a criticism of the BMW i8, it’s not set up as an M or track car. When I express that the BMW i8 could use more horsepower and grip, what I’m really saying is that there is so much more room at the untapped top end for this car. I look at the empty rear seats and say “oh man what if!”

I’d love to track this car with a stiffer and lower suspension, meaty rubber, carbon ceramic brakes, and a few hundred extra horsepower on both axels. I’m quite sure the men and women of M could considerably up the ante in a matter of months if given the chance to do so. The BMW i8 chassis and architecture is simply that good.

In a life well led with priorities met, there is room for indulgences. So it is with the 2014 Electronaut Edition BMW i8 in our garage. I remember seeing the BMW i8 concept in person at the 2011 LA Auto Show, it was a dream car, something unreal.

Part 3 of the long term review will cover the BMW i3.