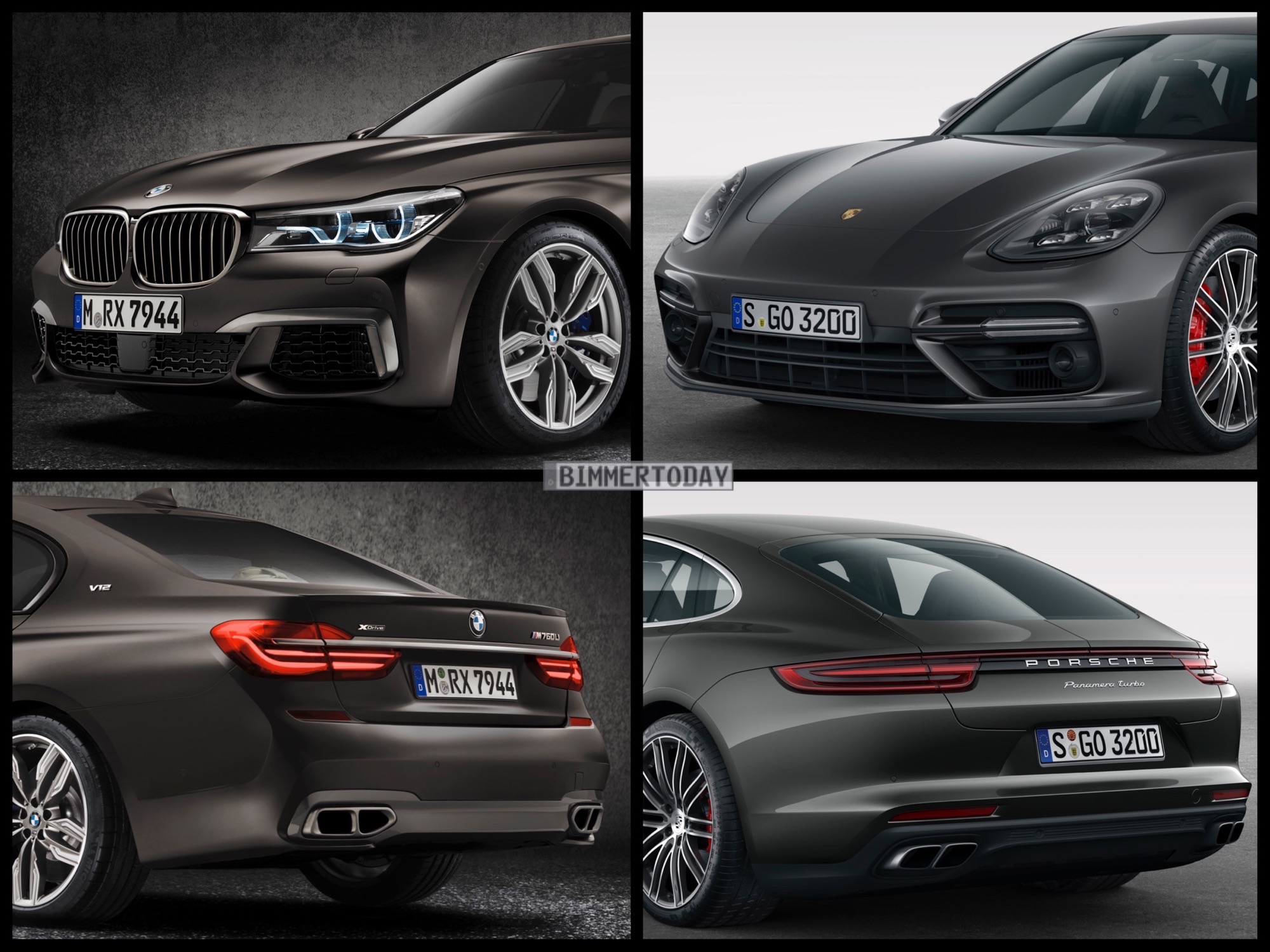 Porsche just recently unveiled its second iteration of its Panamera sedan and has been receiving quite a mixed bag of reviews. Its new styling has garnered quite a bit of attention throughout the internet, this site included. Whether or not you are a fan of Porsche or its Panamera, there’s no denying that it looks far better than the previous model and is far superior under its new skin as well.

It’s also drawing quite a lot of comparisons to many new BMWs. BMWs like the M5, M6 Gran Coupe and 7 Series are all garnering comparisons with Porsche’s latest luxury sedan. Considering that the Porsche Panamera Turbo is the highest performingsedan in the Porsche lineup, we figured it best to compare it to the highest performing sedan in the BMW lineup. 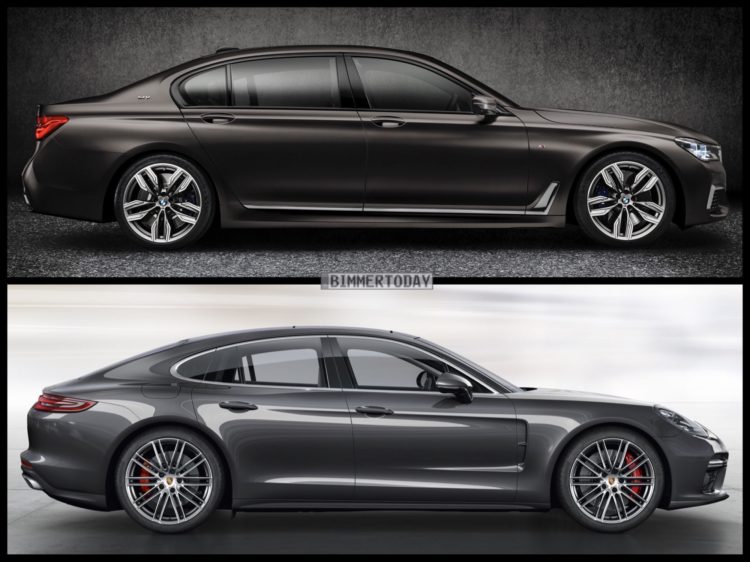 While the two aren’t exact competitors, being that the M760Li is more luxurious and larger, they’re both at the top of their respective lineups and are very similar in performance. So lets take a look at how they compare in terms of both looks and on the road.

From the outside, both cars couldn’t be more different. The Porsche Panamera is sleek, typical Porsche with a sort-of “four-door-911” look. It’s the smoother, sportier looking car no doubt. While the BMW M760Li is the bigger, more luxurious and expensive looking car that has a more usable and luxurious back seat. It also looks more powerful, with its massive grille and imposing hood.

From the front, both cars are very distinctly cars of their brands. The Porsche looks very much like a Porsche and the BMW looks very much like a BMW. So they’re very different and equally as good looking. From the back, where all of the Panamera’s controversy lies, the two cars really differentiate themselves. The Panamera is 991-esque, with its rearward sloping roofline and muscular rear haunches. In profile, it’s far better than the old Panamera and is actually quite pretty. From the directly behind it, it’s hard to not mistake it for a 911. While the M760Li is distinctly a BMW 7 Series from the rear and looks sharp and dynamic in profile. The M760Li is probably the better looking car from the side, but this Panamera earns “Most Improved”. 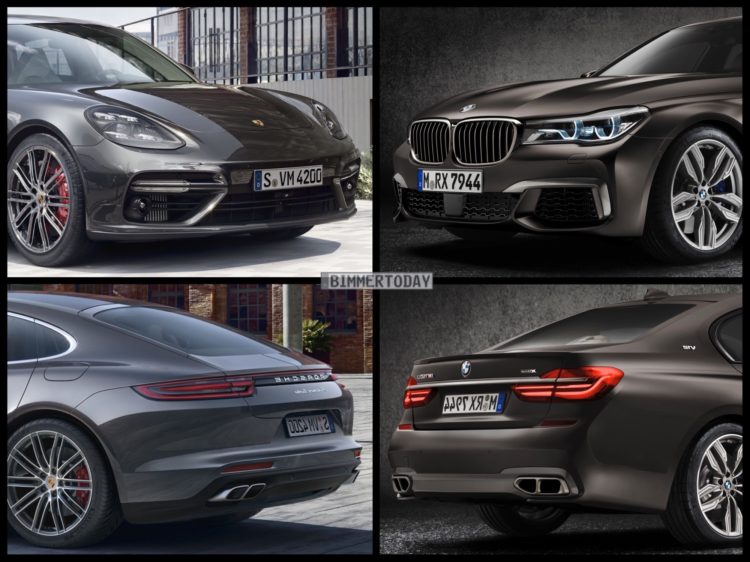 On the inside, both cars are going for a simply, highly technological and somewhat chic style. Both have clean designs that might lack the traditional luxury of the Mercedes-Benz S class, but they both pack tons of technology into a modern luxurious design. While the Panamera might have a love-it-or-hate-it design on the outside, it’s hard to argue with how nice the cabin is. The M760Li has one of the nicest interiors on the market and is very similar to the Porsche’s in terms of style.

Under the hood, the 2017 Porsche Panamera Turbo packs a 4.0 liter twin-turbocharged V8 that makes 550 hp and can get from 0-60 mph in 3.4 seconds with the Sports Chrono package. The BMW M760Li develops 600 hp from its 6.6 liter twin-turbo V12 and is capable of 0-60 mph in 3.9 seconds. Many expect the M760Li to be faster than that to 60 mph, considering that its engine is likely far underrated, but we can’t comment on that being that we haven’t yet tested it. So all we have is the claimed numbers from both companies and from that the Porsche is faster. So no need to argue until the cars are tested. 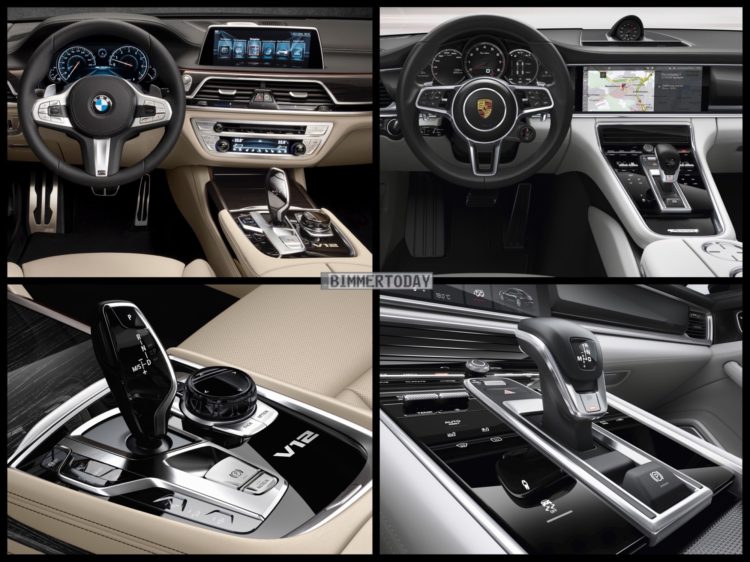 Both cars start life at around $140,000 and both pack enough performance, luxury and comfort to justify their high price tags. They’re quite different cars, though. The Panamera is clearly the higher performance and sharper car of the two, capable of lapping the Nurburgring in 7:38 which is freakishly fast for a sedan. However, the M760Li is more plush and luxurious with far more torque and power but can still handle well. So they’re both great blends of power, performance and luxury and are both perfect for their respective buyers who are looking for them.