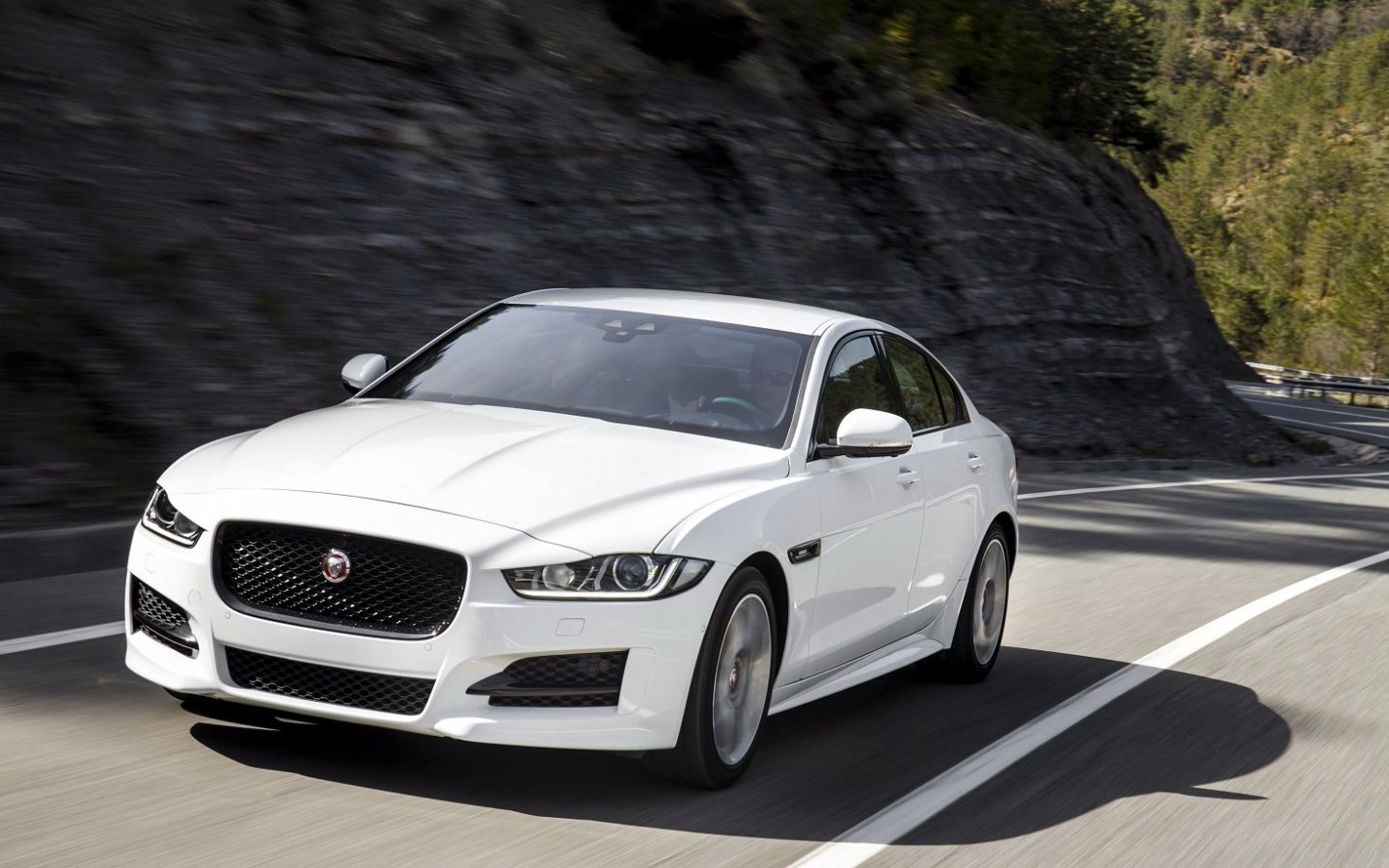 The Amelia Island Concours d’Elegance has become one of the premiere auto events to attend in North America. Now in its twenty-first year, Amelia Island is a venue where, on show day, a walk around the show field is a mixture of battle-tested race cars, old and new concept cars, an array of Zagato-bodied British and Italian cars, Ferraris, Porsches, Bentleys, and cars that defined 1950’s Americana.

While the event is big for both the average and well-heeled enthusiast, car manufacturers are using Amelia Island as a great place to introduce their latest offerings to the public. Should you arrive early enough you can hop in line to test out any variety of sports cars from McLaren, Porsche, Ferrari, Lamborghini and Jaguar to name a few. 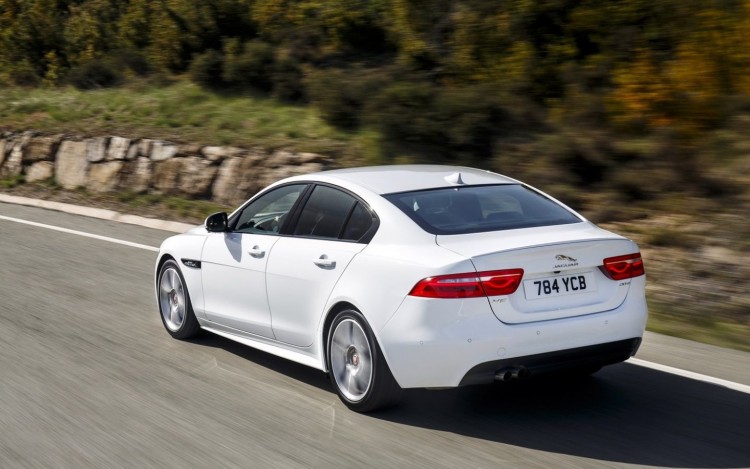 I was particularly interested in Jag and their increased presence at the event with most of their product line available to test drive. While the F-Type R’s snarling exhaust note was alluring and the XJ’s plush interior comfortable, I skipped those lines and instead went for the brand new Jag sport sedan: the XE. For those unaware the XE will be Jaguar’s first 3 Series rival in nearly a decade since the X-Type developed under Ford ownership (also known as a Ford Mondeo around the rest of the world) left the market.

The X-Type didn’t exactly set the world on fire when it had to go toe-to-toe with far better offerings from the superb BMW E46, Audi’s B6 chassis and the original Lexus IS. As such, the X-Type never had much of a leg to stand on facing German cars already into multiple generations of their compact sport sedans.

The exit of Ford in favor of Tata provided Jaguar with a much needed reprieve from a clumsy, platform-sharing benefactor. Tata, on the other hand, provided autonomy and funding – the room Jaguar needs to re-establish itself as brand that can stand on its own four wheels. As a volume car to compete in the sport sedan segment the XE is the cornerstone of the plan to springboard Jaguar back into competition against the Germans. 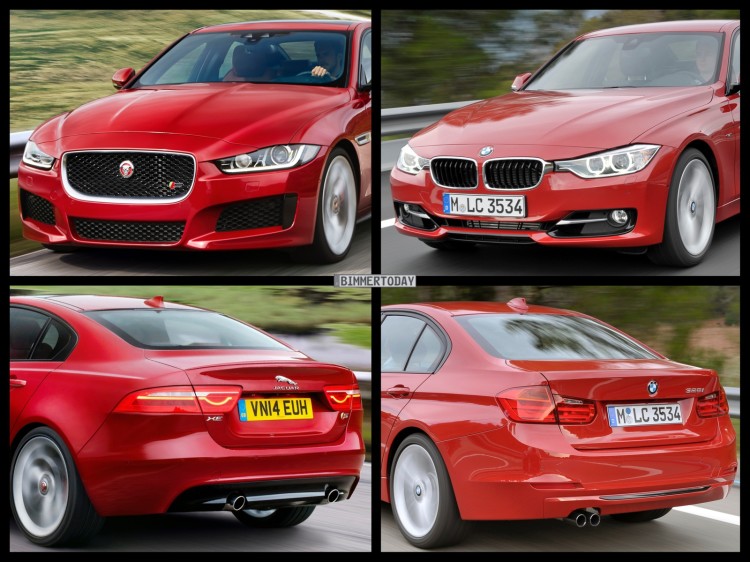 Outside of the Ritz-Carlton, I glanced over a Polaris White XE R-Sport powered by the range-topping supercharged 3.0L V6 churning out a not unironic 340 horses. The exterior design could be called “safe” in that it appears to be a mix of scaled down XF at the nose with similar headlamps and front valence design and conservative, slab sides which taper to hortiziontal tail lamps which pay homage to the sexier F-Type. The rear design punctuated with a pronounced rear lip. In R-Sport (equivalent to an M Sport Package) the XE looks poised and athletic – the conservative exterior, while handsome and safe in execution could have stood to be more aggressive to set itself apart from the more muted designed from BMW and Audi. 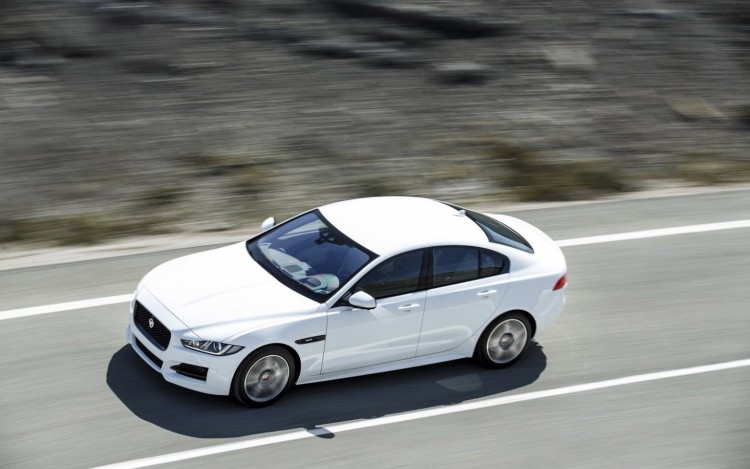 Slipping behind the three-spoke Type-R steering wheel, I was able to take in the very simple, no-nonsense design. The XE’s interior has an appealing cocoon-like feel courtesy of the concave door panels and “stepped” facia abutting the windscreen – straight off of the ritzy XJ sedan. Glancing down the dash the interesting if gimmicky silver knob gearshift anchors the console and is surrounded by a long patch of carbon fiber. Appearances are great but plopping my iPhone onto the dash revealed a hollow, plasticky thud. Jaguar have gone on record with significant efforts to undercut the Germans on pricing and unfortunately the interior, in some places, feels as though that is where the gap is bridged. 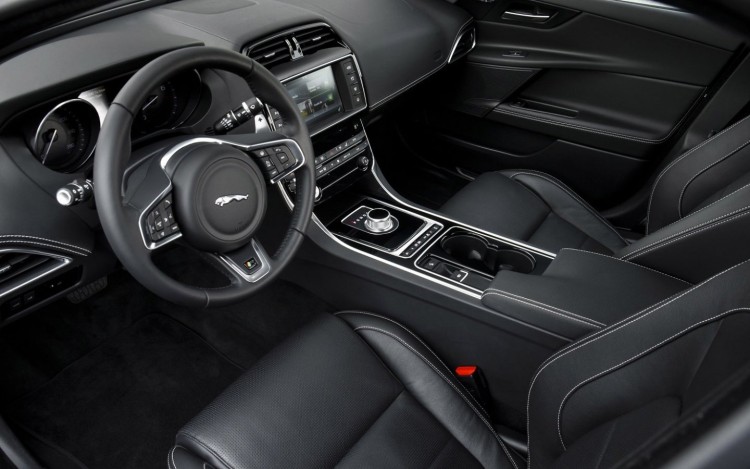 My seat time was limited as this was nothing more than an open manufacturer’s test drive. Granted, I spent an hour in the car, though mostly due to the traffic jam that becomes Amelia Island on the Saturday before the show. Between cars and coffee, show attendees and participants the idyllic, moss-draped roads of Amelia are packed for that one weekend every March.

In the handful of stretches available to let the baby Jag prowl, a dab of throttle gave a satisfying, burbly growl via the dual exhaust tips. Over the road the XE is well-behaved and thanks to adaptive dynamic systems, the driver can adjust throttle, gearshifts, and suspension stiffness to their personal preference. Steering feel was comparable to the BMW F30 in that it feels light to the touch although switching to Sport mode helps stiffen up the inputs. The engine, despite being supercharged, never seemed to experience much lag and had a linear power band once above about 3,000rpm. 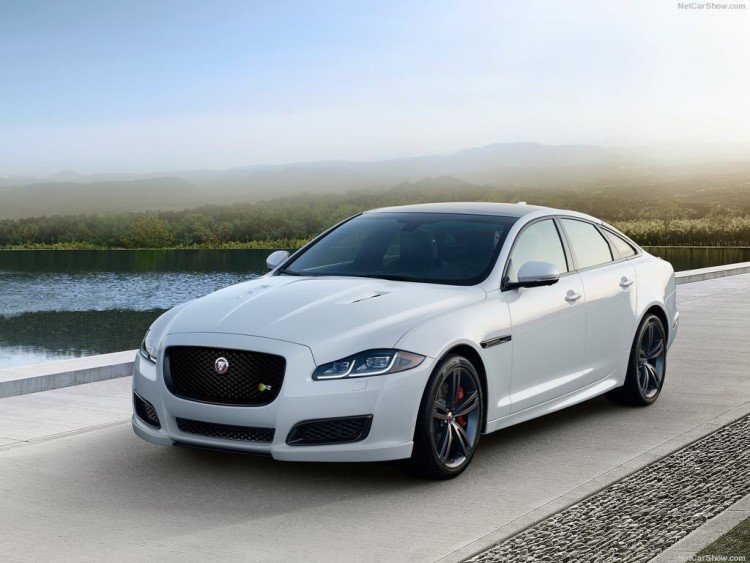 At slower speeds and with the dynamic settings dialed back, the XE felt happy to waft along, quiet and without drama. Once back in traffic – I left the Jag in Comfort mode with start/stop activated. It was at this point we experienced a strange sensation through the car – a sort of hiccuping effect where, with my foot off the brake and throttle, instead of creeping forward in a low gear the XE would stutter forward. It felt as though the engine was starved for fuel and teetering on a stall that never quite happened. Odd to experience but it should be kept in mind this was a preproduction model.

I have genuine excitement for the Jaguar XE but a genuine expectation that it needs to meet the standard for the segment set forth by BMW – I didn’t get a terrific gauge of how it stacks up against the Bavarians. The XE represents the road back to broader appeal for Jaguar and, with the new SUV the F-Pace, represent the bread-and-butter vehicles on which offerings like the diabolical F-Type SVR can be funded. While my test was very limited in scope and in a pre-production car no less, I am hopeful that Jag can find the broader audience it seeks with the XE to give 3 Series buyers more options.

A little competition never hurt anyone, after all. 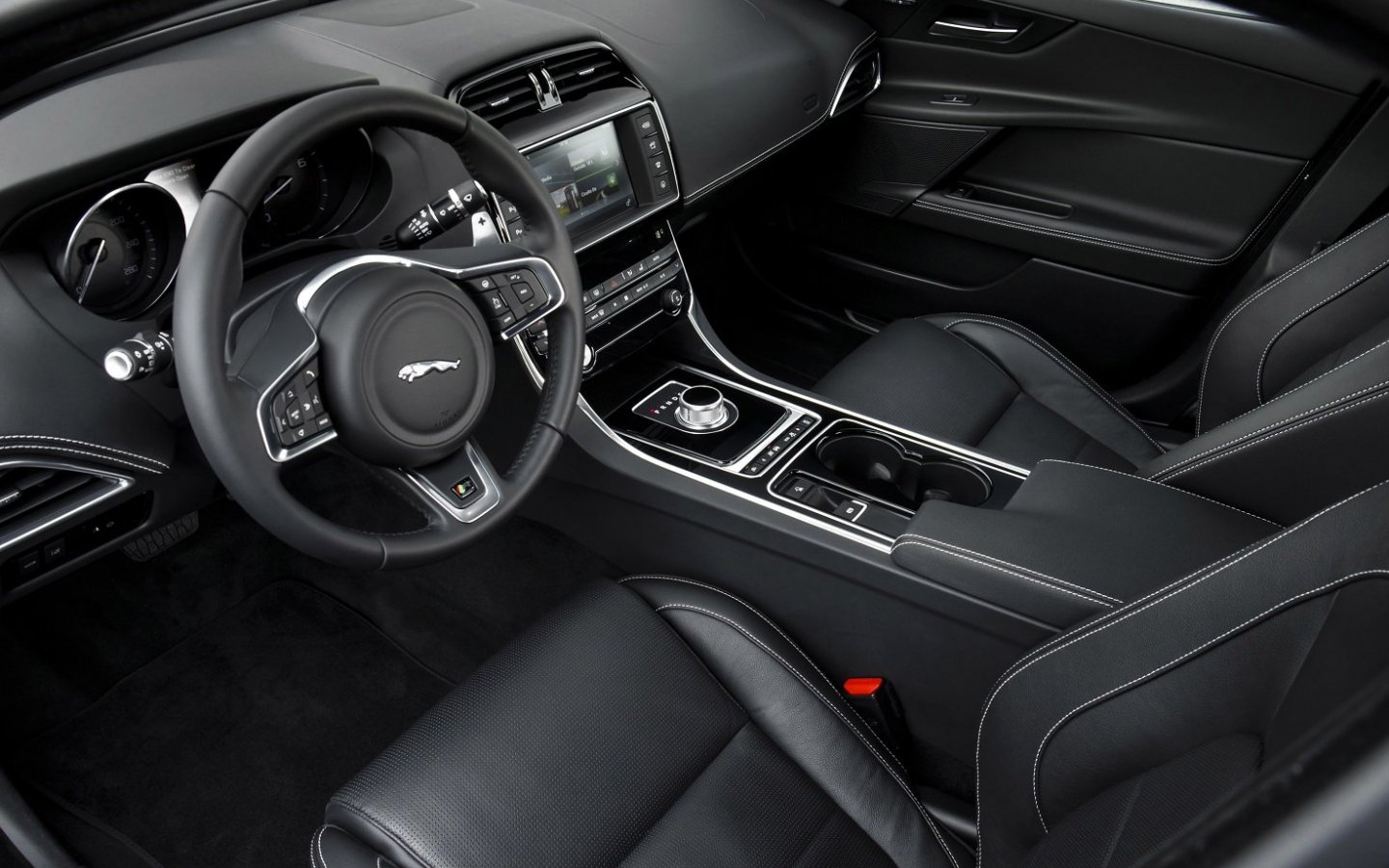 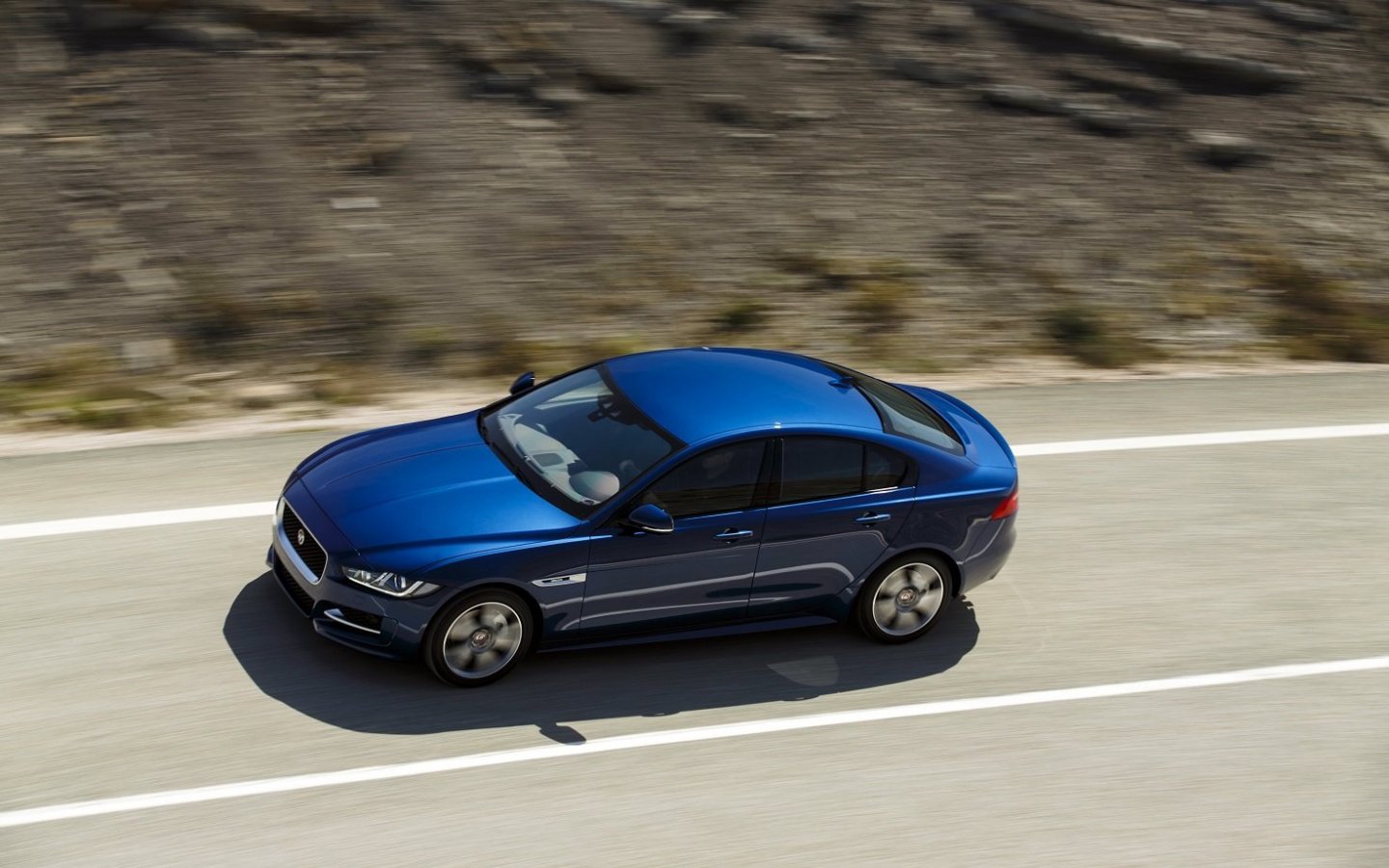 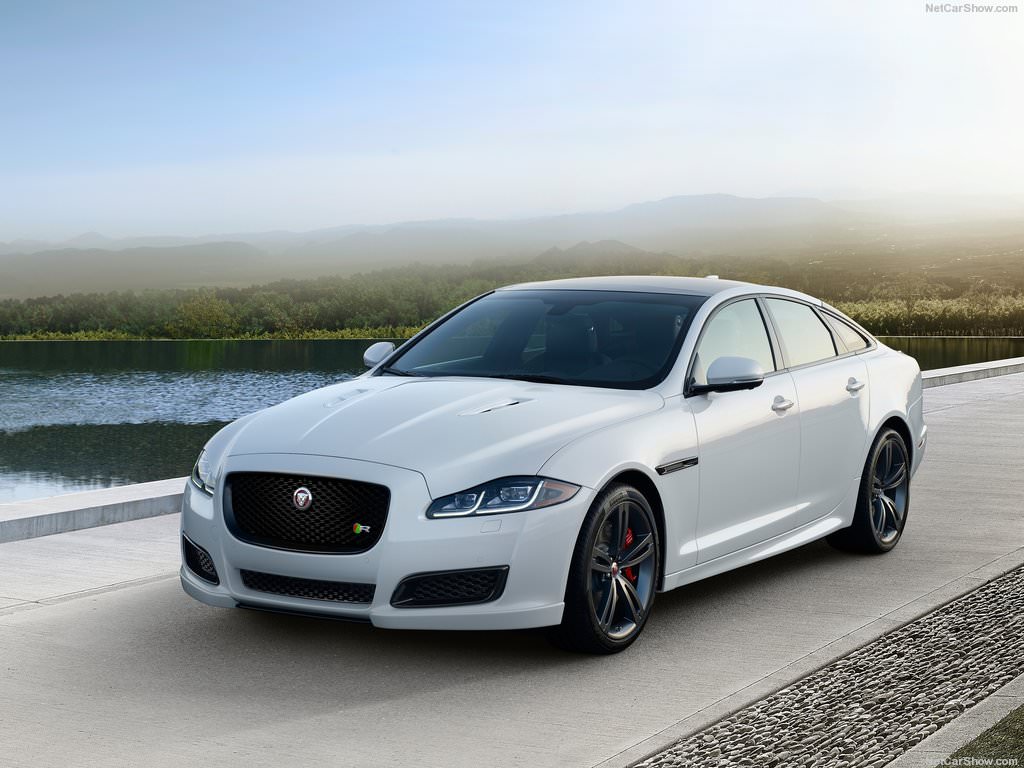 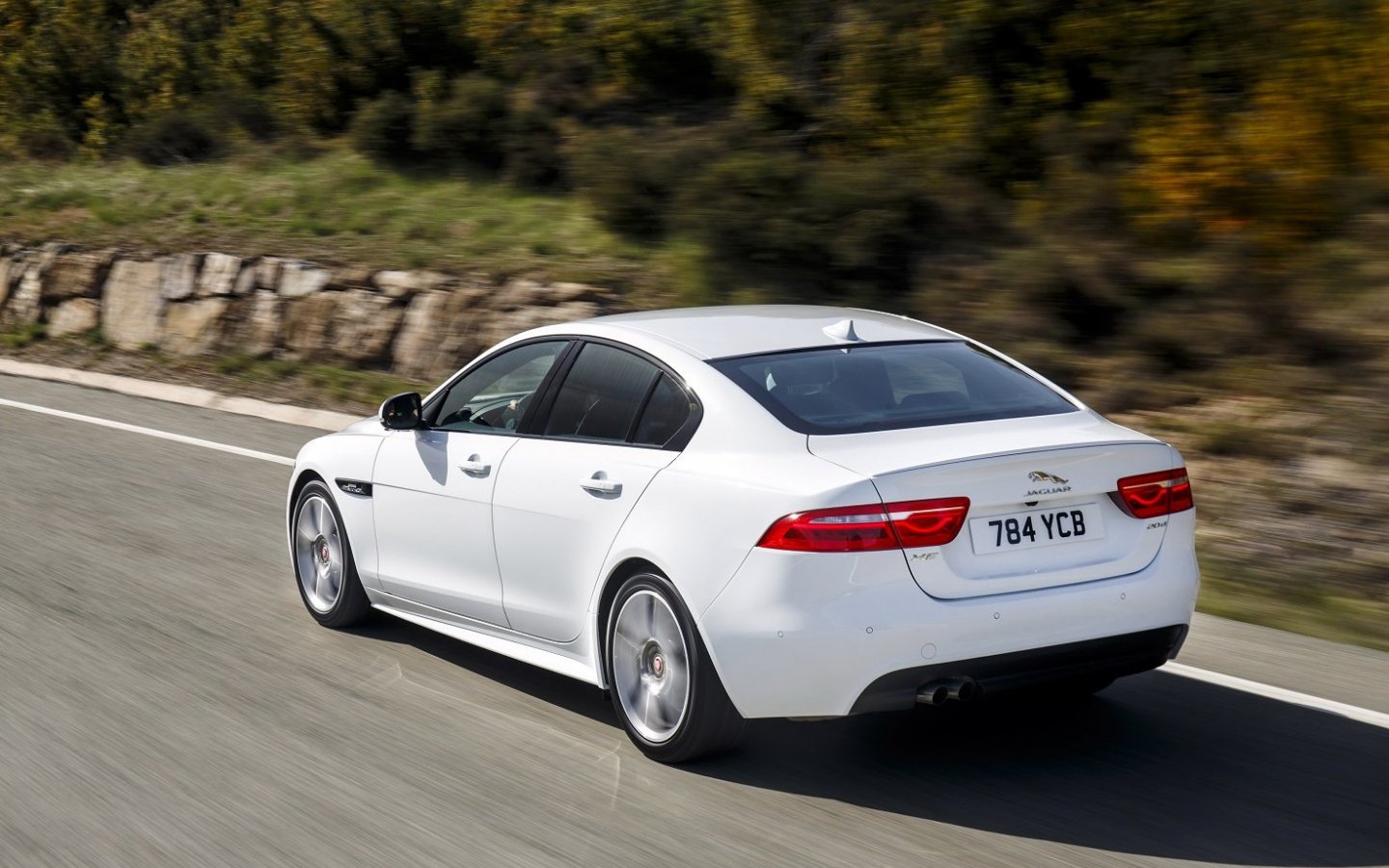