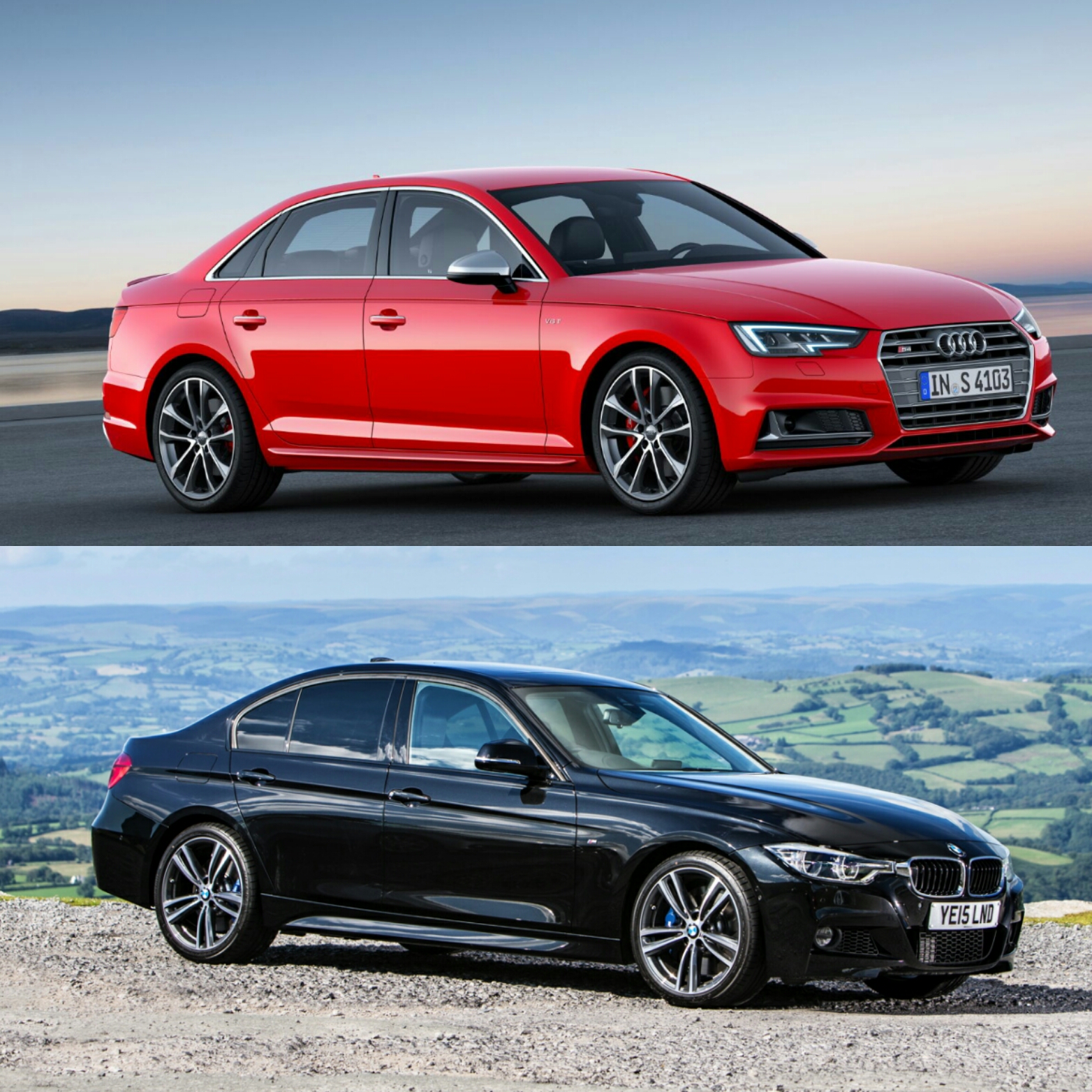 Audi has just recently released the details of its S4 and S4 Avant, which will be hitting European showrooms this summer. With the S4’s release, the BMW 340i will have a new competitor to deal with, one far more capable that the previous Audi S4. While we won’t be able to test the Audi S4 until sometime later this year, we can compare how they stack up on paper and how they look, both inside and out. So let’s take a look at how they compare.

The Audi S4 will be the BMW 340i’s main competitor when it finally debuts, as the two cars have always been main rivals, in terms of performance and driving dynamics. When it comes to looks, they’re actually quite a bit different. 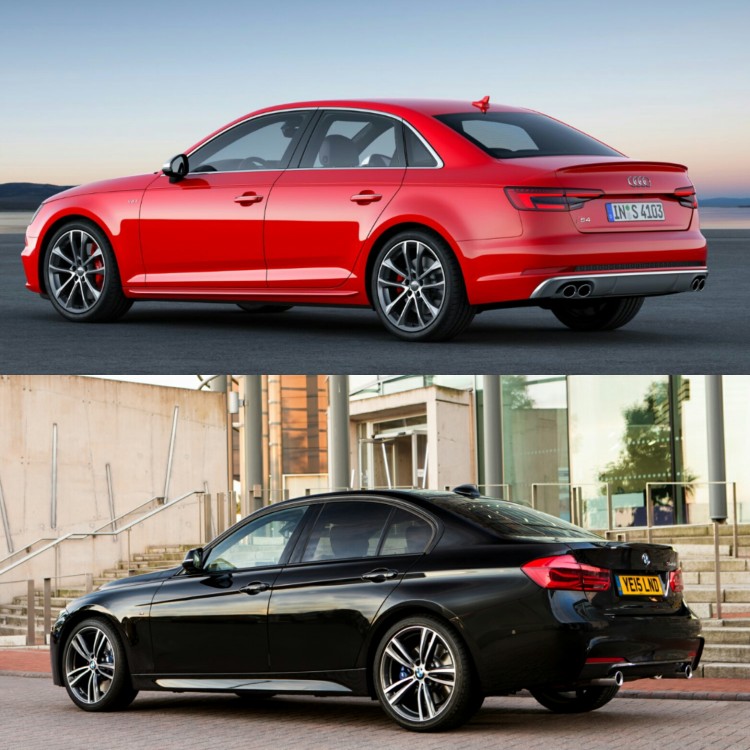 Whereas the BMW 340i is a typical 3 Series in its standard guise, the S4 is only a performance car and it shows in its looks. The 340i doesn’t start to look like a sports car until either the M Sport package or Track Handling package are applied. The S4 looks like a sports car from the get-go.

On the inside, it’s much the same. The BMW 340i looks like a standard 3 Series on the inside, unless it’s optioned with one of the aforementioned sports packages. With those packages, the 340i can look very sporty on the inside, but without them it’s just a standard 3 Series, while the Audi S4’s interior is very sporty to begin with. The contrast red stitching, red ambient lighting and flat-bottomed steering wheel give the S4 a very aggressive feel. Looks are subjective so you may feel differently, but the S4’s much newer interior feels fresher and looks a bit nicer. 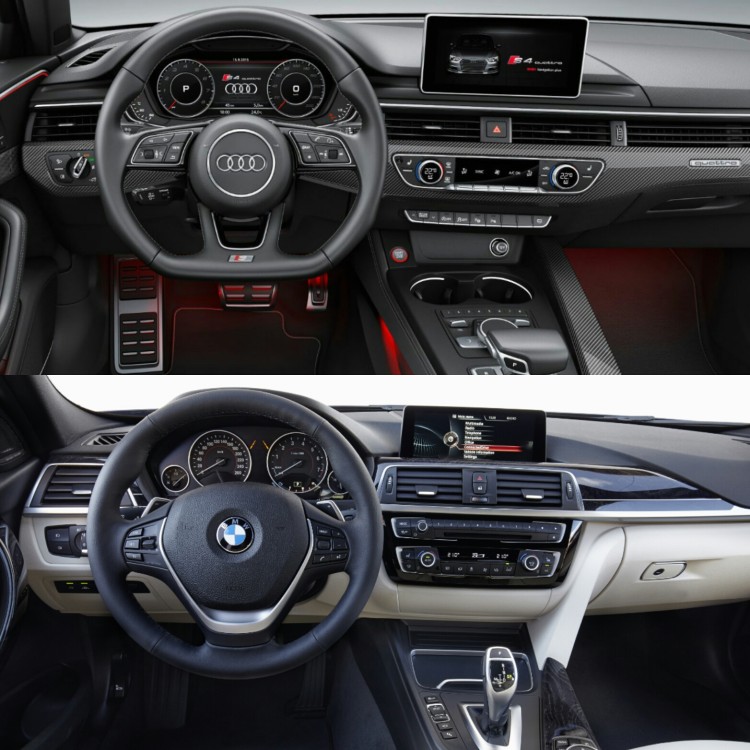 In terms of power and performance, things get interesting. The Audi S4 replaces its old 3.0 liter supercharged V6 with an all-new 3.0 liter turbocharged V6, one that develops 354 hp and 368 lb-ft of torque, the latter of which being available from 1,370 rpm. This is compared to the BMW 340i’s 3.0 liter turbocharged I6 that makes 320 hp and 330 lb-ft. The Audi S4 weighs in at 3,594 lbs, compared to the BMW 340i which weighs at around 3,600 lbs. The Audi S4 shuffles gears with an eight-speed ZF-sourced automatic, the same transmission that is optional in the 340i, and no manual option is available. When both cars are equipped with automatics, they can get to 0-60 in about the same time. It takes a claimed 4.7 seconds for the S4 to do the sprint and BMW claims 4.9, but we’ve seen as low as 4.6 with xDrive.

Which leads to another difference between the two cars. The Audi S4 comes with torque-vectoring Quattro all-wheel drive as standard, while xDrive all-wheel drive is an option on the 340i. However, many purists will prefer the 340i for the fact that it can come with rear-wheel drive and a manual, whereas the S4 is automatic and all-wheel drive only. 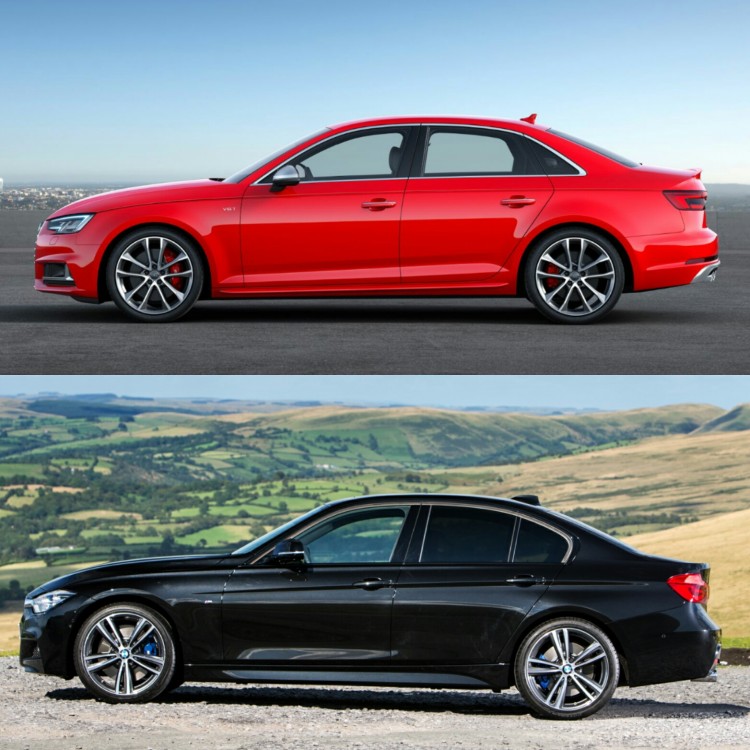 I sampled the BMW 340i last year, an xDrive model with a six-speed manual, and it was a very fun car to drive. We obviously haven’t driven the new Audi S4 yet, so we can’t comment on which car is more fun to drive. But it should be interesting to see how they stack up in real life and not just on paper. The Audi S4 is more powerful and lighter, but it seems as if BMW makes better use of its power, as they receive similar claimed performance figures. Both cars looks great, are very fast and should handle very well. We can’t wait to put them together.