How to operate an electric car in the snow 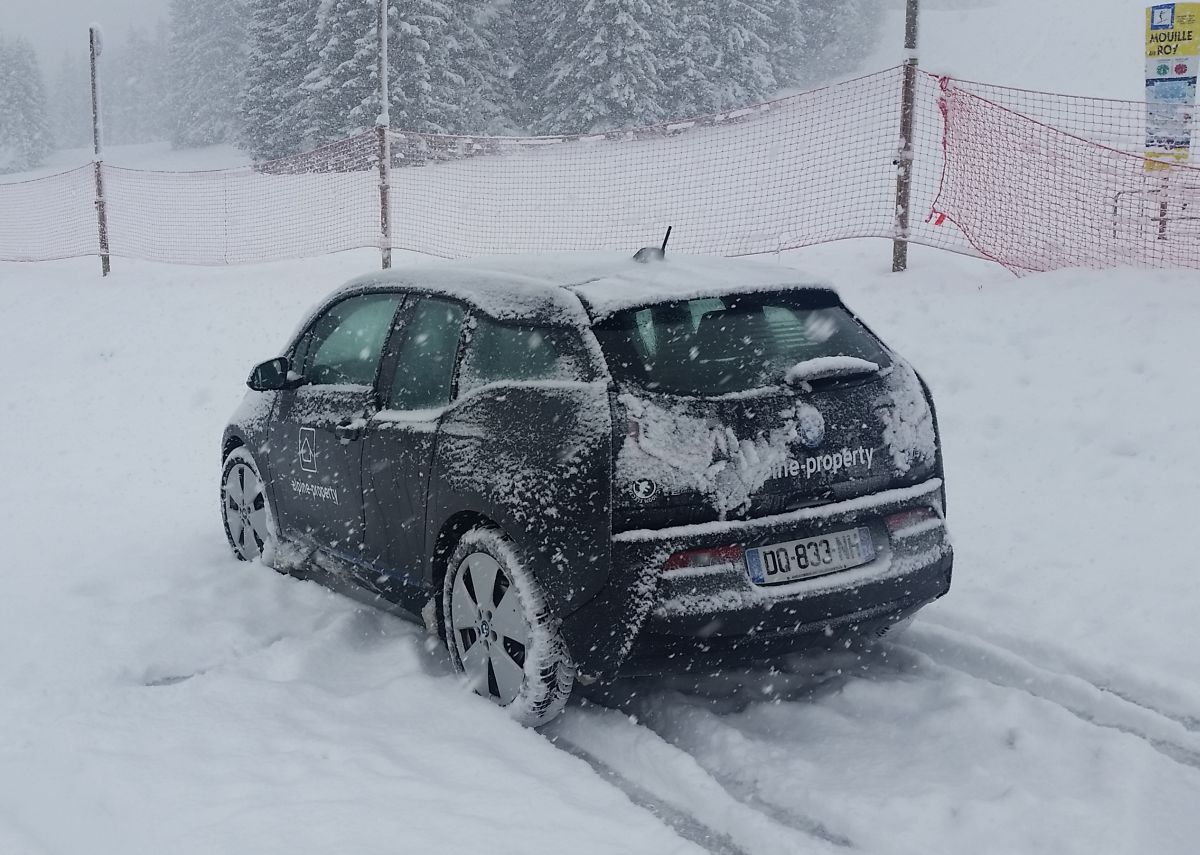 Story by Gareth Jefferies at Alpine-Property.com

When I was 10 (1981), my Dad worked for an electric car company. Electric cars made sense to me then and have made sense to me ever since. I’ve referenced that historical vehicle at the bottom of this article. Unfortunately for some obvious and rather selfish reasons electric cars have never made sense to the rest of the motor industry. Thankfully that is starting to change quite rapidly. 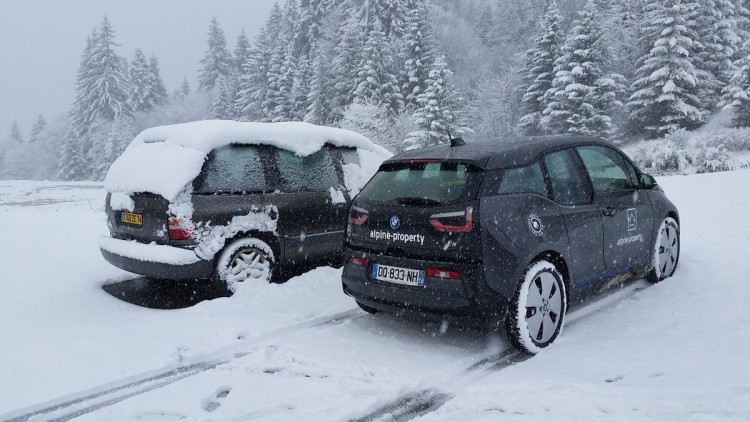 I should say too that I don’t live a particularly “green” life, I do ride a bike (I enjoy it), I don’t fly much (can’t afford it) I would like to save energy (save money). I’ve always disliked conventional car engines though (ICE). Starting them up for short journeys seems wrong, both mechanically and environmentally, they cost a lot to make, run and maintain and they are dirty and smelly. I agree with Arnold Schwarzenegger too, he sums it up quite nicely in this little rant. Despite not been particularity “green” I will be voting for whichever prospective government proposes the greenest agenda. Even if that means higher taxes!

I had been running a VW Caravelle Minibus through my own company and for various boring tax reasons had to sell it. I wanted to replace it with a vehicle I could use for my work but that the French government would not tax to death. The French Taxe sur les véhicules des sociétés (TVS) is as onerous at that in UK (Company Vehicles Benefit-in-Kind tax) both taxes are linked to how polluting a car is, this is measured in CO2(g/km), a fully electric car emits no CO2 so fit the bill well.

I had a few cars to consider.

Nissan Leaf or the Renault Zoe, I think if I was buying a car personally as the second family vehicle I would have gone for one of these, they are half the price of the BMW and (as far as I can tell) almost as good. I wanted a company car though, that would accommodate my colleagues and represent the business out and about. I don’t think either of these fit the bill.

Mitsubishi Outlander PHEV, I live in a ski area so why not a 4×4? Mitsubishi are targeting people like me too, their advertising is all about selling to business users. I discounted this car for 2 reasons. Plug in Hybrids are fiendishly complicated things and I’ll only consider one after they’ve been more thoroughly tested on the public. And to warm the cabin on this car the petrol engine has to start, making the whole idea pointless for half the year around here! 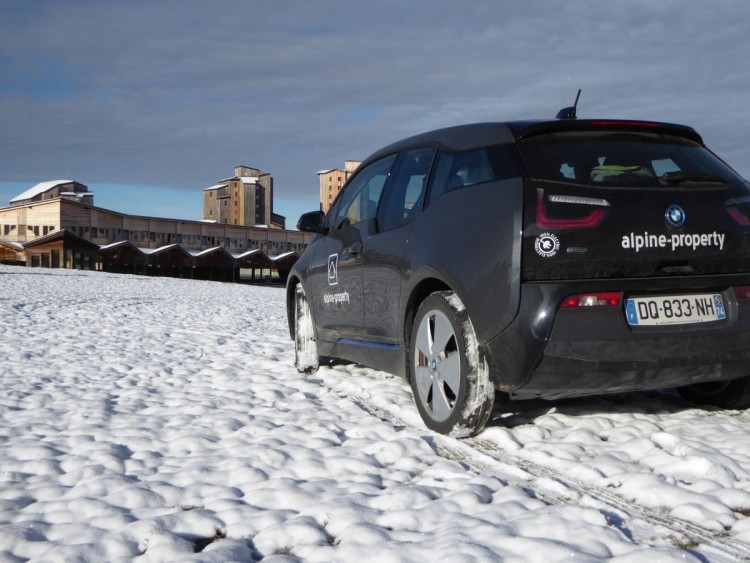 I ended up going with the BMW i3. I was rather taken with the fact it wasn’t a converted conventional vehicle, it was designed and built from scratch. It is no heavier than a conventional vehicle (its frame is all carbon fibre, something that will attract all MAMILS) and when I test drove it I could not fault it. It came across as a very sorted car. I have the 100% electric version. I decided to forego the “range extender“, in for a penny in for a pound.

The question is, “will it work well in the Alps?”. It has a number of issues going against it.

Where I live, if the road isn’t going up, it’s going down, there are very few flat bits. When I picked up the i3 from the dealer in Annecy I had to drive 100km home, over two fair sized cols, with a total ascent of 1300m. The car showed a range of 135km on the dash. The range anxiety started straight away. I need not have worried, the estimated range was spot on, the hills made very little difference. It seems the regenerative breaking actually worked! Some people call it KERS (from Formula 1) but I don’t think that is quite right. 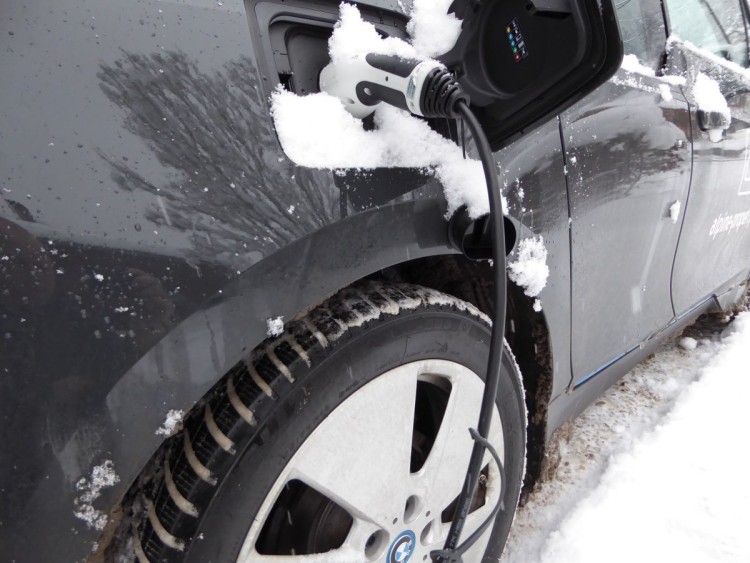 As far as winter driving is concerned, I’m writing this in mid-January, and have driven many times in the snow this year.  I bought Bridgestone Blizzak‘s and had them fitted in November. According to the review I have linked to these should be slightly less grippy but last longer than the Nokian Hakkapeliitta’s that are available. As far as I’m concerned they are excellent, the narrow profile of the tires on an i3 obviously help in snow and the “fly by wire” automatic anti-slip, stability controlled traction that you get from a modern automatic means that I have never been out of sorts on the corners. So when compared to the other FWD cars I have owned, the i3 performs better in a straight line and from a hill start and is equal (but probably easier to drive) on the bends. The car comes with various driving modes. Comfort, Eco and an option to reduced traction control. I’ve tested them all multiple times. Your best option in the snow is Eco, the other options might be more “fun” but they are no more effective at getting up a hill. In fact I’d like the car to default to Eco. I’m not sure it will though.

It was -12C (10F) last night, generally the night-time temperature between November and March in this part of the French Alps is below freezing, an average might be -3C(26F), a minimum -20C(-4F). This car is kept outside. The cold temperatures do have quite a marked effect on the range. Over the summer I could bank on 135km from one charge but at -3C that would be 110km and -12C 100km. I’m told this could be improved by plugging the car into a high power socket at home. This would allow the car to draw more power to operate a heating circuit around the battery and to heat the cabin too. I only use a domestic socket which doesn’t supply enough power to do this. The domestic socket will only help heat the cabin [this might not be correct, please see the comments below, more investigation required!] I have resisted having the better socket fitted because of the outlay (1000€) and the running costs. Here in France we have to pay extra on our electrical supply contracts for more power. In this case another 300€ a year. We have another car in the family so I can live with this reduced range. 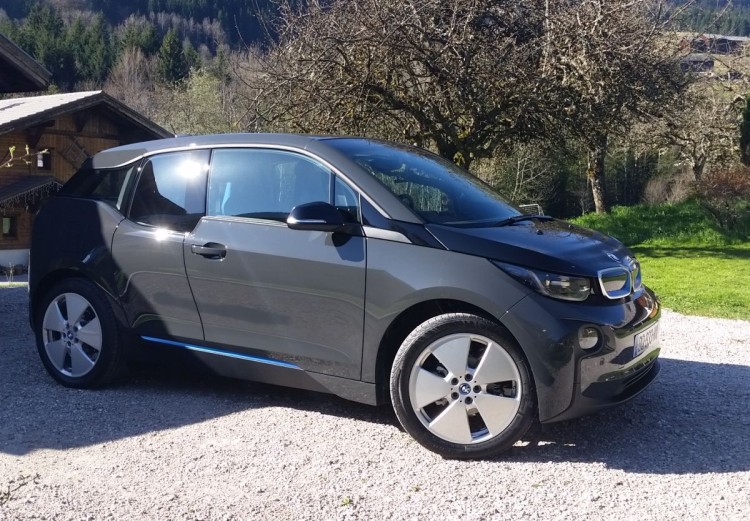 This is the first car I have owned that will pre-heat the cabin prior to driving, this can be a real luxury, especially when there is an impenetrable layer of ice across the windscreen. 5 min on pre-heat and the windscreen will be defrosted, condensation free and the cabin at a comfortable temperature. This facility can be controlled from the key fob, your phone or programmed in the car. I find setting a departure time from my phone the night before works well. I do quite a few short journeys that with an ICE vehicle would not allow time for the engine to warm up the heating system. The heating system in the i3 copes well with these journeys.

A downside with a completely new car like this is that the lack of reasonable priced accessories. Snow chains and roof racks cost twice what they should.  As far as I can see RUD-matic chains are the best value. I have not bought a pair yet though. As for ski racks, the Sea Sucker might be the only option.  I can recommend some floor liners though. Getting in and out of cars in the snow just fills the foot-wells with salt and water. I’ve fitted a pair of these WeatherTech Floor Liners which have been excellent.

So all in all I can recommend using an electric car in the snow. Though for a family in the mountains I can only see it working as a second car. Even though it is a second car that will do 90% of the journeys required. A word of warning though, if you get as far as visiting a dealer, the first question they’ll ask is “do you have a spot to plug it in?”, they won’t work without a place to charge them up! When making the purchase you are then faced with a bewildering number of “extras”. After asking around I went for the heated seats and an additional heat pump to help heat the cabin. I think that I’d do the same again but only because I live where I do, I would not bother with either otherwise.