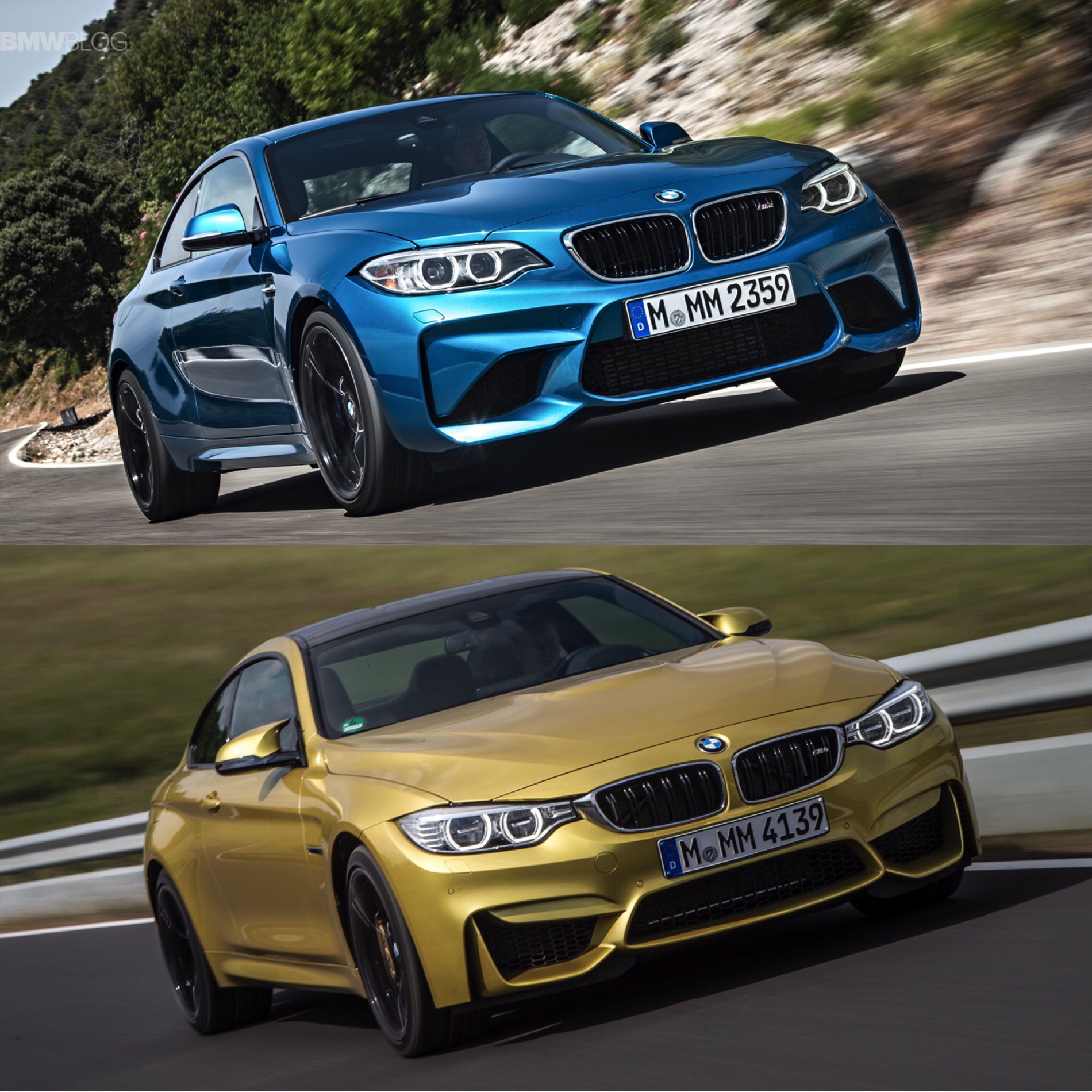 We’ve recently just become privy of the details surrounding the most anticipated BMW in ages, the BMW M2. But even more importantly, we’ve gotten to see just what the beast looks like. And it looks good.

Based on the already excellent looking BMW 2 Series, the M2 could possibly become the best looking Bavarian horse in its stable. It looks as if it got treatment similar to the BMW M4, but modified slightly for the M2. The front air dam and brake cooling ducts seem larger on the M2 than on the M4 and the rear reflectors are vertical on the M2. The quad exhaust pipes also sit under a sort of rear diffuser on the M2. It also looks more muscular than the M4, despite having a shorter wheelbase. And because the M2 is a narrower car than the M4, its bulging wheel arches are far more pronounced than on the M4, similar to the M3. 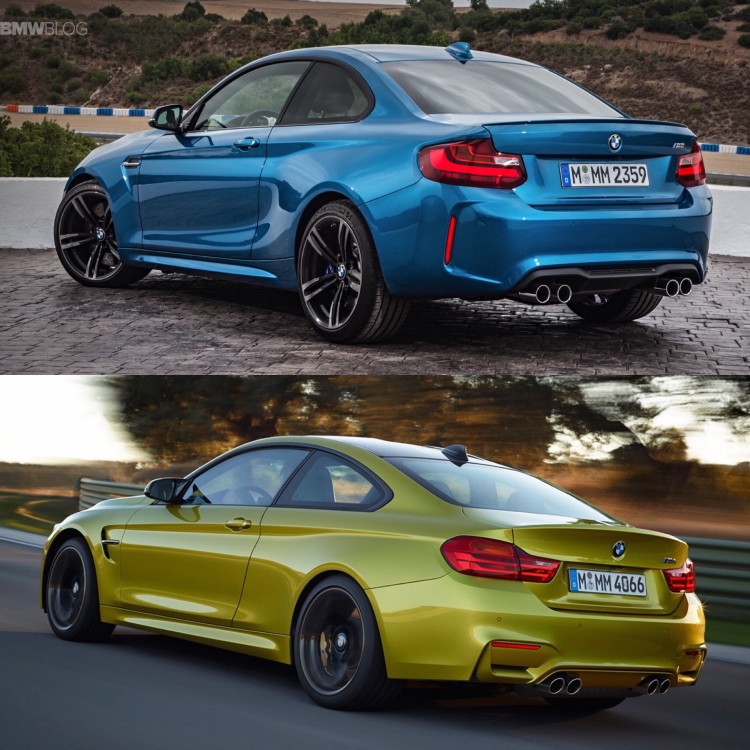 The M4 is still a beautiful car, but the M2 is the more aggressive looking of the two. The only complaint, that I have at least, about the M2’s design is that it seems as if it needs to be lowered just a couple of millimeters. It seems to site quite high, whereas the M4 sits nicely and seems to have a bit better of a stance. Having said that, the M2 is a gorgeous and seductive looking thing.

The differences on the outside of the cars are far more noticeable than on the inside. In fact, both interiors are almost identical, aside from some minor details. The dash on the M2 is obviously much narrower and has its trim directly above the glovebox, whereas the M4 has its trim running through the center stack. The M4 also has much more leather on the inside than the M2, with leather covering the glovebox, door pulls and even some of the center console, all places where the M2 has either plastic or carbon fiber trim. The gauge cluster is also bigger on the M4, having separate subdials for fuel and temperature, whereas the M2’s fuel and temp gauges are built into the bottom of the speedo and tach.

Aside from those minor details, though, these two interiors are pretty much the same. Nothing new to see here. But then again, almost all M cars have the same interior these days. Only really high-end ones, like the M6 Gran Coupe, really differentiate themselves on the inside. Both do their job though and give both the M2 and M4 a sporty and aggressive feel. 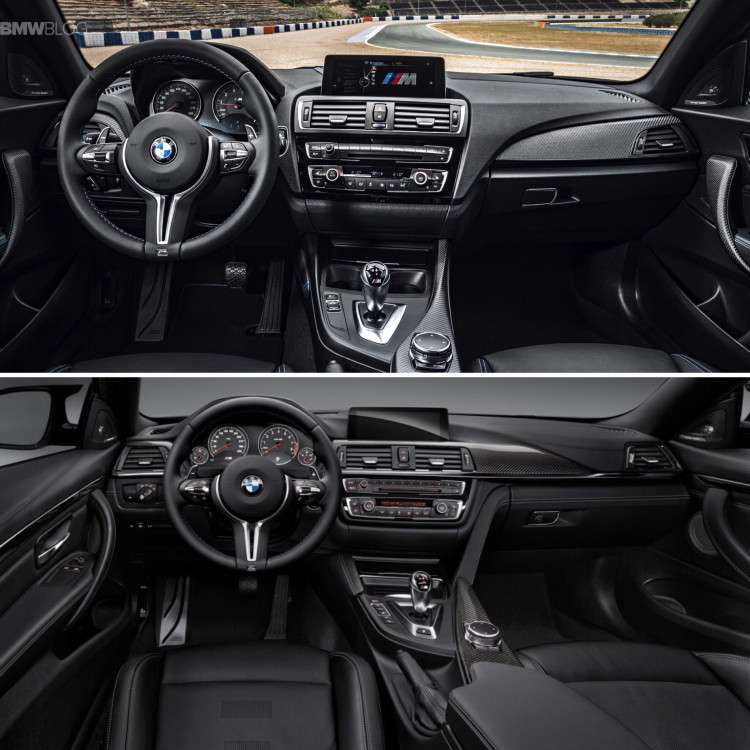 
The M4 has an absolute powerhouse underneath its low-slung hood. A twin-turbocharged 3.0 liter inline-six engine makes 425 horsepower and 406 lb-ft of torque, compared to the M2’s single turbocharged 3.0 liter I6 engine that makes 370 hp and 343 lb-ft of torque. A 55 hp difference is big, however, the M4 weights a couple hundred pounds more, at around 3,600 lbs. The M2 is a featherweight, by comparison, tipping the scales at 3,196 lbs. dropping 400 lbs from the M2 should more than negate the difference in horsepower.

Both come available with the same transmission options — the choice of a six-speed manual or seven-speed DCT. The manual in both also come with auto throttle-blipping, something that can be very helpful on a track or twisty road. And both DCT’s come with different programmable modes for softer or more aggressive shifts.

Both cars also come fitted with BMW’s Active M Differential at the rear. The electronically controlled diff optimizes traction and improves directional stability on both cars. That’s important when you’re putting all of that turbocharged torque to just two wheels. 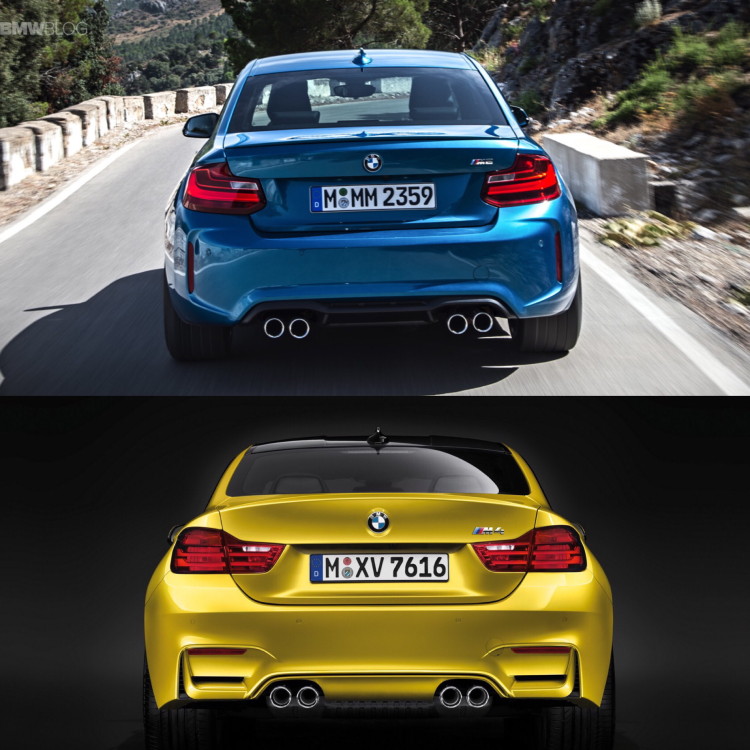 Overall, the BMW M2 looks to be the smaller, but more muscular little brother to the M4. The M4 might have more overall might, but the M2’s small size and lightweight could give it the advantage. We’ll have to reserve judgement until we drive the M2, but things are looking good for the M4’s baby brother. 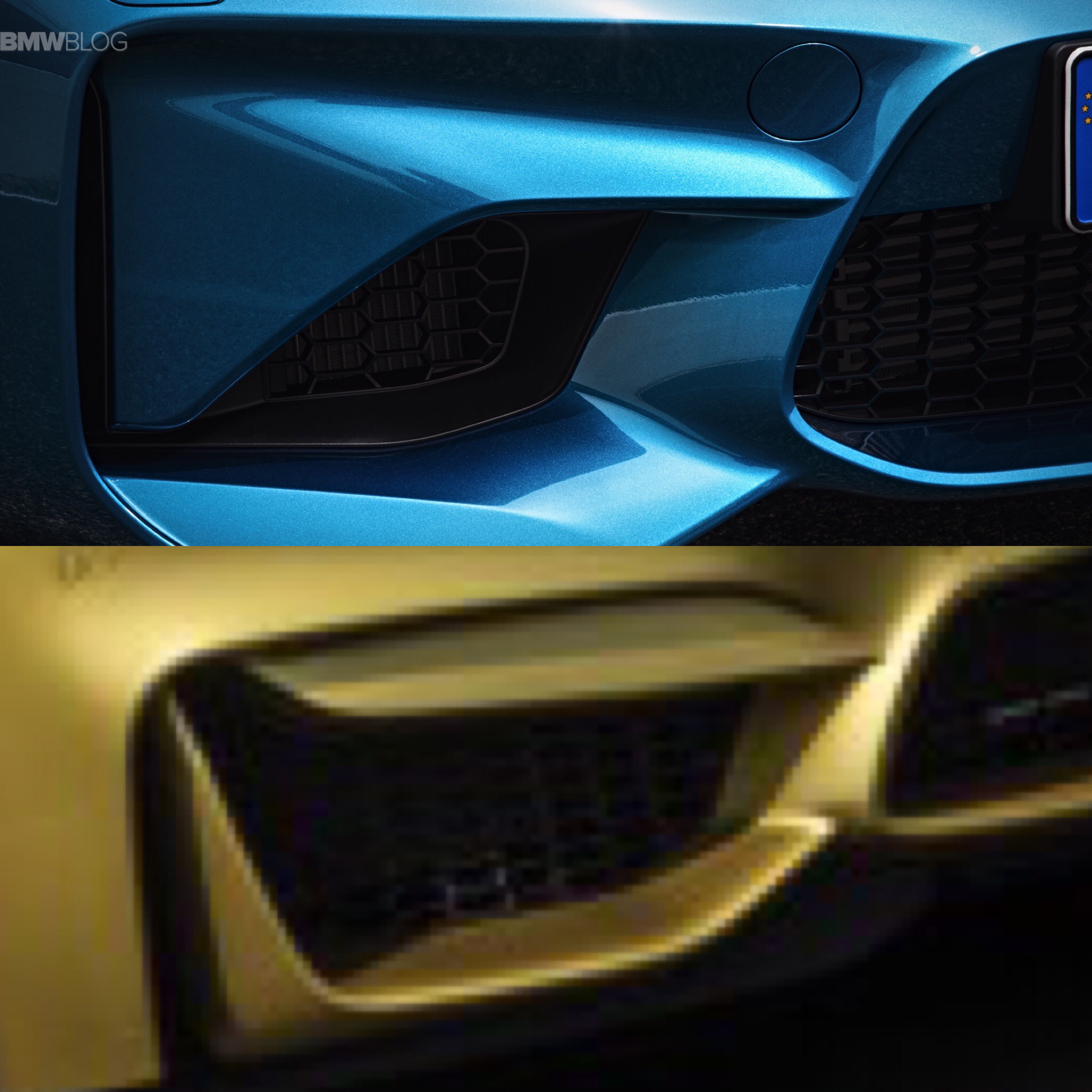 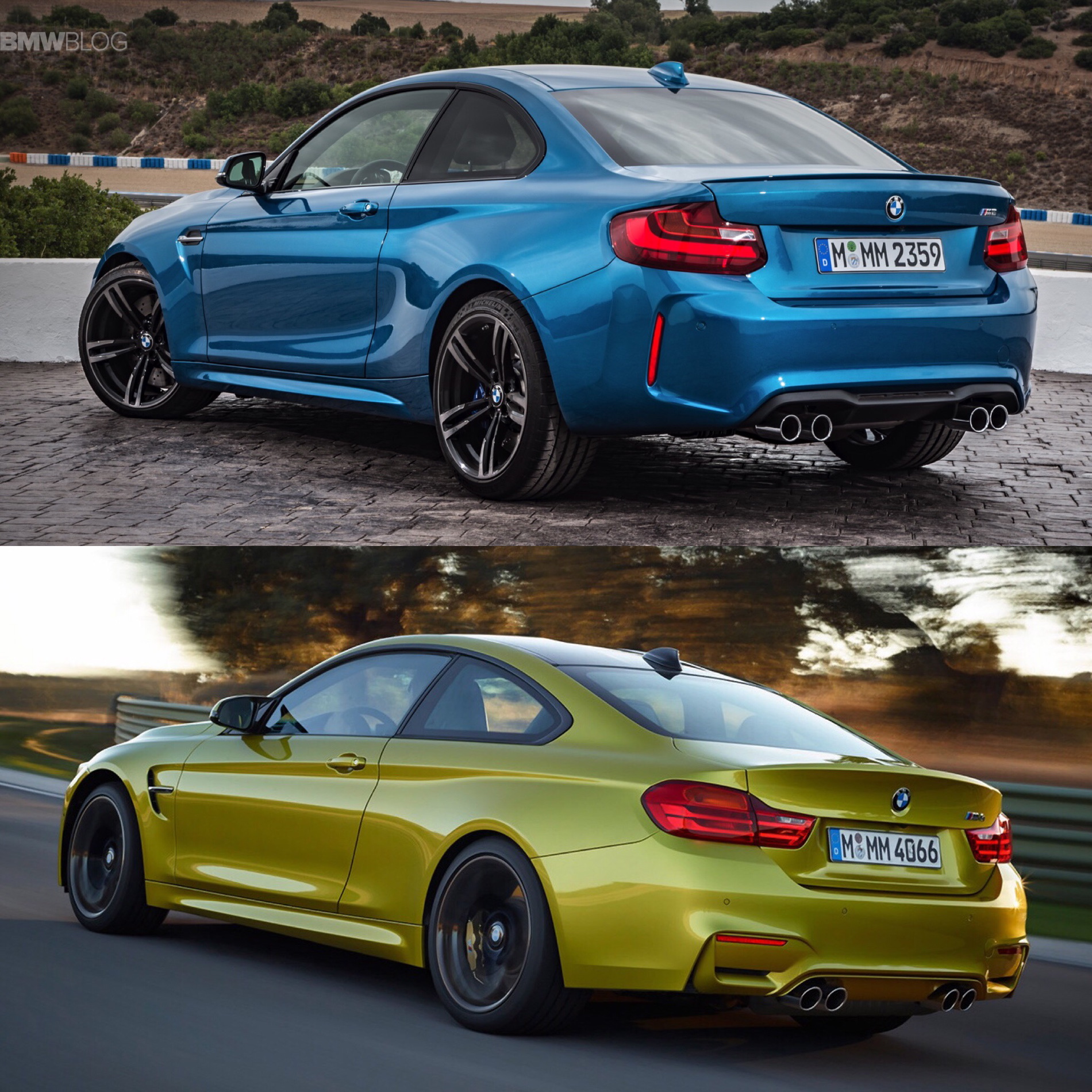 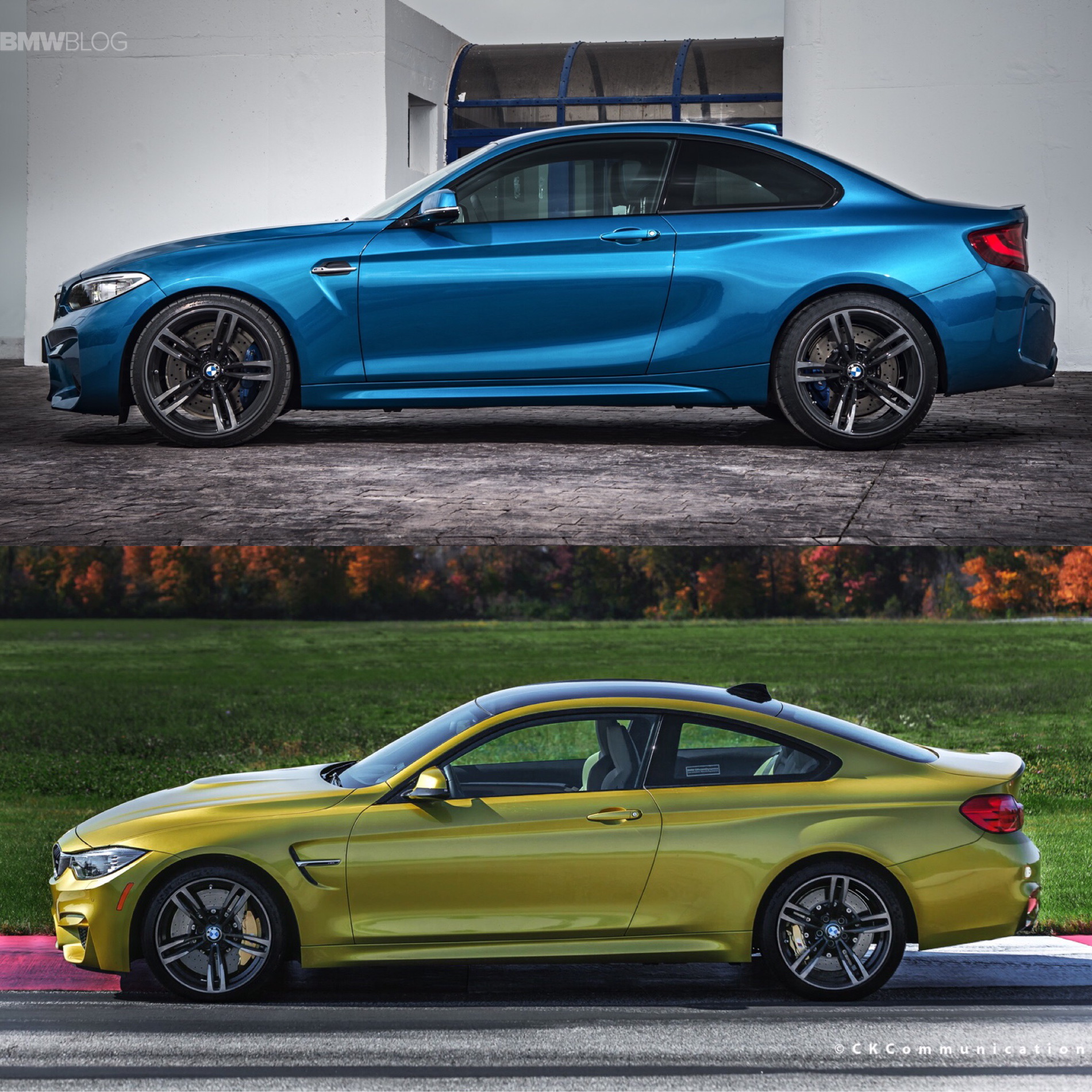 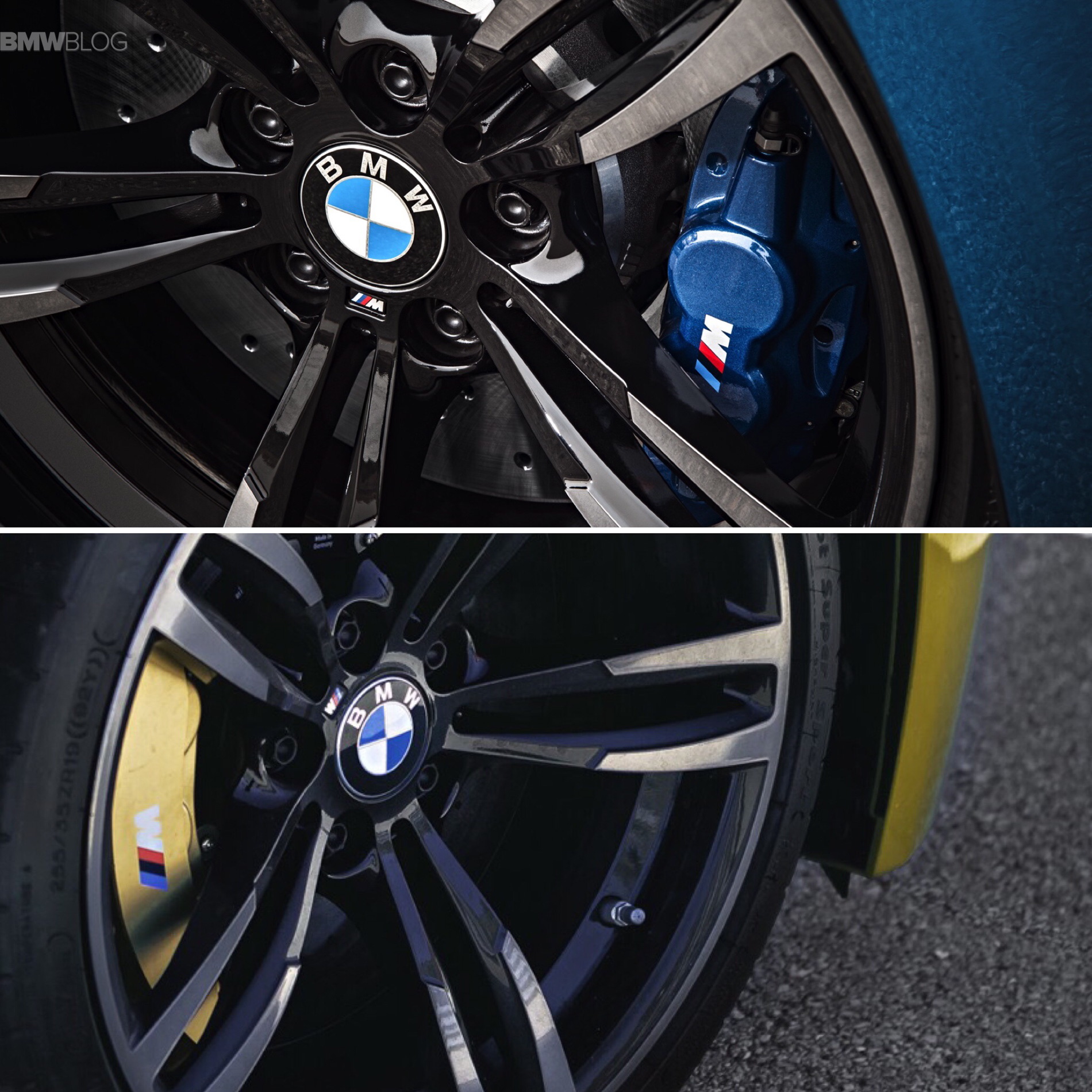 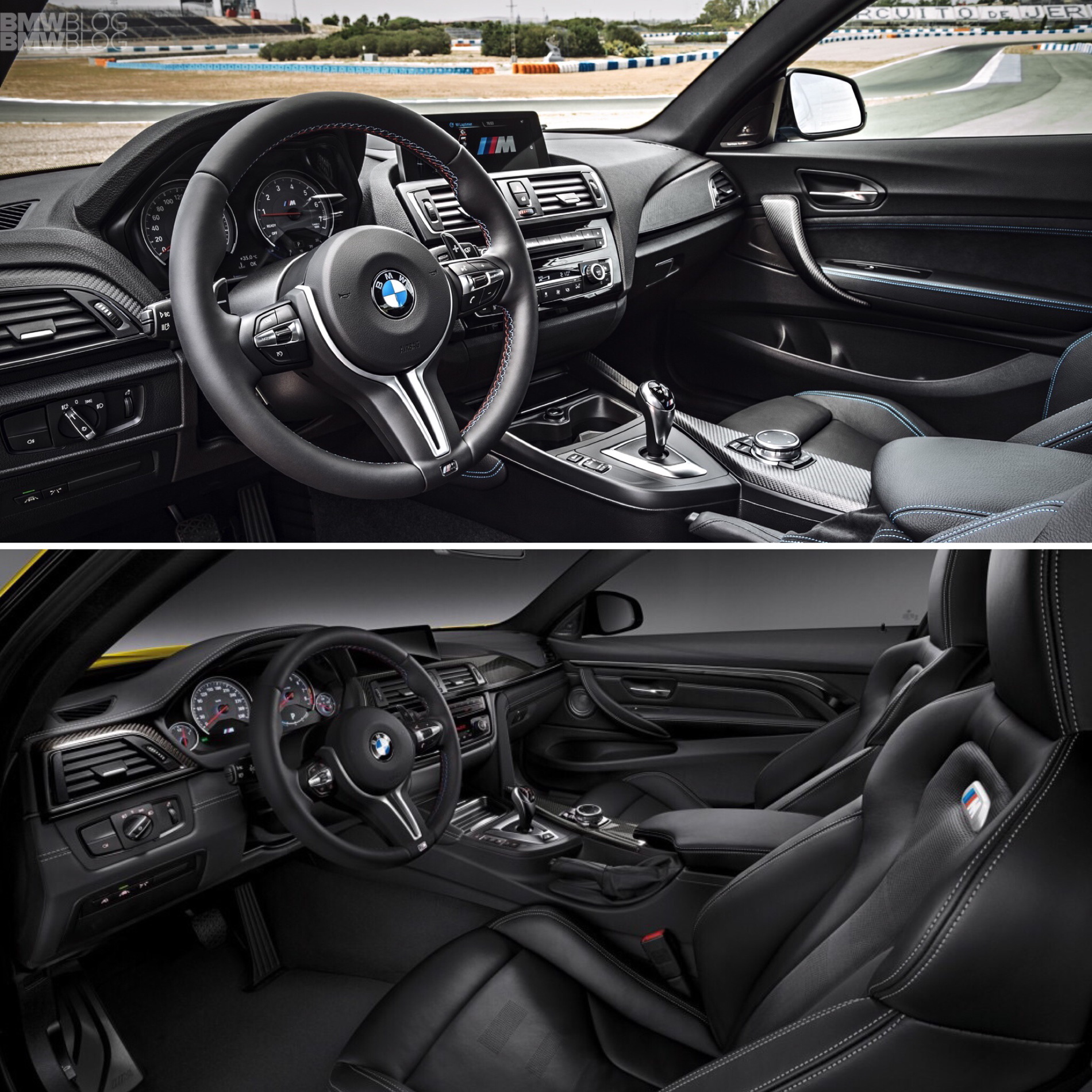 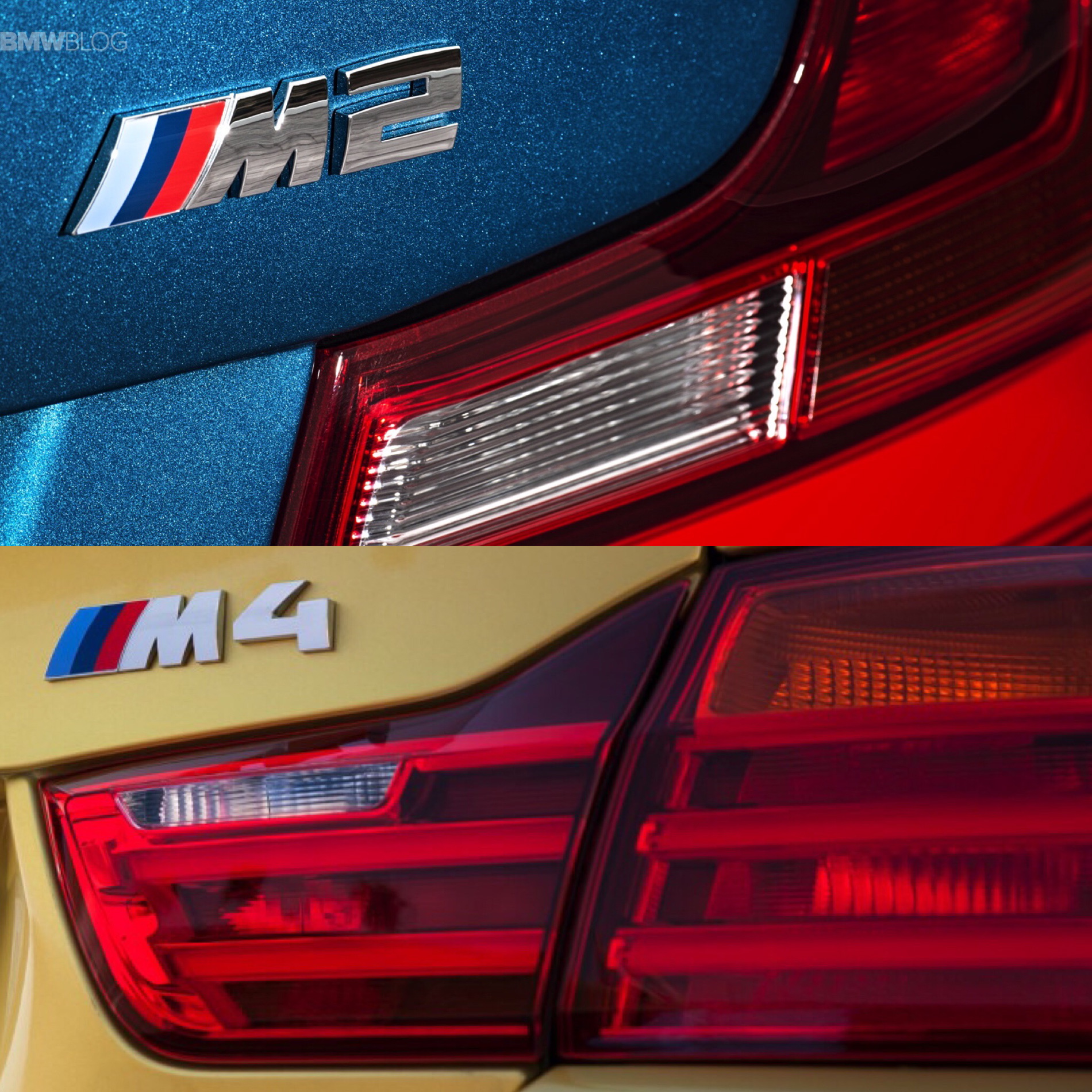 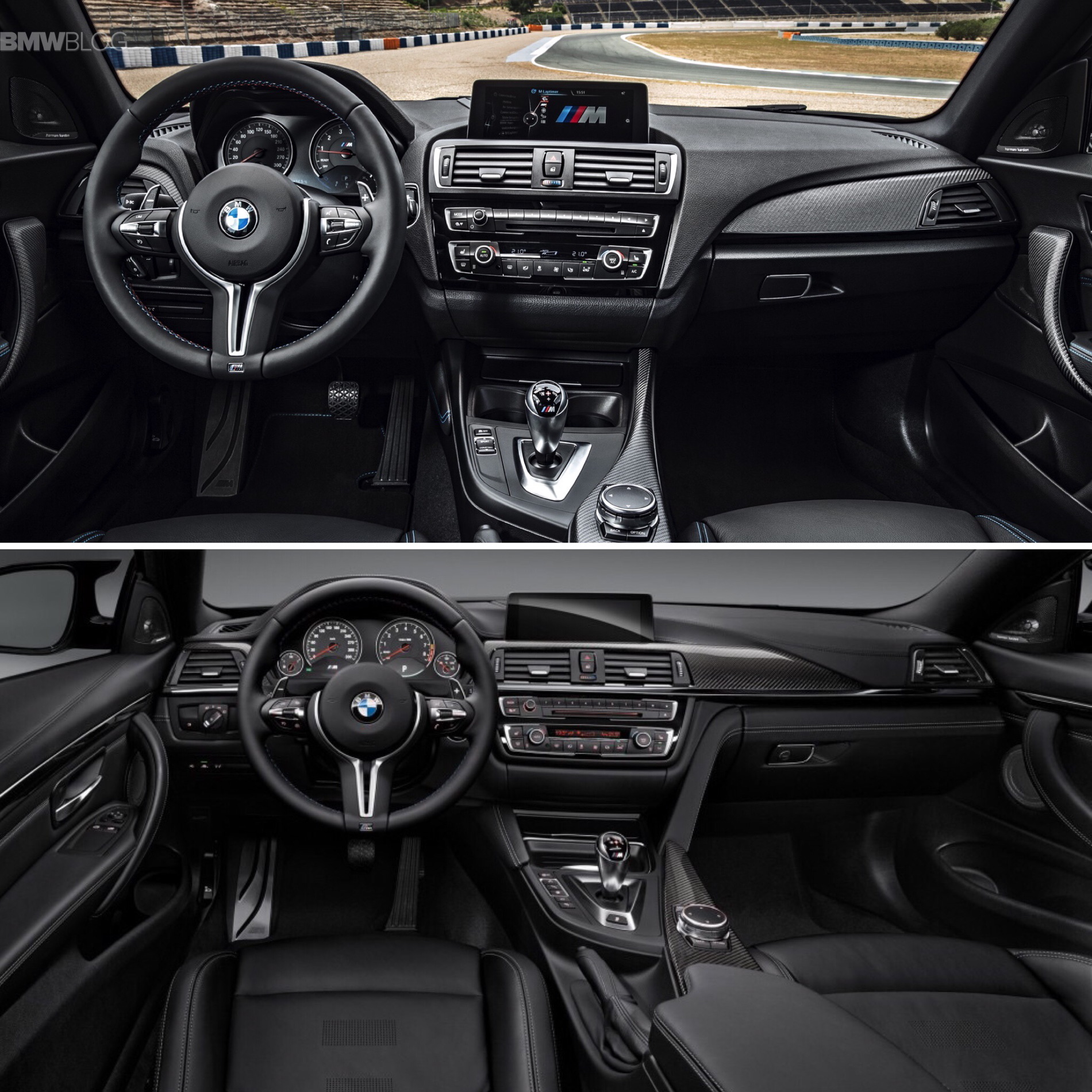 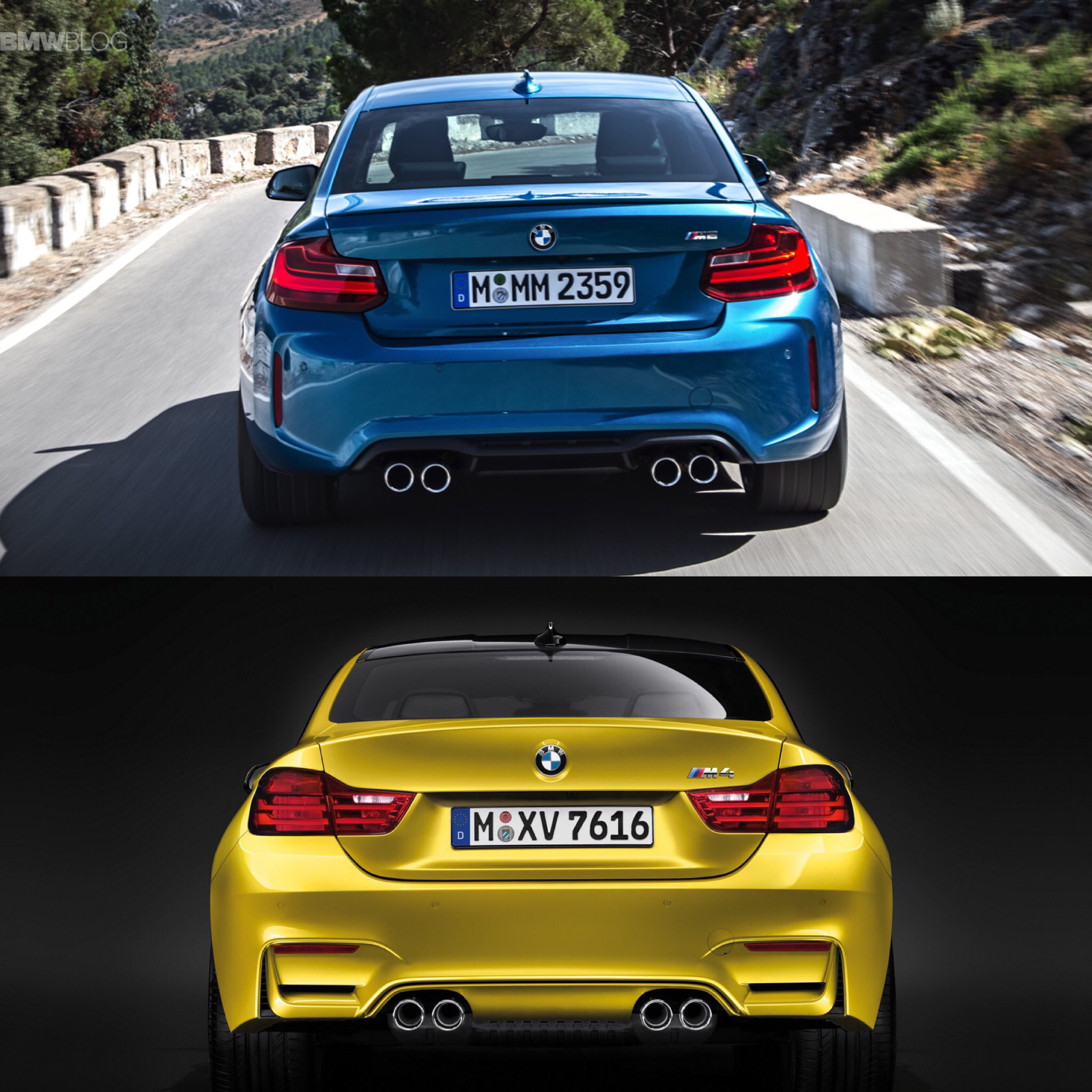