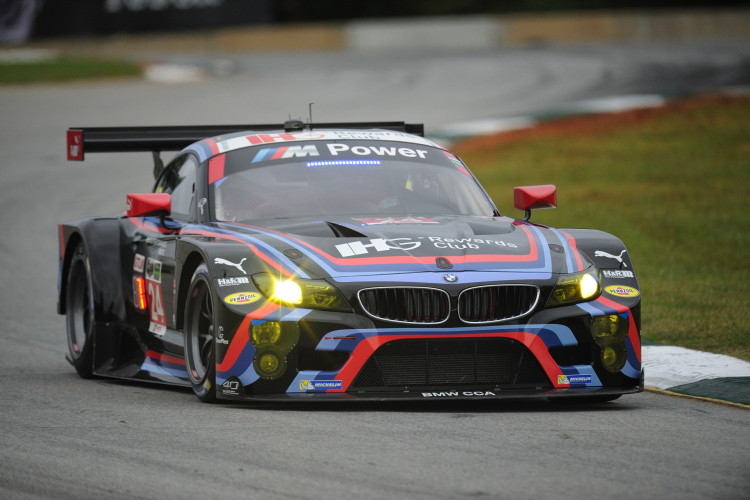 The 2015 United SportsCar Championship (USCC) came to an early end at Road Atlanta (US): At Petit Le Mans, which was called off two hours short of its scheduled ten hours due to bad weather conditions, John Edwards (US), Lucas Luhr (DE) and Jens Klingmann (DE) finished second in the GTLM class with the number 24 BMW Z4 GTLM. It was also P2 in the overall classification for the BMW trio. Car number 25, driven by Bill Auberlen (US), Dirk Werner (DE) and Augusto Farfus (BR), came fourth in the GTLM category. Porsche’s Nick Tandy (GB), Patrick Pilet (FR) and Richard Lietz (AT) secured victory at Road Atlanta (US). For the third time this season, the number 24 BMW Z4 GTLM won the DEKRA Green Challenge Award. 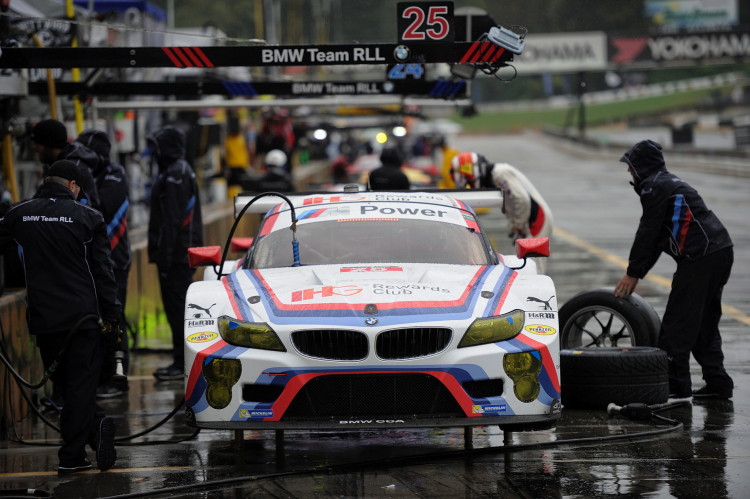 This meant that the BMW drivers narrowly missed out on the drivers’, team and manufacturer titles. Werner and Auberlen had been just three points behind the leaders going into the race. By winning at Petit Le Mans, Pilet won the 2015 drivers’ title, Werner/Auberlen finished second with 305 points – ten points behind the Frenchman. Edwards and Luhr concluded the season in fifth overall with 291 points. BMW Team RLL and BMW also finished second behind Porsche in the team and manufacturer classifications. 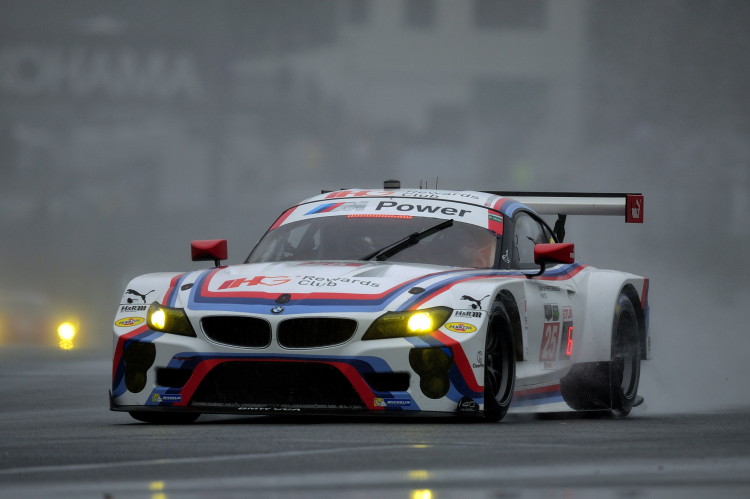 The iconic Petit Le Mans turned into the predicted water fight: When the race got underway at 11:10hrs local time, the track was already extremely wet due to the heavy rain. This made for tricky conditions. Several accidents caused full-course yellows, in which the USCC field was neutralised. Despite the terrible conditions, the BMW Team RLL drivers put in great performances without any mistakes, keeping their BMW Z4 GTLMs on track even in the heaviest periods of rain. Five hours and 22 minutes into the USCC season finale, however, the red flag was brought out due to bad track conditions. Another weather system bringing even heavier rain was visible on the radar, moving straight in the direction of Road Atlanta. After a one-hour break, the race was re-started. However, with darkness setting in, it was ultimately stopped for safety reasons at 19:01hrs local time – and the season came to an early end. 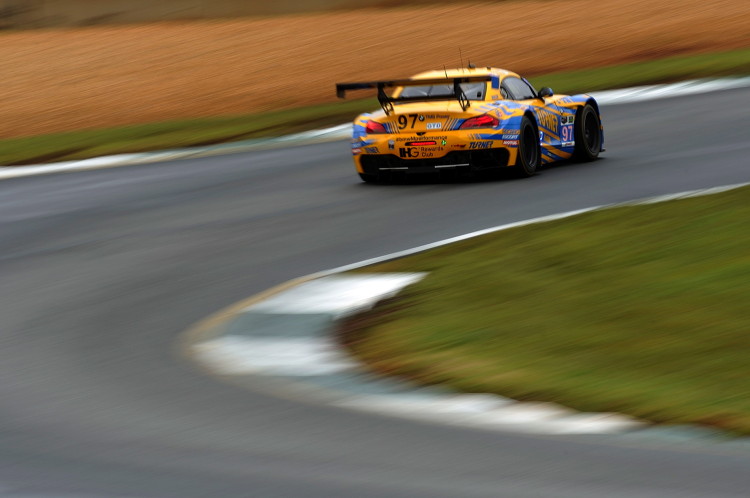 The season finale at Road Atlanta also marked the final race appearance of the BMW Z4 GTLM in America. In 2013 the car celebrated its debut in the American Le Mans Series (ALMS) and also proved to be a winner in the USCC. In total, BMW Team RLL scored eight pole positions, five wins – with three of them coming in the 2015 season at Long Beach (US), Laguna Seca (US) and Austin (US) – and 16 further podiums with this car. In 2016 the BMW Z4 GTLM is planned to be succeeded by the newly developed BMW M6 GTLM.

Next year there will be a total of 11 GTLM races in the series which will now be known as the IMSA WeatherTech SportsCar Championship. The season will kick off in Daytona (US) on 30th/31st January 2016.

Jens Marquardt (BMW Motorsport Director):
“This race was not for the faint-hearted. Although we scored a strong result here with P2 and P4, this wasn’t quite enough to win the drivers’ or the manufacturers’ titles. The rain made for partly chaotic conditions out on the track. At some point I just stopped counting the number of full-course yellows. Our drivers and the team did a flawless job, and kept in control throughout the race despite the difficult circumstances. However, we just couldn’t quite match the pace of the leading Porsche today. So we finish second in the drivers’, team and manufacturers’ championships. This is more than respectable for the BMW Z4 GTLM in its final season. If anyone had told me prior to the start of the season we would fight for the championship until the final race and win three races, I would have taken this straight away. I would like to say thank you to our drivers, BMW Team RLL and BMW of North America again for this great year. Today we will celebrate a fantastic season a bit, but from tomorrow it’s all about continuing our preparations for 2016 with the BMW M6 GTLM. It won’t be long until the start of the new season. Congratulations to Porsche on winning the titles.”

Bobby Rahal (Team Principal, BMW Team RLL):
“It was disappointing, especially if we had gone a few more laps and the Porsche had pitted, who knows what would have happened. Obviously the conditions were very tough for everybody. It is bad enough fighting the competition let alone mother nature. Anyway it was a good year for us, we won three races and are second in the championship. I think we have to be pleased with the year, although it is always disappointing when you get close to winning a championship and don’t get it done, but we will be back next year.”

Lucas Luhr (No. 24 BMW Z4 GTLM, 2nd place):
“It was a tough race for everybody today – for the drivers and the crews. It is a shame that the season had to end this way with a shortened race, but that’s racing. Congratulations to Porsche, they did a good job all year long and you are not going to win a championship if you don’t deserve it. We did everything, I think we can be proud of BMW, of our BMW Z4 GTLM and BMW Team RLL. We put on a hell of a fight and hopefully we can come back next year and then we can take the championship.”

John Edwards (No. 24 BMW Z4 GTLM, 2nd place):
“It was a really crazy day. It was disappointing to lose the manufacturers’ championship for BMW at the last race, but at the end of the day I don’t think we had anything on the Porsches. I was just trying to survive out there in my stint. Jens at the end did a magnificent job just staying on the circuit. There was no time the track dried out, and the showers caused hydroplaning. It wasn’t a fun day, but I am happy to end up with a podium.”

Jens Klingmann (No. 24 BMW Z4 GTLM, 2nd place):
“For me as a third driver supporting the team three times a year I didn’t know the track. It was a big challenge. I came into my rhythm quite easily and quickly and then it was just about surviving the race. There was so much aquaplaning and even in the last couple of laps I just tried to manage to keep the car on the track. I think it was the right decision to stop the race, although for us as BMW it was sad we lost the manufacturers’ title. I am still happy to have finished the race in P2 and am going to go home with a smile on my face.”

Bill Auberlen (No. 25 BMW Z4 GTLM, 4th place):
“We gave it our best and our best was fantastic. These guys excelled and maybe over excelled and kept us in a hunt we shouldn’t have been in. Everyone – BMW Motorsport, BMW Team RLL, Michelin – they kept us fighting for a championship and nobody ever gave up. In the end it was disappointing, but we can hold our heads up and congratulations to Porsche for winning the championship. I was not going to do anything crazy. No one made a mistake and none of our guys did that, which was great.”

Dirk Werner (No. 25 BMW Z4 GTLM, 4th place):
“Congratulations to Porsche first of all and to Patrick Pilet for winning the championship. They did a good race here so deserved it. The race was very difficult and not easy to stay on track. At times it was really crazy. I am happy we managed to get through this race, so thanks to the team and thanks to Augusto for supporting us. In the end with P2 in the championship we can be happy, as we had a great season with two wins and some podiums.”

Augusto Farfus (No. 25 BMW Z4 GTLM, 4th place):
“We were hanging out there with the leaders and we had a really good strategy for the end of the race, but then the chequered flag came out two hours early, which we were not prepared for. I was hoping to leave Petit Le Mans with a victory, but that didn’t happen. However, well done to the boys, we didn’t have the fastest package but we did a good job with what we had, and at the end we managed to bring the car home.”