At the BMW Group, the fourth Industrial Revolution has already begun: A project in the bumper production of the Landshut plant shows how the virtual and the real worlds can merge in everyday production procedures even today. Thanks to a non-contact gesture detection system, after bumpers have passed through the paint shop they now undergo an efficient and highly reliable quality control – via hand gestures.

Innovation from the gaming world.

Automated gesture detection has long been introduced in various industries, such as the gaming market: Holding a controller, we don’t think twice about playing bowling or golf right in our living rooms. 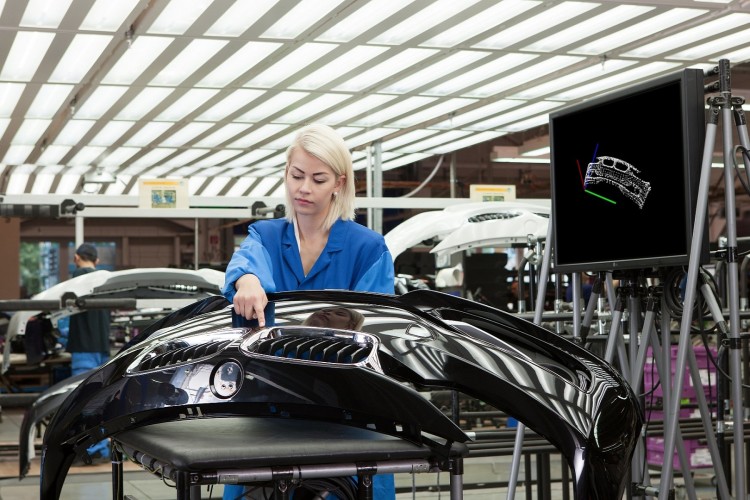 Proof of the fact that the application of camera-based gesture detection systems does not only make sense in the leisure segment but also in automotive production is provided by a pilot project at the BMW Group’s Landshut site, which applies the principle of gesture detection in its bumper production. Before bumpers are mounted, workers check the quality of the parts. In order to achieve a 100% quality level, each deviation from the target state is recorded in a system and evaluated. Previously, workers had to document the result for each component checked at a PC. This setup cost valuable time, especially in cases where the PC could not be mounted directly at the test bench and people had to walk to a different workstation to feed in the data. If several faults appeared at different positions at the same time, the documentation became more complex, with workers being required to remember several details very precisely.

Intelligent interaction of man and machine.
In cooperation with the Fraunhofer Institute in Karlsruhe, the BMW Group’s Landshut plant has worked on a solution and developed a program that detects and evaluates gestures. ‘The system recognizes the interaction between the person and the bumper,’ explains the BMW Group’s responsible project coordinator Ramona Tremmel. ‘A wiping motion across the component marks the bumper as flawless. If a worker points their finger at a faulty section of the bumper, however, cameras register this gesture.’ The program then evaluates it and stores the entry.

The gesture detection system is controlled via two 3D cameras each, which are mounted above the workplaces. They are fitted with sensors that radiate infrared light through a filter. This way, an invisible grid of points with fixed coordinates is beamed across the room. To this end, the 3D bumper model was stored on the system. ‘When a worker points to the bumper, the coordinates of certain points change because they are reflected by the hand,’ Tremmel describes. The system stores the data and evaluates it so that people do not have to leave their workplaces any more to evaluate the bumpers. ‘The required sensor technology is installed in such a way that the standard workflow is not affected,’ Tremmel states. Another advantage: Workers do not need additional devices such as special eyewear or microphones. The innovative system speeds up the test process; in addition, the data entry is extremely precise. According to Tremmel, ‘the workers have responded very positively to the new technology. The gesture interaction is simple and easy to understand and can be applied intuitively, without requiring extra training time. People do not have to walk to other workstations anymore and can concentrate better on their work.’ The pilot phase has been completed successfully; preparations for the application of the system in series production are now underway.

The BMW Group and Industry 4.0.
The BMW Group has a state-of-the-art production network that is developed further on a continuous basis. Some of the approaches summarized under the term Industry 4.0, which are currently the subject of public debate, have previously been introduced at the BMW Group or are in their rollout stage. ‘The BMW Group regards its workforce as the key to a lean production that is geared toward the customer benefit,’ comments Harald Krüger, Member of the Management Board of BMW AG, Production. ‘So for the BMW Group, Industry 4.0 does not mean a production without people, and also not necessarily increasing automation. On the contrary, this is about making reasonable use of new technology and networking opportunities in order to provide ideal support to people in production and support areas.’ Sophisticated human-robot systems can significantly improve ergonomically unfavourable work procedures. As the digital and the physical worlds grow closer together, new opportunities arise that allow people to cooperate more efficiently in the BMW Group’s international production network. Mobile assistance systems will offer improved support to production workers in the future. However, the focus is not on the technical feasibility, but on the specific benefit in production technologies that actually reach the end customer.

BMW Group Plant Landshut.
At the BMW Group’s Landshut site, approx. 3,500 people produce engine and chassis components from light metal castings, plastics components for the vehicle exterior, carbon-fiber car body components, cockpit and equipment scopes, electrical drive systems, special drivetrains, and drive shafts.
These components are delivered to all BMW Group vehicle and engine plants worldwide. As the BMW Group’s Center of Innovation and Production for the future technologies of lightweight construction and e-mobility, the Landshut plant is involved in the development of new vehicles at an early stage.