It’s supposed to be Americans who are constantly reinventing themselves. But, in fact, it is Germany that currently serves as a good example of progress. In many ways Germany is playing the role of good guy lately. They’re propping up the European economy, holding the EU together with their commitment to a unified continent, and they’re doing their part and more in terms of global climate change.

The human population of the planet is simply dumping way too much CO2 into the atmosphere, warming the planet, which could lead to cataclysmic climate change in the middle and latter part of this century and something needs to be done. Germany is doing it. The country is currently undergoing an energy revolution the likes of which, sadly, isn’t happening elsewhere. Germany now leads the world in renewable energy generation, with over 20 percent of its needs being met by sustainable and non-CO2 emitting sources. Also, Germany’s share of electricity coming from renewables such as wind and solar is already an impressive 25 percent.

Germany has proven that making the change to renewable sources of energy is not costly or a burden to the economy. In fact, it’s quite the opposite, with clean energy production accounting for around 400,000 jobs in the country, the revolution being a part ofGermany’s continued economic prosperity.

There is a conscientiousness among the Germans these days about many of the world’s problems, a humanitarian streak in the culture that is evident to any observer, which is also reflected in the executives and engineers we meet from BMW. Sure, much of it what they say is feel-good, corporate-speak that comes from the marketing departments, but still, there is a palpable sense that BMW is dedicated to solving the emissions problem. They don’t do it grudgingly or roll their eyes at government regulations. They acknowledge the problem and their responsibility towards devising solutions.

Maybe Germany is different. It’s a transformed country that’s used to change. But the good news about climate change is that we are not stuck in a bad situation without solutions. There are readily available alternatives to the burning of fossil fuels for our energy needs. What is lacking is the political will to bring about that transformation to renewable energy sources and the German energy revolution can serve as a model for the rest of us.

Which brings us to the new i3 – BMW’s first all-electric (EV) car.

The i3 comes with high expectations, as BMW hopes to make it a more than just a small-volume, niche vehicle. So, I went to Amsterdam, where BMW was introducing the i3 to journalists from all over the world, ready for an electric car, ready to judge it on its own merits and refusing to compare it to a standard internal-combustion automobile. The mass market may not yet be ready for electric cars, but I certainly was.

Driving around lately, even in my very efficient diesel, I keep asking myself what am I still doing with this old, carbon-based technology? Everywhere else we are surrounded by new tech – smartphones and tablets and HD televisions screens are ubiquitous. But we still power our automobiles with a technology that is almost a century and a half old. It pollutes (look at the smog situation in some Chinese cities) and is an accessory to the warming of the planet and the acidification of the oceans to an alarming degree.

If we were introducing the automobile today, an electric car would be considered one of the most brilliant of human inventions and would be met with unmitigated praise. Unfortunately, that isn’t the case. Again, I won’t be making the silly point that the i3 can’t match the range of gasoline or diesel-powered cars. I came looking for an electric car to impress me and the i3 certainly did.

The BMW i3 is quite an original feat of engineering. It is one of the few electric cars built from scratch, and driving it you immediately notice the advantages of that. The CFRP chassis is light and flexible and holds the car together on tight turns. Riding in the i3, a new feeling emerges in me. This is the new, the modern, the kind of technology we’ve imagined to be part of some distant, sci-fi-like future in the popular imagination. The i3 feels ambitious, you can tell BMW is aiming for it to be the best electric car on the market, but it meets that ambition with the quality of its engineering.

The design of the car, both in an out, represents the new paradigm in mobility BMW is trying to create with this car. It’s both utterly original and classic BMW at the same time. It’s certainly one of the better looking electric vehicles around which may sound like a backhanded compliment, although it isn’t. The Tesla Model S is a great looking car too period. The i3 looks like a city mover but one with style and a touch of flair too and it makes the other cars on the road look old.

Before you sit yourself down behind the wheel of an EV you think that you’re going to miss the rush of a revving engine and the chug of a good gear shift. But when you drive one you realize you don’t need those things at all. In fact, they just get in the way. Again, that’s all old tech. The i3’s simple drivetrain, with the full 250 Nm of torque available right off the line, is simple and sublime. Acceleration provides a muted rush that doesn’t take much getting used to to enjoy.

The i3 is powered by 125 kW/170 hp electric motor driving the rear wheels that takes the car from 0 to 100 km/h in 7.2 seconds. That’s certainly quick enough, especially for a vehicle meant mainly for urban driving. Weight is a leafy 1,270 kg (2,799lb) which also provides for less tossing in corners. Steering is tight and responsive and handling is superb considering you’re riding on pretty thin tires in order to conserve energy.

On our drive through the Dutch countryside outside of Amsterdam (meeting also with the theme-appropriate windmills) the car made for a pretty good highway cruiser too – quiet and with a smooth, comfortable ride. Range was plenty to get us through our little tour, with the 22kWh lithium-ion battery able to power the i3 for up to 160 km (100 miles) on a single charge. But the smart navigation system kept pointing out charging stations to us along the way. As more of those charging points emerge and we build an infrastructure for EVs comparable to what exists for fuel-powered automobiles, hopefully that silly phrase ‘range-anxiety’ will be done with.

Top speed on the i3 is limited to 150 km/h, which definitely sufficed for those stretches on the Netherlands autobahns where we battle traffic most of the time anyway. But cruising at highway speeds didn’t seem to drain the battery too quickly for us.

No transmission shifts? Well, there’s no need for them and the uninterrupted acceleration that’s all torque was refreshing. The i3 exploits the advantages of an EV to their fullest potential and this is still a rear-drive BMW that has the ‘Fahrvergnügen’ that the brand has always promised and steadily delivers. Forget what the car stands for, it was a brilliant drive anyway. 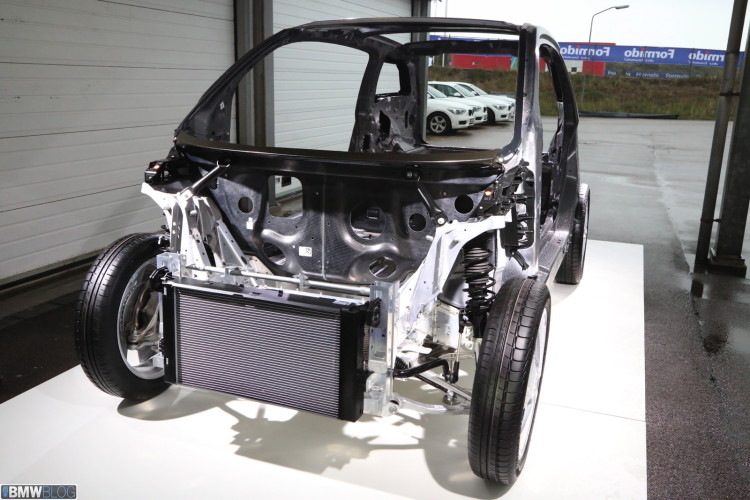 Going Green All The Way

How green is the i3? Well, the car is produced at BMW’s Leipzig plant where the automaker recently installed four Nordex wind turbines that provide enough energy to build the i3 (as well as the i8). Even the CFRP, made in Moses Lake, Washington State, gets its juice from a hydro-electric power plant which makes the i3 a clean purchase all around.

This car is exciting. It makes a statement but it’s more than that. It’s a new technology that should be embraced and must be embraced. It’s a premium car that you can bank on – dependable, easy to service (no need for oil changes) and inexpensive to run. Remember, electricity comes in far cheaper than fuel and BMW estimates the cost of ownership to be about 33 percent less (in Europe) for the i3 with regard to a comparable diesel-powered car such as the 118d.

Can it replace the convenience of your current family car? Not yet. But it’s getting there. Again, let’s leave out the comparisons to combustion-engined cars. This car isn’t emitting an iota of CO2 from the tailpipe and is still zero emissions when using green energy. It’s a perfect commuter car. For those of you waiting for an EV that is mature and ready to deliver on its promise – the i3 is it.