ElectroDriver YouTube channel captured on video the chasing of a BMW i8 while aboard a Tesla Model S car.

The Model S is the second vehicle to emerge from the Tesla production lines and has been already receiving accolades from major car magazines including Motor Trends 2013 Car of The Year, Automobile Magazines 2013 Automobile of The Year and Consumer Reports recently awarded it the highest score of any car they have ever tested.

The chased car is the 2014 BMW i8, the hybrid sportscar to emerge under the “i” division and the second model after the i3. TThe plugin hybrid will come to market in Spring 2014 and is powered by a turbocharged three-cylinder petrol engine with 224 horsepower, aided by a 96 kW electric motor. 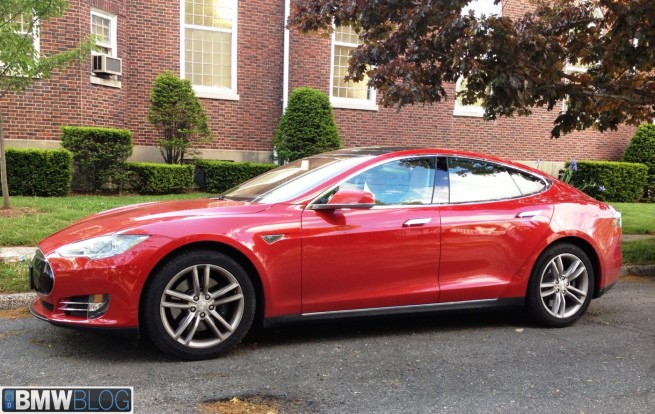 Together, the two motors provide a system output of 260 kW or 354 horsepower, enabling acceleration from 0 to 100 km/h in 4.6 seconds. It can go from a front-wheel drive vehicle to a rear-wheel drive one, and even an all-wheel drive setup. In full electric mode, the BMW i8 can travel up to 20 miles.

We have recently tested the 85kWh Tesla Model S.

5 responses to “Video: Tesla Model S chasing a BMW i8”