Manhart racing unveils the MH1 S Biturbo, a tuning program based on the BMW 1 Series M Coupe. The tuning kit includes upgrades to both the design of the car and power output. Using a new air guide with a carbon airbox and custom downpipes, along with ECU remapping, the MH1 S Biturbo now output 465 horsepower, or 125 more ponies than the standard model.

Upgrades to the exterior body include a custom  MHR front spoiler, carbon motor cowl and trunk lid, and a redesigned diffuser. The car sits on 9×20 front wheels with Continental Sport Contact 5P 245/30 ZR20 tires and the 10.5×20 rear wheels wrapped around in 295/25 ZR20 high performance tires.

Inside, the standard seats are out and the BMW Performance ones are in. To display more relevant information to the driver, Manhart installed an additional MHR display. 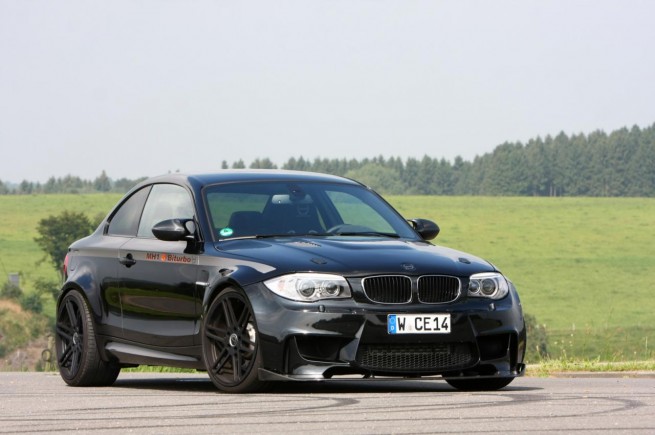 Here is a photo gallery, along with the full press release. 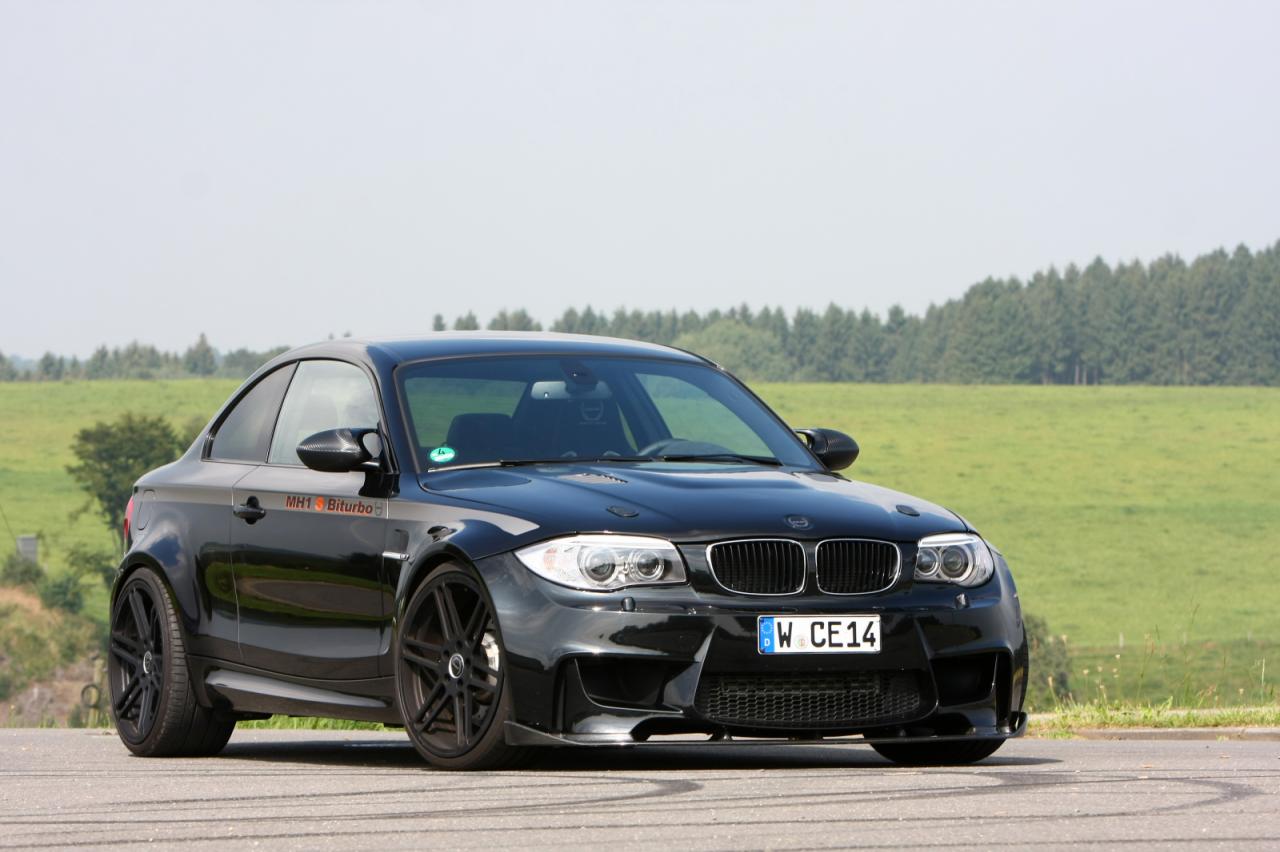 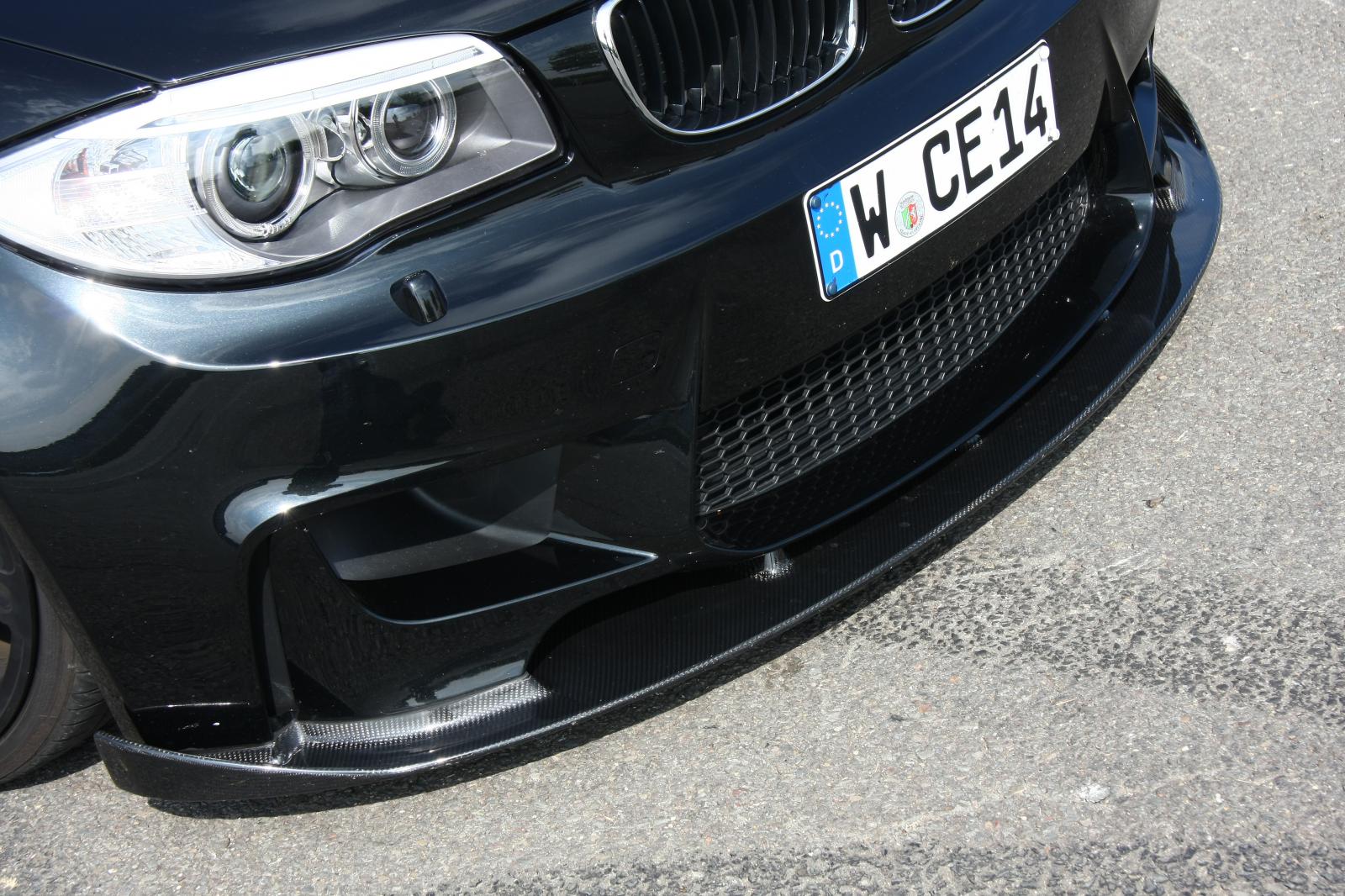 For nearly three decades, the name of Manhart Racing has been inseparably connected with the subject of motor tuning. Spectacular technology transplantations such as the V10-motor transplant from the M5 into the BMW Z4 or the Biturbo-V8 drive from the X6 M into the BMW M3 have essentially characterised the performance scene. Manhart Racing has recently changed its management and relocated its office rooms from Geilenkirchen to Wuppertal. The company’s genes, however, have not changed. At Manhart Racing, the focus is always on performance!

The latest creations of this company include the performance conversion of a BMW 1M Coupé, known after the transformation by the promising abbreviation “MH1 S Biturbo”. The main focus once again was on considerably increasing the serial six-piston engine’s performance by biturbo charging. The first measure was optimising the factory-side motor software. Added to this was a completely new air guide incl. carbon airbox and new downpipes. For the unit to always work in a healthy temperature range under this forced additional output, the technicians of Manhart Racing also installed a large charging air cooler and a larger water cooler. The end result is an overall output of 465 hp and a maximum torque of 600 Newtonmetres, leading to an added output of a full 125 hp!

The resulting driving experience is impressive! The slightest touch of the throttle pedal is converted into direct forward thrust no matter the gear and the rotating speed . The output develops nearly linear, the speed hand is nearly as fast as the rotating speed and the MH1 S Biturbo accelerates his driver lighting-fast to give him the absolute thrill of speed.

To ensure that the MH1 S Biturbo is not only faster than its serial counterpart on straight roads, however, the Manhart technicians installed an additional KW Clubsport-chassis with special Manhart Racing alignment. The super-light MHR Concave One forged wheels rotate in the wheel housings of the MH1 S Biturbo; in size 9×20 in the front and 10.5×20 inch in the back, applied with Continental Sport Contact 5P-high-performance tyres in 245/30 ZR20 and 295/25 ZR20.

In addition to the performance conversions, Manhart Racing gave the 1 M-Coupé some visual improvements as well: A special MHR front spoiler ensures a little more output on the front axle. The MHR motor cowl and the MHR trunk lid of light-weight carbon reduce the car’s weight and a MHR tail diffuser leads to a little more output on the rear axle. The mirror caps are carbon as well.

Manhart Racing improved the interior with a set of BMW performance seats with embroidered MHR-logo and the known MHR additional display, onto which all important data, such as the maximum torque used, all motor temperatures and even acceleration values, etc. can be read on the push of a button.