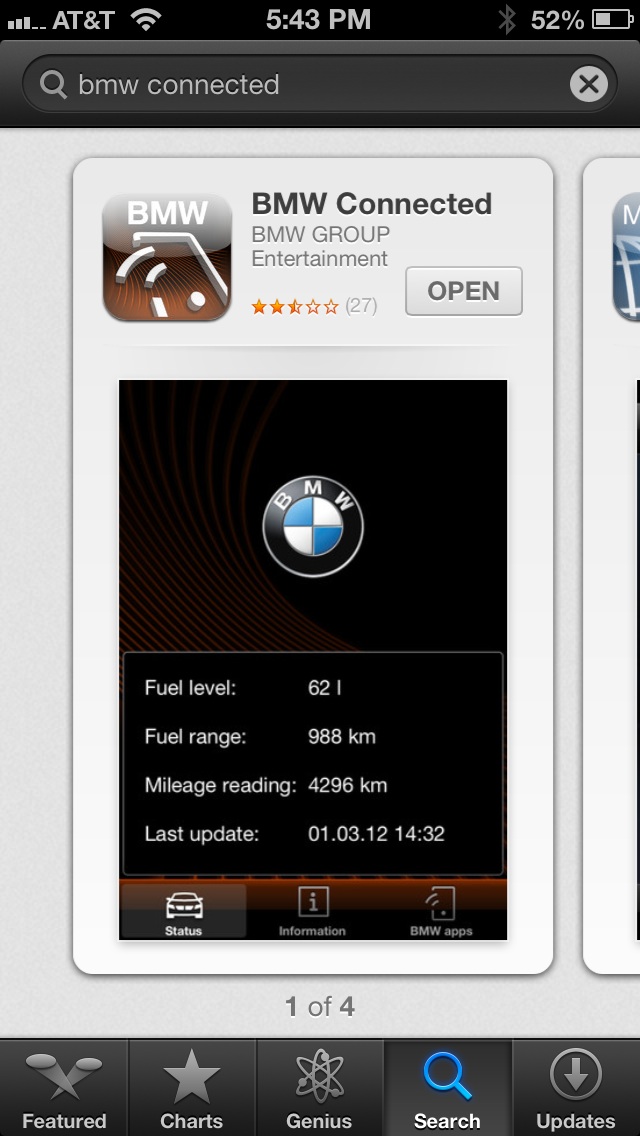 When I heard the new iPhone 5 was going to have a “Lightning connector” instead of Apple’s ubiquitous 30-pin adapter, I wondered if this new, gotta have it, iPhone 5 would even work with BMW Apps? After all, Apple’s own website says a Lightning to 30-pin Adapter will not support video output. I thought, “Cupertino we have problem.”

After BMWBLOG’s own testing however, I am happy to report the iPhone 5 is fully functional with BMW Apps, including graphics displayed while using the iPod function for music media and graphics display perfectly for Pandora, Facebook and Twitter. The iPhone 5 will not fit in the $250 snap-in adapter so at this point there is no support for stationary video. Apple’s Lightning-to-30-pin adapter does not support video output so we’ll have to wait to see if BMW makes a new snap-in adapter for the iPhone 5. To get the iPhone 5 connected to your BMW you need to use the Lightning-to-USB cable into the USB plug.

If you’re not familiar with BMW Apps, it is option code 6NR and has been available for $250 on BMWs with iDrive since March of 2011 production. One of the best in the business automotive interfaces for smartphones, it provides integration of your BMW’s iDrive with Facebook, Twitter, and streaming music from web radio, Pandora and MOG, as well as other apps like Yelp. BMW apps only work with the iPhone, though BMW is said to be working on an Android application that will be ready July 2013. BMW Apps currently works with iPhone 3GS, 4, 4S, and thankfully the new iPhone 5.

BMWBLOG was recently asked by a reader, Richard, for some help with using BMW Apps. “I’m enormously confused by the numerous BMW apps and app integration options peppered throughout the new iDrive. BMW Connected adds some capabilities with some apps (Twitter/Facebook), Pandora is somehow BMW-enabled, BMW Remote gives you control options, and somehow apps like Yelp can be integrated, too.”

Well, Richard, I agree it can be rather confounding to get the BMW ConnectedDrive and/or apps started. However, once you get it going and your accounts are configured properly, it’s pretty sweet. Having used it for a while now I have only a few remaining gripes. I do still remember the first time I tried to use it and was seriously lost. Learning the system takes full concentration so make sure your parked.

Keep in mind that BMW gives you an 8-page manual for BMW Connected, and seven, yes  7-pages of Frequently Asked Questions.

However, I’ll try my spin on it in a much more condensed fashion, but if it’s not enough detail for you, click the link for the manual.

So, here’s my how to get started. Please note, the first two steps are homework to do before getting in your BMW: 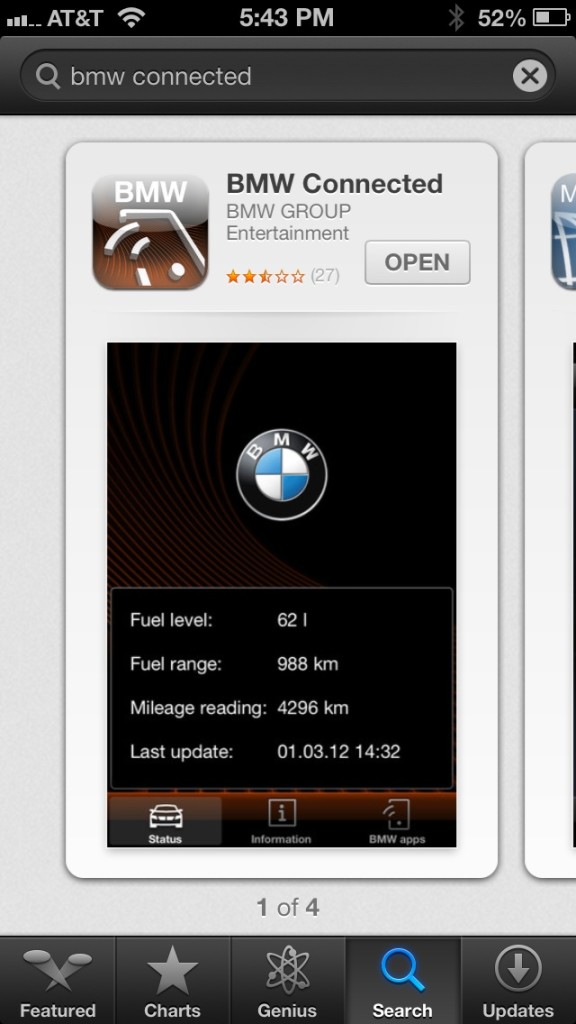 3. Plug in the iPhone in via a USB cable or the $250 now outdated snap-in adapter.

For the iPhone 5 you will need a Lightning-to-USB Cable plugged into your BMW’s USB port.

4. On your iPhone launch BMW Connected App. Put phone down for now.

5. On the main menu of iDrive choose ConnectedDrive and depress.

Scroll down until you see Apps – listed just below service status and PlugIn and depress.

Now you may ask, where in the world is your streaming music from Pandora or MOG? Well, BMW tells me that these are third-party apps, so thus they have to follow the third-party rules. And in this case it means Pandora and MOG must be manually launched when you want to use them. Yes this means you must grab your iPhone again and manually select Pandora or MOG and launch it. Once launched however, they are readily controlled via the iDrive controller. Pandora gives you full access to your stations, lets you create new stations and even rate or skip songs.

BMW AG has a pretty decent series of four videos that also help explain BMW Apps function and how to use and set them up.

Most of the proprietary apps are self-explanatory such as Web Radio. Web radio works even if you are not plugged into the BMW and gives you audio quality options to help limit your download data. These range in audio quality from 32 kbps to 128 kbps. Given the insane speed of the new iPhone 5 and my grandfathered unlimited data clause I like the 128 kbps, but beware if you are limited on data, it can add up fast.

Last Mile though, took me a while before I figured out. Perhaps its best feature is that it can locate where you parked even if it’s miles away, and show you on a map how to get back to the car. EcoPro is not bad but MINI’s version of the same thing gives you a fish-in-a-bowl graphical presentation and is just a riot. MINI’s fish sloshes around if you accelerate or brake hard. When you drive easy the fish is happy and not being thrown around. The BMW ECOPro Analyser for BMW uses stars and waves. More stars and smoother waves, you are doing more fuel efficient driving. It’s not really for me, maybe others may like it.

Criticisms of BMW Apps? Not many, other than the fact that you must physically connect your iPhone to your BMW as it doesn’t work through Bluetooth. Once done with that, you have to manually launch the BMW Connected app and then manually launch Pandora or MOG on top of this.

Want Yelp functionality? You have to pay an additional $199 yearly for BMW Online services to get it to work.

Lastly, there’s no retrofit. To date, this has to be a factory installed option and hasn’t been able to retrofitted after production.

Android platform isn’t supported though is supposed to be available July of 2013.

As BMW Apps is only $250 and unable to be retrofitted, I think it’s criminal that is not standard with iDrive. BMW Apps provides a unique experience in modern automobiles in staying connected while being mobile. It also allows the driver to use an iPhone to upgrade the capabilities of the iDrive without having to go to the dealer.