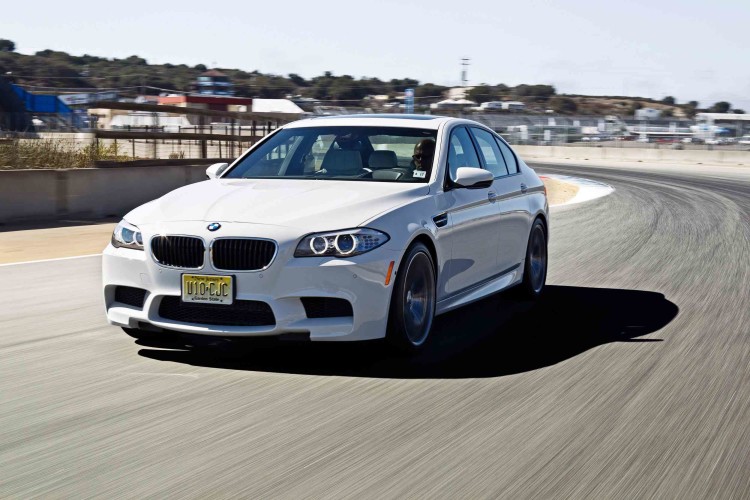 2013 BMW M5 Manual. Those words go together like a few other familiar duets: horse and carriage, peas and pod, red and Ferrari, liar and lawyer. They just look right, somehow, beside each other. The first three generations of M5 were available with nothing but hand selected gears; the latest is rarely delivered with such homage to tradition. Times and tastes, it seems, have moved on.

We flew to California to determine what makes for the best M5: semi-auto or hand selected gear change. Our verdict may lift eyebrows.

It all felt so familiar, slipping in behind the wheel of BMW’s M5. Several months had passed since our exploits on Spanish roads and raceway, but the nostalgia had not burned off. Indeed, the M5 is a very special car – one that grows on you and slips an arm around your shoulder. It befriends you and says, “we can have some fun together,” but you notice one eyebrow slightly lifted and a mischievous tone. Did I mention it’s a decidedly sexy voice? Yes, the M5 is that kind of friend. 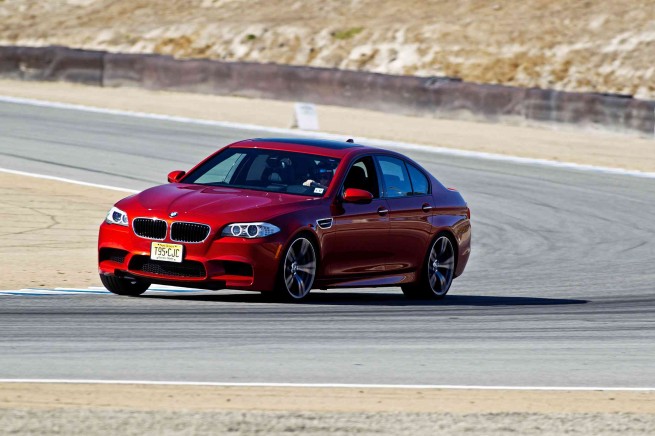 It was up to its old tricks once I got behind the wheel in the parking lot at Laguna Seca raceway. The same sexy voice, the same exotic persona. I’m not complaining. I first drove the manual M5 on the street, but let’s skip to the track and come back to the pedestrian bits later.

Walking up to the M5, you are always cognizant of its size. It really does cast a huge shadow – now larger in dimension than several previous generation 7 series sedans. Once behind the wheel, the car feels a bit smaller, but looking out over the hood and through your mirrors, it still feels large. Press the start button with your left foot deep in the clutch and the engine fires up, settling to a semi-audible hum. The stick slots into first gear with a pleasantly notchy yet well-oiled resistance, and we’re off up pit lane.

Of course, the handling and dynamics are identical between the manual and dual-clutch equipped cars (dual clutch transmission or “DCT” for short), save for slightly longer shift times and very modest weight savings, of course. So I’ll dwell on the difference in feeling and persona rather than outright performance, which we’ve comprehensively considered in our race track review from Ascari race circuit in Spain. 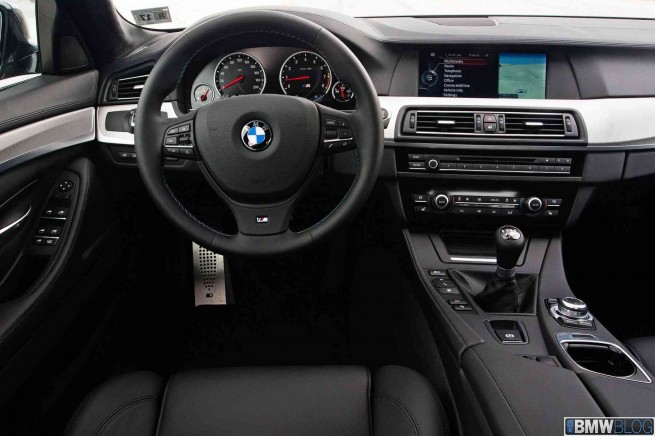 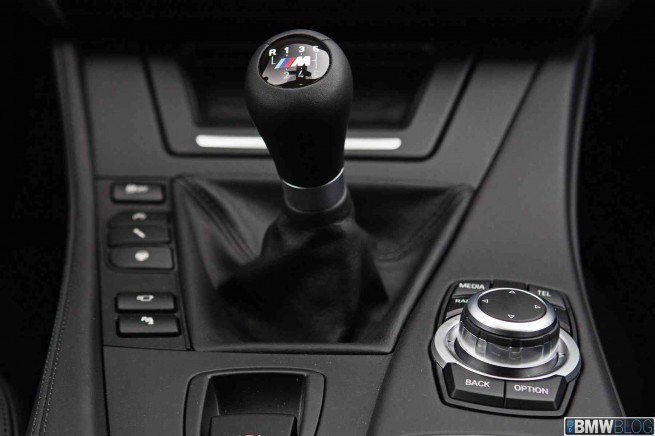 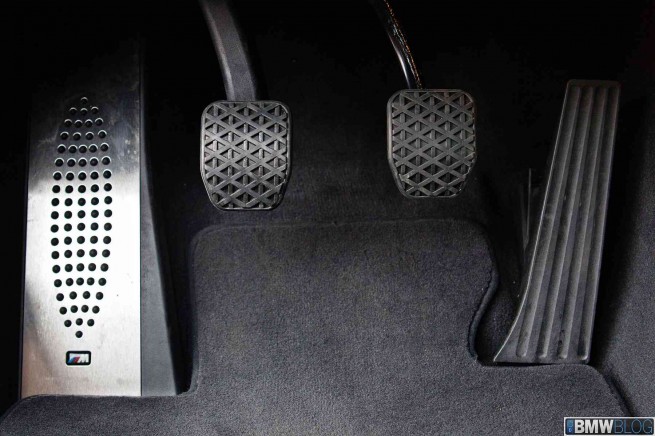 The DCT equipped M5 shrinks around you the moment you unleash it, shrinking further and further around you as you continue to lap, until it seems you’re in the cockpit of an M3. The manual M5 takes this illusion to David Copperfield levels. Focus on your line, dial in more throttle, more brakes, more apex speed, and soon you’ll feel like you’re piloting a 1M. The extra driver involvement brings back the old-time romance, the gentleman’s racer, the gratification of nailing a fast lap with all four limbs in play.

This is not to say that the DCT equipped M5 is not romantic – it still dances with you through corners, but the manual M5 puts on some Frank Sinatra and pours a glass of champagne.

The six-speed manual is precise and pleasantly notchy through all six cogs, the shift throw feels good, and the ratios feel about right – each of them making the most of the M5’s massive power. Clutch resistance is light to my taste, particularly in a car of such sporting intentions – but when turning in quick laps, you quickly forget about such tactile tastes and get on with the job using what you’ve got. It works, and well. 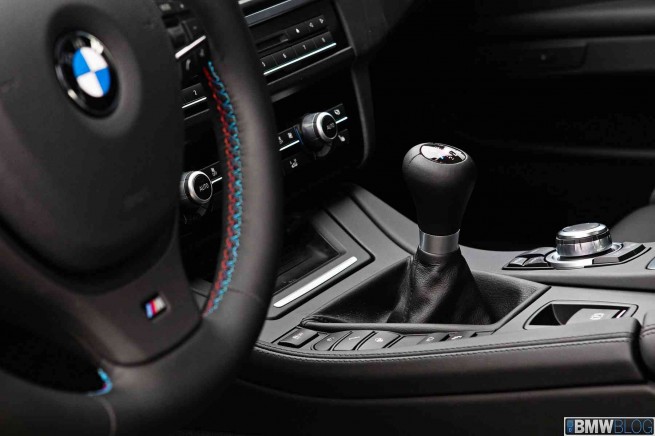 Of significant importance: the pedals are placed perfectly for heel-and-toe downshifts – you can heel-and-toe all day long without spraining a hip. Special mention goes to BMW’s standard floor-hinged throttle pedal – it makes quick work of a throttle blip with great ergonomics.

A funny thing happened exiting Laguna Seca’s final turn: I threw the car in and caught the slide, drifting to the exit – but after redlining second gear and grabbing third, I found myself with the tail back in line. I missed the simple drift-extending ease of a DCT upshift mid-slide, hence the manual M5 proved itself a little less of a hooligan – at least when it comes to drifting exercises.

Also missed was the stunted “burp” between shifts that exits the exhausts while making full-throttle upshifts in the DCT M5. This sound certainly adds to the occasion, as does the lightening quick shift – if a bit delayed from input to completion. The DCT shifts very quickly, but not in sync with the paddle shifter. We applaud Porsche for getting it right with their PDK transmission: even the push-pull button actuation (which we strongly dislike) delivers instantaneous shifts where the M5 has some time lag. Yet again, I’ll illustrate it this way: when grabbing another gear in the M5, my fingers are back off the paddle before the shift begins. In the Porsche, as the paddle clunks into its depressed position, you feel the shift taking place.

Lap after lap, the M5 felt great, planted, fast. It felt natural to be rowing its gears, and what I traded in driftability, cool noises, and faster shifts, I gained in driver involvement and feel. I suppose, in a ‘fun-factor’, it’s a wash. 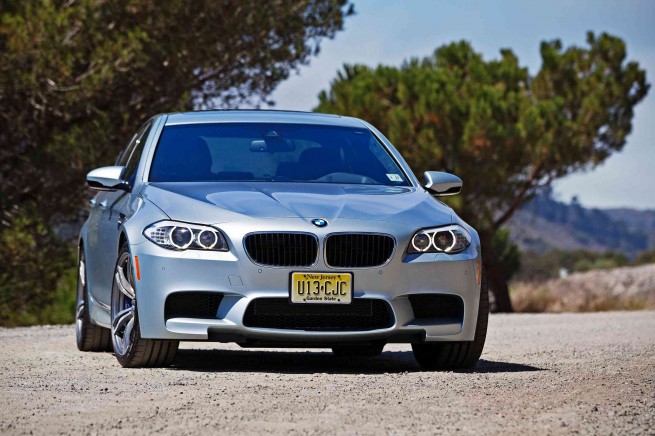 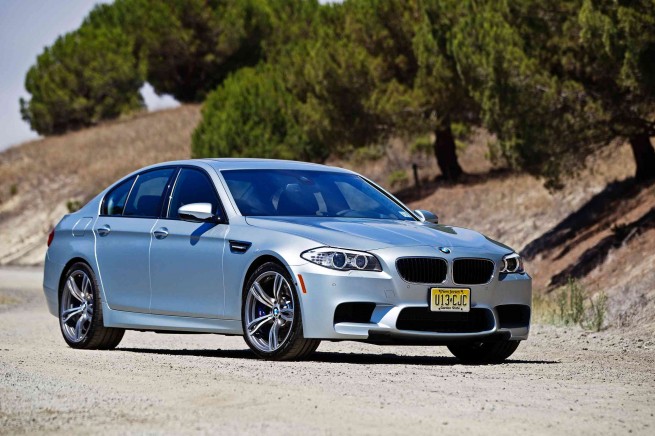 That brings us to our first moments in the manual M5 on the roads around Laguna Seca. I was off on a mission to determine how the manual M5 feels during normal driving. Having a manual, it immediately occurs that the M5 should feel extremely sporty, and it doesn’t. Setting off from a standstill, the very light clutch resistance feels at odds with the car – my notion is this: if you’re going to give it a manual, go all the way and give it a satisfying, stiff clutch. Yes, the downtown executive sort will whine that it makes their leg sore in stop and go traffic. But guess what: none of those buyers will order their M5 with a manual in the first place. I suspect a greater percentage of manual M5s will see track time and extreme back-road blasts than their DCT equipped brothers, therefore I suspect that most manual M5 buyers will agree that the clutch resistance could have been turned up a few notches.

That said, the gearbox feels great and the ratios are also well spaced for the road. Pulling the DCT paddles around town feels absolutely silly and redundant, hence you leave the DCT in automatic mode the vast majority of the time. This quiets down the M5 because the 4.4 liter’s titanic 500 lb-ft of torque comes on around 1,500 rpm, not far above idle, allowing the 7-speed to short-shift and mute the M5’s sound. If you want the engine to be audible, you’ve got to pull several downshifts just to hear the engine rev up. But doing this around town with the windows down makes you a total wanker searching for attention, looking at who’s looking at you. It all feels rather awkward and contrived.

The manual, on the other hand, has no such egotistical dilemmas attached. Like in any manual, you shift when it feels right to shift, and you predominately make that judgment based on sound. Hence, you tend to drive the car a bit more, even around town, because you’re always revving a little higher through each gear. In some way, it makes for a more exciting car. Yes, your fuel economy suffers, but if you are concerned about fuel economy whilst driving an M5, you have clearly made a poor purchase decision. Find yourself an M550d and learn how to draft.

Like on the racetrack, the manual M5 feels exciting and engaged while carving up back roads. But when the fun is over and it’s time for simple transportation, the manual M5 feels awfully out of sorts. After switching the steering feel, suspension damping and throttle response to their comfort settings, the supple luxury, quiet interior and soft ride felt at odds with the manual gear change. No matter how gently and smoothly I rolled on the throttle and released the clutch, I could never match the near-imperceptible, automatic-like shift change of the DCT. 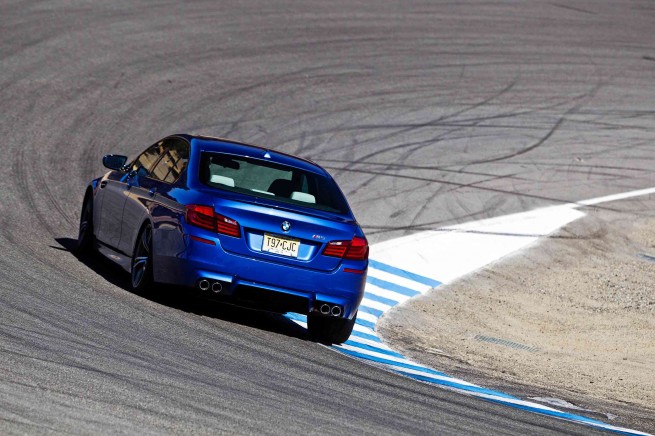 The M5 has been lauded for its two-car-in-one adaptability. When equipped with the DCT, it only takes the press of an M button to turn the M5 into a raging sports car, chomping at the bait, eager to unleash tire smoke, g-force, and speed; a press of the second M button and it settles down into a relaxed mood, ready to lazily lumber around in no hurry.

The manual-equipped M5 shows no such duality. It’s always the sports car, lunging forward through each gear, tugging on your passengers during downshifts, climbing to higher engine revs and making more engine noise all the while. Is it less of a car for it? I suppose that depends on what you expect of your M5. If it’s a Sunday driver, a track toy, a collector car – the engagement and romance of the manual is likely to win you over. But if your back-road blasts, track days and drift sessions are punctuated by grocery runs, soccer practice, and daily commutes, I say buy the DCT. You’ll have struck a shocking bargain: you’ll have bought a slightly shrunk 7 series and an M car, all in one. 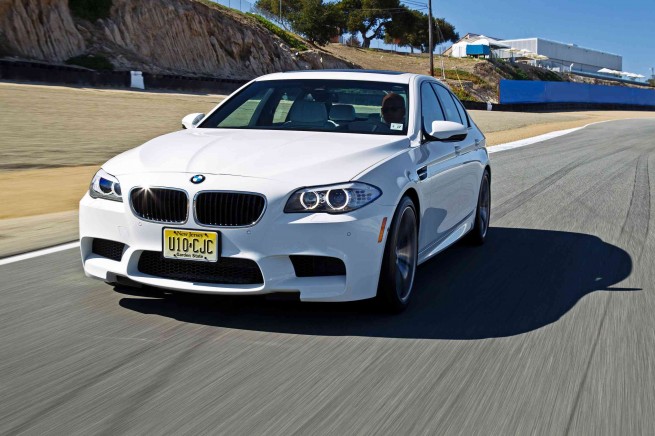