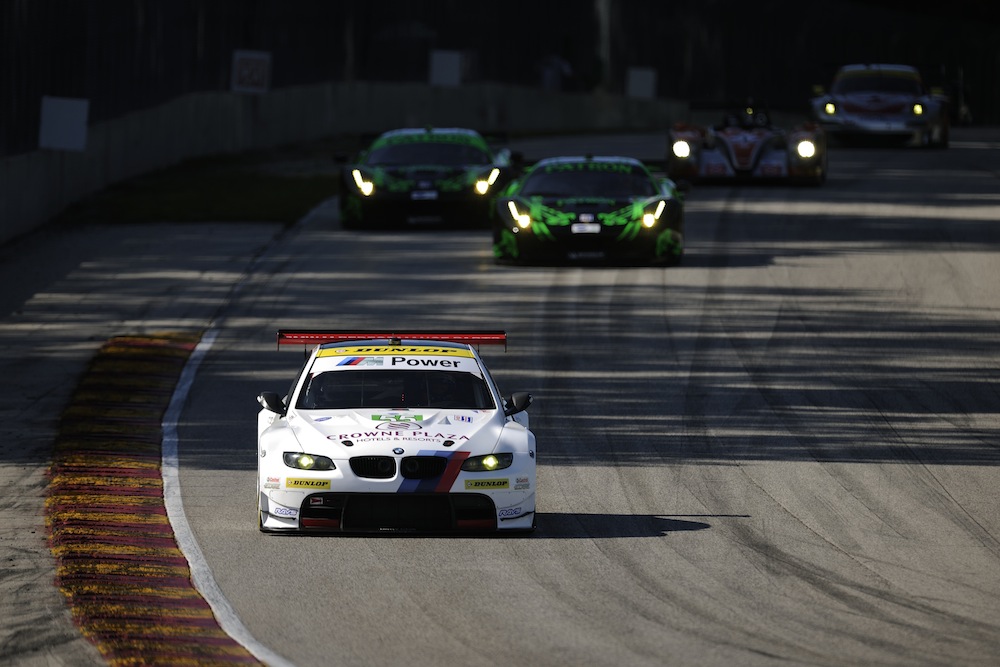 Today it was Bill Auberlen and Jörg Müller who took the GT class victory in the No. 55 BMW M3 GT, racing past the checkered flag 2.63 seconds ahead of the No. 45 Porsche and the balance of the 13-car class. The duo completed 97 laps of the 4.048-mile circuit in the four-hour contest. Auberlen, who took the program’s very first win here with Joey Hand in 2009, started the race from the fourth position. 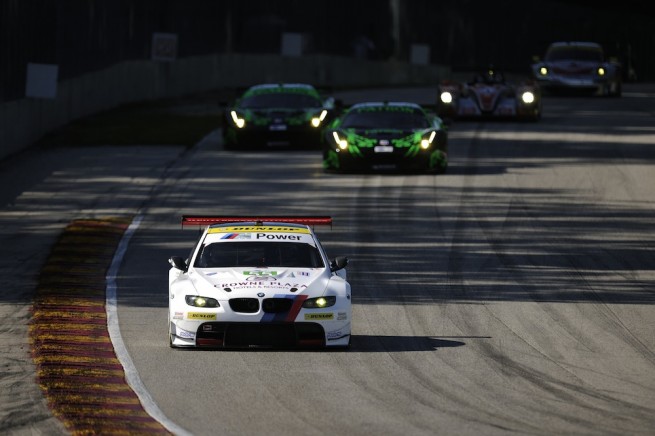 He drove the opening 21 laps before handing off to Müller just before the race’s first full-course caution period. Müller cycled to the front as the balance of the field pitted and then drove 30 laps before pitting from the fifth spot to hand the No. 55 machine back to Auberlen. The Californian was forced back to the pits only one lap later to tighten the left rear wheel. He returned to the race in 11th with only the Team RLL mantra “Focus Forward” in mind as he stormed up to fourth-place in 17 laps. Auberlen pitted on lap 76 for new Dunlop tires and fuel, returning in fifth and, as luck would have it, just before the race’s third full-course caution flag flew. With 38 minutes to go he cycled to the lead as the race went back to green. One more yellow flag slowed the race, but Auberlen was not to be beaten.

The No. 56 M3 GT of Dirk Müller and Jonathan Summerton ultimately finished 10th after Müller was forced off course by a competitor two laps before the finish and was unable to continue. The incident dashed team hopes for a 1-2 BMW finish as the cars had been running in that order near the closing stage of the race.

With two wins and four additional podium finishes in the first seven races of the season, BMW stands second in the GT Class Manufacturer points and BMW Team RLL is second in Team points. Dirk Müller falls to third in Driver points. Bill Auberlen and Jörg Müller move up one spot to fifth.

“I am really thrilled for Bill and Jörg,” said Team Principal Bobby Rahal. “In the last couple of years Bill has often been in the situation to win some races and got some bad luck. I am really very happy for Bill and really proud of the team. In Friday’s practice we were 2 seconds off the pace. Our engineers Jay O’Connell, Bruno Couprie, and Chris Yancher really went to work and made the right changes. I think we are still at a bit of a deficit against the Porsche particularly and the Corvettes, but today we had a really good strategy. When Bill had to go fast he did and he went really fast – kudos to him for doing a great job. I feel bad for Dirk and Jonathan as they were in a position to finish 1- 2 and were hit by both Corvettes. They severely damaged the #56 car. Frankly I am not sure it’s repairable. On that side of the equation I am very, very disappointed. But in the end we are one big team. Everybody worked really hard and we were able to bring it home.”

Bill Auberlen, driver No. 55 M3 GT – “These guys are awesome. It’s been a while since we were on top of the podium and we all deserve it. We were 2 seconds off the pace in practice and I knew the team would figure it out.”

Jörg Müller, driver No. 55 M3 GT – “Bill did a fantastic job. The team did their job so well and that makes us all proud to be a part of this win. This is everyone on this team’s victory. It was fun to be at Road America for my first time and the podium makes it sweeter. Thank you to everyone.”

Dirk Müller, driver No. 56 M3 GT – “I was running hard in P2 and was pushed right off the track. I hope the officials are aware of what happened. Congrats to Bill and Jörg for a very well deserved victory. We were on a 1-2 run and that would have been so fantastic for the championship.”

Jonathan Summerton, driver No. 56 M3 GT – “It was an exciting race. Dirk did a great job. I had a little mistake in the pit, but it is all part of the learning curve. It’s a shame the day ended the way it did.”

Round 8 of the 2012 American Le Mans Series, the Baltimore Sports Car Challenge will take the green flag at 4:30 p.m. ET on September 1st. Live streaming coverage is available starting at 4:15 p.m. ET on ESPN3.com. ABC television will broadcast the race at 12:00 p.m. ET on Sunday, Sept 2nd.