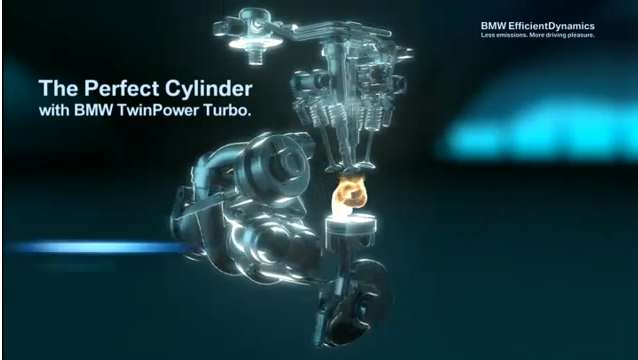 BMW is introducing its three cylinder engine to the public soon. They discussed this last year in conjunction with the common engine architecture at their Innovation Day. So why go to three cylinders? Well there are a number of reasons, packaging, less friction, and emissions control among them.

The three cylinder will run well with a mono-scroll turbo (think how the N54 had one small turbos on each bank of three cylinders). The exhaust won’t sound funky either, like an inline five does. And the three cylinder should not be mistaken for a ‘three quarter four’, it is anything but.

The three cylinder configuration has a packaging advantage over a four cylinder in a transverse engined front wheel drive chassis. It is narrower (side to side) than a four cylinder and will allow for a narrower body or a tighter turning circle, if the manufacturer takes advantage of it.

There are some easily resolved noise, vibration, and harshness concerns with a three cylinder. The three cylinder configuration has a natural tendency to rock, nose to tail. But that can be effectively counteracted with a balance shaft. BMW does have experience with three cylinder engines, the A40 motorrad engine found in the BMW K 75 comes to mind immediately. It used two counter-rotating masses to cancel the vibration. Regardless the three cylinder will be a smooth runner in keeping with BMW’s premium character.

Even given the mass of the counter-balancing, there is the benefit of friction reduction in a three over a four, for example (a four has to be balanced also, truth be told). To use a racing example, it was frictional loses that drove F1 to a V10 rather than V12, which would have been a better balanced engine, a number of years ago. And then there is the improved emissions based on a more efficient configuration. And that is the heart of EfficientDynamics.

The BMW three is built, along with a new set of four and six cylinder engines, to share a common set of components. There’s a 60 percent commonality between three, four, and six for gas engines (and a 40 percent commonality with the diesel equivalents). There are some real savings, from costs of parts to assembly processes, to be gained from increased commonality. The common cylinder takes advantage of all of the award winning EfficientDynamics features, including direct injection, Valvetronic, and VANOS. In addition turbocharging is included to increase the overall efficiency of the package.

The three cylinder engine will be matted to a new adaptive 8-speed transmission. Based on the current ZF 8-speed automatic, the new transmission utilizes a wide range of technologies, GPS mapping, DSC, wireless data connectiion, front and rear-mounted cameras and radar sensors, which all together can help the gearbox adapt its shifting pattern and power delivery to accommodate the road conditions.

That the i8 will have a turbo three gas engine speaks well to BMW’s ability to extract power from this configuration. BMW has built a sustainable roadmap for its inline engines that incorporates three, four, and six cylinder configurations. The 1.5L three will be the among them – a well built, efficient engine capable of powering some of BMW’s premium offerings. That it is good enough to be used in the i8 speaks to how highly BMW regards their ‘baby six’ engine.