BMW has just unveiled the facelifted version of the 7 Series flagship and this gives us the opportunity to compare it visually against similar offerings from Audi and Mercedes. The 7 Series LCI goes on sale this summer and will compete for the market against the Audi A8 and Mercedes-Benz S-Class.

Out of the three contenders, the S-Class is the “oldest” and after a seven year production cycle, it is set to receive a complete overhaul in 2013. The Audi 8, in its third-generation now, has the most updated design since it was just introduced in November 2009. The A8 aligned itself with the other models in the line-up, featuring similar design lines and carrying the front-end and headlights that became famous among Audi fans. 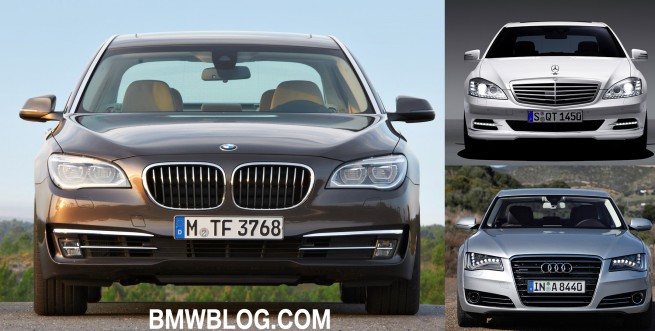 Inside, Audi once against stands out with its gadgetry and luxurious high-end materials makes the Audi one of the leaders in this segment.

The S-Class received a facelift in 2010. Daytime LED running lights were fitted to the outer edges of the bi-xenon lamp units. The rear end was accented with a total of 52 distinctively arranged LEDs in the two taillights. Gone are the body-colored strips through the tail lamps. Other noticeable changes at the front of the car are a more pronounced arrow-shaped grille, plus a new front bumper with a light-catching contour and a chrome strip below the cooling air intakes. New, sleeker rear-view door mirrors with LED turn signals were also added. Exhaust tailpipes of all S-Class variants were visibly integrated into the rear bumper.

The interior cabin continues to showcase the luxurious style Mercedes became known for.

Starting with July 2012 production, the 7 Series goes through life cycle impulse, both for the exterior and interior design. One of the biggest exterior changes comes from the front where now the flagship 7er gets “squarish” LED corona lights with an LED turn signal indicator placed in the headlight. Each headlight contains 8 LEDs.

While the previous model featured a kidney grille with 9 and 12 slats, based on the Night Vision Camera option, the facelifted 7 comes now with a single configuration of 9 slats. More chrome is now embedded in the fascia with two bars in the front apron that give the flagship model a more aggressive look.

As always, BMWBLOG gives you a photo comparison between the three models, along with a poll where you can cast your vote for your favorite car.