Ruminations On the Production BMW i8

Home » Models » BMW i » Ruminations On the Production BMW i8 The production i8 is about a year plus away from being unveiled. There’s a chance we’ll see first drive reports sometime in mid 2013. And of course the speculation regarding the production specs has started.

The question is, how far from the concept i8, being shown now, will the production i8 be? I believe that  from a structural-drivetrain
perspective, the concept is very close to what we should see in production. The gasoline engine is a turbo charged three cylinder. This is one of the new 500cc cylinder head engines. The HP rating is 220, which seems rather high for a 1.5L 3 cylinder, but it equates to about 147 HP per liter. High output, but not high output to the point of unreliability. (This engine, in a detuned state – say around 200 HP, will probably provide the motivation for the new BMW A & B class cars).

The gasoline engine will be mated to an automatic gearbox – and that probably is due to the need to keep tight control over both power sources (that are connected only via logic).

The logic determines when each drivetrain adds its output to the mix. The i8 can run on the electric motor only (FWD), the gasoline engine only (RWD), or both power sources together (AWD). It takes a fair amount of code to make the two power sources play well together, and that is the key to how the i8 works. 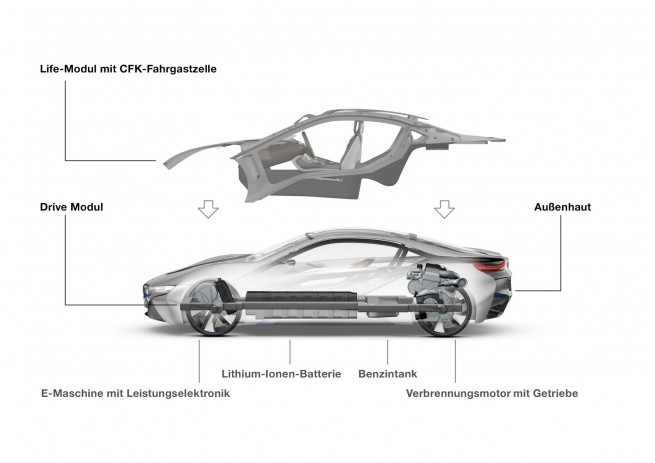 BMW hasn’t used aluminum as a structural component for it’s mainstream cars, though the Z8 was aluminum skin on an aluminum space frame. The i3 and i8, however, will have an aluminum based chassis.

But the chassis is an odd duck in the sense that there are aluminum castings, extrusions, and sheets. The extrusions provide side impact protection – they are specifically designed to provide strength in one dimension and also provide a crushable space in another, something that a casting is less capable of.

The i8 batteries are contained in an aluminum case that creates a spine in the center of the car. Under the rear seats is the fuel tank for the gasoline engine. The passenger compartment is made up of CFRP panels created using resin transfer molding process. And it’s the supply of the raw carbon fibers for the CFRP that will define production capacity for the i3 and i8 in the near future.

The SGL facility was chosen for its access to sustainable hydroelectric power (and for sustainable you can also read less expensive). The process of creating carbon fiber from a polyester thread is energy intensive.

That’s the hard part – securing the raw material in sufficient quantity and at a realistic cost to make the volume of cars BMW intends to build.

What is really appealing to me is that BMW is not using any one super exotic item (thought the CFRP panels seem to be) and yet it has an exotic aura – thanks to its dazzling design and strategic product placement. The price will be above $100,000 in the US market
(probably).

The weight of the organization is behind the i3 – that is the car to watch from a sales perspective, but there’s no denying the sex appeal of the i8 and the interest it generates for both BMW and the i sub-brand.