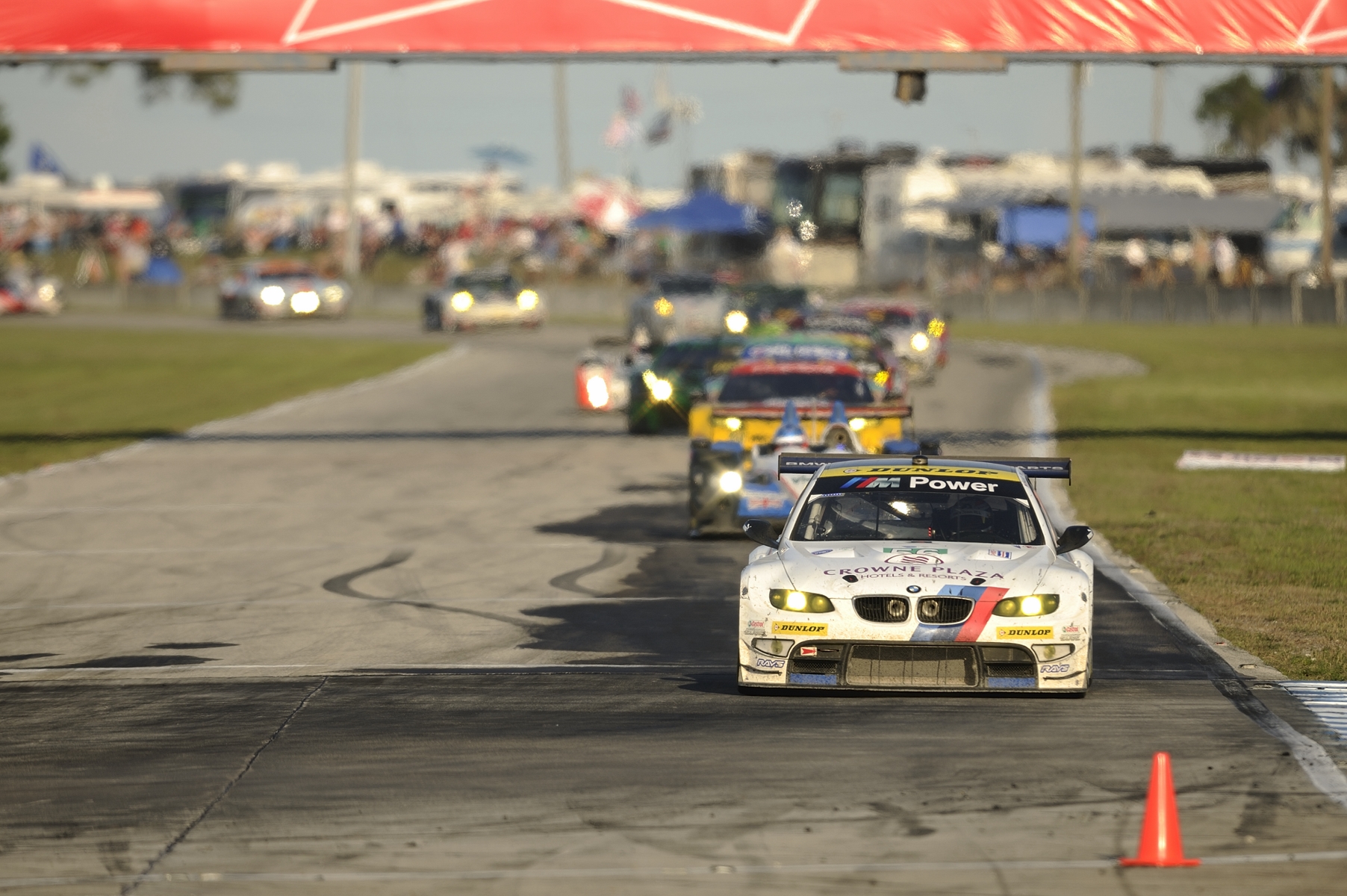 Sebring – March 17, 2012… BMW Team RLL had an excellent start to the 2012 American Le Mans Series season. At the 60th running of the 12 Hours of Sebring (US) the no. 56 BMW M3 GT claimed overall victory in the GT class after 307 laps of the “Sebring International Raceway” and a dramatic final stage of the race. Over the course of the thrilling marathon, Dirk Müller (DE), Joey Hand (US) and Jonathan Summerton (US) shared the driving duties. Last year, Müller and Hand (along with Andy Priaulx) crossed the line as winners in the BMW M3 GT at the season opener. 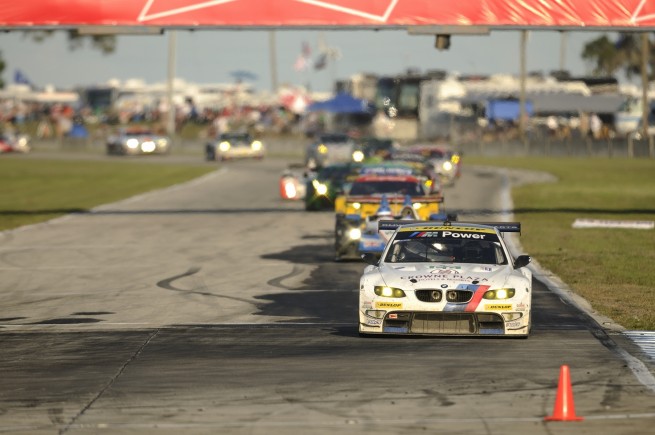 Summerton experienced a perfect debut in sports car racing by making it to the top step of the podium. With today’s win, a BMW M3 has now emerged victorious in the GT class of this event for the fourth time: 1997, 1998, 2011 and 2012. BMW claimed overall victory in 1975 with the BMW 3.0 CSL as well as with the BMW V12 LMR in 1999. With BMW M celebrating its 40th anniversary this year, this historic win comes as the perfect present.

In contrast to many of their competitors, the BMW drivers managed to keep out of any turmoil in the first half of the race. Their BMW M3 GT cars enabled them to clock consistent lap times, keeping in touch with the front-runners throughout the race. As the race developed, a gripping duel between BMW Team RLL and the two Chevrolet Corvettes kept the fans on their feet, all four cars only seconds apart for several hours. More than ten full-course yellows kept the GT field close until the closing stages of the contest. Only in the dying moments of the race were the BMW drivers were able to seal their second consecutive Sebring GT win. Both Hand and Jörg Müller were both victims of contact in the final minutes of the race. While Hand successfully defended his lead despite driving a heavily damaged car, Jörg Müller lost third position in the ALMS class.

Last season BMW Team RLL won the ALMS GT drivers’ championship as well as the team and manufacturer titles for the second consecutive year. Round two of the 2012 American Le Mans Series with be held at Long Beach (US) on 14th April.

Jens Marquardt (BMW Motorsport Director):
“This is a very emotional victory for us. We didn’t have an easy race, but encountered a couple of issues. However, the team stuck to its plan and kept their cool. Everyone worked fantastically together, the drivers gave their all until the very final lap. Especially the fight with the two Corvettes delivered pure excitement for several hours. It’s these tough fights that make the ALMS so special. It’s been a great race, from the first to the final hour. Our team can be really proud of this victory.”

Bobby Rahal (Team Principal):
“This was far from easy today. We had to cope with several issues and had to pit out of sequence. Luckily the yellows saved us on a number of occasions. I have to give a lot of credit to Dunlop. We went far longer on the one set of tyres than we ever had. This victory feels really sweet. Our drivers formed a very good combination and deserved this strong result at the beginning of our 2012 campaign. All the work put in by BMW Motorsport and our team over the winter paid off.”

Dirk Müller (BMW M3 GT – No. 56):
“This is unbelievable! It’s hard to believe that we really succeeded in repeating last year’s win. Although we suffered some minor problems over the course of the race, we kept our cool and kept pushing together. Especially during my second stint my car really felt like a rocket – and I managed to gain several positions. I have done so many races, but seldom felt as comfortable in the car as today.”

Joey Hand (BMW M3 GT – No. 56):
“After my very long final stint all I can say is this: Once more I put everything on the table. Now I feel really exhausted, but obviously very happy. My left knee aches from braking. My tyres had hardly any grip left but I knew that we could make it. We didn’t have the ultimate performance today, but our consistency and our great pit stops had already been our big strength last season. This was the same today – and now we can celebrate.”

Jonathan Summerton (BMW M3 GT – No. 56):
“If anyone had told me I would be able to celebrate victory with the guys after my first race in the BMW M3 GT, I wouldn’t have believed him. BMW Team RLL knows everything about this place. They know exactly what they do in any situation. The same goes for Joey and Dirk. I couldn’t have asked for better team-mates. They made me feel at home from the very first moment and supported me in all areas. Being with this team for this race is the best that could happen to me.”

Jörg Müller (BMW M3 GT – No. 155):
“This has been my first 12 Hours of Sebring since 2001. The race was tough, with a jammed-packed field. The car felt great over the whole weekend, and I particularly liked my long stint in the dark. Right until the final stage of the race I had a podium finish in sight, but then I was hit and dropped back. I’m disappointed, as we could have finished better.”

Bill Auberlen (BMW M3 GT – No. 155):
“Ahead of the first race of the season you never really know where you stand. And even after the first few hours of the race this wasn’t clear. Then it turned out to be a tough two-way fight between the Corvettes and us. This was great fun. I have been racing here for 25 years and every year Sebring is something special.”

Uwe Alzen (BMW M3 GT – No. 155):
“This was a very tough race, and this circuit is a huge challenge. However, this goes for all drivers out there. It was really hard to overtake, and the traffic was extreme, but as our pace was excellent. We managed to do really well. This result is a very nice reward for all the hard work put in by the whole team over the past weeks and months. It was great fun racing here again after all those years.” 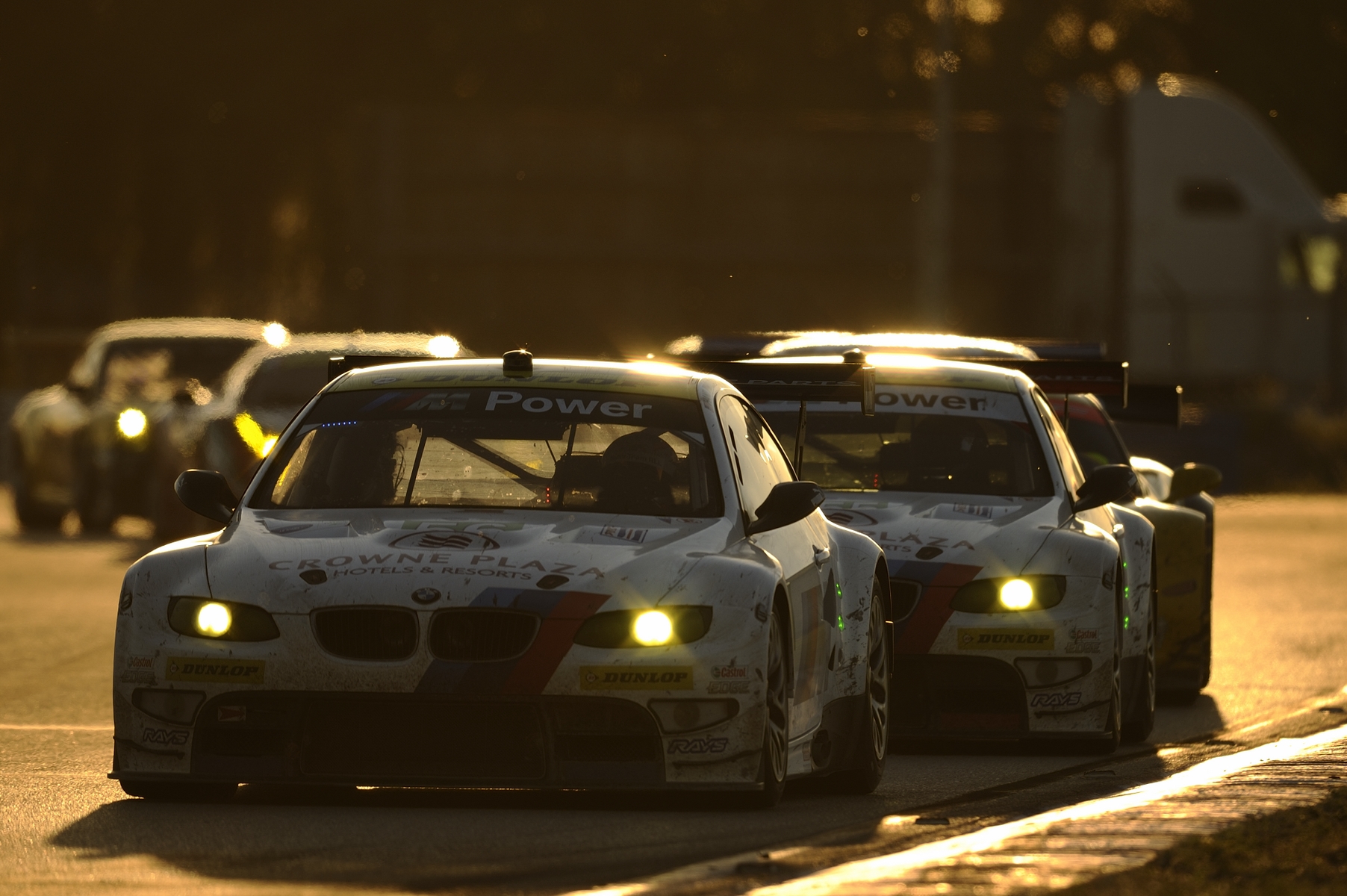 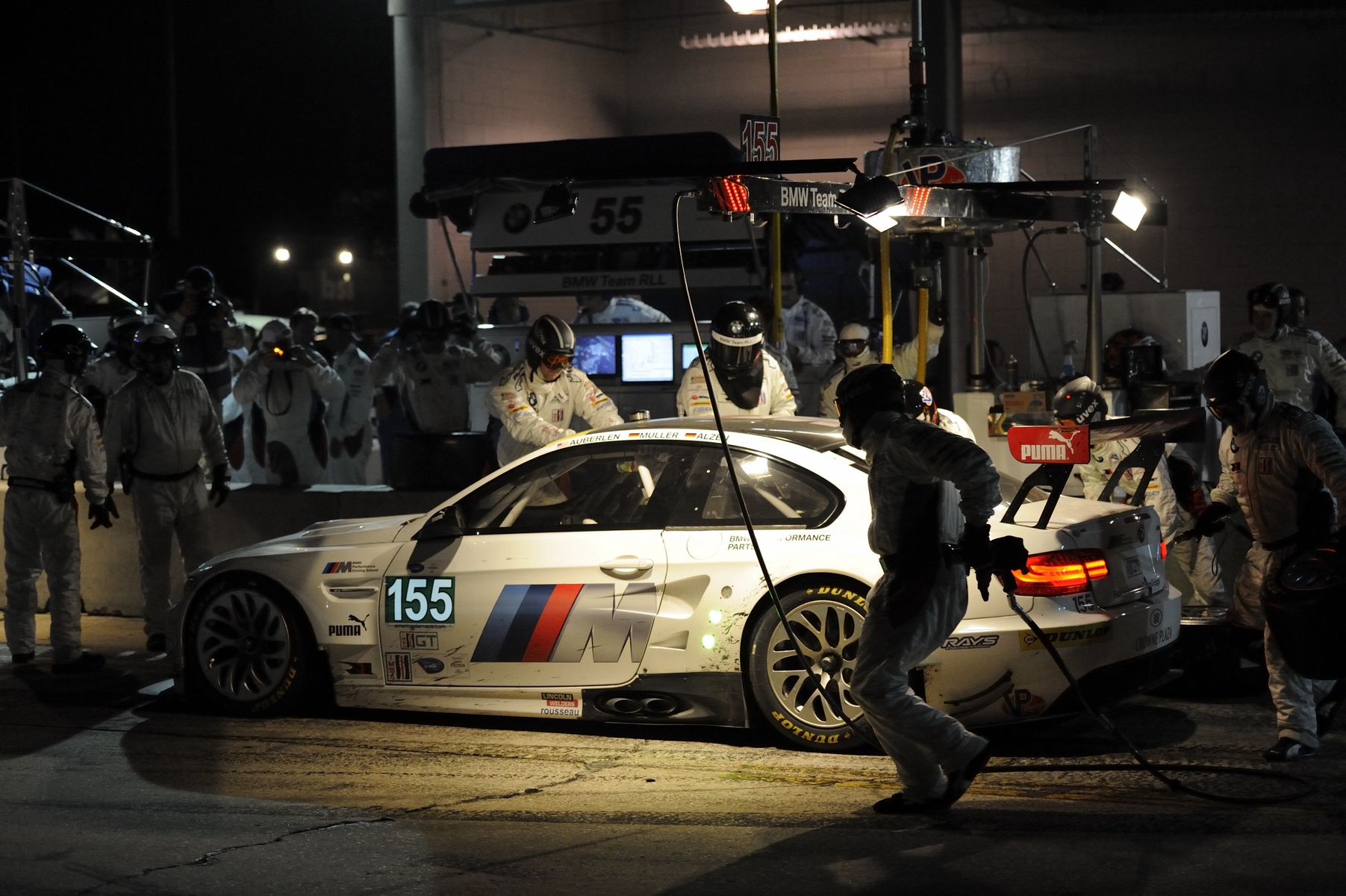 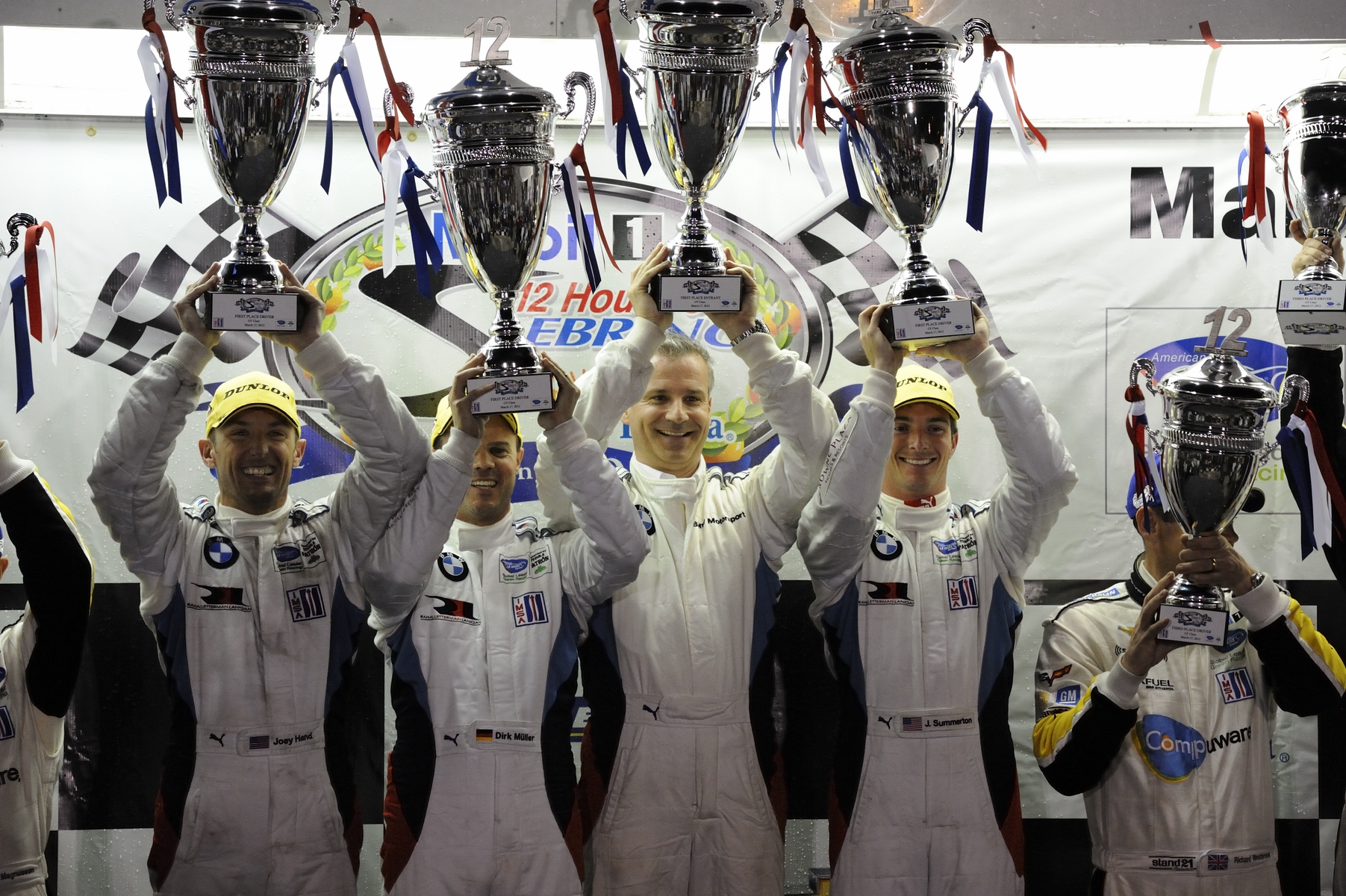 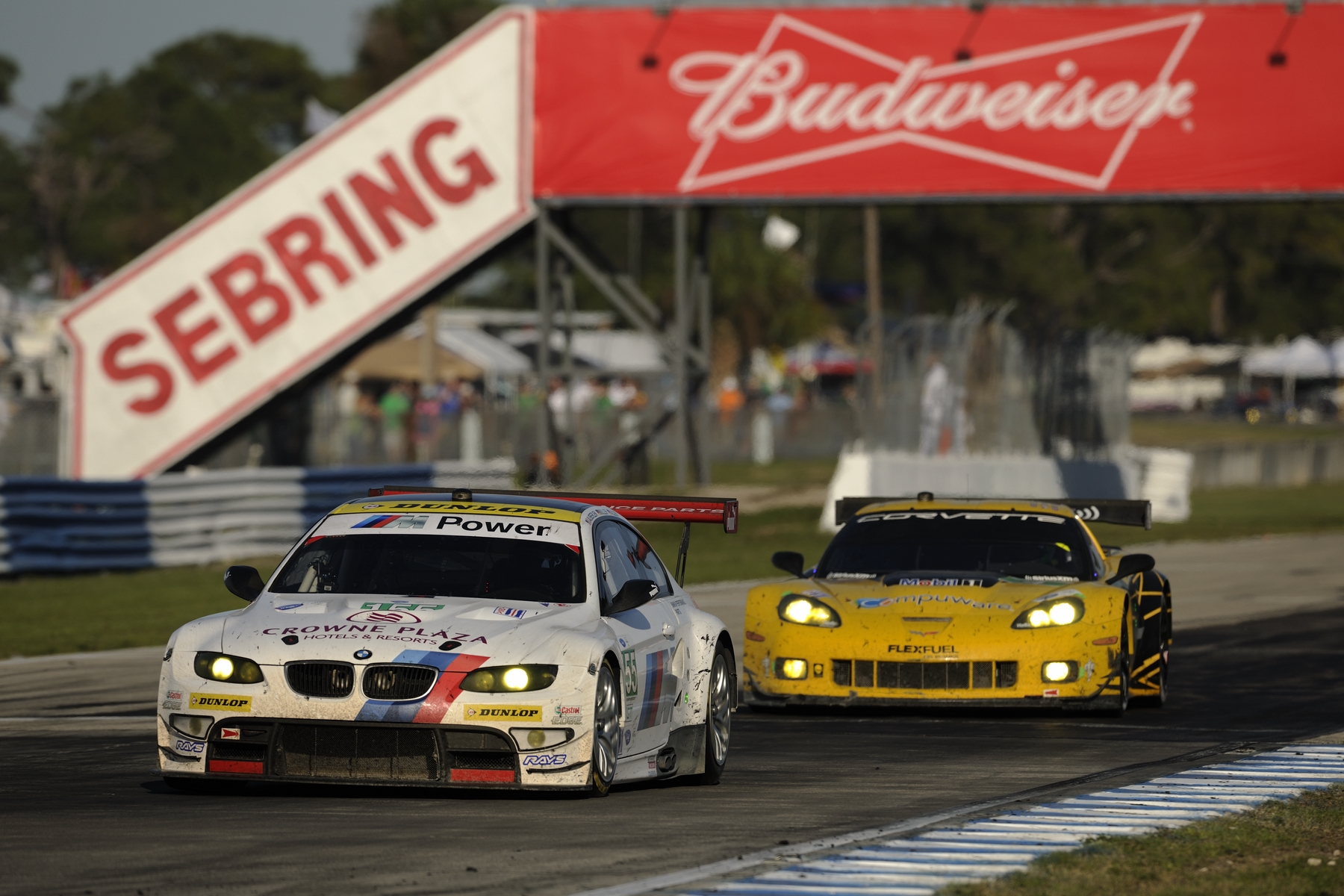