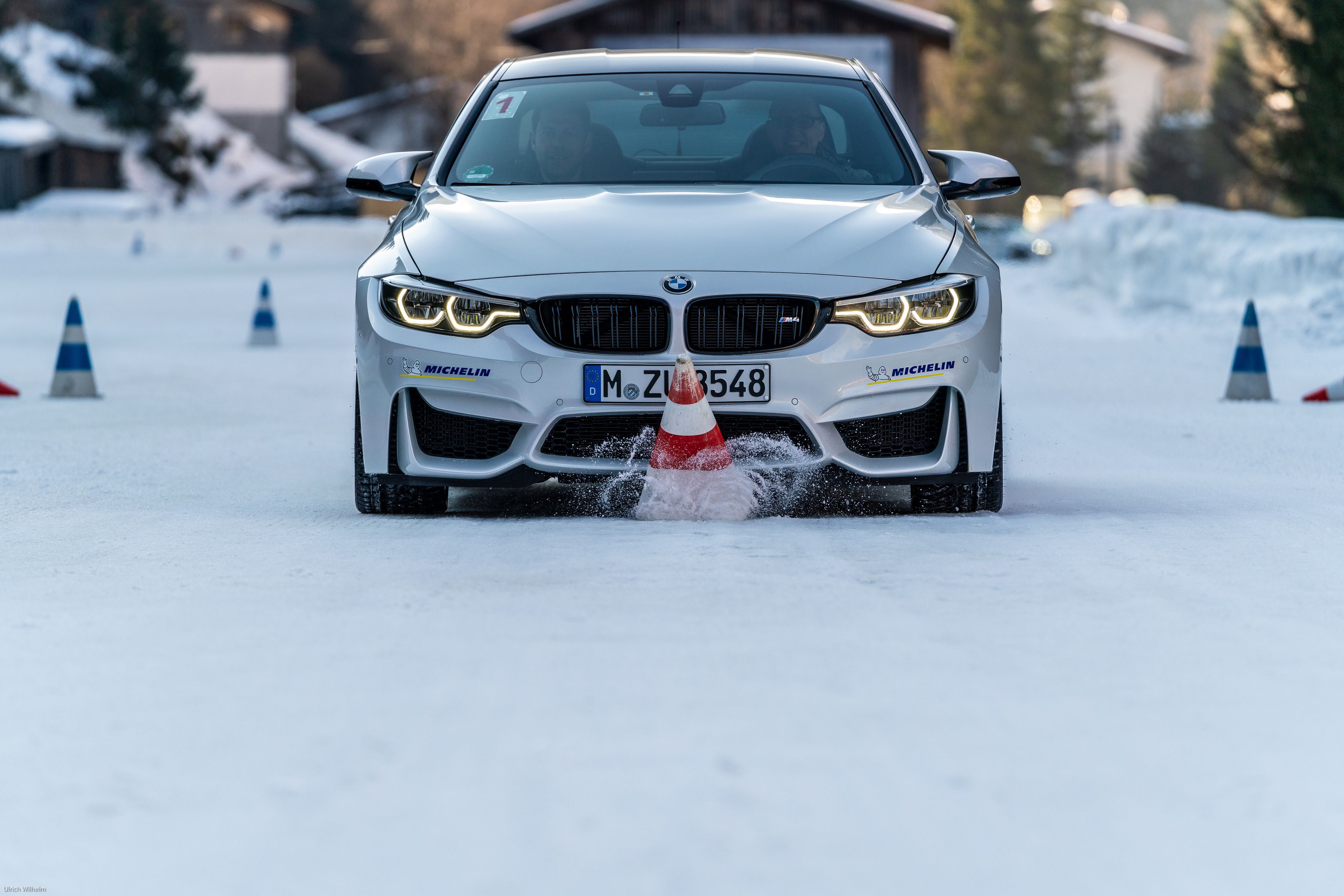 There was no need for coffee at 7:00 am while en route to Bridgestone’s winter driving school. No amount of caffeine could possibly match the waking power of following an Audi R8 and Porsche 911 in caravan down twisty roads leading to the entrance of a decommissioned Formula 1 racetrack – while driving a spanking new M3.

Arriving fashionably late (sorry instructors! We’ll blame it on the Audi’s Navi…) we took our seats and settled in with refreshments for a discussion of car control, the physics of driving at the limits of grip and finally, tire technology. None of the presentation was boring in the least – but rather engaging and interesting, regardless of skill level and experience.

I must admit, I learned something new – and not to sound arrogant on the topic of tire tech, but I’m rather well versed. What I learned was that there is another function of tire tread that I had (somehow) overlooked and never considered before. Tire tread, as defined by the diagonal groves in Bridgestones RE-11 performance tire, for example, serve the purpose of diffusing heat, cooling the tire. Wow. There’s an epiphany.

I’m still a little embarrassed I’ve never thought of that, but heat dissipation is extremely relevant in the world of high performance tire design – in fact a tire’s temperature rating and ability to handle high temperatures is central to its performance. Think of the blistering that occurs with modern Formula 1 tires – this degradation of the tire is caused by heat, secondary to abrasion with the road surface. Once the blisters surface the tire falls away, and the driver must slow down to manage what’s left of his tires.

Coincidentally, I learned something else about Bridgstones, specifically the RE-11. I learned that the outer half of its tread pattern was taken directly from Bridgestone’s last F1 rain tire design. There is a “cool factor” there that I cannot help but succumb to – I’m curious to see how the RE-11 performs on a wet racetrack.

After a thorough classroom session that got our heads wrapped around the skills we were about to practice, we set off for the skid pad, and a wide-open cone course. Hard acceleration, braking, cornering, and combinations thereof were on the menu, and with the tarmac wet in most places, and partially covered in snow, frequently changing traction coefficients across the surface made for a steep learning curve. I was caught out more than once by a slippery patch while slaloming – and to keep things interesting the Bridgestone team kept moving one cone much closer or further away which made for greater challenge.

A large circular skidpad was employed to help students learn how to control understeer and oversteer. Howling tires were heard over revving engines, and our sports cars were right at home. Driving rear, mid and front engined sports cars back-to-back through these exercises really demonstrated what makes a 911 a 911, an R8 a R8, and an M3 a playful M3.

After all had finished their skid pad and cone course exercises, we headed in for lunch and another tire tech talk – this time highlighting the differences between summer performance, all season, and winter tires. The food was tasty and served in good company with many great conversations breaking out around the table. A nutritious salad and deserts rounded out our lunch.

Finally, we were off to the track for open lapping. Prior to open lapping, the instructors showed us the line and helped every student to feel comfortable behind the wheel. We were lapping Mosport’s Driver Development Training track (DDT for short), a 16 corner 2.4 km circuit. One of the best aspects of the DDT track is its elevation changes, the climbs and drops in the track make for a more challenging lap wherein the driver must remain ever-mindful of weight transfer.

As if the Bridgestone folks made a deal with their maker, it began to snow exactly half way through the day, meaning that a wet track surface gradually became a slushy, then snow-covered track surface – deep enough to bring speeds to a much slower pace. Of course, the learning and fun continued thanks to – not despite – the weather.

Moral was high and all students present had a blast. I personally enjoyed engaging with the instructors present, all of whom “knew their stuff” and were very friendly throughout the day.

If you or someone you know is feeling a little out of place on winter roads, why not sign up for Bridgestone’s winter driving academy? For more information or to sign up for a course, hit the jump.

BMWBLOG would like to thank Bridgestone Driving Academy for having us for their winter driving school and allowing us to unleash 3 sports cars in a winter wonderland!

For a better look at our time on the snow-covered racetrack, check out the video link below!